However many times you have been, there’s a dream-like quality to Venice.

For first-timers, it’s like you’ve been here before, its key ingredients belonging nowhere else, so familiar from films, books and countless cultural references. For those returning, its maze of alleys and bridges seems to have twisted since you last mastered them, leading you on paths anew.

Being there this year seems particularly like a dream, after so many long months stuck at home. You want to pinch yourself that this jewel of a city is still here, still waiting for us, that such things endure despite the calamities of the moment. 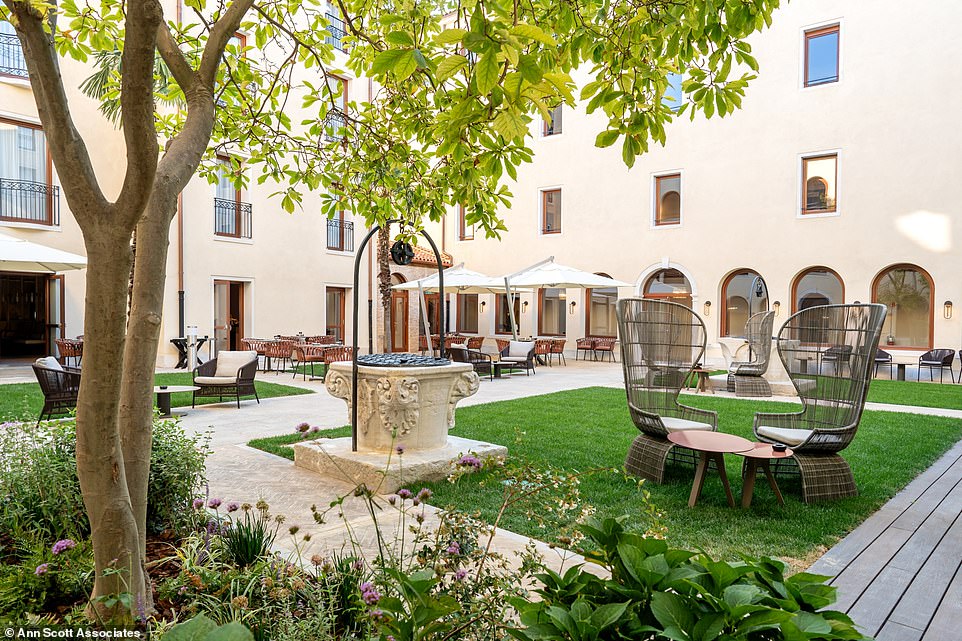 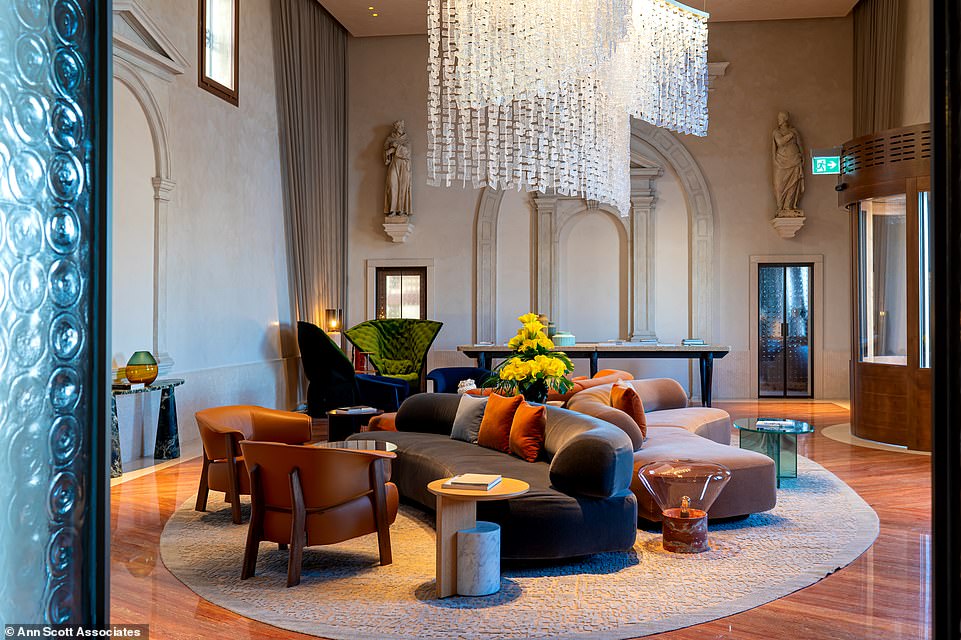 ‘Stepping inside, you’re immediately struck by how bright and airy its interiors are,’ says James of the hotel

Given all this, when visiting Venice, you really want lodgings that are conducive for dreaming. This was seemingly the mission of the team who, over the past two years, have created the remarkable new Ca’ di Dio hotel, situated on a prime stretch of waterfront, a few moments’ stroll from St Mark’s Square, with a hopping-off stop for the public transport ‘vaporetto’ boats right outside.

Remarkably, they have created a haven that draws together so many of the signature elements of this vibrant city but also sets you apart from the busy tourist bustle so synonymous with Venice.

After several hours trotting round the canals, gawping at palazzos and gallerias, you long for a little respite, a moment to laze, daze, and reflect on your day’s discoveries. A lot of the accommodation in Venice doesn’t fully permit that, much of it stuffed between winding waterways, with most bedrooms feeling rather lightless and confined.

Ca’ di Dio benefits from being a short walk down the grand promontory from St Mark’s towards the gardens where the iconic Biennale of art and architecture is always held. You literally pass the last of the tourist trap bars, and there greeting you, like a welcome exhalation, is the broad, ivory-toned frontage of the hotel. (Its significant width means a fair proportion of its 66 bedrooms look out onto the water.) 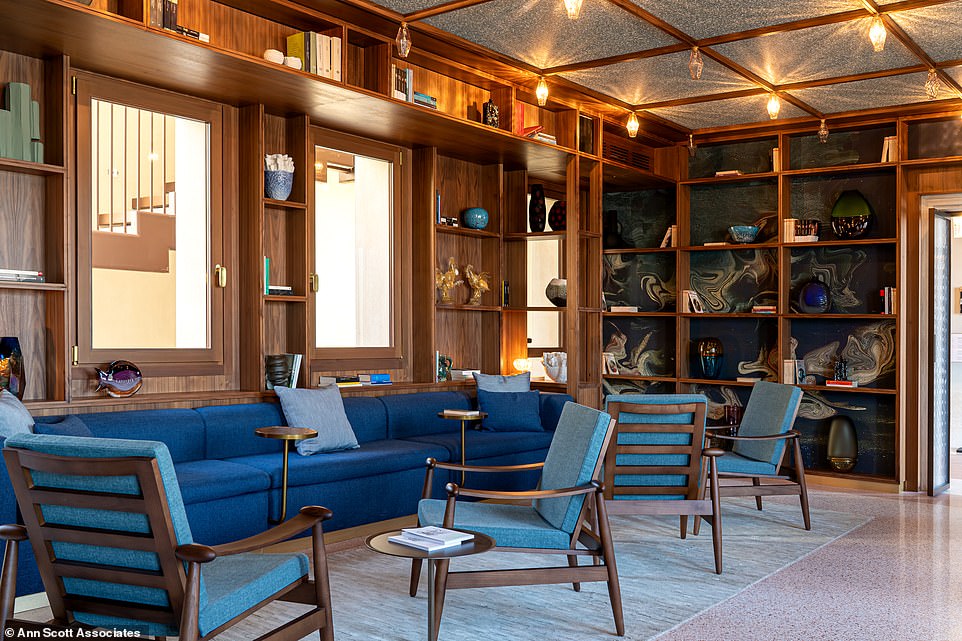 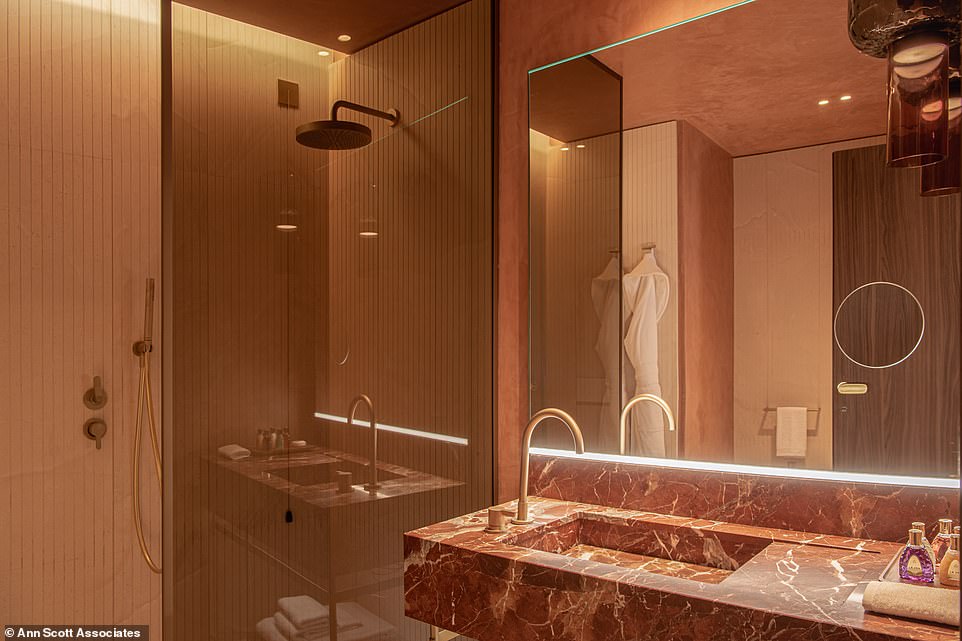 The executive suite bathroom. There are lots of salmon-orange tones in the hotel’s colour palette, James notes 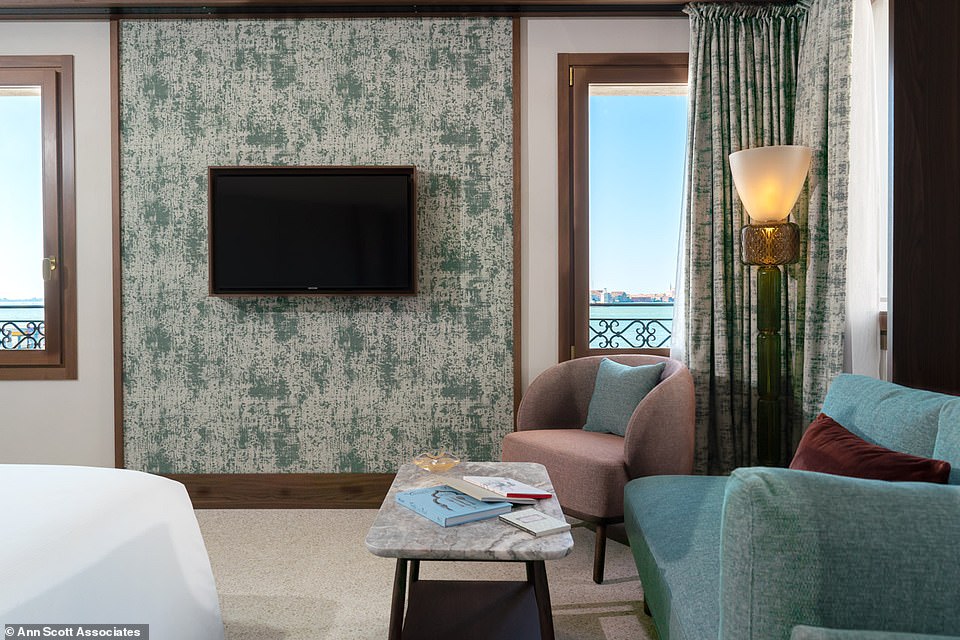 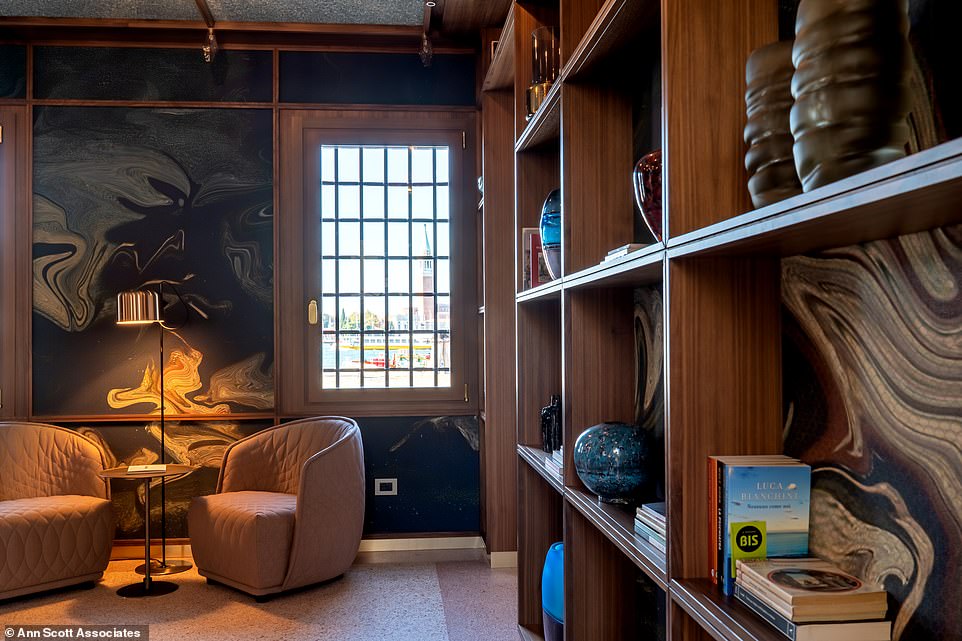 James says of the interior: ‘Such spaciousness seems almost un-Venetian, and yet its clever designers ensure the best of the city is stylishly present’

Stepping inside, you’re immediately struck by how bright and airy its interiors are. Such spaciousness seems almost un-Venetian, and yet its clever designers ensure the best of the city is stylishly present.

As regular visitors will know, Venice veritably groans under the weight of so much tacky gift-shop glassware, purportedly from the adjacent island of Murano, yet most of it likely from China. Ca’ di Dio has the real deal: choice artefacts that instantly reinstate my regard for Murano. Every Venice hotel has a chandelier, but here it’s a snowdrift of frosted shards, evoking the glinting froth that the gondolas cast across the canals.

Think of Venice and two colours come principally to mind: the salmon-orange of the brickwork and sunsets, and the sage green teal of the lagoon itself. These abound in the hotel’s furnishings. It’s a simple concept, so stylishly fulfilled. The synergy is complete from my corner suite where I relax on a sumptuous bed admiring how the interior shades of the room match the tones of the famous San Marco and San Giorgio bell towers, both visible from the windows. 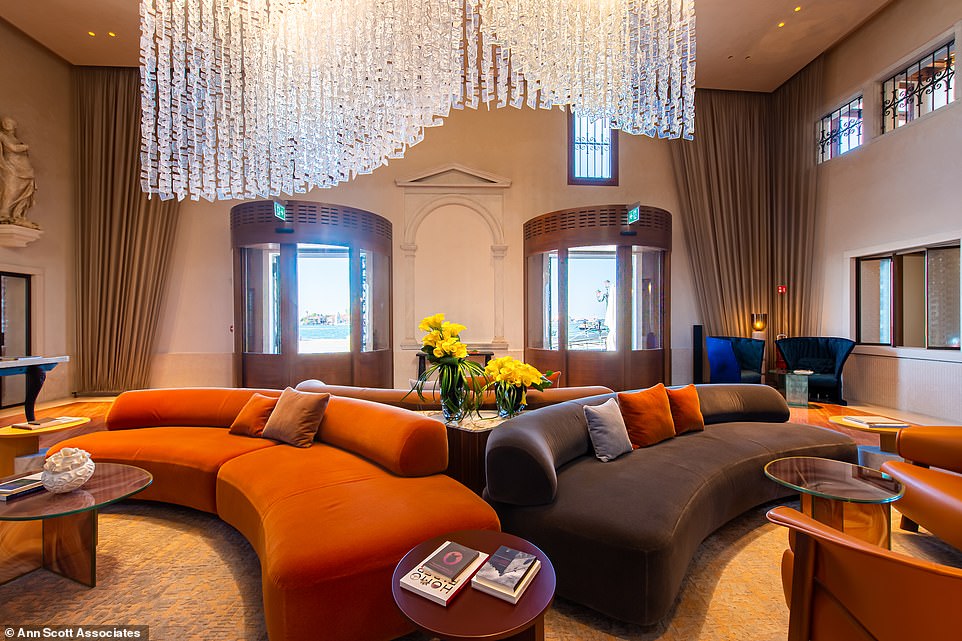 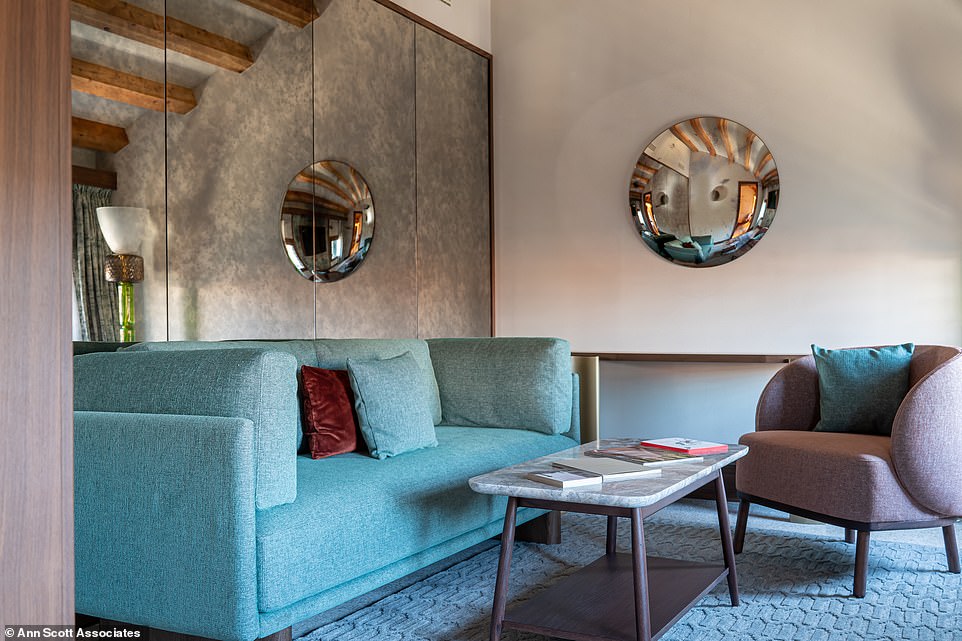 Directly outside the hotel, there’s a hopping-off stop for the public transport ‘vaporetto’ boats 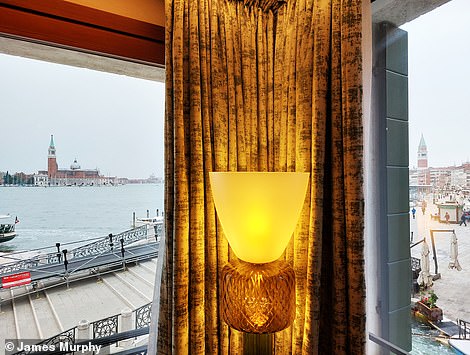 The view from James’s bedroom window. The famous San Marco (right) and San Giorgio (left) bell towers are both visible

Such class and comfort extend to an exquisite library fashioned for further relaxation, to the plush cocktail bar Alchemia, and to the vast internal courtyard, laden with parasols and luxurious armchairs, just waiting to be populated with a glamorous crowd come the next Biennale.

There is of course an opulent spa too, for those in need of extra attention to ease aches after parading round the city’s treasures.

Equally reviving is the hotel’s principal restaurant (one of two) named VeRo, short for ‘Venetian Roots’. It’s perhaps here that the hotel’s whole endeavour is most perfectly distilled: a twist of innovation yet Venetian in its roots.

My meal kicks off with a cocktail, mixed at my table. Instead of the overly-familiar Aperol Spritz, this one is conjured from Select – a sweeter, gentler aperitivo you won’t find in Asda – plus a splash of local sparkling wine instead of Prosecco, and an elegant halo of dried orange. Delizioso. 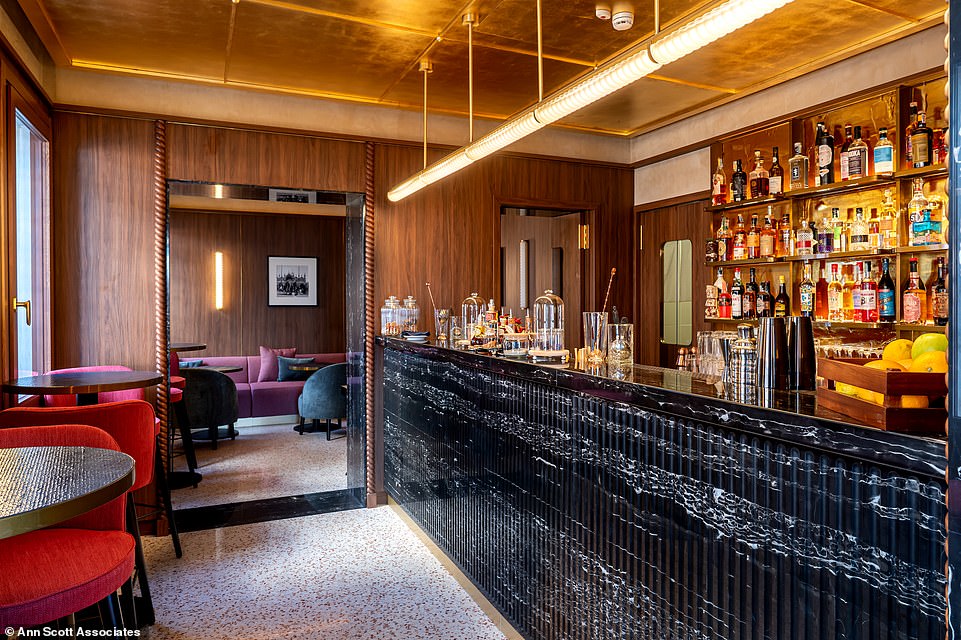 Pictured above is the hotel’s plush cocktail bar, Alchemia. During his stay, James enjoys a ‘delizioso’ concoction of Select (a sweeter, gentler aperitivo you won’t find in Asda), sparkling wine and dried orange 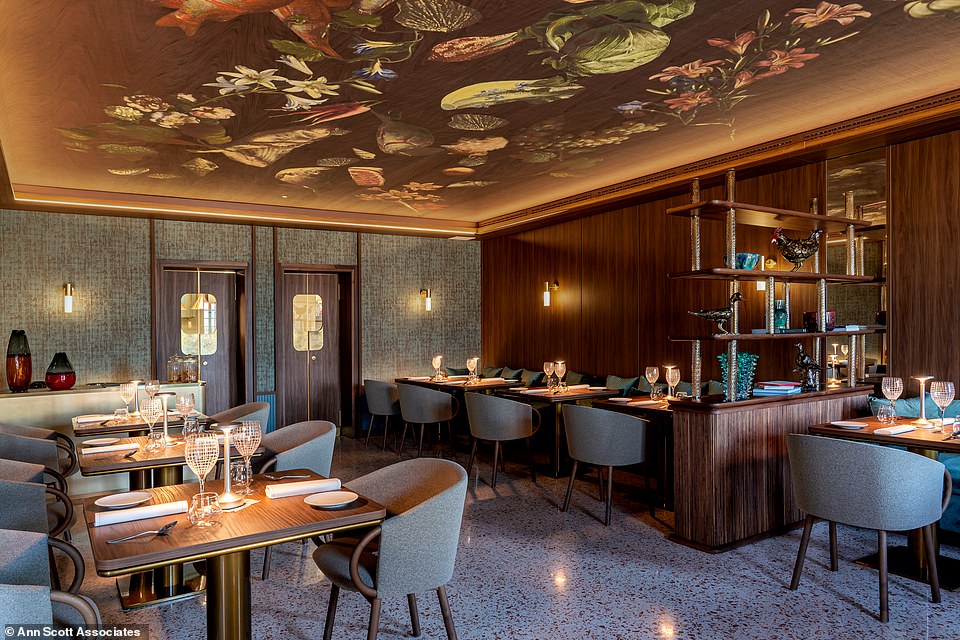 The hotel’s principal restaurant, pictured above, is named Vero, short for ‘Venetian Roots’ 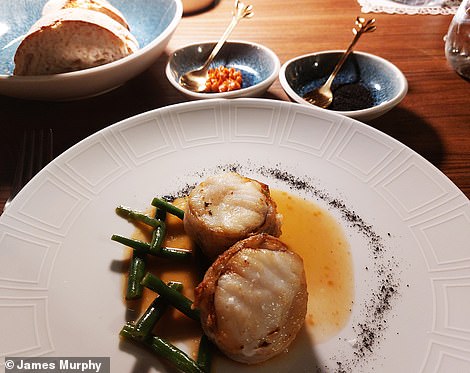 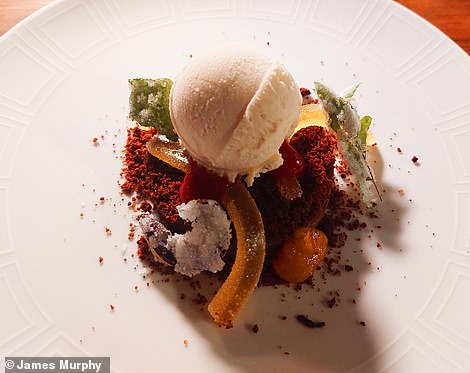 Pictured on the left is James’s order of monkfish, elegantly wrapped in prosciutto. ‘What makes this dish zing is the little bowl of powdered black squid ink I’m instructed to sprinkle atop it,’ he says. On the right is James’s portion of Sachertorte, which he describes as an ‘all-out flavour fresco, with chocolate in multiple forms, candied chestnuts, bitter orange marmalade, tangy citrus jellies, and sugar-frosted lemony herbs plucked from the hotel’s own kitchen garden’ 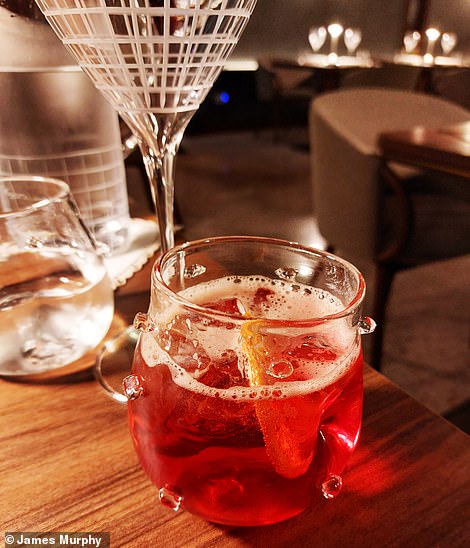 The cocktail that James’s evening meal begins with, mixed at the table

To start, I order the Venetian fish soup: stacked slivers of sea bass and home-made gnocchi bathing in a punchy, piping hot broth. Then I order the monkfish, elegantly wrapped in prosciutto.

So far so Venice, but what makes this dish zing is the little bowl of powdered black squid ink I’m instructed to sprinkle atop it.

This may as well be gunpowder, given how my taste buds explode. Around the restaurant, I see other diners dusting their own meals with intriguing little powdered compounds, clearly a trademark flourish of executive chef Raimondo Squeo.

Then comes dessert. I opt for the Sachertorte, something you’ll find in its traditional form in the overpriced cafés of St Mark’s Square.

Here I get the culinary version of the Tintoretto paintings I’ve admired earlier in the day at the Schola Grande: an all-out flavour fresco, with chocolate in multiple forms, candied chestnuts, bitter orange marmalade, tangy citrus jellies, and sugar-frosted lemony herbs plucked from the hotel’s own kitchen garden. Hands down, dessert of the decade. 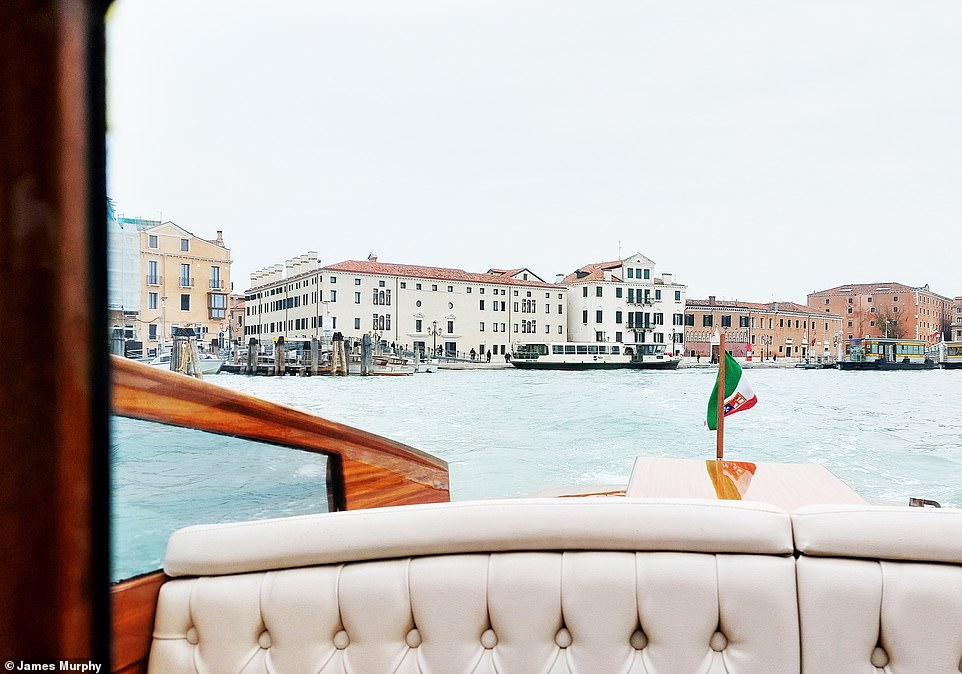 The view of the hotel from James’s departing water taxi. He says of the hotel’s staff: ‘How attentive they all are in making me feel welcome and comfortable’ 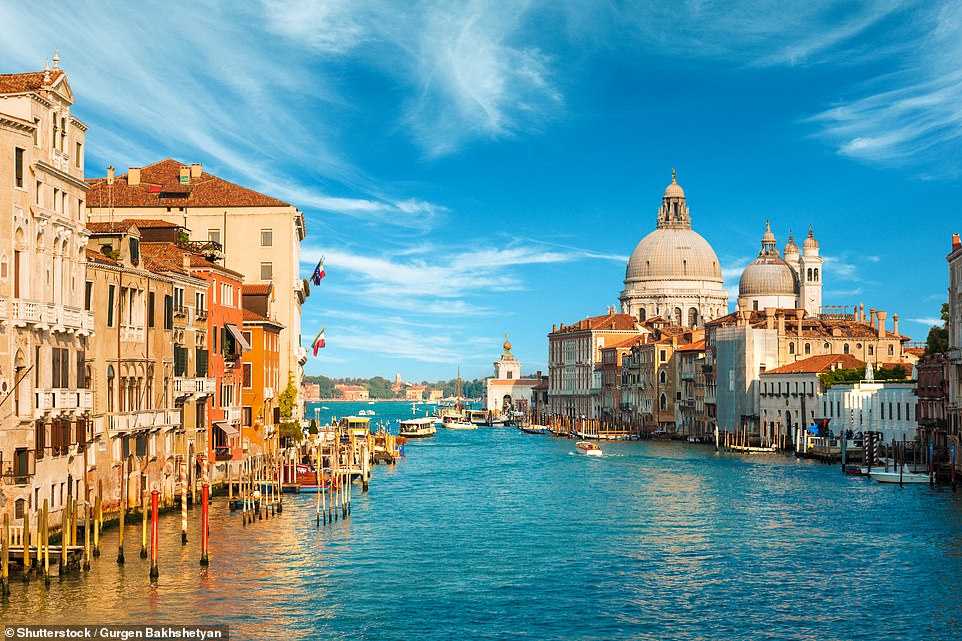 ‘However many times you have been, there’s a dream-like quality to Venice,’ James says. Pictured is the city’s Grand Canal

Junior suites at the Ca’ di Dio hotel in Venice cost from £284.

Coming back to earth for a moment, the kitchen garden represents a key principle of Ca’ di Dio. Across the board there’s a sincere concern for sustainability, so herbs are home-grown, food is locally-sourced, little is printed out if it can be supplied digitally, and even the air-conditioning runs on water recycled from the lagoon.

Such touches you may not instantly notice, but they are illustrative of a care and consideration central to the hotel’s ethos, that also abounds among the staff.

How attentive they all are in making me feel welcome and comfortable: and not just me, given I’m writing about the place. In the bar, other guests tell me they feel exceptionally well treated too.

Ca’ di Dio, short for Casa di Dio, means House of God. There’s nothing explicitly religious in it today but over the centuries it has been a refuge for women, for old people, and a hostel for pilgrims.

Sitting here, as the waves slosh against the gondolas outside, while the barman sloshes another alluring mix of spirits in his cocktail shaker, one cannot help but feel… serene. What else should one hope to feel in the city they famously call La Serenissima?