Moreish Mauritius! It’s long been a favourite for winter sun – and this glorious Indian Ocean island has never been more enticing

Women are shoving thick bunches of herbs into bags, wooden crates overflowing with sour green papaya are being wheeled through the market’s crowds and little girls in colourful saris sit on towers of textiles playing on their phones.

Nearby, a man with a machete is slicing coconut on a tree stump, his foot swathed in plaster and a plastic bag — clearly recovering from a recent machete-coconut injury.

Even under our face masks, the scents are unmistakable. We take in wafts of bright red tomatoes, sweet basil leaves and fresh mint as we walk through the endless stalls to the soundtrack of boisterous shopkeepers shouting over one another in that distinctive French-African accent. 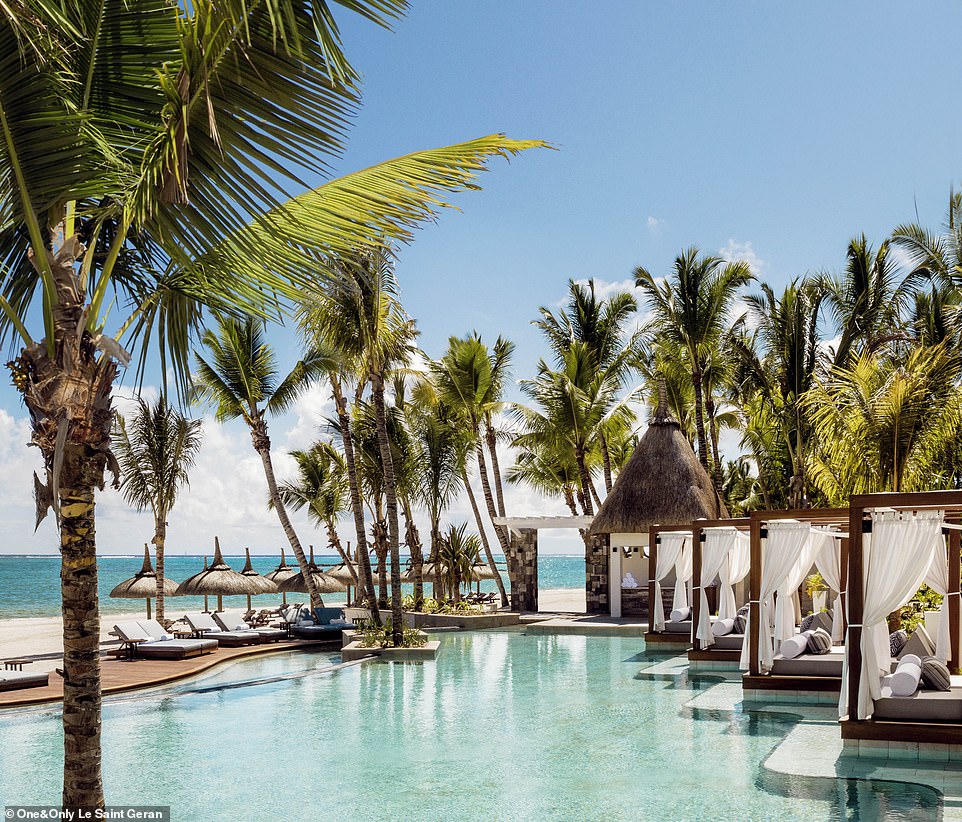 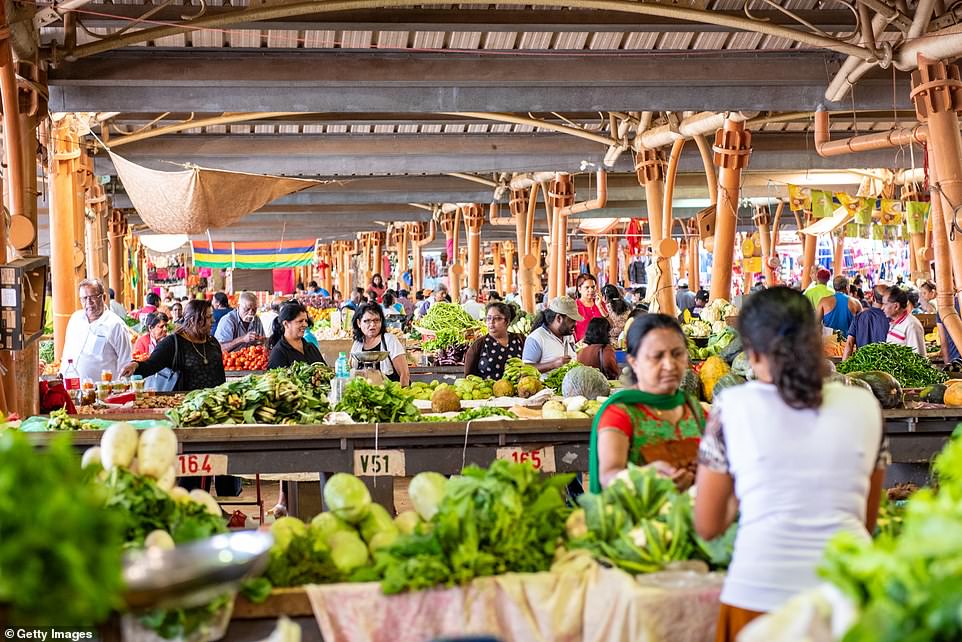 We’re spending the morning at the exotic Flacq Market on the eastern coast of Mauritius, the Indian Ocean island which opened to fully vaccinated international travellers on October 1.

My fiancé, Dan, and I arrive here two days later and already the island is buzzing with British holidaymakers who are making up for lost time.

And I’m about to see why. Yes, Mauritius requires a 12-hour flight from the UK (British Airways is flying direct six times a week this winter), compared with eight or nine hours to the Caribbean, but it’s an entirely different price point once you’re here.

Eat out in Barbados and you can pay London prices; go for a feast in a local restaurant in Mauritius and you’re looking at £30 for three courses and a bottle of wine.

Most come here for the beaches, but the food is right up there, too. Thanks to the country’s multi-cultural heritage, it’s a unique blend of French, African, Indian and Chinese influences. Some days, we enjoy croissants for breakfast, spicy biriyanis for lunch and sushi for supper. 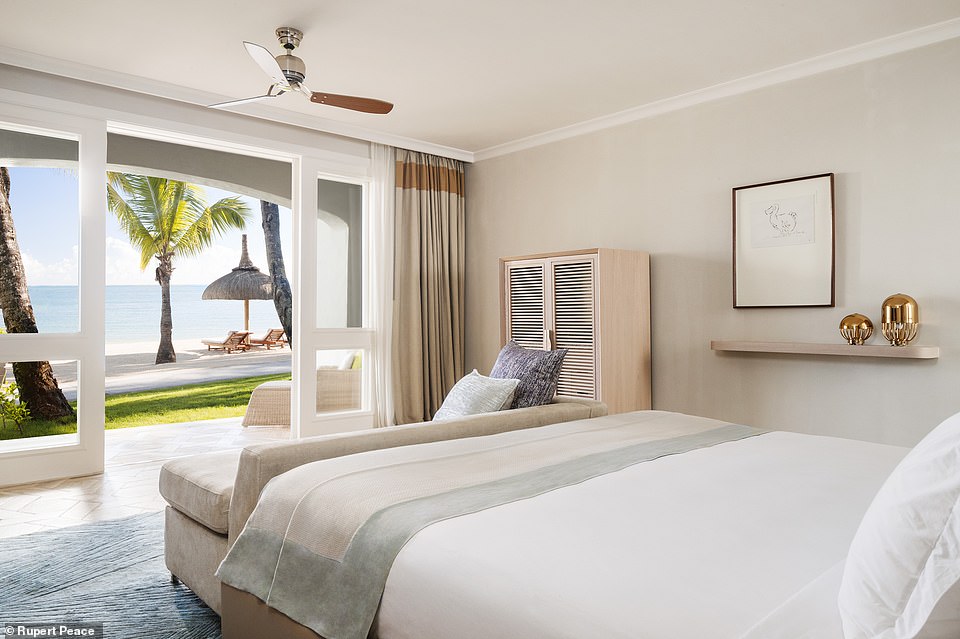 A room at the One&Only. The hotel reopened just days before Harriet and her fiance check in for their stay 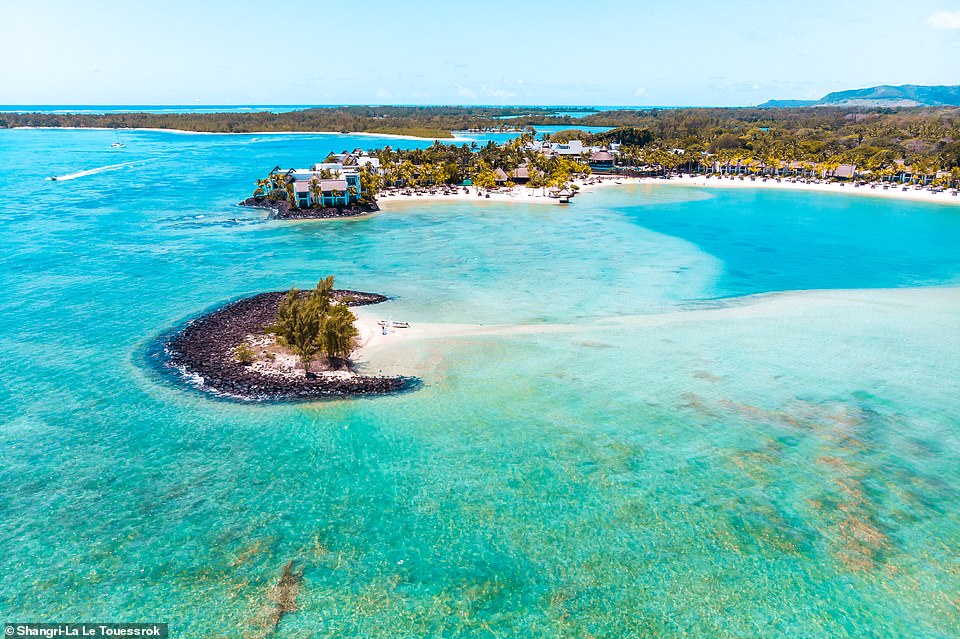 This blend is entirely to be expected, given that the Dutch arrived in 1598 before the next rulers, the French, brought sugar cane-cutting slaves over from Africa and Madagascar to tend the fields.

Under British rule from 1810, Africans immigrated and the Chinese moved to the island as merchants. Mauritius finally became independent in 1968, adopting a constitution based on the British system, with political power vested in the Prime Minister and the Cabinet, and elections held every five years.

The culture is one of tolerance; mosques, churches and colourful temples sit harmoniously side by side, and the government and economy is robust and stable.

Even at the local open-sided market, masks are worn everywhere and yellow arrows guide shoppers in a one-way direction.

Weekly testing for those working in the tourism industry has become the norm, and the island — which for the past 18 months has lain as dead as the dodo that once roamed its shores — has so far fully vaccinated 66 per cent of its residents.

With the help of tour operator Elegant Resorts, we’re spending the week on the east coast, where the trade wind blows wild and the seafood is at its best.

This glorious stretch of coastline is also home to many of the island’s best resorts, including our first stop, One&Only Le Saint Geran, which recently celebrated its 46th birthday.

Set on a private peninsular with more than a mile of white-sand beaches and 60 acres of lush, mature gardens, the hotel reopened just two days before our arrival but is in full swing.

After check-in, we’re whisked in to see the hotel doctor for a rapid antigen test.

It takes just a few minutes and then we’re in full holiday mode.

‘Many of our customers are repeat. We see children grow up and they become like family,’ our ‘butler’, Sobron, tells us as he shows us around our impressive suite.

I can see why. Our room, just a step away from the champagne sands and turquoise waters, is decked out in chic cream furnishings, marble surfaces, parquet flooring, coral artwork and a huge, egg-shaped bathtub.

I’m told one current British guest, aged 28, has been coming here every year since he was two (the current record holders are a Belgian couple who have returned 86 times).

The hotel may have the best beach on the island but it’s the outstanding service that sets it apart. Many of the staff have been here for decades. Sobron is one of them, having joined the hotel straight out of college 23 years ago. 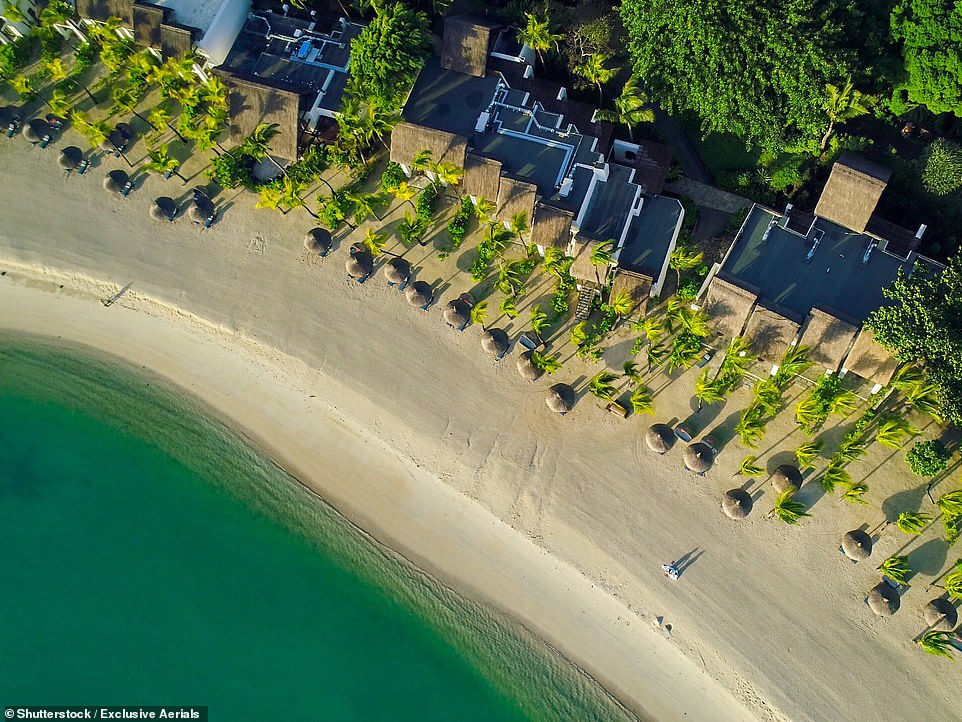 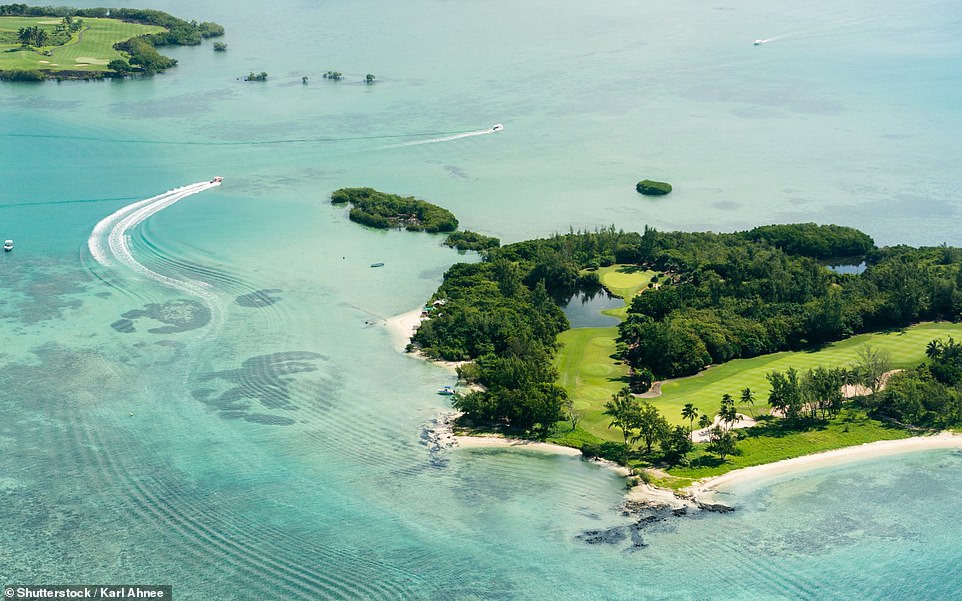 KNOW BEFORE YOU GO

Fully-vaccinated travellers can enter Mauritius quarantine-free with proof of a negative PCR test taken within 72 hours of departure.

Travellers must also have proof of travel insurance which covers Covid.

Antigen tests must be taken on arrival at the hotel (day 0) and day 5.

All travellers must fill out and print five health forms available at mauritiustravelform.com before travel.

Under-18s are exempt from vaccination requirements but must adhere to the same testing requirements. Children aged under six can take an oropharyngeal swab.

For more information go to mauritiusnow.com.

Even during peak season, there is an average of 3.5 members of staff per guest, and each one knows every guest’s name. I’m delightfully greeted as ‘Miss Sim’ everywhere I go, with a hand to the heart and bowed head. Every door is opened; every glass is topped up.

Our days are spent being pruned and pummelled in the chic spa; swimming, sailing and snorkelling in the glittering waters, which flicker between a kaleidoscope of blues; sipping white wine and rum cocktails from our squidgy sun loungers; and feasting on some of the finest food I’ve ever tasted in the five excellent restaurants.

Our second stop is Shangri-La Le Touessrok, a 20-minute drive south. It’s a sprawling resort with five beaches, a private island retreat and a world-class 18-hole golf course, situated on nearby island Ile aux Cerfs, where you take a ten-minute boat to hit the first tee.

Dusk quickly becomes my favourite time here, when bulbs strung between palm trees dance in the wind, giant fruit bats flutter from tree to tree, their furry faces like little monkeys, and the sky glows shades of pastel pink and blue.

British travellers are everywhere: honeymooners, multi-generational families, solo travellers, couples celebrating milestone anniversaries. But my favourites are the three lazy residents, all more than 100 years old, who we sit with each day.

They’re huge, with gummy smiles and crinkly necks, and barely move during our stay, reflecting the unhurried pace of Mauritian life. I’m talking, of course, about the hotel’s very own Aldabra tortoises.

Mauritius rewards even the smallest attempt at exploration.

One afternoon, we use the hotel’s e-bikes to investigate the fishing village of Trou d’eau Douce, tucked away in a valley among sugar cane and banana plantations.

Remarkably, it seems to have kept its authenticity, despite being sandwiched between large resorts.

Cockerels cluck around back yards, stray dogs sleep on the heat of the Tarmac, locals hang out of windows yelling ‘hellos’ at those who drive by beeping, fisherman unload their catch and colourful corrugated iron huts sell local delicacies such as dholl puri, a thin pancake-like bread made with gram flour, lentils and cumin seeds.

The village’s literal translation is ‘sweet waterhole’, and water is at the heart of everything, including its three restaurants, which serve plates of locally caught fish. 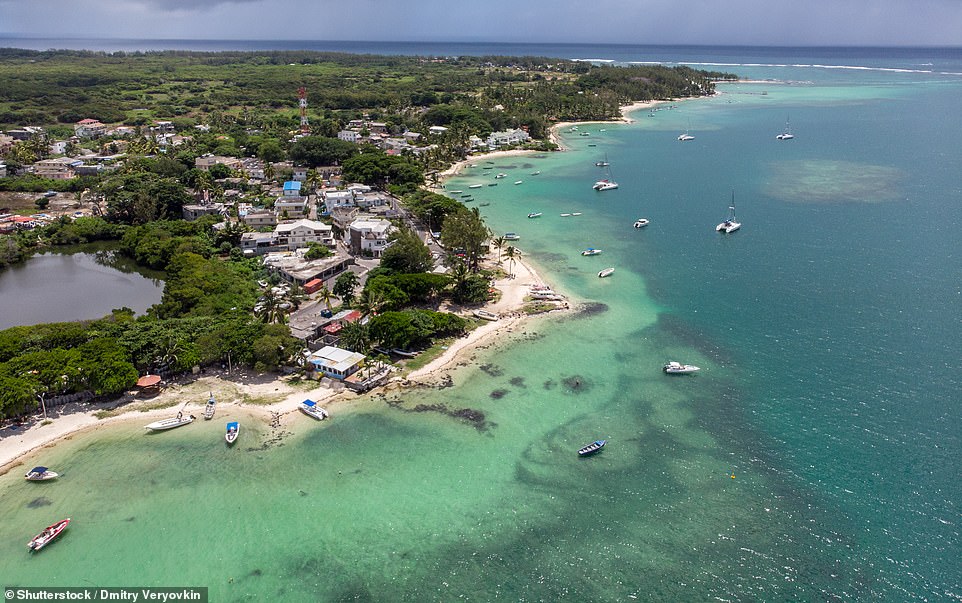 According to Harriet, the fishing village of Trou d’eau Douce, pictured above, has ‘kept its authenticity, despite being sandwiched between large resorts’

Most famous of all is La Case Poisson whose owner, Mois, distributes seafood for the local fishermen to the nearby hotels, keeping the best for his own restaurant.

We manage to nab a table on our final night through the Shangri-La’s resort manager, Naji, who dines here several times a week — despite being a vegan — as he enjoys the atmosphere so much.

Customers are seated in the modest terrace with whitewashed walls and a little wooden shack before being presented with the day’s catch on a giant silver platter.

Giant prawns, mussels, octopus, calamari, lobster and red snapper are balanced on our table while we quiz the friendly waiter. 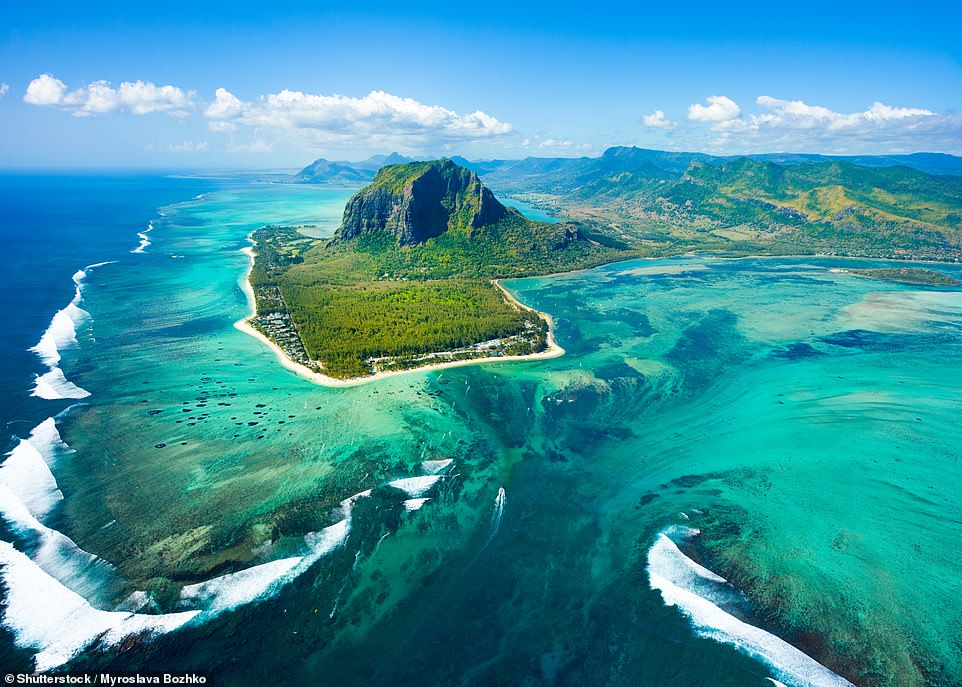 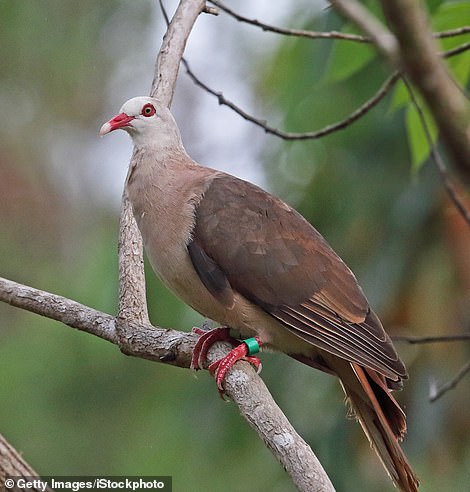 The rare pink pigeon (pictured) is endemic to the island

We eventually go for the signature salad, a tangy tomato salsa with chunks of fresh octopus and red snapper, grilled in the courtyard’s open fire and served with buttery garlic bread and a simple coleslaw which tastes as if it’s come straight from the wicker baskets of Flacq Market.

Our fellow guests are an eclectic bunch; we’re seated alongside a local family of 25 or so and are told the First Lady of Mauritius had dined here the night before, as had a former Miss Universe.

They all come for what is a delightfully simple affair. I order a glass of white wine and the waitress brings out two bottles. ‘This one or this one?’ she asks. I go for the Chablis as I don’t recognise the second bottle. Dan asks for beer. ‘Big or small?’ ‘Big’, he says, and she smiles and walks away.

The next day, we head to Lolita’s Rum Shack, along one of the backroads of Trou d’eau Douce. Lolita, who’s been flavouring rum for 18 years after learning the trade from her father and grandfather, welcomes us with a wide smile and a fist-pump before leading us into her recently converted garage.

She’s tiny, and is forced to go on her tiptoes to scoop out ladles of rum from the sticky plastic tubs. Coconut, coffee, ginger, chilli, banana, cinnamon, almond, passionfruit — every flavour imaginable seems to be here. We sample several, ending with the chilli, which instantly tingles on the tongue then hits the back of the throat.

It’s sweet, warm and unforgettable — quite like our whole experience of Mauritius.