A little slice of heaven: Visiting the Black Forest is all about beautiful scenery, ancient towns, beer, ham – and lots and lots of gateau

Do you remember the 1970s? If so, you’ll undoubtedly have tucked into that dessert trolley favourite Black Forest gateau, with its rich layers of chocolate, boozy cherry jam, whipped cream and black cherries on top.

And while the cake may have fallen from fashion, its namesake (although not the inspiration for its name), a heavily wooded region of south-west Germany, is still an absolute foodie heaven.

For irresistible cured hams and sausages, fruit brandy and craft beers, the Black Forest takes the country’s most show-stopping gourmet experiences to delicious new levels. The region is a popular holiday destination for Germans. With evergreen forests, romantic hills and beautifully preserved Gothic towns, it offers the best of Germany in microcosm and better still, no crowds. 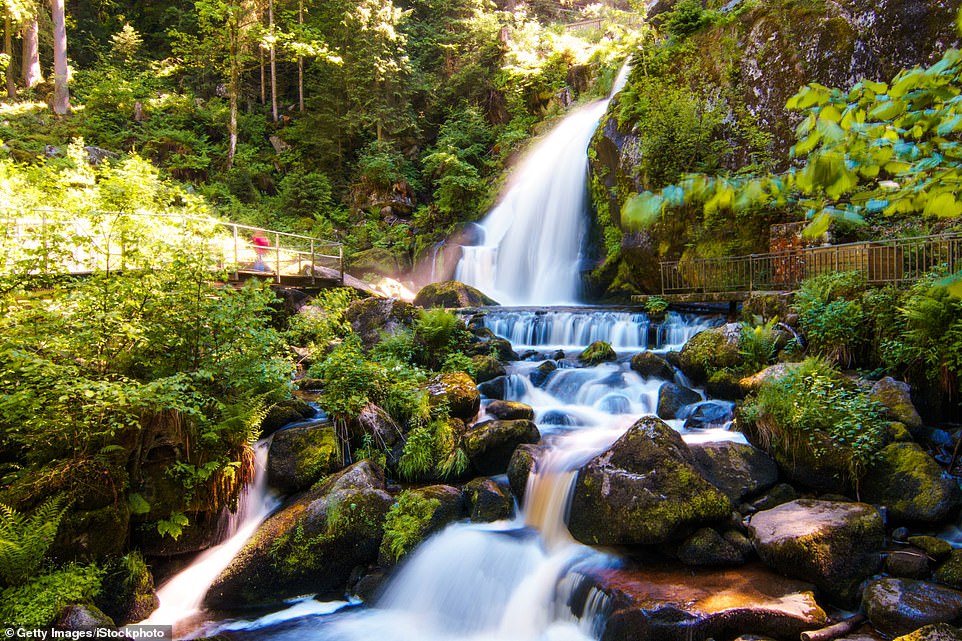 High drama: An astonishing 15,000 miles of walking paths are marked and often lead to mirror-clear lakes and bewitching panoramas. Pictured is Germany’s largest waterfall, near Triberg

And it’s easy to get to. Fly direct to Stuttgart, or into the equally convenient Strasbourg airport in France, or even Basel or Zurich just across the border in Switzerland – then hop on trains and buses to do a loop of the entire Black Forest.

The area can be divided into three bitesize chunks: the northern, central and southern highlands, together nearly as big as Devon, but focus on a manageable slice and you’ll make the most of your stay.

In autumn, the hiking, biking and fishing are at their best. Pick up a rental car and drive to Schonach im Schwarzwald in the central Black Forest. This wild woodland is known as the Schwarzwalder Kirschtorte – or Black Forest gateau – capital of the world, and there is certainly no shortage of opportunities to discover why.

Triberg, the closest the central highlands has to a tourist town, is a steep-sided scattering of half-timbered, crooked houses and Rapunzel towers. It’s home to two of Germany’s most celebrated cake shops, both of which attract a steady stream of fans. 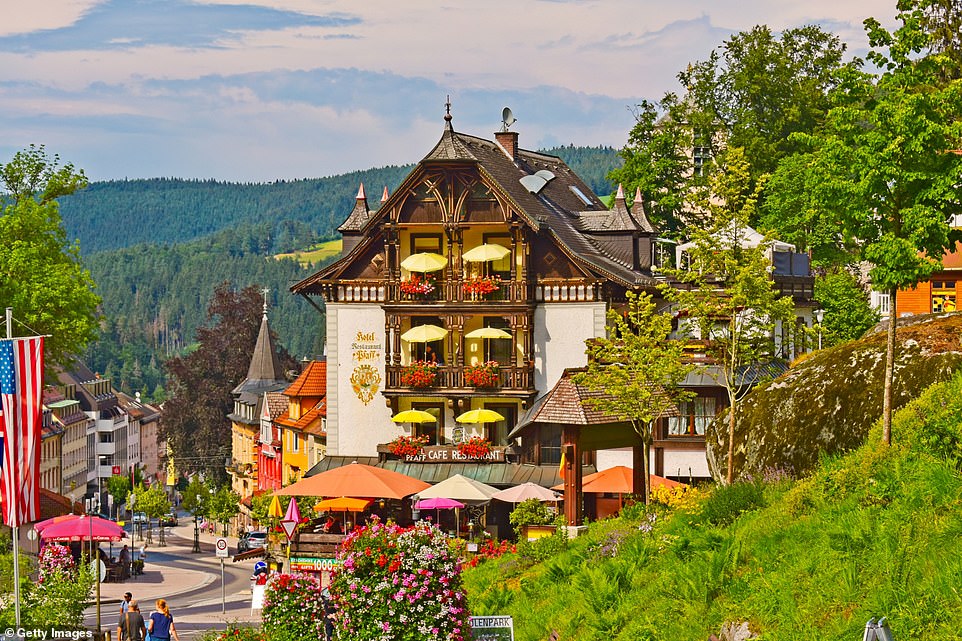 Cake town: A colourful street in Triberg, loved by tourists for its gateau shops

The Black Forest’s legendary gateau has many origin stories, but the most popular points to it being created in 1915 by Josef Keller, a confectioner from Lake Constance. He used kirschwasser, or kirsch, a brandy made from the forest’s black cherries, then passed the recipe on to his apprentice, August Schafer.

Cafe Schafer claims to still use the original recipe, and here August’s son Claus – the region’s answer to Paul Hollywood – sells his signature cake topped with mini chocolate pines and creamed rosettes for £2.50 a helping.

Across the street, though, is my absolute favourite: Cafe Adler, with utterly scrumptious chocolatey sponges soaked in cherry brandy. 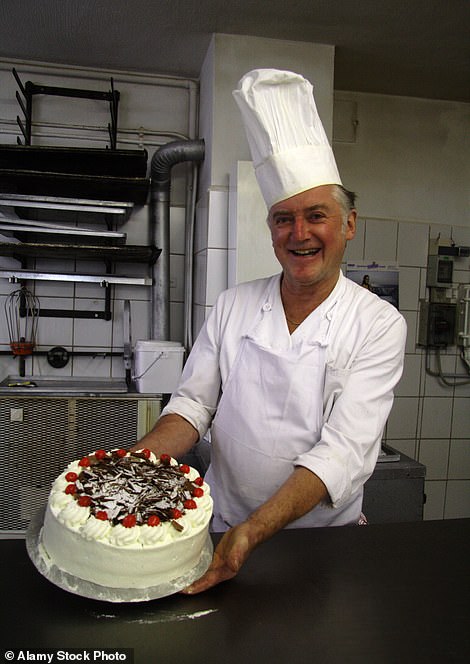 For lunch or dinner, try nearby Restaurant Bergseestuble, run by the Weis family. The menu tackles Black Forest classics including bread dumplings, pork loin with wild mushrooms and spruce-smoked ham. And just for a change at dessert, sample the apple strudel with lashings of cream.

Triberg’s star turn is Germany’s largest waterfall, while nearby Schonwald is where the inventor of the first cuckoo clock, Franz Ketterer, lived. The hand-crafted souvenirs have been produced here since the 1700s.

Schonach im Schwarzwald is home to the world’s largest cuckoo clock, with a 24ft pendulum and a cuckoo the size of a plumped-up Christmas turkey.

Most days, the Black Forest begs to be explored on foot. An astonishing 15,000 miles of walking paths are marked and often lead to mirror-clear lakes and bewitching panoramas, so pack a picnic basket and an extra slice of cake.

The countryside here is soul-stirring, and save for the odd Red Riding Hood-style cottage en route, there’s usually little sign of life at all.

One of the most scenic trails leads to Blindensee, a raised bog lake where, in the right light, it’s not hard to imagine a troll crouching behind a rock. Hike from here through a hangar of forest to gable-roofed Gasthaus Wilhelmshohe, a hunting lodge that serves smoked pork shoulder, coarse sausages and cheese spatzle, or pillowy dumplings, all for £10 each. You could continue through the woodlands to Rohrhardsberg nature reserve to see cuckoo nests, capercaillie and roaming wild boar, but lunch here shouldn’t be rushed. On a sunny afternoon, why not stake out the terrace with a frothy Furstenberg beer, brewed in the area since 1283.

The rest of the wider Black Forest, if you decide to venture farther, feels just as enchanting.

One hour to the south, Lake Titisee, with its idyllic rowing boats and electric skiffs, is a mini German Riviera with spa hotels, biergartens and gelato huts to boot. The Gutach Valley to the north is another must-see – it’s the Black Forest at its most untouched and medieval. As you travel around, you might spot a local woman in folk dress wearing a traditional bollenhut – a straw hat with gigantic, cherry-shaped pom-poms.

At the end of a refreshing week here, I defy you to leave without feeling full of hearty cheer, or gemutlichkeit, as the Germans say.

British Airways flies from Heathrow to Euroairport Basel-Mulhouse-Freiburg from £28 one way, and to Stuttgart from £36 one way (britishairways.com). Mike MacEacheran was a guest of the German Tourist Board and stayed at Sonnenseite apartment in Schonach, which costs from £70 a night for four (sonnenseite-schonach.de). For more information, visit schwarzwald-tourismus.info or germany.travel.