Cyprus, the sure bet: It’s so keen to have us that it will even cover our costs if things go wrong…

Under an old fig tree in the Paphos district of Cyprus, water flows down a wall of rock to form a shallow pool known as the Baths of Aphrodite.

‘If you splash the water on your face, you’ll be blessed with eternal youth and beauty,’ our tour guide Dena tells us.

Snorting with laughter, I notice others around us earnestly pressing water to their cheeks. 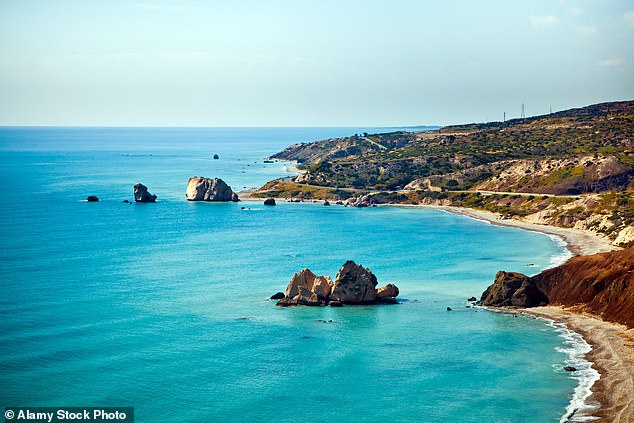 Beauty: The Birthplace of Aphrodite beach in Paphos, Cyprus

Well, I suppose it can’t do any harm. So, to my partner Chris’s great amusement, I discreetly throw a few drops on my face.

At midnight, swim naked three times around Aphrodite Rock — a large sea stack off the coast of Paphos, which is said to be the birthplace of the ancient Greek goddess of beauty, love and fertility — and you’ll be youthful for ever.

That’s a mythical promise, but now Cyprus has announced a real one: its government will cover the cost of accommodation, medicine and food for tourists who test positive for the coronavirus after visiting, and their families.

A 100-bed hospital is being set aside for holidaymakers, as well as several ‘quarantine hotels’ for the patients’ families.

Luckily, we’re here long before lockdown, staying in Paphos on the south-west coast, a five-hour flight from the UK.

From the airport, road signs direct us to ‘the tourist area’, where most major hotels are located on the waterfront.

Our home for the week is the Louis Ivi Mare — a brand new hotel which opened a year ago.

It is simply immaculate, with bright white walls, big green plants and modern, colourful furniture. We have a room on the first floor, which to our delight has a private hot tub on the balcony.

I don’t imagine there’s a better place in the whole of Paphos to watch the sun set.

It takes immense willpower to drag ourselves away from the Utopia Bar, where friendly staff ply us with ice-cold bottles of local beer, Keo, as we relax by the Olympic-size swimming pool (the biggest in town). But the paved promenade that stretches from just outside the hotel for miles along the coastline has even the laziest of us reaching for our trainers. 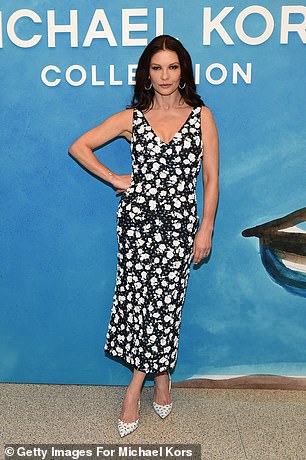 Catherine Zeta-Jones has visited the island

As you might expect in a tourist area, there are a good number of souvenir shops, Irish pubs — and even a Pizza Express.

But these are easily forgotten once you reach the impressive harbour, still guarded by Paphos Castle, which was originally built as a Byzantine fort.

Nearby is Paphos Archaeological Park, which houses incredible Roman villas with floor mosaics telling an array of mythological stories in scenes painstakingly created from tiny pieces of coloured stones.

Then there are the Tombs of the Kings, the graves built as houses for the deceased during the 4th century BC.

If that isn’t enough history, head 45 minutes down the coast to Kourion Archaeological Site, where you’ll find yet more mosaics and a restored amphitheatre overlooking the sea.

For a Classics geek, it’s Christmas come early. And with archaeologists still digging, it’s exciting to think there is yet more history under our feet just awaiting discovery.

I only wish that, like the locals, I had come prepared with an umbrella to protect my head from the beating sun.

If you aren’t as eager to explore the Greco-Roman world, you could try a boat trip to the Blue Lagoon beach instead.

Only accessible via a dirt track on land, most visitors travel by boat from Latchi Harbour. Even then it’s a fair old swim, because the boats can’t anchor too close.

We watch in awe as a group of teenagers dive headfirst off the side of our boat into brilliant turquoise water — before quickly swallowing our pride and opting for the ladder at the back.

It’s like getting into a bath, with clear water perfect for snorkelling.

For hikers, nearby Akamas National Park has two main trails — called Aphrodite and Adonis, naturally — which are each around four miles long.

It’s a brilliant way to shake off the inevitable food coma you will find yourself in at some point. 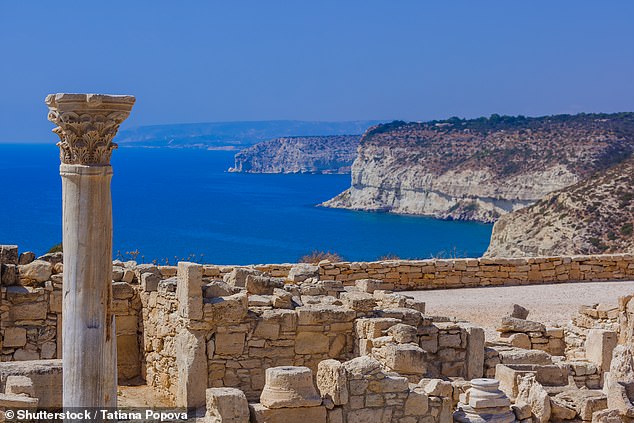 Pictured is the Kourion Archaeological Site, where you’ll find a restored amphitheatre overlooking the sea

Our taxi driver from the airport had warned us about ordering ‘the meze’ — but it’s impossible to resist plate after plate of fresh fish, vegetables and cheese.

Another food highlight is Katoi Restaurant in the mountain village Omodos, where we were served an endless array of excellent dishes — including the most delicious creamy, mushroom orzo (pasta that looks like big rice) I’ve ever tasted.

We end the meal with a potent shot of Zivania, while the owner patiently explains Greek philosopher Plato’s Allegory of the Cave.

While charming, he clearly thinks we have seriously missed out by opting for the vegetarian meze.

‘Barbecuing meat is the national sport of Cyprus,’ our guide Dena jokes as we leave.

After lunch, we stroll around the 17th-century Monastery of the Holy Cross, check out an ancient wine press and shop until we drop at the many markets.

Must-buys include a bottle of delicious carob syrup and sweet sujuk — which look a little like extra-long sausages, but are actually nuts threaded on to a string and dipped repeatedly in grape juice.

Cyprus’s strategic position on the eastern edge of the Mediterranean Sea means it has been conquered and divided more times than anyone can count. Even today you’ve got Turkish territory in the north.

But, with 300-plus days of sunshine each year, Cyprus is, above all, a beach holiday destination — loved by the likes of Catherine Zeta-Jones, Elton John and Rod Stewart.

There are plenty of sandy beaches from which to choose, but Paphos locals seem to prefer the rocky Municipal Baths Beach, where you can enter the water via the sand, or steps from a concrete pier.

Sunbeds here are also among the cheapest in Europe, costing just €5 (£4.50) for a lounger and umbrella all day.

With the good weather stretching well into October, Cyprus is an ideal place to go for late summer sun, once we’re all travelling again.

In fact, if you get swimming round that rock, you may even find it’s the perfect place to spend your eternal life.

Pay up or close: the dilemma facing restaurant owners in the Beirut Port blast zone

'Quite remarkable' early response to Retire in Dubai scheme