Face mask rules on flights led to yet another onboard brawl over the weekend. A video of the fight on an Allegiant Air flight in the USA went viral after being shared on Instagram. Passenger Rylie Lansford was adjacent to the altercation and caught it on camera.

The clip shows a bearded man in a white shirt standing up in his seat.

He is not wearing a face mask – despite the airline rules requiring one.

A man in the row in front, wearing a black T-shirt, can be seen grappling with the mask-less man.

Meanwhile, a female member of staff in a high vis jacket cries “Sir! Sir!” as they attempt to break up the fray. 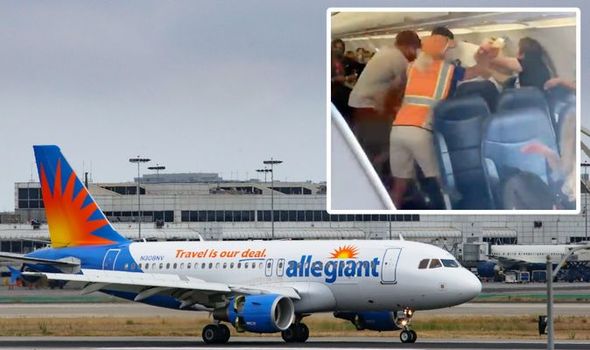 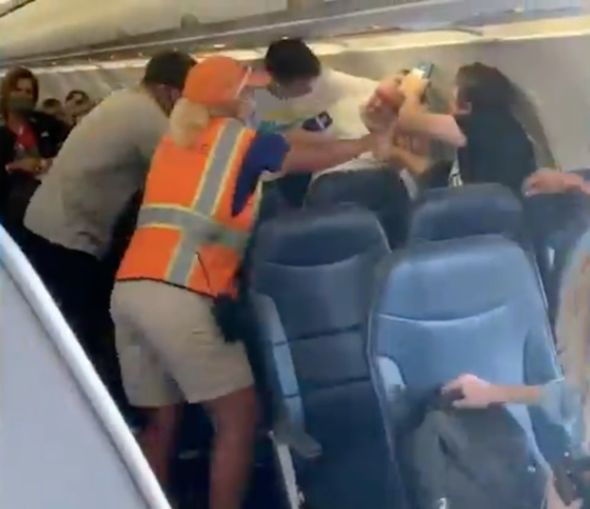 Lansford herself took to Instagram to explain the background to the fracas in a video.

She explained that the man in the white shirt (“Passenger A”) was wearing a face shield when he boarded and refused to wear a face mask.

A flight attendant tried to reason with him but to no avail.

“He was just being really rude and condescending,” recalled Lansford.

Then, the man in the black T-shirt (“Passenger B”) – whom Lansford claimed was “drunk” – got involved. “They were yelling at each other,” she said.

Lansford continued: “The flight attendant is like ‘I need you both to stop or you’re both getting kicked off the plane.’

“I thought I thought it might be over but it wasn’t over because guy B would not stop just talking – F this, F that… everything was so annoying.”

Lansford said she attempted to reason with passenger B but he continued to shout.

“He wouldn’t stop swearing at everybody and just threatening the guy behind him,” she said. 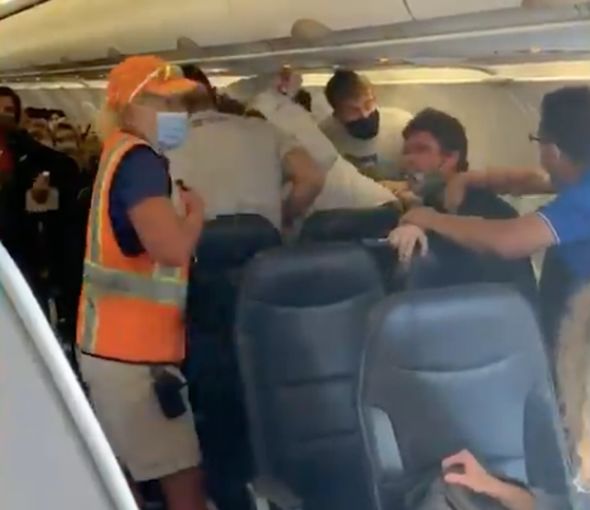 However, “all hell broke loose” when the flight attendant told passenger A he’d have to leave the place.

“I’m pretty sure guy A takes the first swing at guy B sitting next to me, I don’t know because as soon as I see arms flailing, me and the girl next to me just bolt to the front with the flight attendants,” she recalled, stating this is the scene captured in the viral video.

After this, passenger A left the plane, but passenger B was still allowed to travel.

“Guy B did not get kicked off, which was a shame because he needed to be,” said Lansford.

She concluded: “It was annoying and I hope that everyone can just be nice to each other and wear a face mask when you buy a plane ticket.” 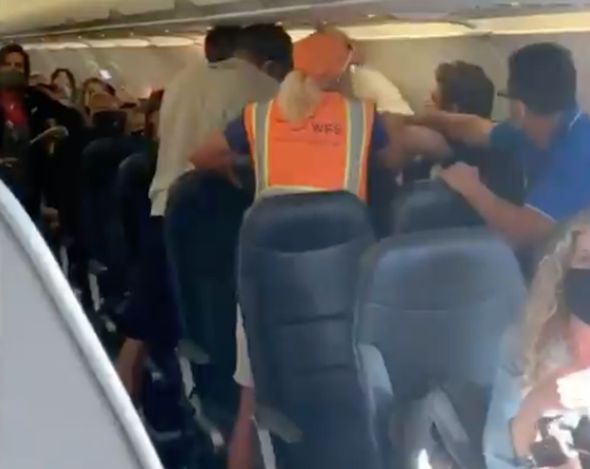 In a statement from Allegiant Air to Fox News, the airline confirmed the incident.

“Face coverings must be made of a solid material, fully cover the mouth and nose, fit snugly against the face, and be secured under the chin,” said the US carrier.

“Prohibited coverings include those with exhalation valves, holes (such as lace or mesh), neck gaiters, and bandanas.

“Face shields may be worn in addition to a face covering, but not as an alternative.”