‘Some elements were worth the money, some were verging on a scam’: Travel expert buys every extra (plus a limo to the airport) in a bid to make flying Ryanair ‘first class’…

A flight with Ryanair is many things – but a premium travel experience is never listed as one of them.

However, what happens when money is thrown at a trip with the low-cost Irish carrier?

One travel expert has filmed a fascinating attempt to make a £14 Ryanair flight’ first class’, by taking a limo to the airport, buying every possible extra, booking a spare seat next to him on the plane and drinking fizz. Some of the trip he described as a ‘shambles’ and ‘verging on a scam’, but chunks of the journey were vastly improved, he revealed. 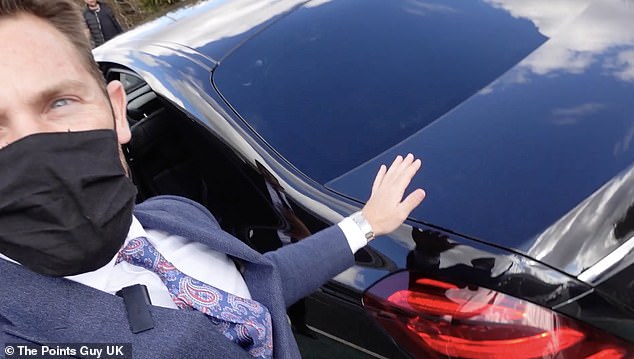 Nicky Kelvin, head of The Points Guy UK, filmed a fascinating attempt to make a £14 Ryanair flight’ first class’. Step one – limo to the airport (above) 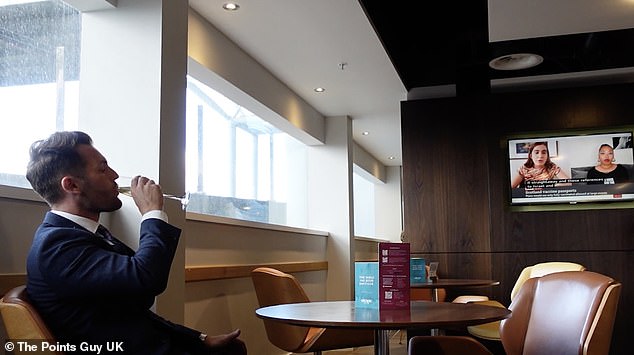 The experiment was carried out by Nicky Kelvin, head of The Points Guy UK, who began a journey to Madrid, via London Stansted, by putting on a smart suit and riding in an S Class Mercedes to the airport using a company called ‘Wheely’ (£204).

He said: ‘The car arrived on time. It was incredibly comfortable with a professional, smartly dressed driver who set the temperature and radio volume to the desired levels and provided Evian water.’

He’d paid for fast-track security at the airport (£7), but he said the experience ‘was not premium… with rude staff ushering passengers around’.

The Escape Lounge (£22.99 or use Priority Pass) cheered him up, though.

He described this as ‘not the most luxurious’, but it was a space ‘to escape from the airport crowds with complimentary food and beverages and comfortable seating’.

After buying a travel pillow (£14.99) to enhance comfort in the air, it was time to board. 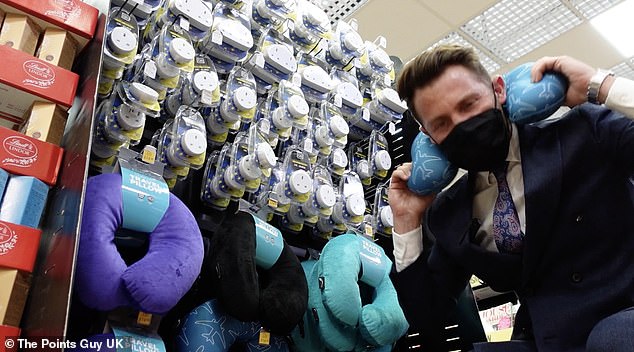 Nicky bought a travel pillow £14.99) to enhance comfort in the air

And here, the journey went awry.

Nicky had paid for priority boarding (£20.85), but said: ‘The boarding process itself was a shambles. Priority boarding was ignored and once you passed through the boarding gate, all passengers were forced to wait on a stairwell for around 15 minutes with bags in tow until finally being allowed to cross the tarmac to board the plane.’

On board, the experience improved again (mostly) – because Nicky had secured seat 1A at the front (£20), paid for the seat next to him to improve the roominess factor (£34.99) and ordered himself a glass of prosecco (£6) and a hot beef lasagne (£5.10). 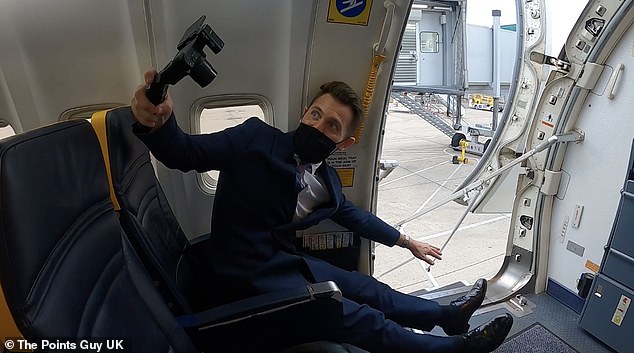 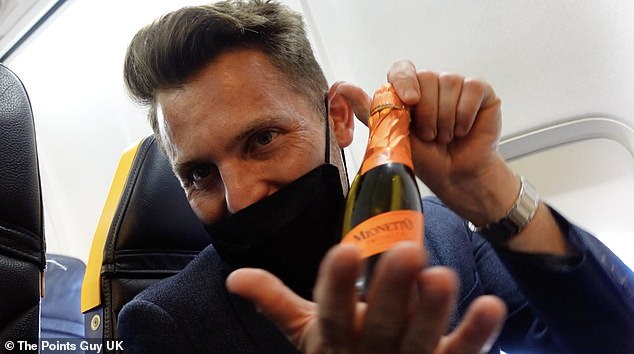 The onboard Prosecco. Sadly, Nicky says, it was served warm 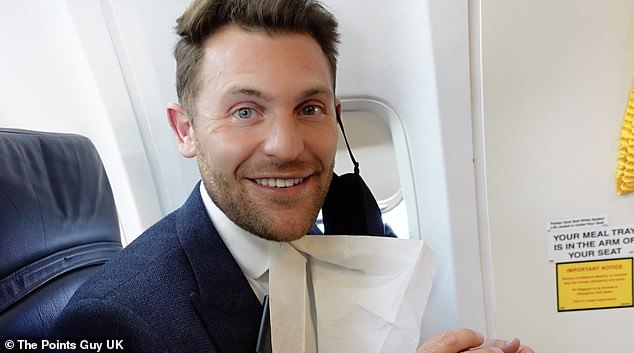 HOW TO UPGRADE A RYANAIR FLIGHT

Step 1: Change into something smarter

Step 4: Buy lounge access before your flight (£22.99 or use Priority Pass)

Step 9: Order prosecco once onboard (£6)

Source: The Points Guy UK for a trip from Stansted to Madrid.

He told MailOnline Travel: ‘Sitting in seat 1A with a free seat next to me felt like I had the best spot on board. Being served first, getting off the plane first and having pretty much unlimited legroom and space was a huge bonus. ‘

The Prosecco, meanwhile, ‘was about as fancy as it got on board’ and it was ‘warm and served in a plastic cup and therefore was not that enjoyable’. But the lasagne was ‘delicious’.

We asked Nicky how his experience stacked up against, say, paying for a business-class trip with BA.

He said: ‘Some elements were worth the money and some were verging on a scam.

‘The luxury transport to the airport set the journey off to a wonderful start, but of course, you could take a luxury car when flying any airline.

‘You would have a better time in some British Airways lounges flying business class and you would also enjoy cold Champagne and better food by Do & Co on board – although to my tastebuds, the lasagne was a winner.

‘Paying for a front-row seat, and the free seat next to me, assuming this can be bought for a reasonable price, created true value for me and I would definitely recommend this as a key way to greatly improve the experience flying Ryanair.

‘Even in British Airways’ European business class [“Club Europe”], except for the front row, you are sitting in the same seats as economy passengers, although the middle seat is automatically kept free.

‘The priority boarding option in my case was a complete waste of money and not honoured by the airline.

‘Overall – it will come down to price. If you want a truly premium experience, you are unlikely to match the overall British Airways business-class experience to a low-cost airline and low-cost airlines like Ryanair will remain the choice for those primarily lead by cost.’

For more information on travel tips and tricks, sign up to The Points Guy UK. To see Nicky’s video in full, click here.