Run by Ben and Sophie Crittenden, this most zeitgeisty of the Michelin-starred Kent coast restaurants has just moved down the road into quirkier premises. Now there’s a remodelled log-cabin style exterior and frosted windows (presumably to stop passersby peering in). The refurb includes an an open kitchen and a steam-punk blend of dark painted panelling, polished floors, green and burgundy 1950s diner seating. Six-course set menus are £65; sister restaurant Arya, upstairs in Ramsgate’s Ravensgate Arms, is run by Ben’s brother Luke and sister Jess, with small plates from £6-14.
• starkfood.co.uk 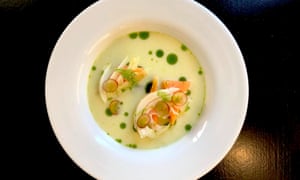 This classy bistro was opened on Deal High Street in 2016 by Benoit and Sarah Dezecot, who are also behind one of the town’s most atmospheric wine bars, Le Pinardier. During lockdown it enjoyed a rather chic makeover, creating more space for diners with colourful, comfier chairs, a separate cocktail bar and a contemporary deco-inspired feel, as well as local artists’ work adorning the walls. They’ve also bagged a new head chef, Harry Johnson, formerly Michelin-starred Daniel Rose’s right-hand man at La Bourse et la Vie in Paris. His daily-changing chalkboard menu might include pan-fried gurnard fillets with parsley, a blood-rare bavette and chips, roasted quails with a nutty almond and cauliflower puree, apricots and girolles, or caesar salad with guinea fowl and truffle.
• Mains from £20, frogandscot.co.uk 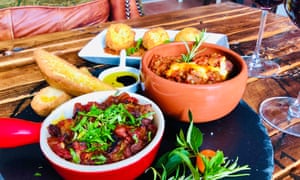 In 2016, long-established Kensington restaurant Whits moved to an unassuming parade in Walmer. Run by husband-and-wife team Steve and Eva Whitney, its combination of classical fish cookery, slick service and simple dining room won plaudits. Nine months after Steve’s untimely death last autumn, the venue has just reopened as the eponymous Eva’s, a laid-back wine and cocktail bar with antipasti menu and soon-to-open deli. There’s also a charming rear courtyard that’s a sun trap on a warm afternoon – perfect to linger with a Campari spritz over sharing plates, such as the burrata with roasted tomatoes and basil, home-made arancini, Italian meats and chargrilled vegetables with caponata.
• Plates from £8.50, whits.co.uk, @whitsofwalmer 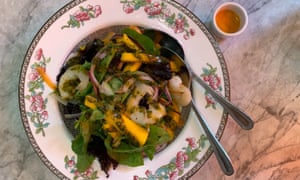 At the far end of Northdown Road, if you’re heading up from the Turner Contemporary or Main Sands, is a new neighbourhood gem. This South African kitchen was due to open in April, but with lockdown scuppering plans, owner Brenda (the “ouma”, or grandmother, in the name) adjusted with instantly popular cook-at-home takeaway dishes, from risotto to bobotie (a mixture of curried meat and fruit with a creamy golden topping). Now fully open, her cafe is a stylish three-floor space with parquet flooring, a panelled mezzanine back dining room and small pavement terrace. For lunch there are only two daily chalkboard options, but don’t let that put you off: a sensational sweet-savoury mango salad with mint, leaves and Thai chilli dressing was topped with plump, succulent prawns. An alcohol licence is coming soon, but for now it’s BYO.
• Mains from £5.50, oumaskitchen.co.uk 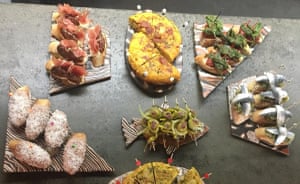 In the past few years, the revitalised Harbour Arm in Folkestone – the Victorian promenade that curves out to sea – has been instrumental in attracting hip young food startups to the town. Pickup Pintxos, the baby of Gravesend-raised Italian chef Gianni Modena, is proving such a hit here that it’s just taken over larger premises on South Street. Covid means the restaurant proper will now open next year, but the takeaway counter has a formidable selection of Basque-inspired hot and cold plates, from salt cod fritters to silvery cider-marinated sardines with shallots and gernika peppers. Especially recommended are the croquetas: the squid ink and piquillo peppers, the result of six hours’ painstaking reduction, just have the edge over those oozing serrano ham.
• Most small plates £4-5, pickuppintxos.com 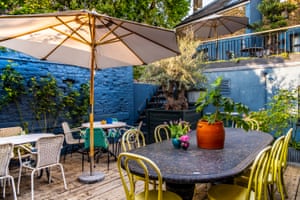 Since opening two years ago, this elegant independent boutique hotel and restaurant has become synonymous with the town for many younger visitors. Now owners Christopher Hicks and Alex Bagner have gone one stage further and hired Chiltern Firehouse supremo Nuno Mendes to create a new summer menu with 28-year-old head chef Luke Jeffery-Green. The results of this partnership are special: from an almost dessert-like bowl of heritage tomatoes with charred peaches, soft raspberries and marcona almonds, to Mendes’ signature creation – the crab doughnut, which sells out daily. The beef tartare is an inspired reboot, its glistening cubes of ruby-red meat piled on a vivid green tarragon sauce and topped with crisped cabbage leaves. The reworked Tuscan-style courtyard garden surely has the biggest olive trees this side of the Channel.
• Mains from £13, therosedeal.com 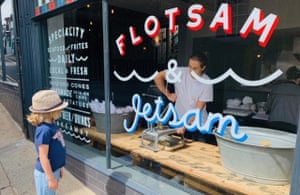 With its attractive position by the medieval York Gate arch, overlooking the sandy bay, Wyatt & Jones has been a staple of Broadstairs dining since it opened in 2013. It’s currently closed until September but a window-counter, Flotsam & Jetsam, has been a smash hit. Serving next-level seaside fare to eat on the beach, its exciting menu of hot and cold plates includes fritto misto, crab dumplings and tempura squid. Monkfish scampi in squid ink batter, devoured on the jetty, was butter-soft, and a cone of frites were briny perfection. Note: beware the extremely predatory gulls.
• Plates £3.50-12, wyattandjones.co.uk 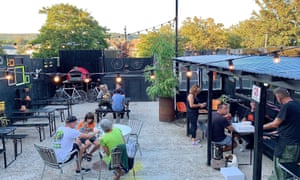 Space 7 is a Folkestone old town bar and gallery that was in situ long before glam neighbours Luben, Market Square and Tin & Tap (all under the same ownership as nearby pub, the Pullman). Owners Andy and Sam Shorten have rebooted their venue with Borough Wines on tap, an on-trend cocktail list, lots of socially distanced seating inside and a rotating schedule of cheffy pop-ups from the town’s most esteemed outlets. There’s a Provençal menu takeover by the acclaimed Folkestone Wine Company on 31 August, and London burger dons Lucky Chip on 5 September, with a four-course barbecue including octopus and lamb belly. A spacious secret garden out back will be fully covered and heated by late summer to allow full autumn service (with social distancing).
• spaceseven.co.uk

The Merman at the George & Heart, Margate 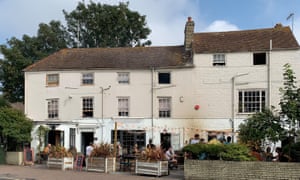 For years before Margate came into vogue, this prominent King Street landmark pub was the Indian Princess restaurant, evolving into Dev Biswal’s Ambrette (since relocated to the seafront). Taken over last December by Kelly Love and Dan Williams, who previously ran the tiki bar at the Ibizan-style Sun Deck, the building has now been restored to its early 18th-century coach house roots as the George & Heart. Throughout summer, food has been served in the roadside courtyard by former Dreamland executive chef Jim Thomlinson – now the self-styled Merman – and revolves around barbecue flavours smoked with Kentish cherry wood, applewood and grape vines. Try the cedar plank trout with trout caviar and Jersey Royals; better still is the picanha steak (a Brazilian cut) with sourdough flatbread, smoked garlic yoghurt and spicy green herb salsa.
• Plates from £6, georgeandheart.com 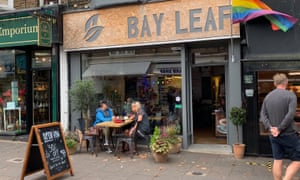 Whitstable’s underrated neighbour, Herne Bay, is well known locally for its vegan and vegetarian options. This Sri Lankan cafe is a couple of streets back from the seafront, so it makes sense that owner Chanaka Dilushan Dewage and husband Harry Marsh have embarked on a summer pop-up in the previously boarded-up Cookhouse cafe by the pier. Street food specials include twists on seaside takeaways, such as cod goujons or scampi bites with coconut curry sauce, and “loaded” fries. Or try the huge and hearty burrito filled with Sri Lankan curry (chicken, tuna, or jackfruit), rice, crunchy salad and a tangy coconut sambol . Their seafront restaurant is due to open later this year.
• Mains £6.50, on Facebook