Home » Travel » This is an epic adventure, 11 women canoeing for 40 days in the wilds of Canada

Muskeg is a delight unknown to many and it’s not easy to identify. Step in it and it creates a farting noise, then engulfs your leg. If you’re lucky you will only sink up to your ankle, but often much more of you goes in. It consumes shoes, it rips off socks and sometimes you need help to get out. It’s a dark tar-like substance, probably with a lot of beaver poo in it.

I don’t know what the exact botanical definition is, but essentially muskeg is a floating peat bog. It’s sphagnum moss and a lot of decaying vegetation. It’s a large thing of mud that’s stinky and out here in the taiga of northern Quebec. I’m surrounded by it. The coniferous forests of this subarctic region are crisscrossed with thousands of lakes, rivers and bogs, and the spongy ground often conceals sinkholes, which makes walking arduous and a little dangerous. 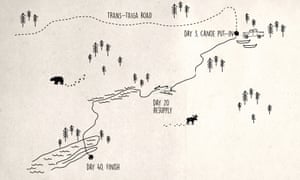 Right now I’m in a canoe, safe from muskeg for the time being. I’m paddling the Eastmain River with 11 other women, and ahead of us are seemingly endless white-tipped choppy waves. My hood is cinched tight as rain drips from my nose. Relentless headwinds rock and roll our small wood and canvas vessel while the gunnels sit low in the water under our heavy load. Despite the fact we are paddling downriver, the wind is so strong that if we stop paddling, we are pushed back upstream.

I am bowman, sitting in the front of the canoe, and though one of my responsibilities is to keep a lookout for rocks under the surface of the water, I find myself occasionally allowing my wind-stung eyes to close. My paddle strokes barely falter as I collect micro-sleeps. It’s repetitive and trance-like, and in those moments I realise it’s one of the first times I can’t hear anyone singing. 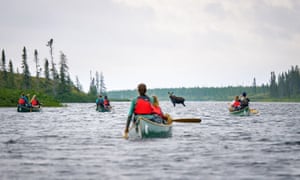 This is an epic adventure, 40 days in the northern reaches of Quebec, travelling with traditional tools including wood-canvas canoes and fire irons for cooking over an open fire. It is a trip filled with unknowns for me, but there is one thing of which I’m sure: the 11 young women I’m travelling with, nine of whom are teenagers, will not see each other at their best. They are bug-bitten, cold and boob-deep in muskeg bog and have to carry an incredibly heavy canoe on their heads.

My primary role on this trip is filmmaker, but I ask myself numerous times how on earth I got here. As with most of life’s grand adventures, the seeds of it were planted many moons ago. I’d received an email out of the blue from a stranger in the US. Maxine had seen a recent film of mine about the size of my thighs, swimming in cold water and learning to love my skin again, and wanted to tell me about young women doing hard things in a magical and remote region of Quebec.

As I delved into this story, I wanted to find out why an all-girl group would gather every summer on a small island and paddle for six weeks through a wilderness of streams, lakes, rivers, mudholes and muskeg bogs. Ultimately their sights are set on Hudson Bay.

At the heart of this story is a summer camp – but not the kind most people know. This one is called Keewaydin, the second-oldest operating summer camp in North America. Its vision hasn’t changed since it was established in 1893: “a program focused on wilderness canoe tripping, with minimum time spent in base camp”. In its first 105 years only boys got the chance to go tripping, but in the past two decades girls have joined the ranks. I’m interested in how something established more than a century ago to promote manliness and “roughing it in the woods” can be relevant for teenage girls today. I wonder what kind of teenage girl would want to forgo life’s luxuries to spend a summer in the wilderness – but also know that, as a teenager, I probably would have been one of them. 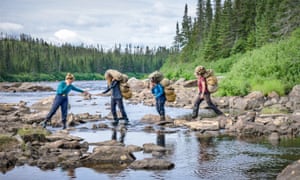 Fast-forward two decades and I am one of them. I’m also more than twice their age, hurtling toward 40; the youngest of the nine girls is only 15. The girls’ youthful shrieks, goofiness and boundless energy are a constant reminder that I am – relatively – old. Whereas their teenage bodies seem to rebound from precarious twists and tumbles over rocks and tree roots, I’m acutely aware that a twisted knee on a portage (an overland trail where we carry our canoes and gear between lakes or to avoid an obstacle in a river) might mean lingering pain for months, not just a day or two.

The style of tripping is counter-cultural, its essence slow and purposeful. The group equipment is the same style as that used over 100 years ago. We cook on open fires and the loads we carry are canvas duffel bags and wannigans – large, sturdy wooden boxes. Gear is portaged using tumplines – leather straps worn on top of the head, aligning the weight down the spine rather than on shoulder straps. And we paddle in beautiful wood-canvas canoes following centuries-old routes. 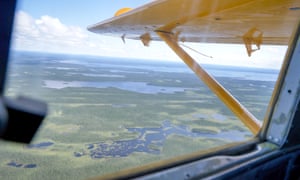 I don’t think it’s an overstatement to say Canada was born on the back of a canoe. The First Nations people built birch-bark canoes and then showed the non-indigenous people who came over how to travel in them. Birch-bark canoes were in turn used as the template for the wood-canvas canoes developed in the 19th century, when demand for boats outstripped the supply of birch bark.

Demand for canoes had risen because in 1670 King Charles II of England signed a Royal Charter governing trading rights in the Hudson Bay watershed. The charter served as the original articles of incorporation of the Hudson’s Bay Company and stated that the company was to control all lands whose rivers and streams drained into Hudson Bay – an area comprising more than 1.5m square miles, about 40% of modern-day Canada. Of course, it’s a dubious claim that the King of England’s signature on a piece of parchment could effectively bestow sovereignty over such a vast land and ignore the indigenous people who already occupied that land. Regardless, the charter did lead to the establishment of large outposts where pelts and furs were traded. 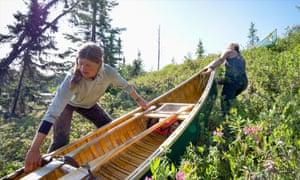 Consequently, much of the story of Canada’s fur trade unfolded along its many great waterways, with canoes the dominant transportation carrying goods and fur to the ports of Hudson Bay. Indigenous hunters, early explorers and adventurers tirelessly paddled their canoes in search of furs, travels that led to the mapping of Canada’s lakes and rivers.

It’s on these trails and transportation routes that we travel today. As we paddle the majestic Eastmain River we’re in indigenous Cree territory. When searching for a portage, we look for a blaze on a tree made with a single axe cut, or even strips of a bandana marking the path. 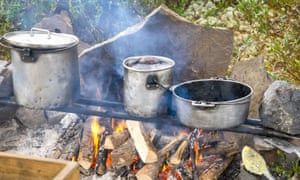 Having spent the past 10 hours paddling, lumbering and lumping our canoes and gear, we are beat. At the start of a dank and buggy portage we have decided to bushwhack our own campsite and I have found a hummock with a spot just big enough to fit my tent lengthways between two large mossy rocks. As I pitch my tent, I wonder what the point of it all is. Where is all the fun? Why are these teenagers here? Then through the bushes I hear one of the girls exclaim, “It’s perfect!” In that moment I realise two things. First, the camp spot they have just found is anything but perfect. And second, it’s all about perspective. I really admire these girls for their cheerful optimism – and their non-stop singing.

On several days we wake at 5am and don’t get to the next campsite until 8pm, still with several hours of chores to do – chop wood, erect the fly, make dinner, bake bannock (a type of bread inherited from early settlers and fur traders) for tomorrow’s lunch, pitch tents, wash pots and dishes … sleep. I watch in awe as young women carry heavy loads down mini rock cliffs. But the best bit is witnessing the fun, laughter and lightness thatbubble up when women get together far from the stresses of everyday life. It’s empowering to be surrounded by women all proud and happy to be using their body for strength. To be sweaty and dirty is expected. 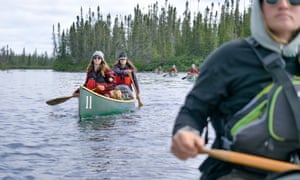 This is not a trip fuelled by adrenaline – although paddling through large rapids in a wooden boat and catching a metre-long pike does provide that. It’s really about appreciating the slow purposefulness of wilderness travel.

One day, mid-paddle, there’s a seminal moment when I take off my bra, deeming it surplus to requirements. Adios chafing! Slowly, I realise I’m beginning to feel comfortable with being uncomfortable. I’m not resisting any more. I’m finding my groove. Despite the hard work, I begin to enjoy canoe travel and the rhythm of life on water. From the seat of my canoe I am often fully immersed in introspective feelings, which leads to a lightness on my shoulders and an ebbing of my woes. With days following a pattern, we find our rhythm. Life becomes simple and fundamentally essential. 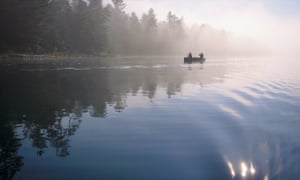 There are easier ways to take a canoe trip. Sending your child off in a hand-built canoe, with wooden boxes filled with heavy tin cans just as they did more than 100 years ago, might seem a little contrived. But if you’re going to travel on lakes and rivers, through vast landscapes and be among the quiet and the weather and all of it … why not give yourself time to be in that space? If our only goal is to go from A to B as fast and easily as possible, then perhaps some value is lost.

I enjoy my time unplugged and in the wilderness – my chance to tap into that elusive something that seems to be missing from our modern lives. And I’m proud to be part of a small club of people who not only know what muskeg is but have been stuck knee-deep in it.

This is an edited extract from Tough Women Adventure Stories, published on 13 August (Summersdale, £9.99). Hannah Maia’s film, Wood on Water: An All Girl Canoe Tripping Documentary, is due for release this year