Cat, from Manchester, is sitting by the pool, while her husband splashes with their three-year-old daughter. ‘We booked last minute, and I had no idea we were the guinea pigs,’ she says.

They are — as I am — part of a 500-strong vanguard of British tourists on chartered TUI flights to Ibiza, followed by Ryanair, which has flown in 250 grateful lockdown escapees from Liverpool.

‘We’re not stressed about coronavirus,’ Cat says. ‘It’s common sense, really. I always carry sanitiser and wipes, and people still went on holiday before the flu jab was invented. It’s no big deal.’ 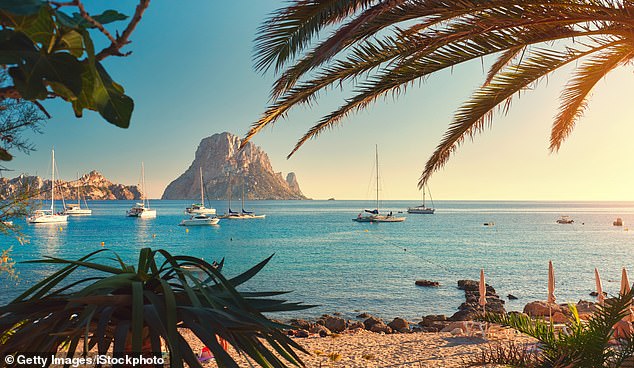 Island beauty: The view from Cala d’Hort beach, Ibiza. The White Isle is back, but don’t expect to experience its famous rave scene, says Mark Porter

Yes, the White Isle is back, but don’t expect to experience its famous rave scene.

Some of our party filing across the lobby of the TUI Blue Aura hotel, near San Antonio, on the north coast, is already well tanned and there’s a very fine collection of tattoos on show.

Yet this is a family hotel. In the evening, a band plays only until 9.45pm. People then gather at the bar, but not for long — a far cry from an all-night rave.

The next morning, body temperatures are taken by zappers aimed at our heads before we are allowed into the breakfast buffet. Courteous chaos ensues, like a tea dance, as people manoeuvre awkwardly in search of muesli and bacon.

‘You have to try my omelette before you die,’ says Ales, manning the egg station. I laugh nervously and ask if he is worried about coronavirus.

‘Yes, but we have no choice but to work. Tourism is the only business here and if we don’t work we starve,’ says the 37-year-old.

Ricardo, the hotel manager, later tells me there are zero cases on the island — which is reassuring.

For years, Ibiza was the discreet escape of the British film set — Sir Laurence Olivier, Terence Stamp and Terry- Thomas. They were followed by European hippies, then it was discovered by the fashion crowd, who in turn attracted more celebrities. Then the big money followed.

Now, it’s the place to meet Hollywood power couples such as Michael Fassbender and Alicia Vikander, or Katy Perry and her fiancé Orlando Bloom. You might find yourself queuing at the shops next to the likes of Jade Jagger, Cristiano Ronaldo or Lionel Messi.

Yet this year you may miss them all: face masks became obligatory on Monday, except poolside and in restaurants. At bars, one is required if you are less than 1.5 metres from someone else, although they can be lowered to slurp your drink.

Locals observe the Covid codes strictly but some Britons, I notice, seem to need a drill in coronavirus etiquette. 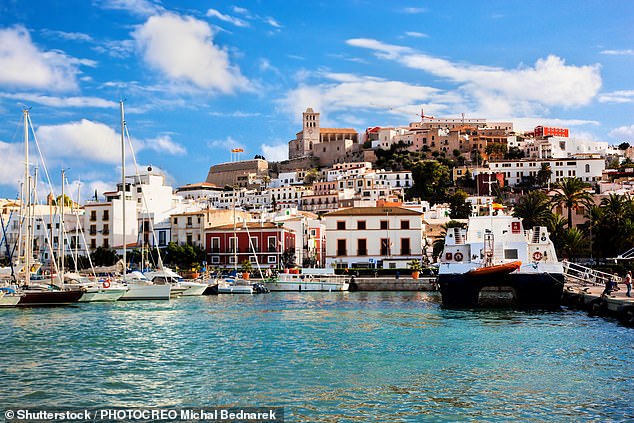 In Ibiza, pictured, face masks became obligatory on Monday, except poolside and in restaurants

Most make no attempt to wear masks in the hotel, unlike the German holidaymakers who are punctilious.

I set off in a hire car to scout the island. At San Antonio, popular for clubbing, everything is locked up for the season.

Just outside Ibiza Town, a down-at-heel complex is fenced off, looking like a redundant theme park. Welcome to Amnesia, one of the world’s foremost rave venues.

Two men on mopeds pull up beside me. ‘We last came here 20 years ago,’ says 47-year-old Alan Taylor, a gas engineer from Wrexham. ‘We had some great times. What a scene. It’s all rather sad everything is shut.’

Alan and his old friend, Matt Hughes, 46, a paramedic, also from Wrexham, flew in with eight pals on Ryanair for a stag do: ‘There was no distancing, no tests and the plane was full. No one was wearing a mask because everyone was drinking.

‘Once people start drinking there are no rules. There was a roaring trade in alcohol. I feel sorry for the locals because they’ve really got it coming to them. Soon there could be ten of these flights a day.’ 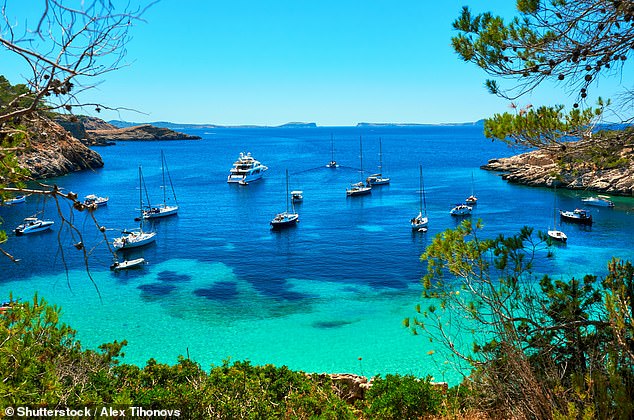 Seven nights’ all-inclusive stay, at TUI Blue Aura, is from £758, based on two adults and two children. Seven nights’ stay at Ibiza Twiins, near Ibiza Town, is from £770 pp (tui.co.uk).

In Ibiza Town, it is a joy to walk through the now-peaceful fortified old quarter, peering down at the Necropolis. Here celebrities from the Phoenician age elected to be buried in hypogea, tombs burrowed into the sandstone, some from the 7th century BC.

Their reason for doing this? There are no snakes and scorpions on the isle. These were judged detrimental to a smooth passage into the next life.

The Moors and then the Spanish also left their imprint. At the 14th-century cathedral, Our Lady of the Snows, I enjoy the collection of art spanning seven centuries, feeling drawn to the cooling presence of this squat yet magnificent retreat.

Last year, 3.5 million tourists flooded Ibiza. The contrast between then and now could not be more marked.

Beaches are peaceful. The thud of drum and bass has gone. Enjoy the White Isle now, without the noise and the crowds . . . as Sir Lawrence and the hippies once did.