Home » Travel » There's more to it than rugs! The joys of magical Marrakech

There’s more to it than rugs! The joys of magical Marrakech, from a hotel Churchill called ‘the loveliest spot in the world’ to a thrilling rush-hour tour in a motorbike sidecar

The call to prayer from Koutoubia mosque bellows out across the city. It is late afternoon rush-hour in Marrakech during Ramadan, and on the street the sound is of noisy, exuberant chaos as everyone heads home to eat after a day of fasting.

Our motorbike with sidecar weaves in and out of dusty old trucks laden with boxes of mint and thyme, buses are stuffed with passengers and mopeds seem to come at us from every direction, horns tooting.

Somehow birdsong rises above it all and the sun burns on as we pass the pink walls of the medina and out to La Palmeraie – a quiet road encircling the city, and a boundary with the desert where villas owned by Arab royalty and European millionaires are concealed by lush walled gardens. 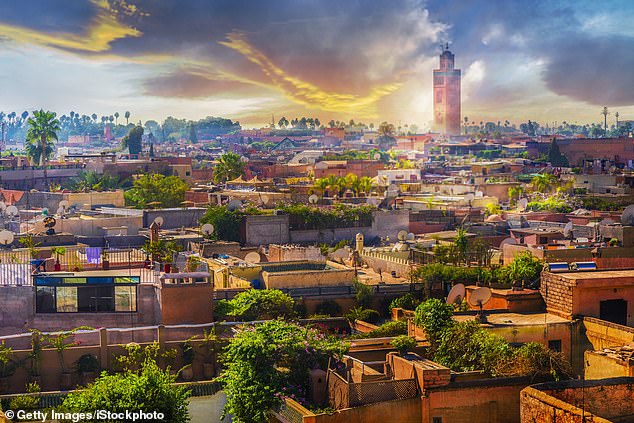 Mystical: Sarah Hartley first discovered the joys of Marrakech 20 years ago. Pictured above is the city’s Koutoubia Mosque, overlooking the roofs of the historic medina 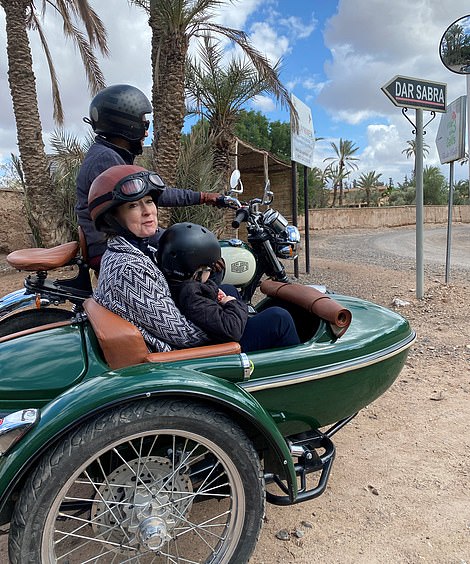 Sarah on her sidecar city tour, which she says was ‘like the best (three-hour) fairground ride’

We pause to admire the barren landscape ahead and the lights of Marrakech behind. Hussein and Agnes, our guides on the two bikes, remove their helmets and no longer need to shout.

Whoever thought of sidecar city tours is a genius. Snugly reclined in robust leather upholstery, it felt at once exhilarating yet safe, like the best (three-hour) fairground ride. In turn we giggled and gasped at the sheer scene unfolding at speed and the hilarity of our goggles and helmets much admired by the waving, pointing Marrakechi.

My first visit to Marrakech was more than 20 years ago, and it fast became my go-to escape so that when life fell flat or grey, I’d dive back into it for a short, sweet dip. And each time I came home with a predictable purchase: a rug.

If colour soothes the soul and scent awakens it, then this mystical, magical oasis less than four hours from London tantalises every sense.

The heartbeat of the city is the historic medina, where the charms of Jemaa el Fna, its main square and market place, have somewhat eroded over the years. You won’t get filthy toes any more – it’s almost pedestrianised – but there’s still the false-teeth stall with a man wielding pliers for any strays left prior to fitting, clusters of snake-charmers and women ready to henna your hands. On my last trip, the age-old hassling of tourists was not rife, and with a guide you’re practically invisible.

A sunset cocktail taken at a rooftop bar above the square with flame-eaters, music and food market lacks any authenticity but it’s still a fun tick-box for most visitors.

Wander deep into the alleyways of souks and there’s a gut-churning odour of hanging meat, with trickles of all sorts running in little rivulets down the cobbles. Every dark quarter is crammed with tempting exotic wares – spices piled high, leather, copper pots, woven baskets, jewellery, ceramics, fabrics and shoes. Oh, and rugs, of course.

When it comes to culture, early birds are winners at Bahia Palace, which dazzles before the big tours flood in, so head here smartly after breakfast. Our guide shared tales of 19th Century Morocco where royal children and slave children were educated by the same tutor. You’ll touch intricate geometric hand-carved tiles, find lemon trees in the cool interior gardens and discover that little fountains were placed in the sultan’s private offices so the burbles would mask the secret whispers between him and whoever he was entertaining from his harem.

Make your next stop the gardens of Jardin Majorelle, which feels more vivid with each visit, especially after a dull English winter. Go if only for a boost from the sharp electric blue and yellow emblazoned over every surface from walls to ceramic pots. 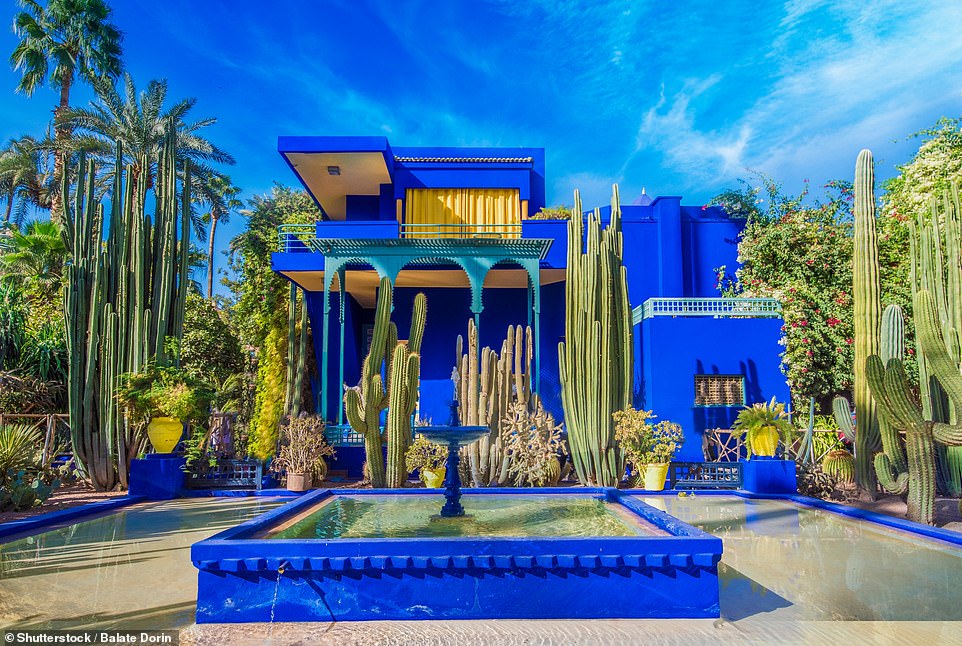 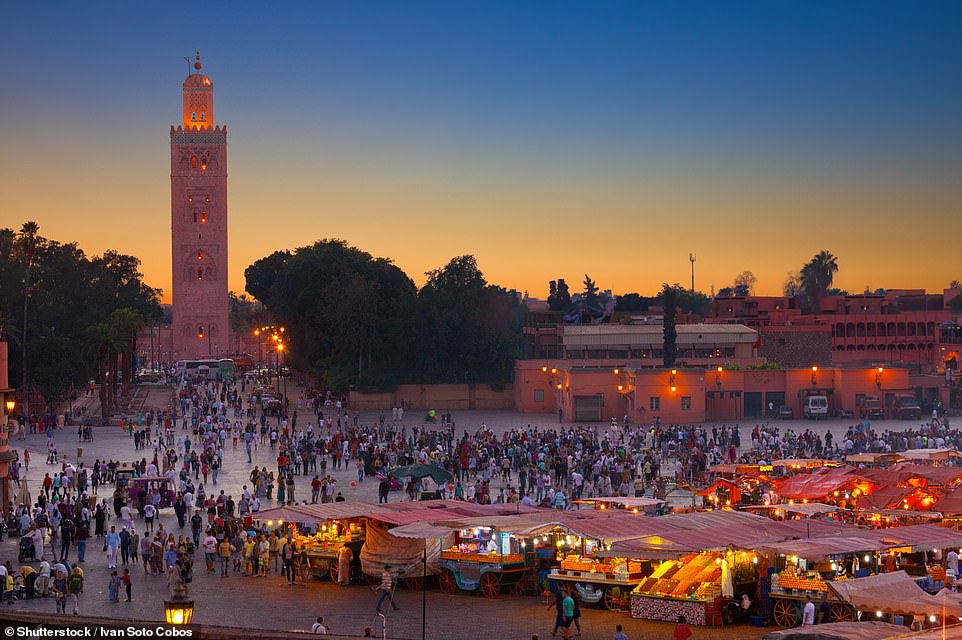 The heartbeat of Marrakech is the historic medina, says Sarah, ‘where the charms of Jemaa el Fna (pictured), its main square and market place, have somewhat eroded over the years’ 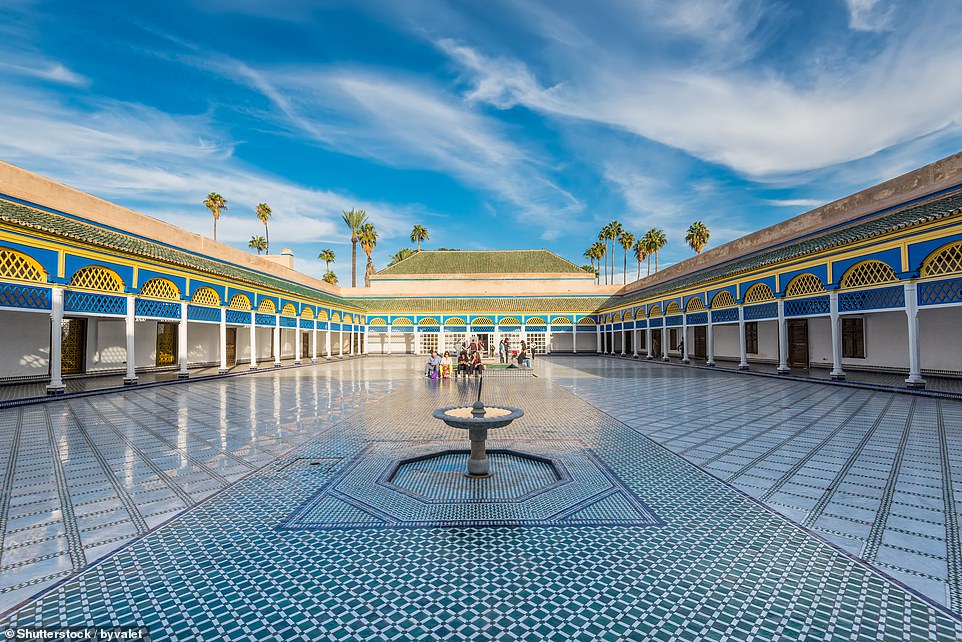 At Bahia Palace (pictured), Sarah heard tales of 19th Century Morocco ‘where royal children and slave children were educated by the same tutor’. While there, she adds, ‘you’ll touch intricate geometric hand-carved tiles, find lemon trees in the cool interior gardens and discover that little fountains were placed in the sultan’s private offices so the burbles would mask the secret whispers between him and whoever he was entertaining from his harem’

The garden was created by the French artist Jacques Majorelle in 1923, and after his death in 1962, fashion designer Yves Saint Laurent fell in love with it – and Marrakech – and saved it from hotel developers. A little gem of a museum is now attached to the gardens, dedicated to the designer where displays of his collections illustrate the creative influence the city had on him.

The bucket-list place to stay in Marrakech is La Mamounia, which since 1923 has had an impeccable reputation for luxury and glamour – a tricky position to hold, as young pretenders are always poised to topple it.

Even after a lavish refurbishment, it is so comfortable in its own skin that it’s impossible to walk through the doors without relaxing too. Inside is dark, upholstered and so heavily scented that orange blossom and dates will stay with you, as will the aroma of rose posies in vases on every surface. That scent will linger long after you return home, and you will miss it. 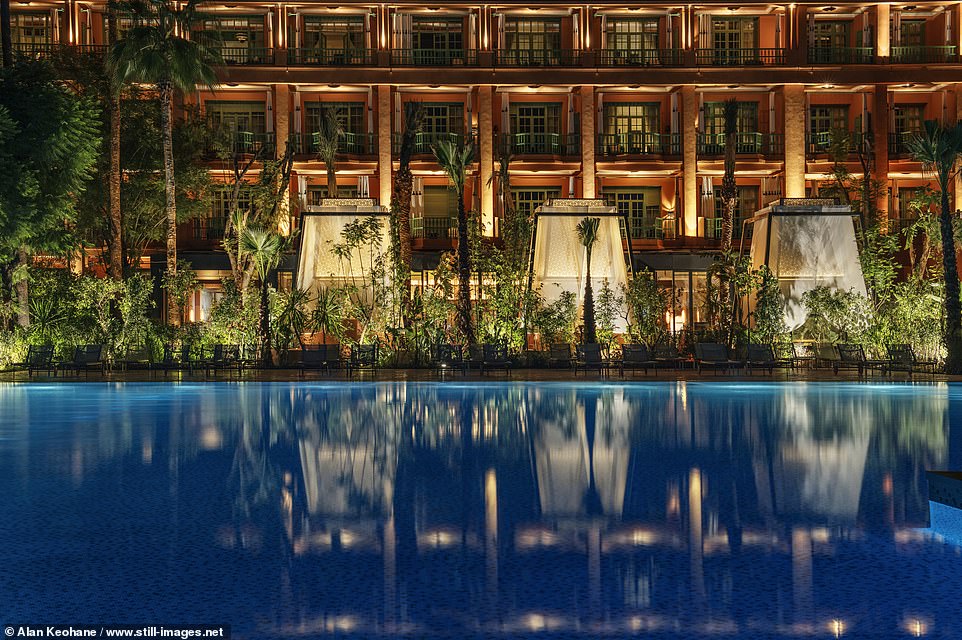 Sarah’s accommodation was the ‘bucket-list place to stay’ in Marrakech – La Mamounia (pictured). She says that since 1923 the hotel ‘has had an impeccable reputation for luxury and glamour’ 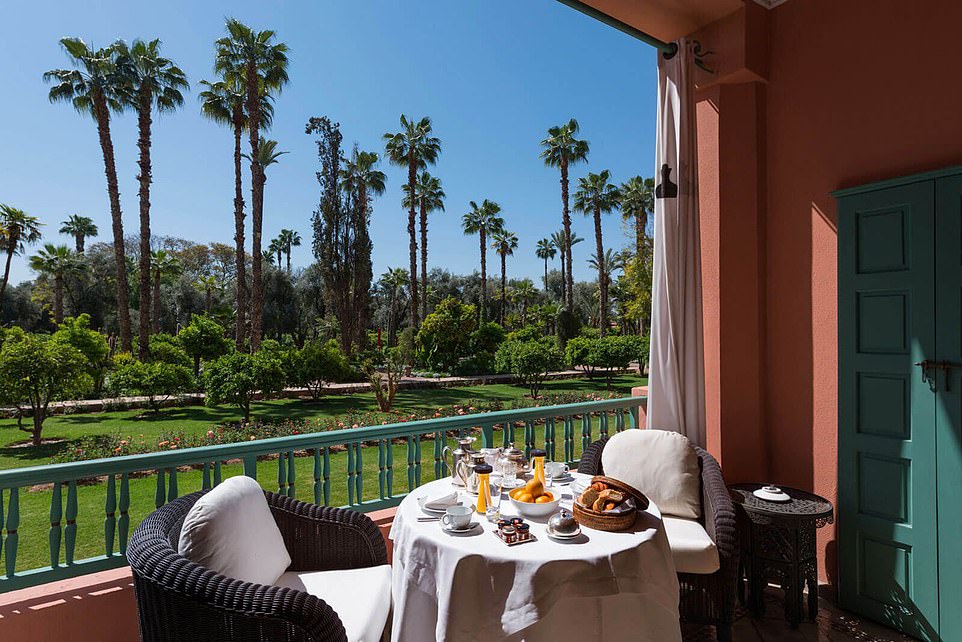 Pictured above is Sarah’s garden room at La Mamounia. She writes: ‘If Art Deco is your thing, you’ll be absorbed by the interiors’

If Art Deco is your thing, you’ll be absorbed by the interiors – there’s ebony lacquer on tables, intricate marquetry and exquisite hand-made tiles which will have you touching them just for their sheer lustre. And stained glass here is a constant motif, whether in a secret alcove or ceiling, window or door, with sapphire and cinnamon glows casting shadows on the rugs.

The same intricate touches and scents flow through the rooms.

It is pitch-perfect (how rare), a precedent set by a staff so well trained that it feels like a film set. The scene is discreet, affluent and very French.

For men, it was all leonine hair to the collar and shirt cuffs turned up just so with shorts. While you won’t spot much cosmetic surgery on show around la piscine, there were multiple outfit changes, which is fun to join in if you’ve crammed a suitcase full of Heidi Klein bikinis and kaftans. And, curiously, no one bothers with people-watching, which makes it all rather relaxing. 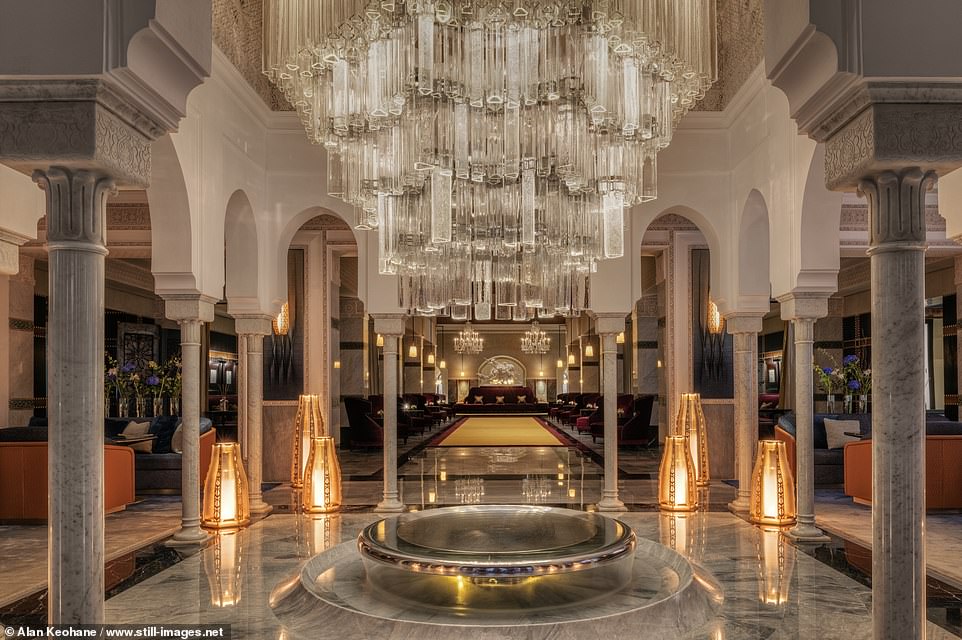 Churchill called La Mamounia ‘the loveliest spot in the world’. Sarah, meanwhile, says the staff are ‘so well trained that it feels like a film set’ 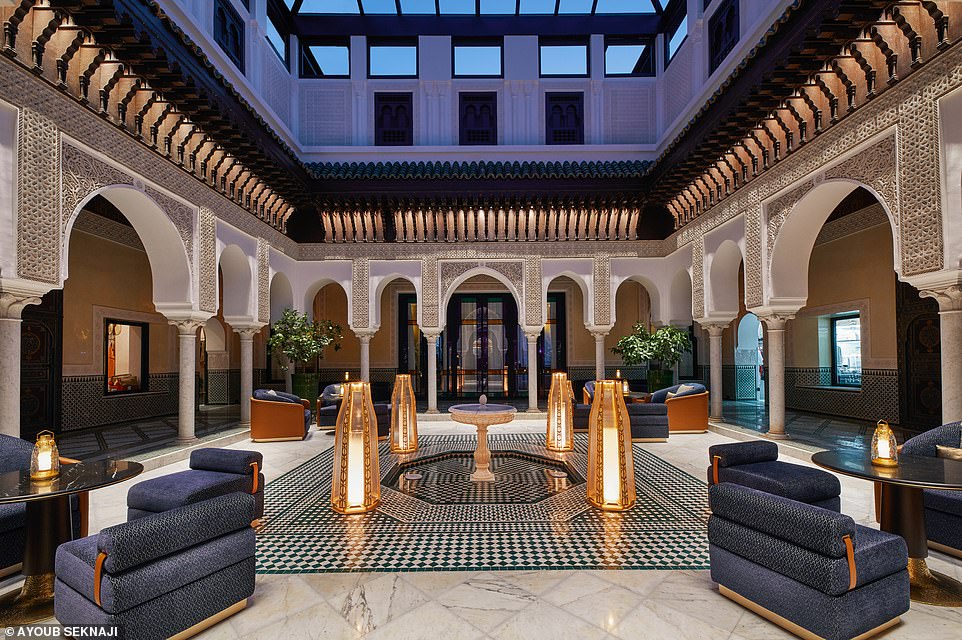 Sarah writes of the La Mamounia interior: ‘There’s ebony lacquer on tables, intricate marquetry and exquisite hand-made tiles which will have you touching them just for their sheer lustre’ 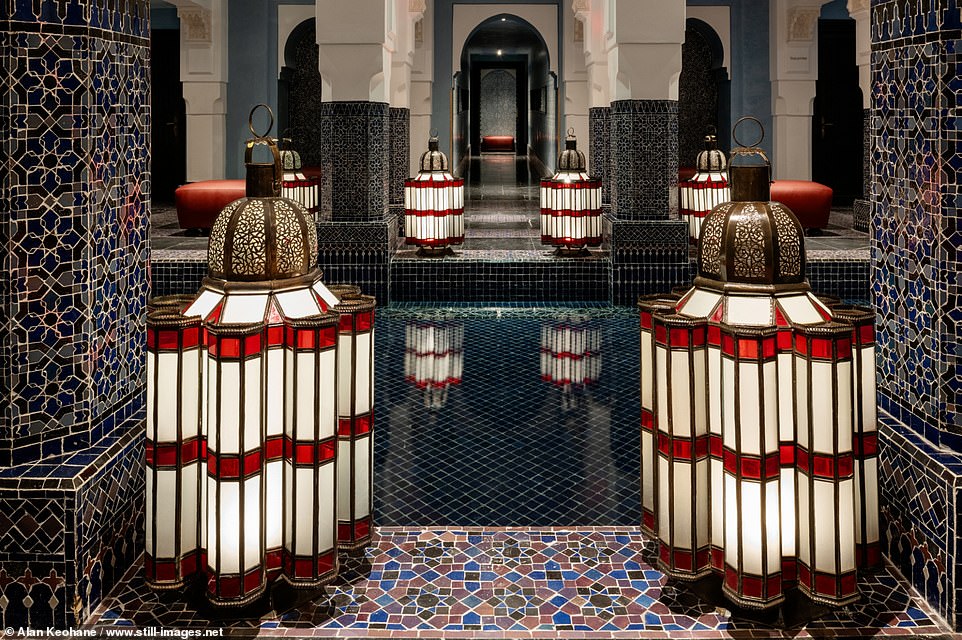 At La Mamounia, ‘no one bothers with people-watching’, reveals Sarah – ‘which makes it all rather relaxing’. Pictured above is the hotel’s spa 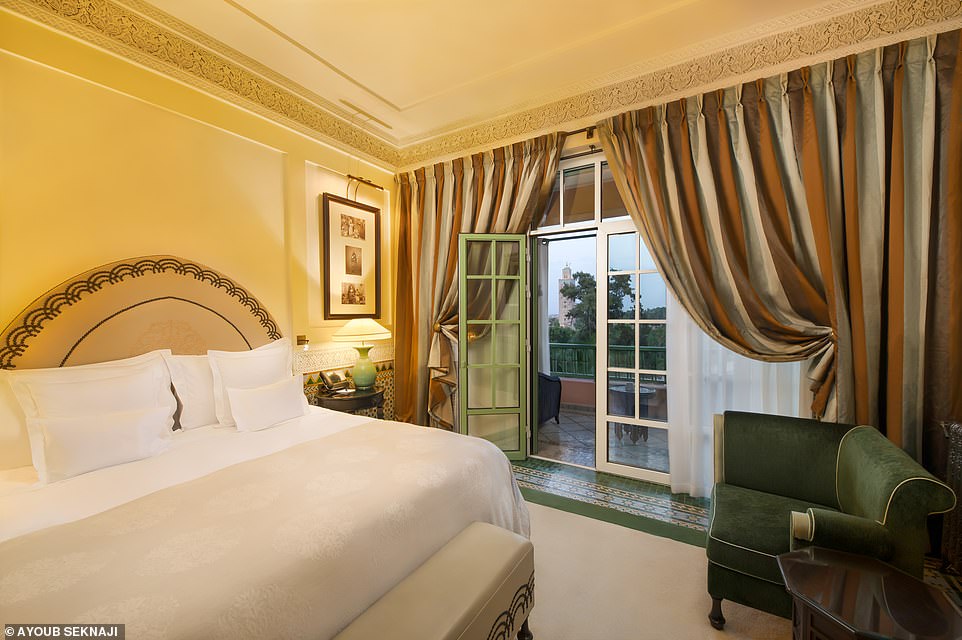 ‘Even after a lavish refurbishment, La Mamounia is so comfortable in its own skin that it’s impossible to walk through the doors without relaxing too,’ writes Sarah

Dinner is incredibly romantic here, in part thanks to the lightest of lighting, whether taking the lantern-lit path to the Moroccan restaurant (expect a feast with musicians playing) or Italian restaurant.

But the most popular meal of the day is breakfast. Fresh pancakes with honey and lemon, fresh orange juice, strong coffee, sweet sticky dates, almond cake and yogurt with platters of fresh fruit. Taken by the pool or on your balcony with a soundtrack of the sweetest birdsong is a moment you will savour.

Whether you wake early for a swim or a game of tennis, you’ll want to make peace with yourself in the world-famous gardens. Churchill called La Mamounia ‘the loveliest spot in the world’, and it’s easy to imagine him pacing the shady footpaths, admiring this love letter to roses which luxuriates in 19 green acres. 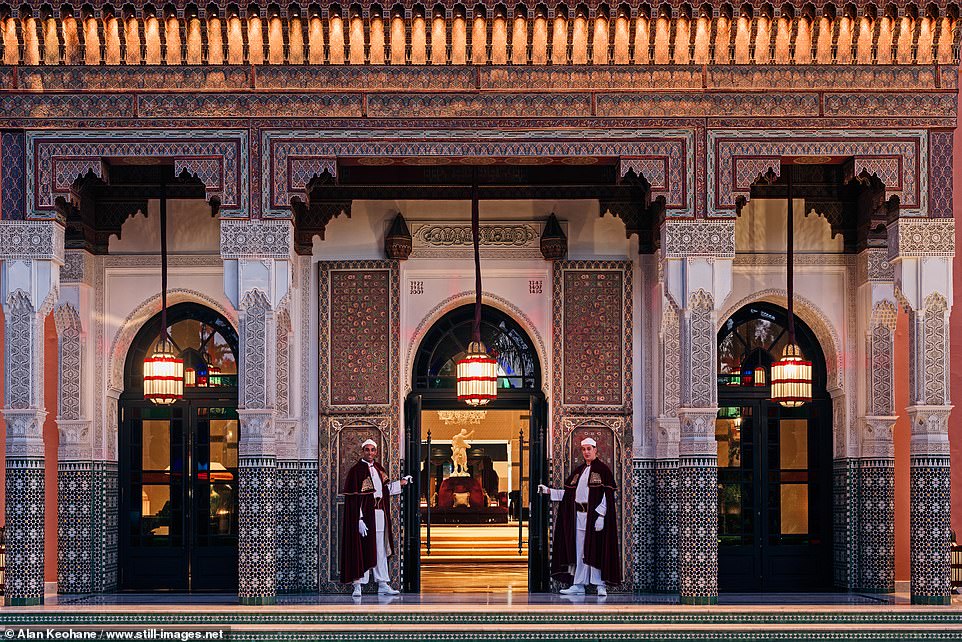 Sarah describes ‘the scene’ at La Mamounia as ‘discreet, affluent and very French’ 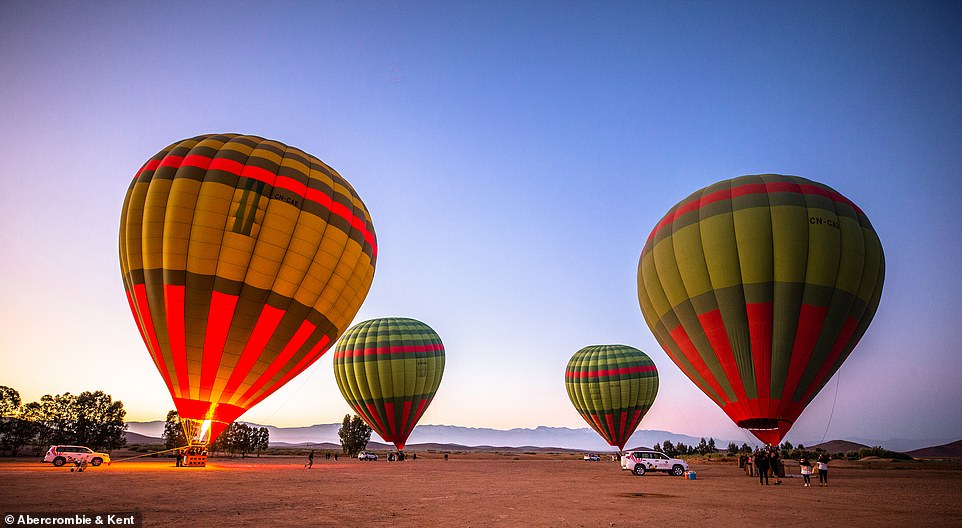 Let there be flight: Sarah soared over the foothills of the Atlas Mountains in a hot-air balloon. ‘Even in a basket of ten guests, we were as silent as the landscape, camera phones paused as we whispered and pointed at the sheep and smallholdings several thousand feet below,’ she writes 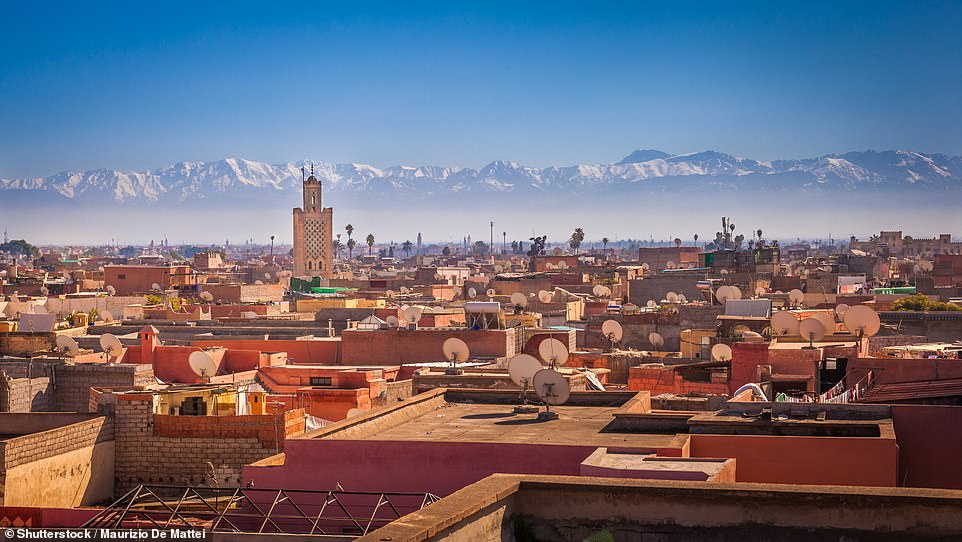 Sarah Hartley was a guest of Abercrombie & Kent, which offers a five-night holiday to Marrakech from £2,499pp based on two people sharing. Includes flights, transfers, accommodation at La Mamounia in a Classic Room, sidecar experience, hot-air ballooning and guides (abercrombiekent.co.uk).

If you want to extricate yourself from this heady bliss, take a taxi to the Kasbah and slip between the noisy stalls into a hidden alley and La Sultana hotel where The Odette rooftop bar serves cocktails among the lantern-lit garden terrace.

Or book a taxi out to Agafay desert and The White Camel Lodge & Tents, where co-founder Abdel Benalila has created a special spot for honeymooners to snuggle around fire pits waiting for the sun to set over the craggy outcrops. Zero light pollution means you can spot flickering lights dozens of miles away. Recline on kilim cushions, watch the damp air meet the heat of the day and sip on a dry martini. ‘Would you like a ride on a dromedary?’ asks Abdel. Why not? It’s that kind of holiday. Fun fact: there are no camels in Morocco, only dromedaries, which have one hump. Then dine among other guests in the tented restaurant on sweet tagine of lamb with almonds, which tastes as delicious as you imagine.

Another sort of beauty can be found high above in a hot-air balloon experience, which sets off horribly early to catch the sunrise over the desert at the foot of the Atlas Mountains. Even in a basket of ten guests, we were as silent as the landscape, camera phones paused as we whispered and pointed at the sheep and smallholdings several thousand feet below.

And good luck to those who, like me, cannot resist the lure of the souks. Our guide left us unattended at the Palais Saadien emporium for only a few minutes before the mint tea went to my head (again!), and even with no intention of buying a rug (again!) it was hard to argue when salesman Omar tapped furiously at his calculator until the Berber rug underfoot (‘Take off your shoes – please – and feel the warmth!’) could finally be viewed as an investment against soaring energy prices.