An adorable sea lion in California, a fearsome shark off Mexico and an epic Faroe Islands landscape: The stunning winning images in the UN World Oceans Day photo contest revealed

Wat-er beautiful world we live in.

The winners of the United Nations World Oceans Day Photo Competition 2021 have been announced, with the stunning images showcasing a fascinating spread of marine flora and fauna around the planet, from the Faroe Islands to Costa Rica.

There were six categories in the contest – The Ocean: Life & Livelihoods, Above Water Seascapes, Underwater Seascapes, Digital Ocean Photo Art, Faces Of The Sea and Oceanic Discoveries.

Award-winning Belgian photographer Ellen Cuylaerts, who curated the contest, told MailOnline Travel that there were around 1,400 entries from across the world. She added: ‘The diversity of the judges made this a very interesting year for the contest, with musician and photographer Julian Lennon and Swedish TV host Joakim Odelberg among those on the panel.

‘The images we selected evoke a feeling of places we want to be right now and want to protect. We, along with the United Nations Division of Ocean Affairs and Law of the Sea, which produced the competition, hope these images will inspire us to rebalance our relationship with the oceans. It’s time to make an impactful change.’

Dive down to see a selection of the winning images… 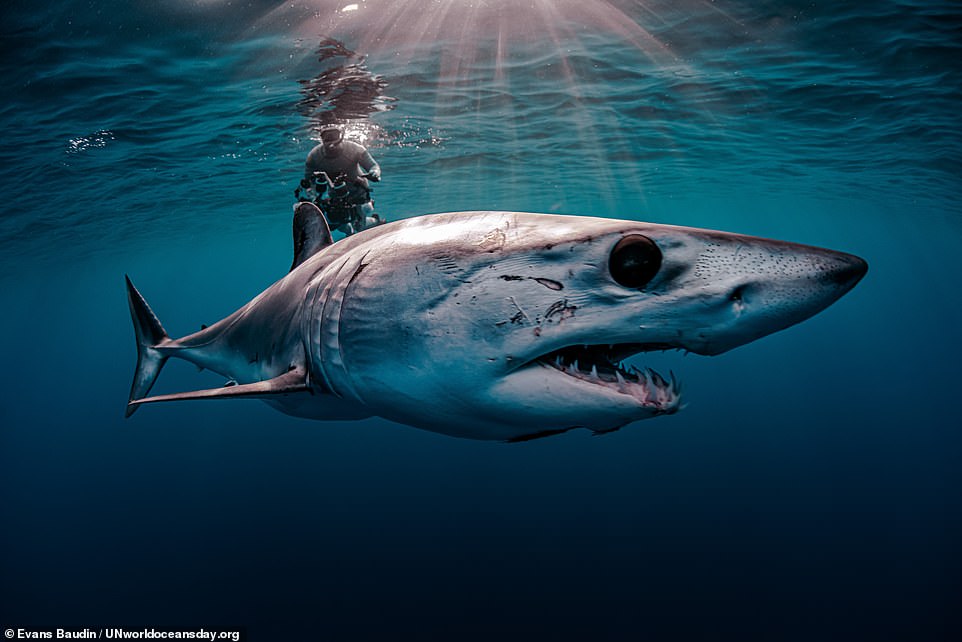 US photographer Evans Baudin took this striking shot of a shortfin mako shark off the coast of Baja California, Mexico. It came third in the Faces Of The Sea category. Baudin said: ‘It is absolutely fascinating to observe pelagic species that have probably never seen a human before. Who is watching who?’ 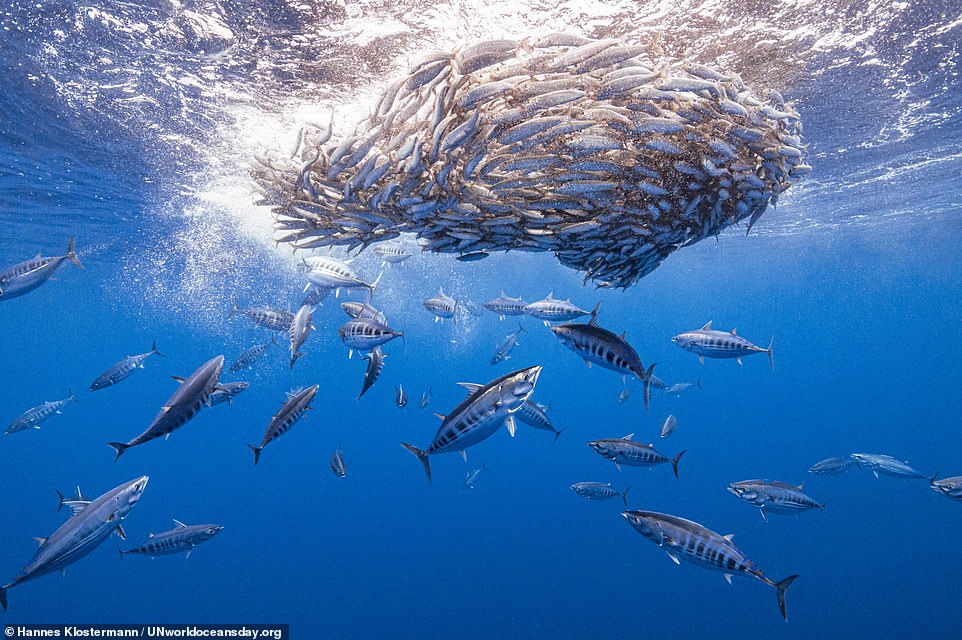 Hannes Klostermann from Germany came second in the Oceanic Discoveries category with this fascinating photo of a school of skipjack tuna preying on a sardine bait ball in the Pacific Ocean off Mexico. The photographer noted: ‘Due to the relatively large size of the prey, the tunas ended up ripping apart any sardines they caught, each taking a chunk. This image also shows the skipjack’s vertical stripes, which are only visible while hunting’ 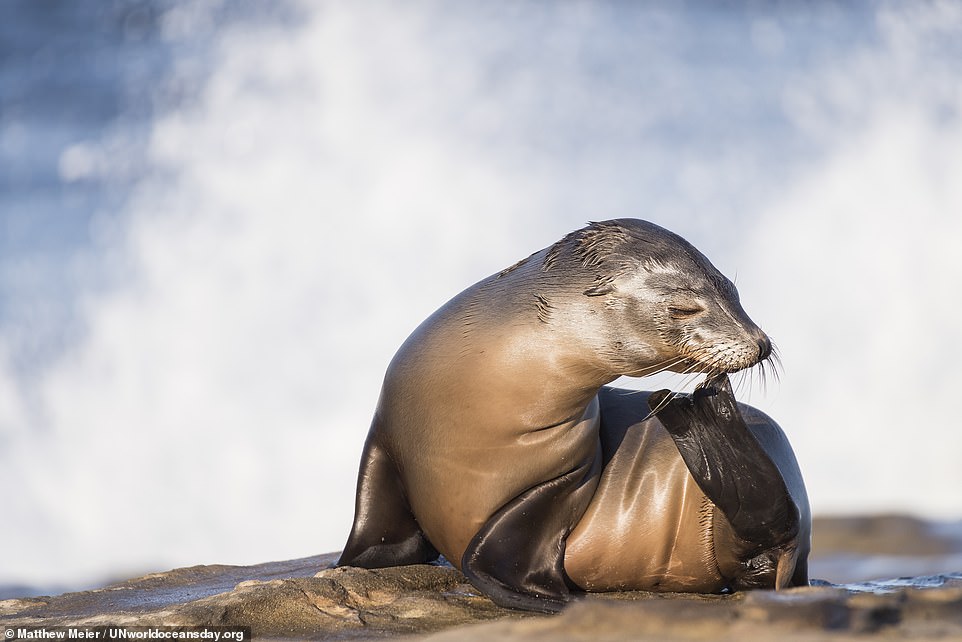 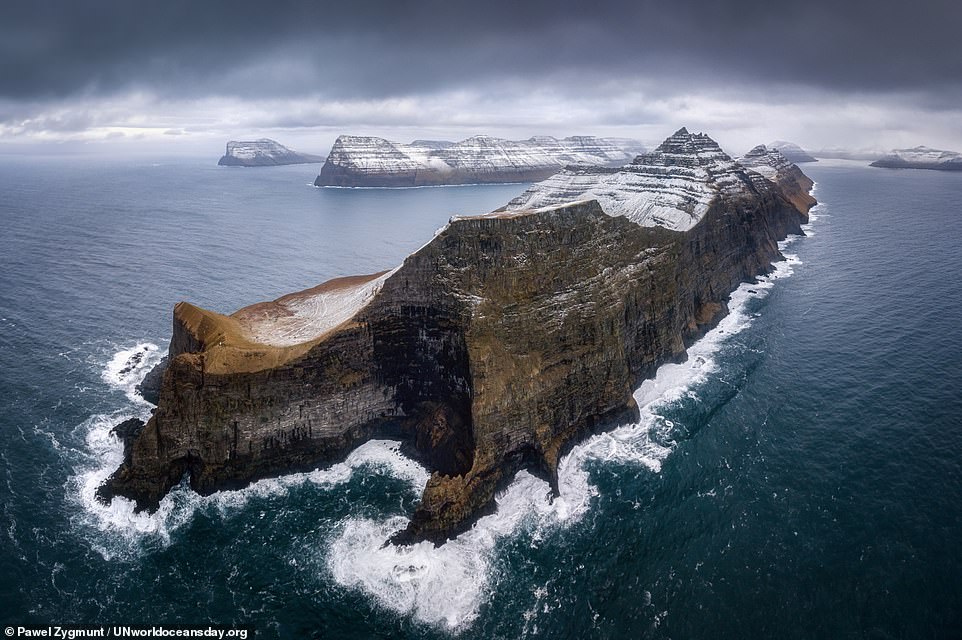 The winner of the Above Water Seascapes category was Pawel Zygmunt from Poland, who is behind this epic image of the cliffs of Kallur on Kalsoy Island in the Faroe Islands. Zygmunt used a drone to capture the scene and said the weather was ‘very challenging’. At one point, while climbing up the cliff, he was ‘pummelled by a hail storm and pushed around by strong wind’ but luckily the wind dropped and it was safer for him to explore. The photographer added: ‘I managed to capture Kalsoy Island from a slightly different perspective. In the background are the islands of Kunoy and Vidoy’ 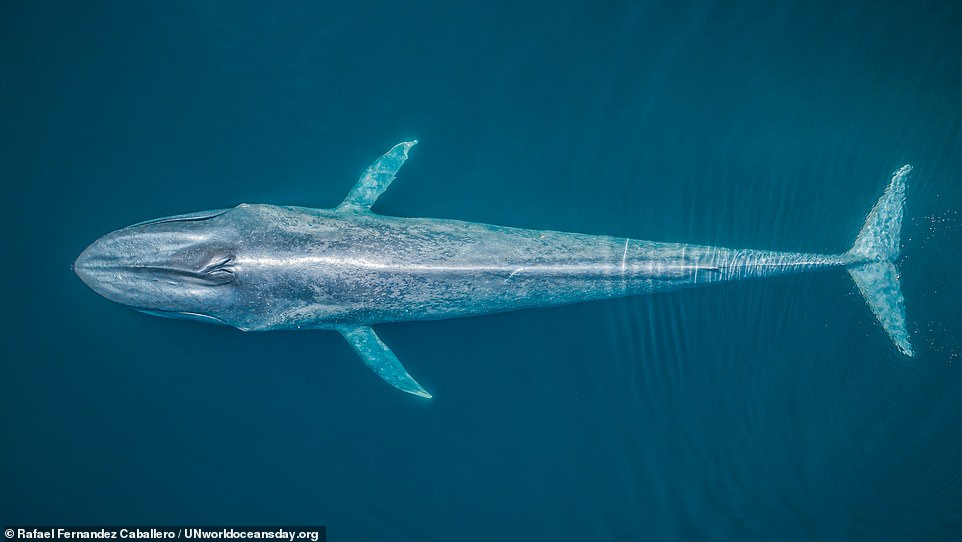 Rafael Fernandez Caballero from Spain came in third in the Above Water Seascapes category with this incredible aerial image of a blue whale. Recalling his encounter with the creature off the coast of Isla Cerralvo in Mexico, he said: ‘While sailing in the open sea, it was amazing to see the whale from far away, the sea was flat and the conditions were perfect. When we realised that it was a blue whale all the people on the boat were really excited. It was amazing to spend a long time with the huge animal, which was completely calm that day’ 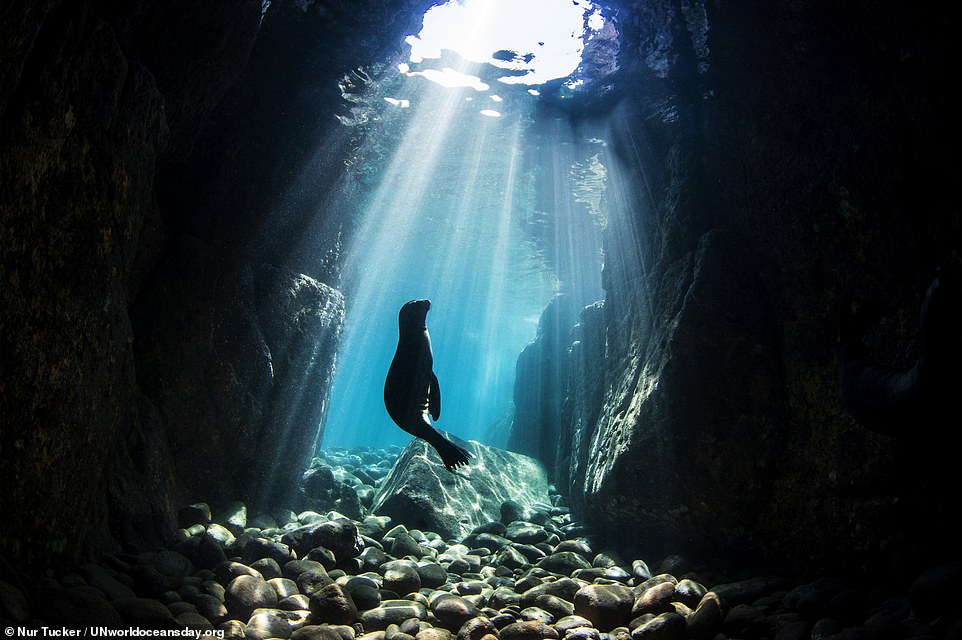 This magical shot of a sea lion pup in a cave was snapped by British photographer Nur Tucker while he was diving off the coast of Baja California in Mexico. The image earned him the gold medal in the Underwater Seascapes category 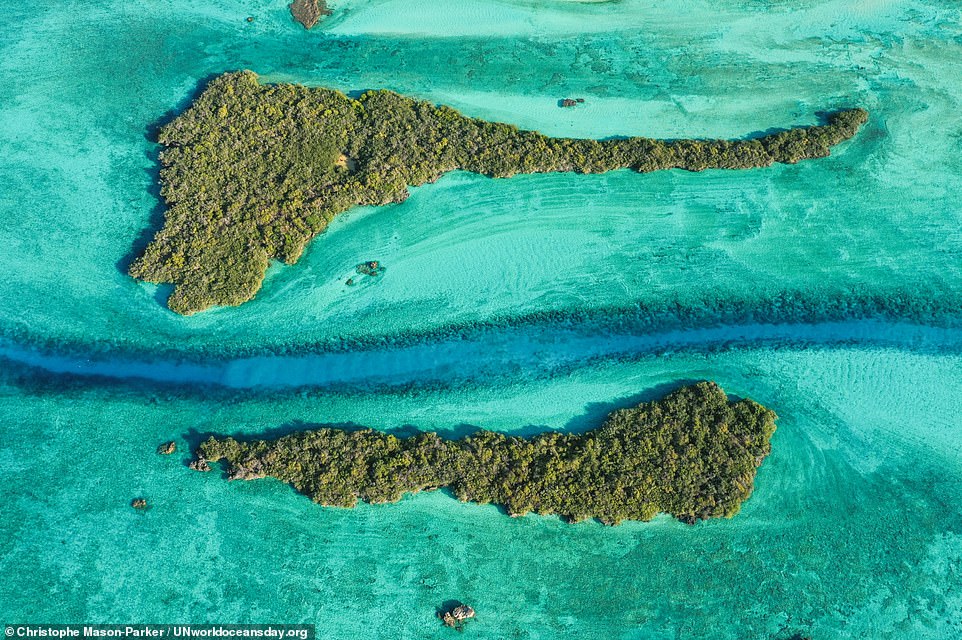 The runner-up in the Above Water Seascapes category was Christophe Mason-Parker, from the UK, who snapped this dreamy aerial shot of the Passe Dubois channel flowing between the remote islets of Ilot Emili and Ilot Yangue in the Seychelles 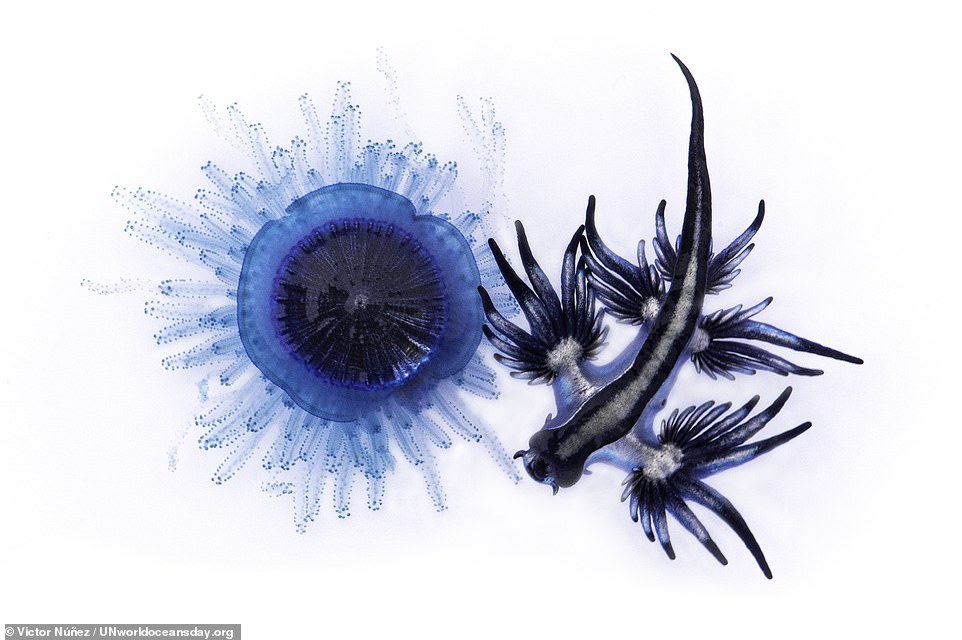 Victor Núñez from Spain received an honourable mention in The Ocean: Life & Livelihoods category for this macro shot of a glaucus atlanticus, a type of sea slug, which is also known as a blue dragon. Núñez snapped the image while off the coast of Tenerife. He revealed that the tiny mollusc gets its colour from feeding on jellyfish 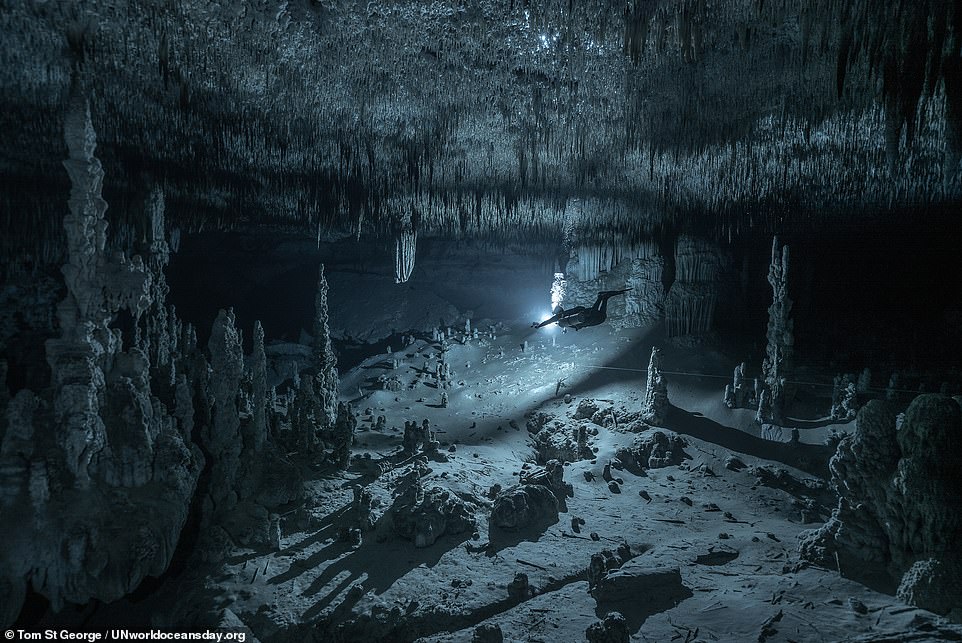 Tom St George from the U.S claimed first prize in the Oceanic Discoveries category. His winning image was shot in the Sistema Sac Actun underwater cave system off Mexico’s Yucatan Peninsula. St George says the water-filled chambers are ‘renowned for their incredible beauty and crystal clear waters’ but they are facing ‘increasing pressure from pollution and the over-extraction of water’ 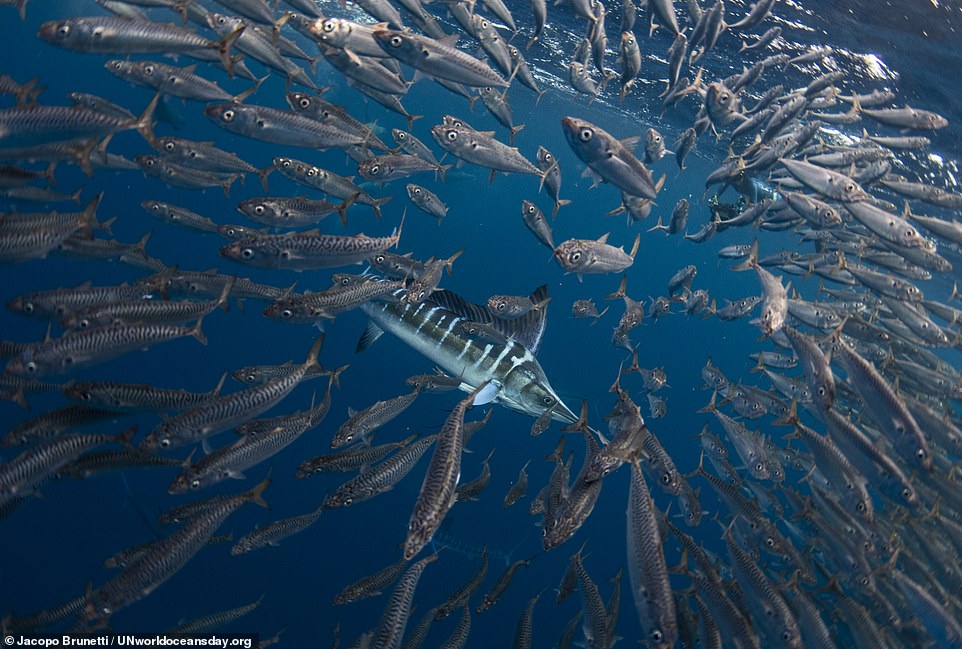 Jacopo Brunetti from Italy is behind this amazing shot of sardines being chased by a striped marlin during their annual migration off the coast of Mexico. The image, called The Fear, came second in The Ocean: Life & Livelihoods category 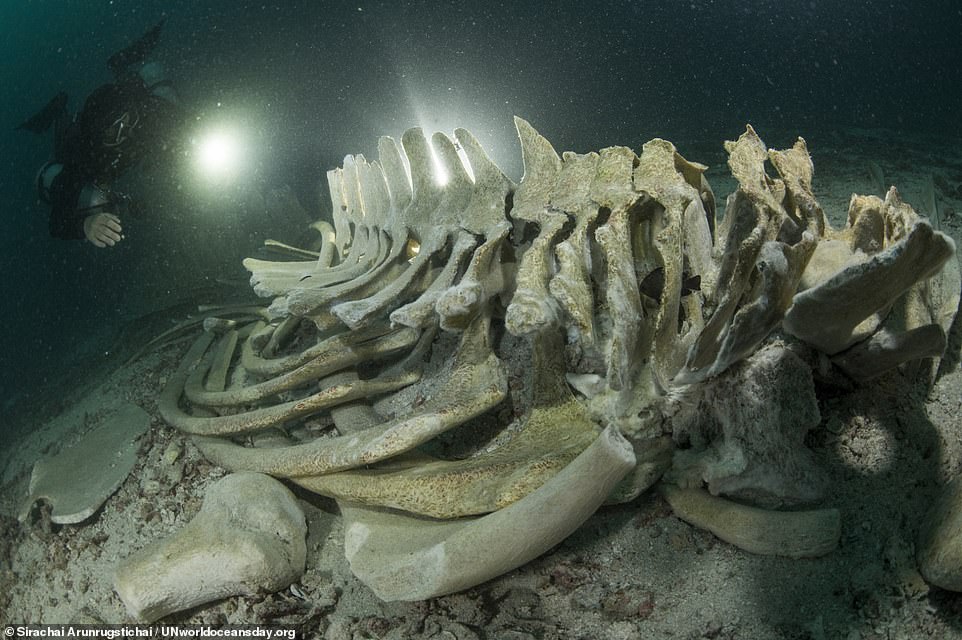 An incredible shot of a diver investigating the skeletal remains of a Bryde’s whale off Koh Haa Island, which sits within Thailand’s Mu Koh Lanta National Park. It was taken by Sirachai Arunrugstichai from Thailand who came third in the Ocean Discoveries category. The whale’s cause of death could not be determined due to the deteriorated condition of the carcass 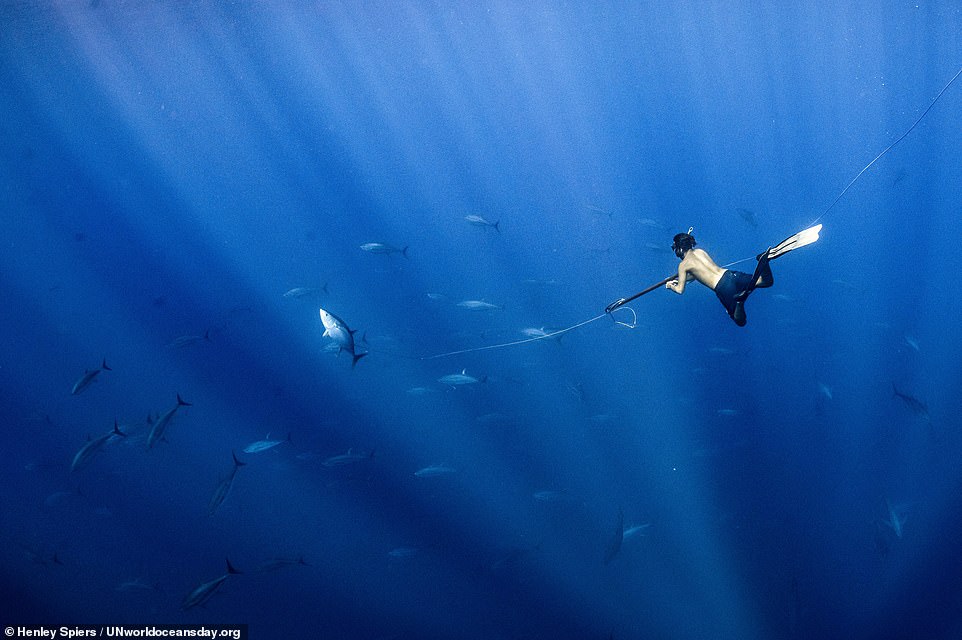 This striking shot of a man spearfishing for yellowfin tuna off the coast of Costa Rica was taken by British photographer Henley Spiers. He said that David, the man pictured, ‘lives in harmony with his local waters’ and he only takes what he needs to survive. Spiers came third in The Ocean: Life & Livelihoods category thanks to this image 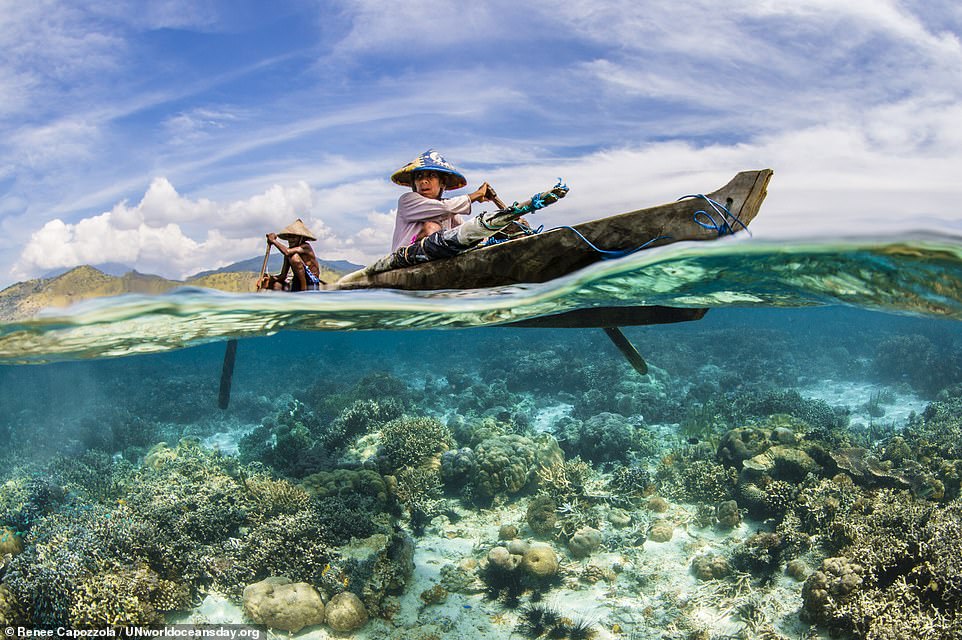 Renee Capozzola from the U.S was crowned winner of The Ocean: Life & Livelihoods category thanks to this stunning photo of two local fishermen paddling in a traditional canoe along a shallow coral reef off Adonara Island in Indonesia. Capozzola said they were practising handline fishing, which is ‘a type of sustainable fishing without poles or nets’ 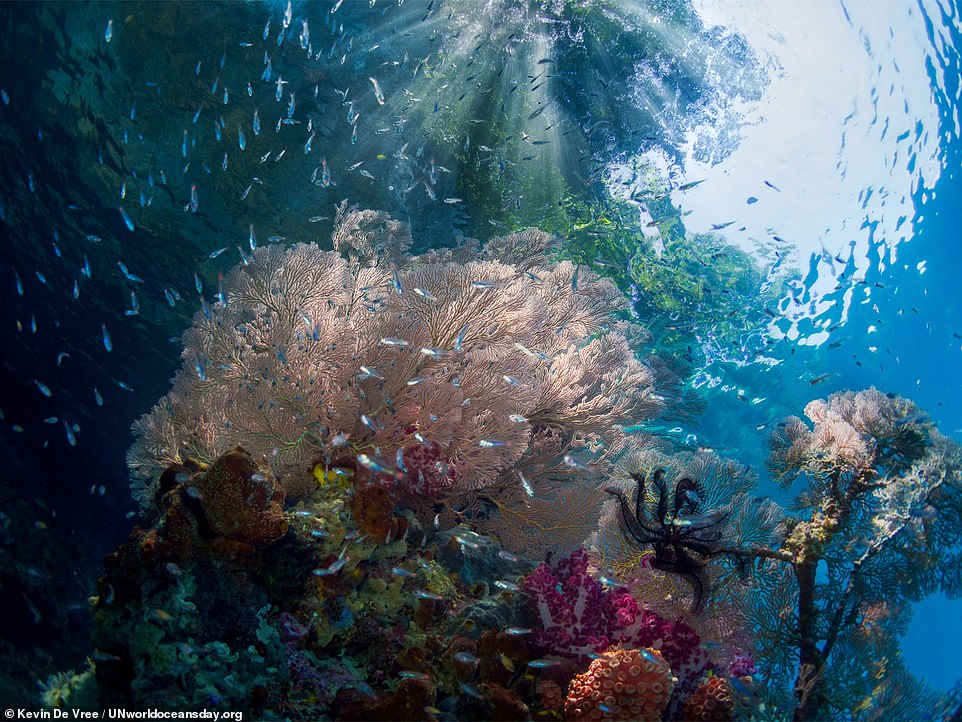 In the Underwater Seascapes category, Kevin De Vree from Belgium came third with this shot, which he took in the Dampier Strait in the Indonesian province of West Papua. He said: ‘This photo highlights the beauty and importance of coral reefs as the underwater forests of our planet’ 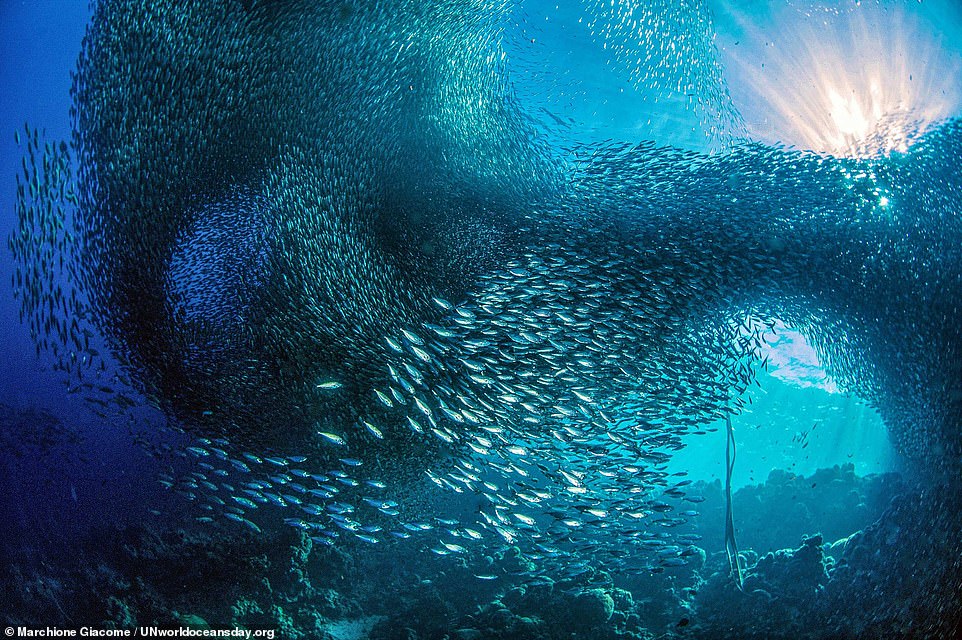 Marchione Giacome from Italy is behind this jaw-dropping shot, which he snapped off the coast of Cebu in the Philippines. It came second in the Underwater Seascapes category. The photographer said: ‘The reefs around Cebu are inhabited by thousands of sardines that form immense shoals, large enough to form masses of fish that obscure the sun, much like clouds moving during a thunderstorm. The scene is very impressive; the observer is left speechless in the face of this amazing spectacle put on by mother nature’ 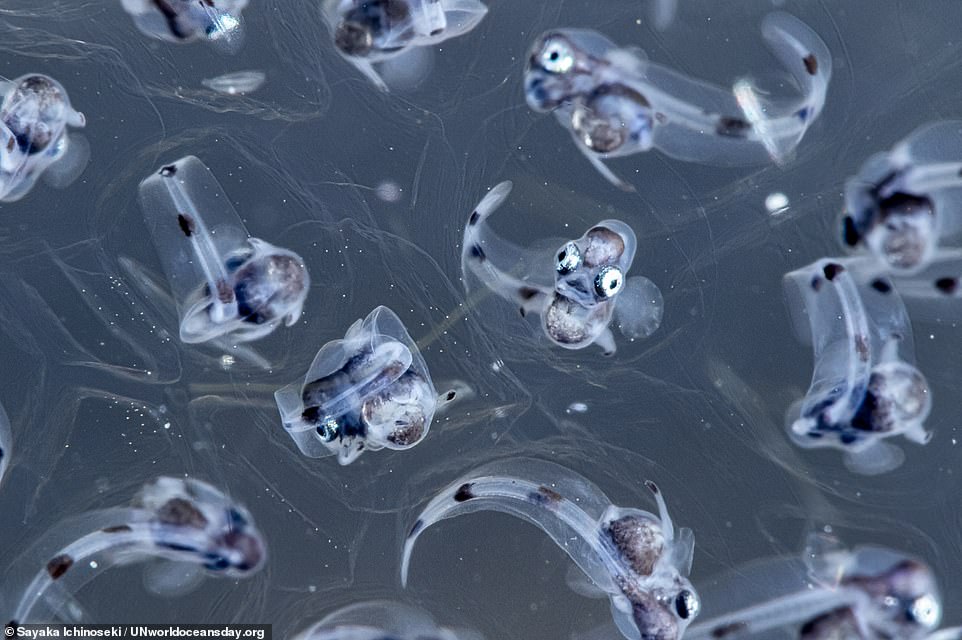 Sayaka Ichinoseki from Japan was the winner of the Faces Of The Sea category, with this striking image taken in Hokkaido, Japan. She said: ‘They were very tiny and immature so I can’t say for sure but they are most likely to be yellow goosefish. Just 2mm in size, these babies were in a two square metre egg veil, just before hatching out. They were rotating as the entire egg veil was shaking with the tide current’ 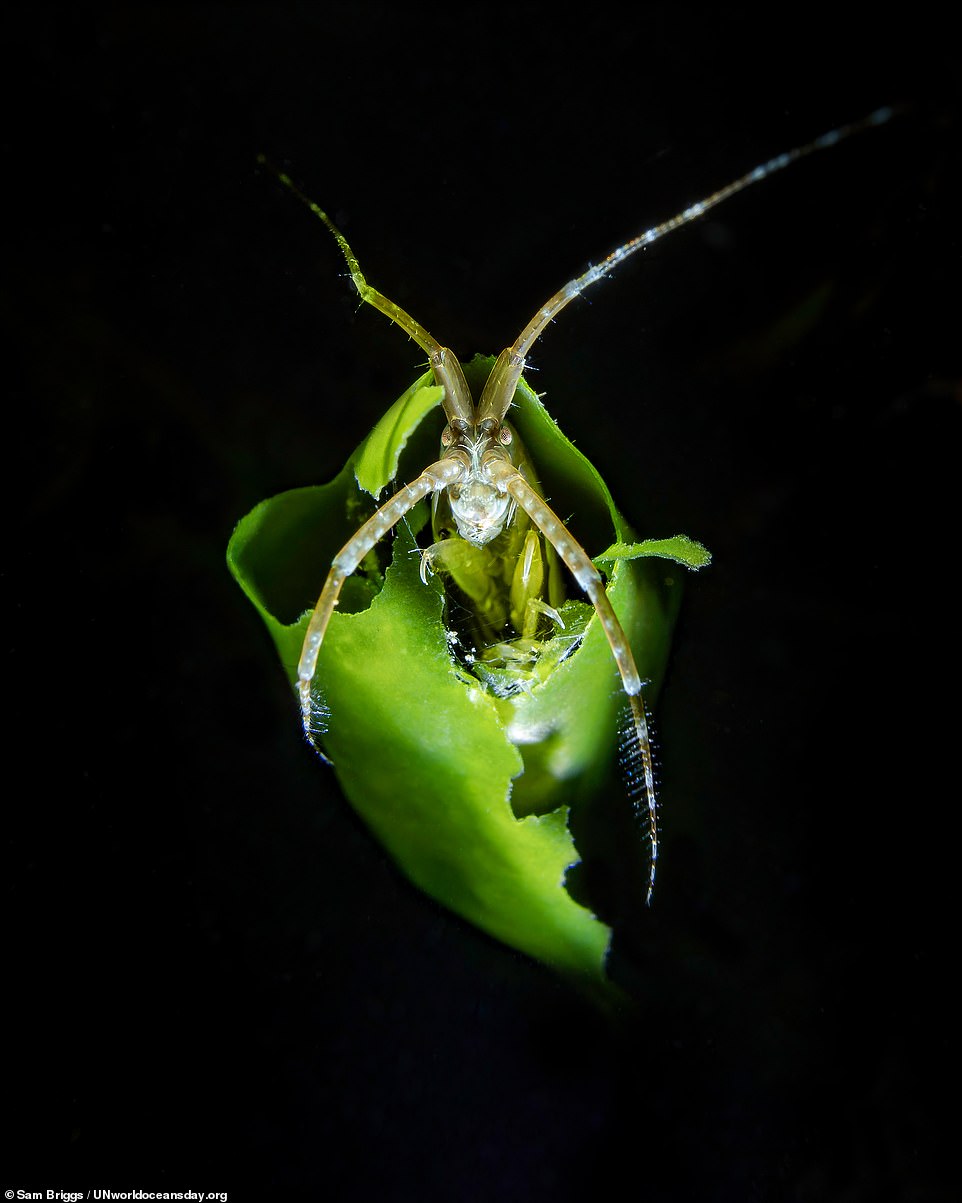 This stunning shot taken by US photographer Sam Briggs was second in the Faces of the Sea category. It was snapped in Bodega Bay, California. Briggs explained: ‘A curious little amphipod stares out from its tube-dwelling constructed of folded sea lettuce and amphipod silk. Over the years, I have found some of the biggest personalities come in the smallest of packages. Don’t get me wrong, I love the charismatic megafauna just as much as the next person but there is just something about the little creatures of the sea that really captivate me’