Until the pandemic the term “remote worker” conjured up an image of a young hipster lugging a Mac around a co-living space somewhere in Bali or Berlin. But when coronavirus forced half of the UK to work from home back in April, a whole new cohort of people, who had spent their entire careers in an office, realised that working from different locations was a real possibility. Boris Johnson’s announcement on 22 September of a new set of Covid-restrictions that could last up to six months – including advice to work from home wherever possible, in a reversal of previous messaging – could well inspire many more people to adopt a nomadic working life.

Destinations hit by the global halt in travel have already started to target nomadic workers to make up for the loss of tourist income. Barbados was one of the first to launch a “digital nomad” visa, in July. Since then, a wave of other countries have announced similar programmes, including Estonia, Georgia and Croatia. Most recently, Anguilla launched a visa scheme inviting visitors to live and work on the island for 12 months, “swapping grey skies and jumpers for tropical blues and daily temperatures reaching for the 30s”.

The downside of these schemes is that they require proof of high earnings – at least €3,504 a month for Estonia, for example; US$50,000 a year for Barbados. Some also charge an application fee, and if you want to rent a villa in Anguilla you’ll need a very hefty bank balance. While the new working visas have garnered a lot of publicity, most remote workers are interested in shorter-term stints abroad, switching between periods at home and abroad – although anyone planning to decamp needs to check the constantly changing travel restrictions.

Ed Francis, 37, from London, who runs London-based hospitality consultancy The Rebel Agency, is among a new breed of remote workers, or “half-tourists”. After giving up his office in Soho during lockdown, he spent July and August living and working in Palma, Mallorca, with his girlfriend, and is now considering a permanent move. “It took me a while to settle into doing things differently,” he said. “I had to free myself from the nine-to-five mindset – taking a Wednesday morning off to go to the local market, for example, then working in the evening to catch up. Or taking a day off during the week to go to the beach (when they were quieter), then working at the weekend. But now I really believe this is the future of work.”

Francis is so sold on the idea of being able to work from different locations he is now looking at developing work/live retreats as a new business venture, starting in Sicily. “I’m not advocating [people] become a global nomad; what we will offer is the chance to come and work and stay in a different environment for short stints, a week or two at a time.” 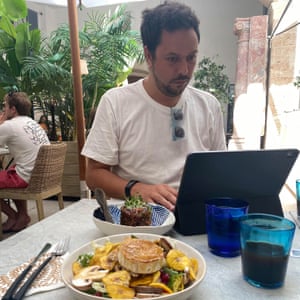 Carolyn Brown, 58, is another first-time remote worker now considering make it longer term. After closing her office in London during lockdown, she swapped her south-west London flat for an apartment in Santorini, where she starts her day with a swim and spends nights with friends in tavernas. “I went out for a week’s holiday but decided to extend it. It’s the first time I can do everything online, so why not? With the time difference I usually start at around 6am but I don’t mind getting up early when I get to watch the sun rise over a hilltop monastery.”

Francis was lucky to stay in a friend’s apartment in Palma, Brown found her apartment after trawling the internet. But a growing number of companies are catering specifically to mid- to long-term renters – and they are seeing a surge in demand for their properties. NomadX, which has a collection of properties in Portugal, launched in July 2020, after trialling a Beta version in 2019. It has seen booking requests almost double on pre-pandemic levels. “In the past, our target audience wasn’t as big, because digital nomads were still in the early adopter stage. Now, we’re starting to see things grow significantly as the number of remote workers increases. Especially as some of the top companies, like Facebook, Twitter, Amazon and Apple are going fully remote,” said NomadX founder Dave Williams.

I went out to Santorini for a week’s holiday but decided to extend it. It’s the first time I can do everything online, so why not?

Flatio, a mid-term letting business in eastern Europe, has seen a 57% rise in UK visitors to its website, based on comparisons between the three months before the pandemic hit (December to February) and when lockdown started to ease (June to August).

Airbnb has also been quick to react to the growing trend, although, mindful of rapidly changing travel restrictions, it is promoting a change of scene closer to home, within users’ own country. 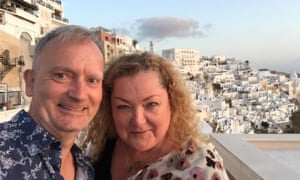 Perhaps the most interesting development is that traditional travel companies which, pre-pandemic, catered solely to tourists are now courting the expanding remote worker market. Balance Holidays is about to expand its wellbeing retreats to cater to workers eager for a change of scene, laying on classes early mornings, evenings and weekends, as well as all food (details on the website soon). In Portugal Martinhal Resorts, which has upmarket properties in Lisbon, Cascais and the Algarve, is offering a reduced rate for long-term stays aimed at families who want to relocate during the pandemic. Prices start at €89 for a two-bed house based on a six-month stay (€98 for three-months), about half the usual rate. Generator Hostels has also reduced its rates for those staying for seven days and more.

Even campervan rental firms are getting in on the act. Indie Campers is about to launch a long-term subscription service after seeing a 66% rise in requests from remote workers. The #vanlife lifestyle could be about to expand beyond the Instagram tribe.

Entrepreneur Dave Williams officially launched NomadX in July 2020 to create a place where digital nomads could find low-cost, mid-term accommodation. The Lisbon-based start-up has more than 2,000 properties in 16 locations in Portugal, such as this light, arty two-bed city centre flat in Porto for €750 a month and this private beachfront holiday apartment for €740. Guests are charged 10% of the overall booking cost (Airbnb charges guests on average 14.2%). NomadX plans to expand to other countries, like Spain, Germany and the Czech Republic, next year. 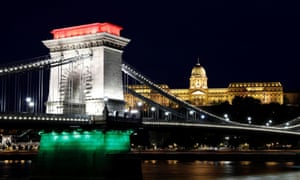 Most of Flatio’s properties are in Prague and Budapest, but it also offers rentals in other central European cities and plans to extend to 100 new cities in the next 10 years. The company is aimed at remote workers and tourists looking to stay in cities for months rather than weeks, and offers everything from furnished studios to six-bedroom apartments, starting at £400 per month. Flatio charges between 4-15% of the final booking fee, based on the length of stay.

Launched in 2014, SpotAHome is an online rental platform with flats in a cities across Europe, from Lisbon and Barcelona to Dublin and London. Examples include this contemporary one-bedroom apartment in Lisbon from £631 a month. The minimum stay is 30 days and fees start from around £55.

New start-up DayZero is a different concept. It connects European craftsmen with travellers who want to try out dream jobs, be it to learn a new skill to start a business or simply experience working abroad. If you wanted to open a pizza van, for example, you’d go to DayZero, who would introduce you to owners of a family-run, classic pizzeria in Sicily. You’d pay a fee then go and learn how to make proper Italian pizza by working and shadowing your hosts for a month in Sicily. The idea is that guests get to experience living overseas while learning a new skill, and local businesses are given a financial boost. All 14 hosts are based in Hungary and Italy, but the company plans to add the UK, Ireland and other countries to its inventory post-pandemic. Experiences cost from £460 for a month (not including flights and accommodation) plus fees, which are 15% of the total cost. The first trips are due to take place in 2021. 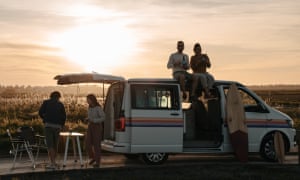 Over the summer, van hire company Indie Campers saw a 225% rise in bookings of over four weeks and a 40% increase in people who stated that they were travelling on a solo trip. As a result, it is planning to launch a new service aimed at nomadic workers this autumn. Customers will be able to take out a monthly or annual subscription to a campervan at lower daily rates than current prices. The company hires vans across Europe and offers portable wifi as an add-on.