Everything’s coming up ROSES: Discovering our favourite flower at its majestic best in Britain’s stately homes and big cities 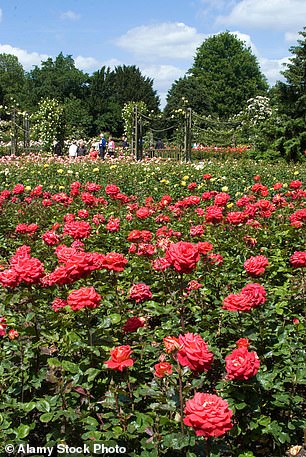 Nothing defines an English garden quite like a rose. Recognised as the nation’s best-loved flower, its classic beauty, heady scent and romance have inspired playwrights, artists – and even top chefs.

Roses are said to bloom earlier in London’s majestic Royal Parks than anywhere else in the UK. Named after the wife of King George V, Queen Mary’s Garden in Regent’s Park features the capital’s largest rose collection. Built in the 1930s, it showcases 12,000 roses with 85 single variety beds and is certainly a sight to behold.

For a romantic stay, take a ten-minute stroll to Marylebone, where the handsome Dorset Square Hotel occupies a Regency-era townhouse.

For more regal roses, follow your nose to RHS Garden Rosemoor’s Queen Mother’s Rose Garden. It is one of two dedicated rose gardens set in 65 enchanting acres in a sheltered nook of the Torridge Valley in North Devon.

Bequeathed to the Royal Horticultural Society in 1988, its formal and informal plantings were masterminded by extraordinary plantswoman Lady Anne Berry.

For exclusive access to the gardens out of hours, retreat to one of three elegant apartments at Rosemoor House. Three-night self-catering stays cost from £358 (rhs.org.uk).

Unlike modern species, old-fashioned roses tend to flower just once a year, so their blooming season is an extraordinary annual sight.

To make a weekend of it, check in to The Kings Head, a charming Georgian coaching inn in the village of Hursley. B&B is from £120 a night (kingsheadhursley.co.uk).

David Austin Roses in Shropshire is the award-winning garden of another renowned rosarian, whose gift to the world was the quintessential English rose.

The national collection of 6,000 roses in 700 different varieties have been tamed into visions of beauty across five themed gardens, spanning two acres (entry is free). While the Renaissance Garden is devoted to English roses, the Long Garden is a delight of climbers, ramblers and early-blooming heirloom varieties. 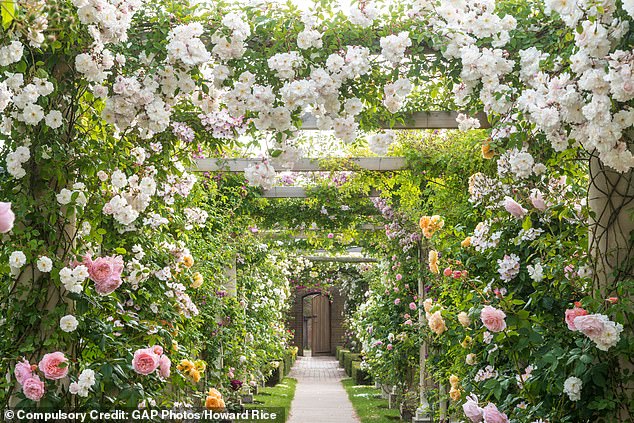 Roses also flourish in the gardens of Hundred House Hotel, a charming country pub with rooms near Telford. B&B there costs from £70 a night (hundredhouse.co.uk).

Visitors can feast their eyes on 135 species of David Austin roses at Wynyard Hall in Co Durham. Transforming the estate’s tired kitchen garden into a rose garden for the 21st Century was a long-held dream of owner Sir John Hall, who used to prune roses in his pit village garden as a young boy. After a relaxing tour, hit the hay in the ten-bedroom Impeccable Pig in nearby Sedgefield. Dinner, bed and breakfast costs from £265 a night (impeccablepig.co.uk).

Another address synonymous with roses is Chartwell, Sir Winston Churchill’s retreat in Westerham, Kent. The green-fingered wartime Prime Minister helped lay the bricks of its cottage-style kitchen garden, which is bisected by a glorious Golden Rose Avenue (gifted to Churchill and Clementine on their golden wedding anniversary).

For a history-steeped stay, The Leicester Arms Hotel, in the pretty village of Penshurst, offers 12 rooms to stay with B&B from £85 a night (theleicesterarms.com).