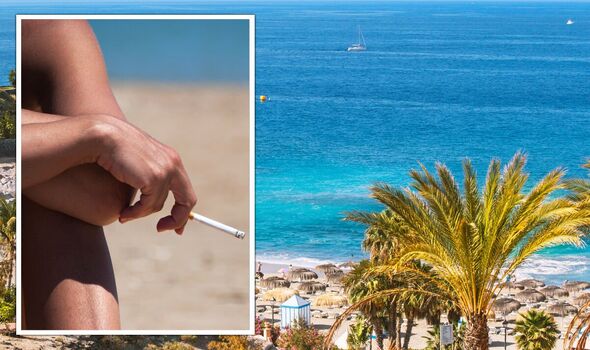 Tenerife in Spain’s Canary Islands is one of the UK’s top tourist destinations. The stunning island will bring in some new laws in January 2023.

The City Council of Santa Cruz is bringing in new rules to reduce litter and waste in public areas.

Smoking will be banned on beaches in the municipality from January 16 to stop people from leaving cigarette butts in the sand.

The new legislation states: “In order to avoid the presence of cigarette butts in the sand and the potential subsequent contamination of the coast, smoking is prohibited on beaches and bathing areas of the municipality, except in areas specially authorised and designated by the Council.”

Tourists and residents could also receive a heavy fine for littering in one of the area’s public spaces.

Anyone who leaves rubbish outside a bin or litters with cigarette butts or chewing gum will face a fine of 2,000 euros (£1,765).

Businesses such as beach restaurants and bars will face fines of 100,000 euros (£88,000) if they create litter or don’t have bins for customers.

The legislation states: “Those who own beach bars, kiosks, restaurants or other hospitality outlets near the beaches or located inside them, must act responsibly and avoid creating scattered rubbish, and must have the necessary containers for it.”

Smoking may still be allowed on some beaches in the region but tourists will need to check for signs.

The Balearic islands have brought in strict new rules on drinking in an attempt to curb booze tourism in the destination.

Tourists in popular party destinations such as Ibiza and Magaluf are now subject to a six-drink maximum at all-inclusive hotels.

Booze cruises are also banned in the resorts while bars have been stopped from offering all-you-can-drink deals.

Malaga has announced it will fine tourists caught carrying lewd objects around the town in a crackdown on stag and hen parties.

Tourists could be fined up to £650 if they are caught with inappropriate items such as sex dolls or inflatable penises.

A City Hall source told local media: “Public spaces must be preserved as places where people can meet, coexist and enjoy their leisure time while respecting others.”

The new rules are expected to be enforced in 2023 and could impact British tourists celebrating in the Spanish region.

Smoking is already banned on beaches in some areas of Spain, including in Barcelona.

The ban was brought in in July and anyone caught smoking on one of the city’s beaches could be fined 30 euros (£26).

Barcelona’s city website states: “This ban is based on environmental protection & the right of citizens to enjoy a clean public space, free of smoke & cigarette butts.”

Cigarette butts are a major cause of coastal pollution and can be extremely harmful to marine life.