The BA i360 pod used to offer the loftiest view of Brighton, but now you can climb ABOVE IT to the summit of the tower at 531ft (and as the Mail discovers – leave your nerves at home)

Short of flying over the city by plane, there’s no better view of Brighton. To the east, I can see the chalk cliffs of the Sussex coast fade into the horizon. Below, the carcass of West Pier sits in the milky green sea, and the Royal Pavilion and the Brighton Wheel rise above the network of architecture that stretches all around.

Ascending the BA i360 Viewing Tower is already an exhilarating experience. The pod – which opened in 2016 – glides upward and rests a dramatic 450ft (138m) in the sky, offering 360-degree views of the city, coast and beyond. 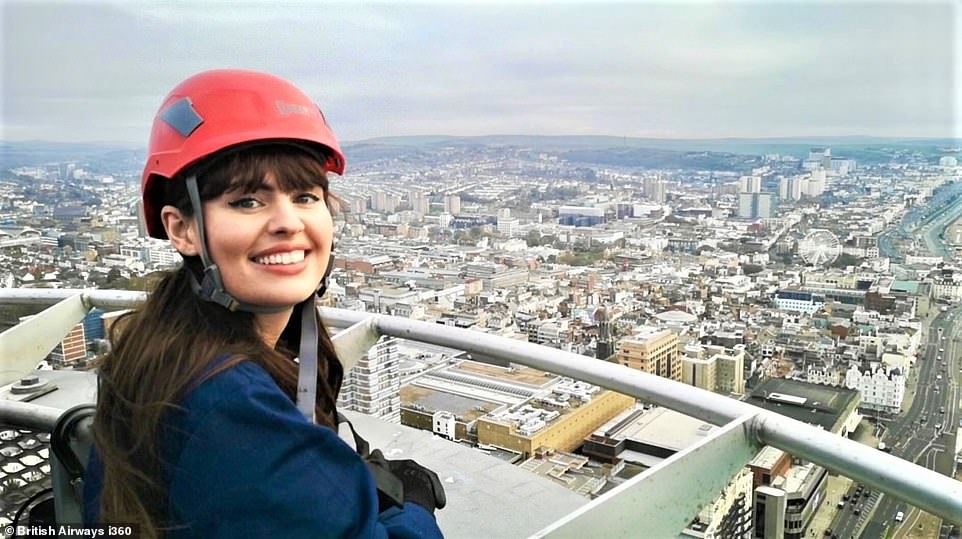 MailOnline Travel’s Ailbhe MacMahon at the apex of the British Airways i360’s Tower Top Climb, which opened to the public earlier this year 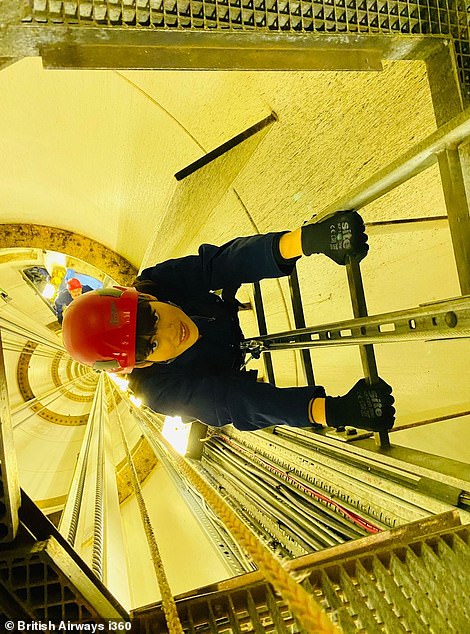 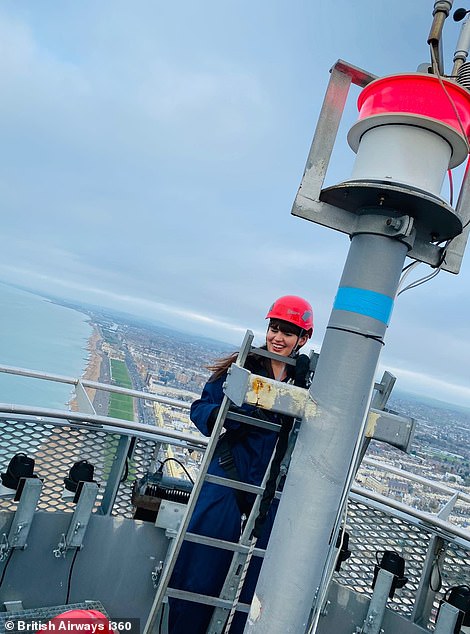 On the left, Ailbhe climbs up the inside of the tower, making her way to the summit, which is at an elevation of 531ft (162m). There’s a red light at the top of the tower (pictured on the right) – officially the highest point in Brighton 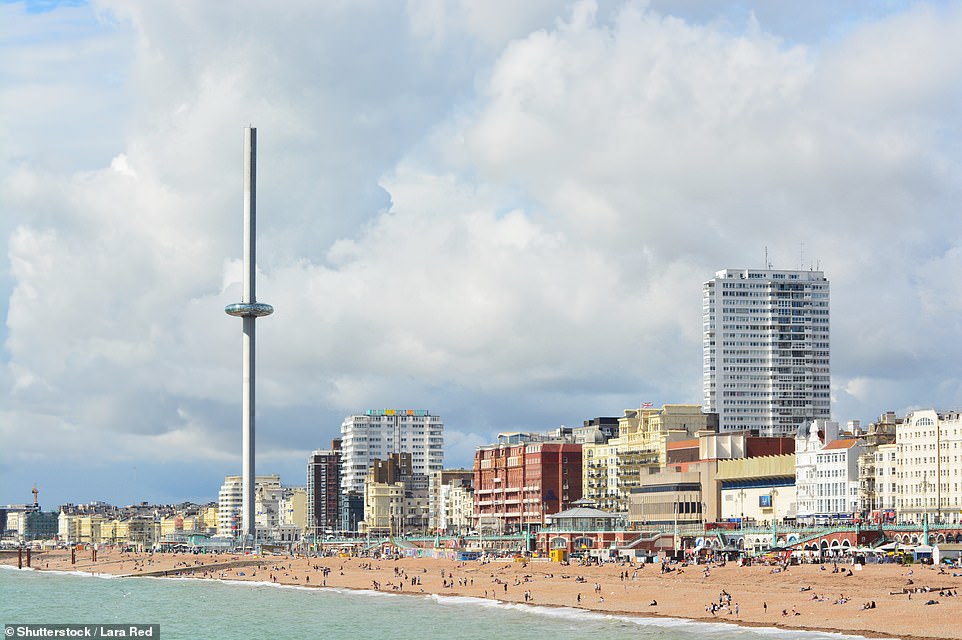 Now, an even more thrilling challenge is open to the public. Visitors can climb up a series of internal ladders to the apex of the tower – a route primarily intended for technicians – and take in a bird’s-eye view of Brighton from 531ft (162m) in the air.

Initially, when I’m offered the chance to do the climb, I’m not particularly fazed by the height.

This nonchalance continues when I arrive at the tower’s base, where two technicians – both named Josh – guide me through a safety demonstration and we make our way upwards in the doughnut-shaped pod.

It’s only when the pod slows to a stop in the middle of the tower, and we enter the interior, that fear well and truly sets in.

I make the mistake of looking down. The ladder inside snakes to the bottom of the tower, with a sheer drop below my feet. The technicians inform me only one person has ever baulked at doing the climb last minute, when they too faced this immense drop. My legs start to quiver. 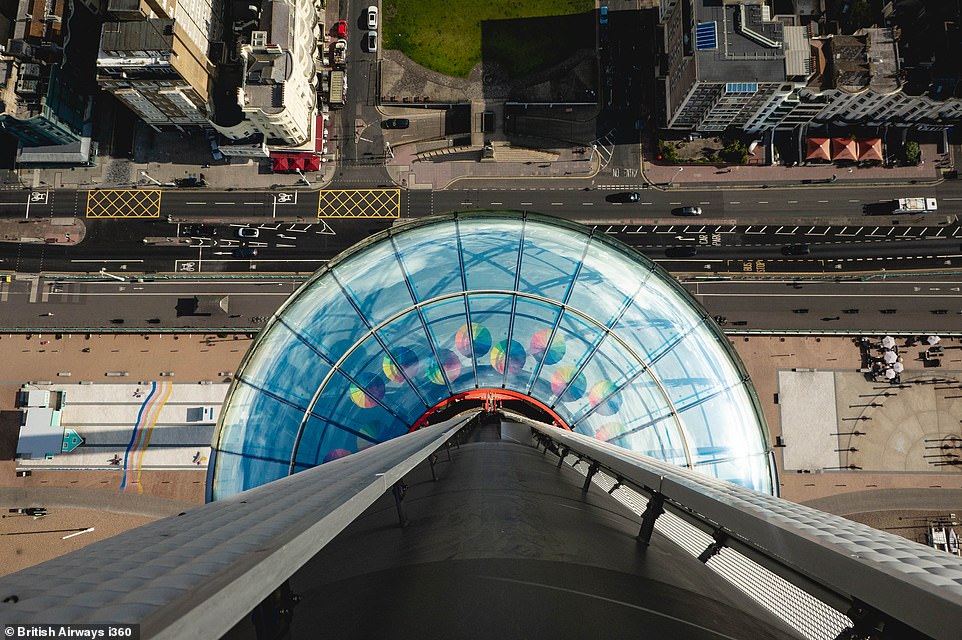 ‘I make the mistake of looking down,’ Ailbhe says of the climb. Pictured is the view of the observation pod from the top 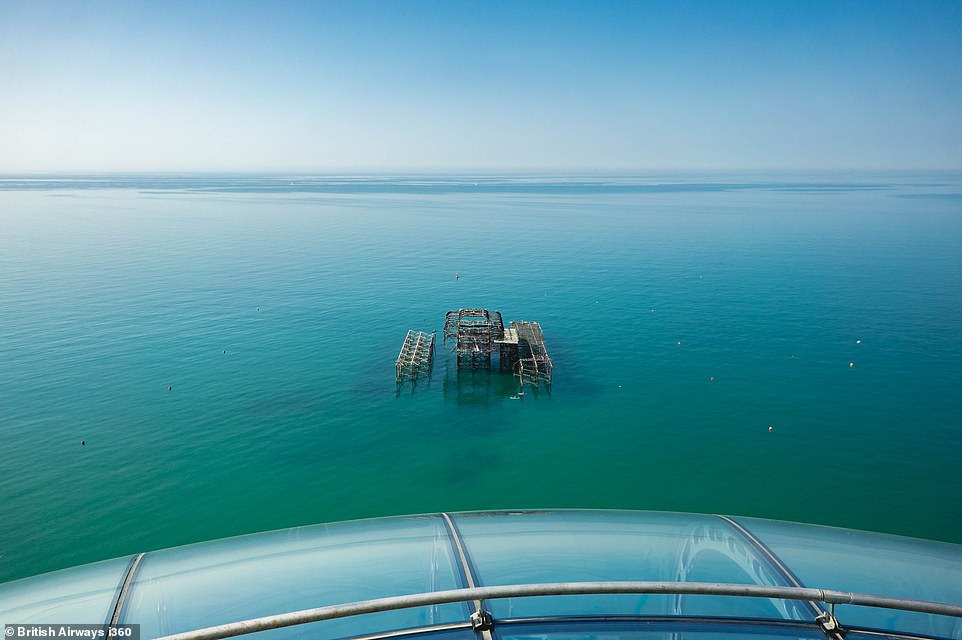 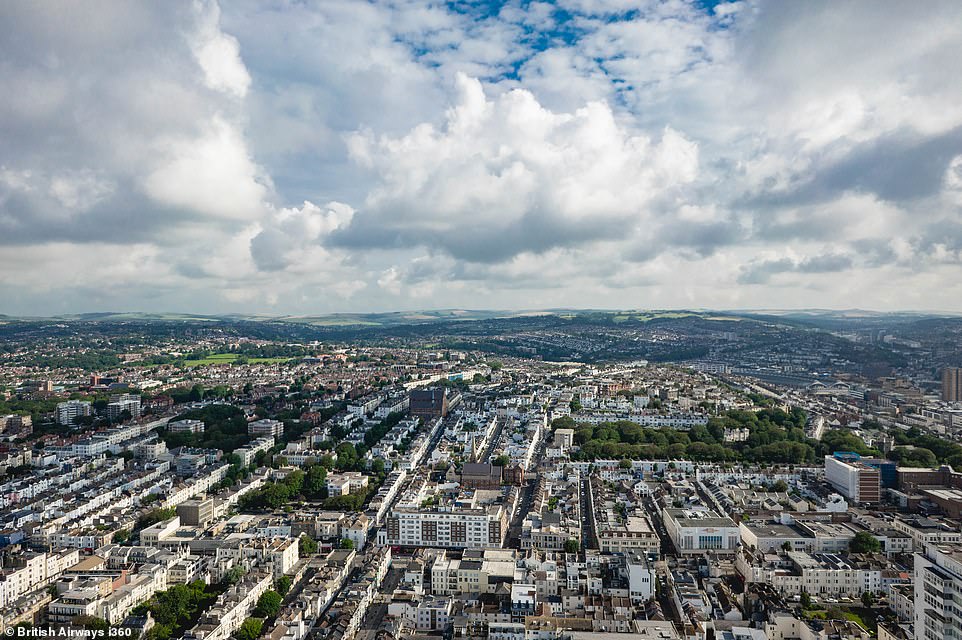 ‘To the east, I can see the chalk cliffs of the Sussex coast fade into the horizon,’ Ailbhe says of this view 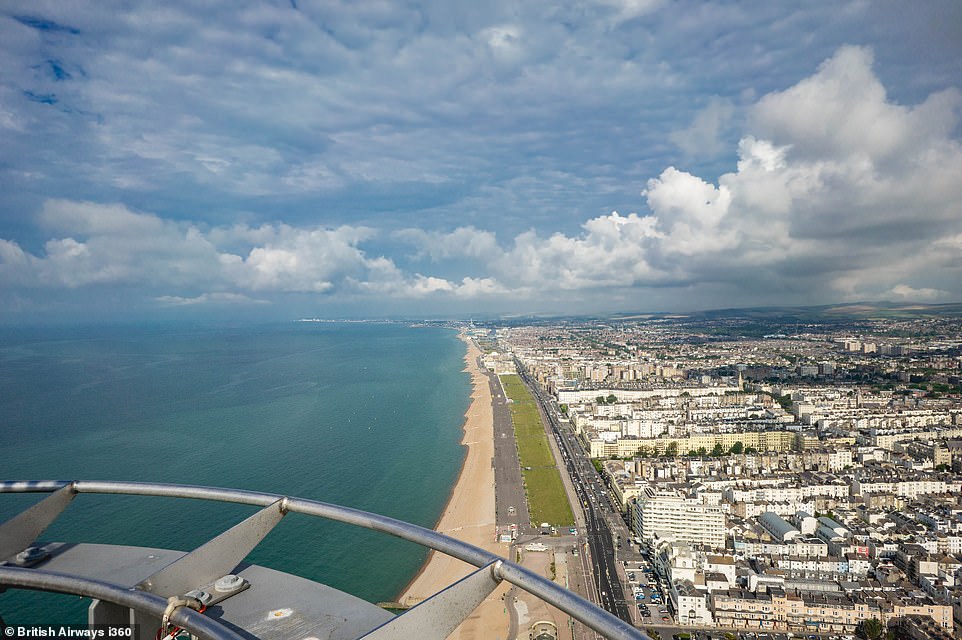 The western view from the tower. Silver tanks near the top of the tower act as a ballast, keeping the tower steady in high winds 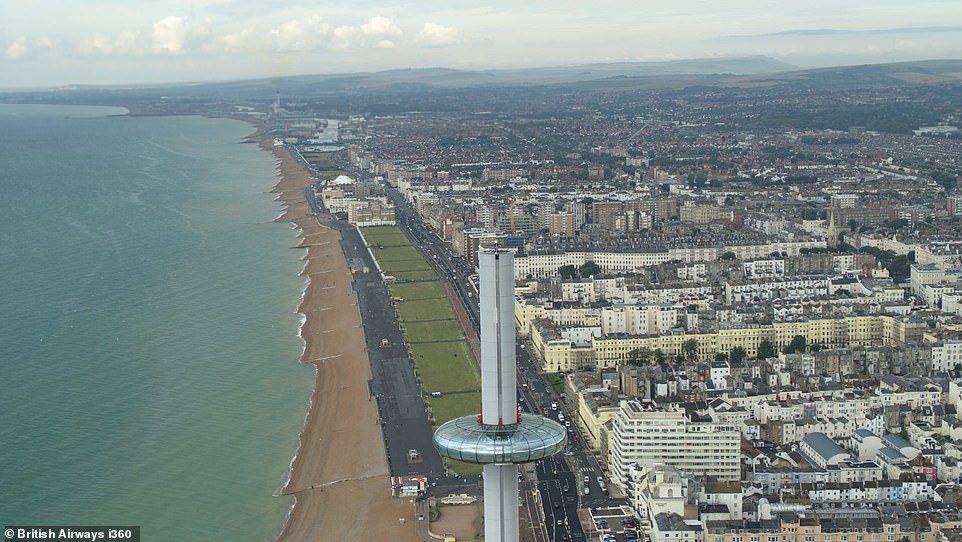 One of the technicians safely hooks me into my harness, and though I know there’s no chance I can fall, it’s still terrifying.

Climbing up the ladder, I feel as if my legs and arms are shaking too much to hold my grip, but I finally make it up to a mezzanine, where the second technician awaits. It’s the first pitstop on the climb, with 105 rungs to scale in total.

Near the top, one of the two Josh’s tells me about the inner workings of the viewing tower. He lets me press a huge red button on the wall that triggers the brakes of the observation pod. The entire tower clanks with the sound. 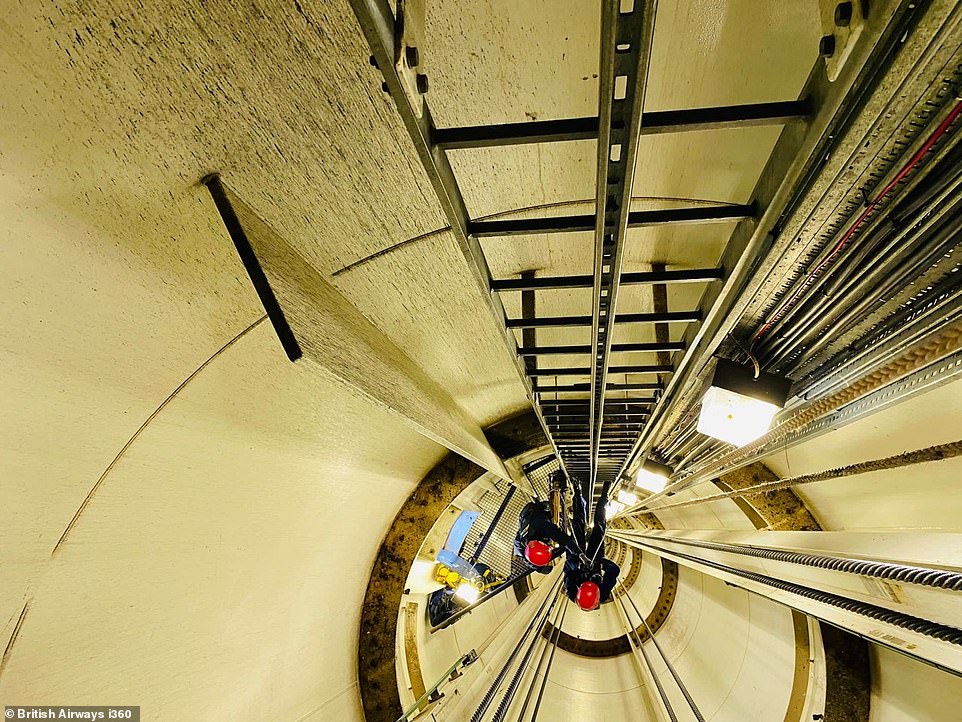 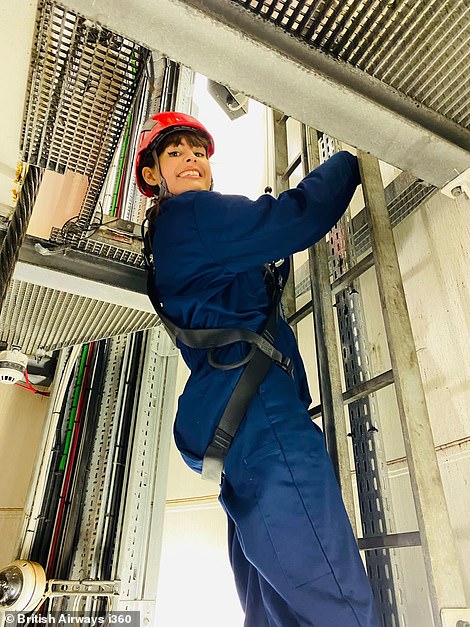 These tanks act as a ballast, keeping the tower steady in high winds. On stormy days, the tower can sway up to 3.3ft (1m) at the top, creating a rocking sensation akin to being on a boat on the ocean.

To carry out repairs and maintenance work, the engineers working there are often required to scale the entire tower from base to apex by the ladders, and they’re meticulous at timing their climbs.

Josh says his best time is 19 minutes, but reveals another one of the technicians can clamber up to the top in just nine minutes flat.

At the summit of the tower, there’s a red light. With the wind whirling around me, I reach up and touch the beacon – which is officially the highest point in Brighton. After drinking in the beautiful views, it’s time to make the descent.

It’s significantly less nerve-wracking on the way back down, but the final stretch triggers another bout of the jitters.

My nerves are instantly soothed when we’re back inside the pod, however, when I’m handed a celebratory glass of Nyetimber sparkling wine.

As the pod floats downwards, Brighton gets bigger before me, no longer in bird’s-eye view but larger than life. I’ve enjoyed every minute of the climb – and feel I have even conquered a fear of heights I didn’t know I had.

The British Airways i360’s Tower Top Climb costs £99, and it’s open to ages 12-plus only. Tickets include the BA i360 pod flight, the tower climb, a selection of photographs taken throughout the experience and a drink from the Nyetimber Sky Bar. The i360 Tower Top Climbs take place from Thursdays to Sundays, 8.00am to 9.30m. For more information visit britishairwaysi360.com.

The Holiday Inn Brighton – Seafront Hotel is directly opposite the British Airways i360 Viewing Tower. Double rooms start at £96. For more information call 0333 320 9324 or visit hibrighton.com.