Home » Travel » Spectacular images of the wilds of Scotland

Spectacular images of the wilds of Scotland in book that argues the benefits of them becoming even WILDER, with the country’s once-colossal forests restored

That Scotland’s landscapes are among the most seductive on the planet is without question.

And the photography in book Scotland: A Rewilding Journey, written by Susan Wright, Peter Cairns and Nick Underdown, is a spectacular celebration of them, capturing lochs, mountains, valleys and islands shaped by ancient volcanoes, glaciers and weather over aeons.

The tome also contains striking imagery of Scotland’s iconic wildlife, from eagles to red squirrels and from wildcats to majestic stags. However, the book has a cause and a vision – for Scotland to become even wilder than it is, for its ecological wounds to be healed and the incredible biodiversity it once boasted restored.

And so the stunning images it contains also serve to highlight the benefits of this ‘rewilding’ and how it can be achieved, to help explain how Scotland’s creatures can play their part – and how ultimately humans will benefit.

The authors say: ‘Scotland is an ecological shadow of its former self. A Rewilding Journey is a rallying call for a wilder Scotland, where forests abundant with life are regenerating, where rivers lined with alder and willow run freely, where damaged peatlands are revitalised and where oceans support the great whales. This landmark conservation book portrays a vision for a wilder Scotland – a place where nature works as it should, where wildlife flourishes and crucially, where people prosper.’

As Steve Micklewright, Chief Executive of Trees for Life, says in his foreword: ‘A restored matrix of forest, moorland, mountain top and bog will provide more employment in the Highlands, partly because people want to see and experience wild nature.’ Scroll down for the really rewilding show… 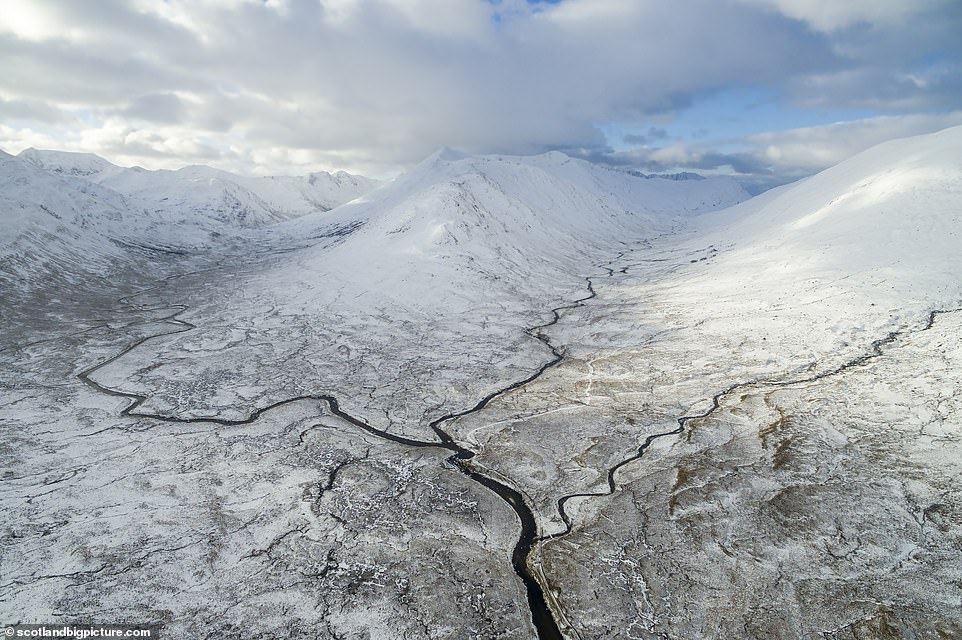 A jaw-dropping photo showing the three tributaries of the River Affric – Allt Gleann Gniomhaidh, Allt Cam-ban and Allt a’ Chomhlain – meeting at the base of Ciste Dhubh, a 979m (3,211ft) mountain between Glen Shiel and Glen Affric, one of several areas in Scotland, says the book, with ‘growing forest fragments that offer hope for the future and fire the imagination for what might happen if nature were given the opportunity to live freely across larger areas’

A stunning shot taken from the 1,010m (3,313ft) summit of Beinn Eighe in the Wester Ross area of the Northwest Highlands. In 1951, the Nature Conservancy Council bought land at Beinn Eighe and created the UK’s first National Nature Reserve, the book reveals 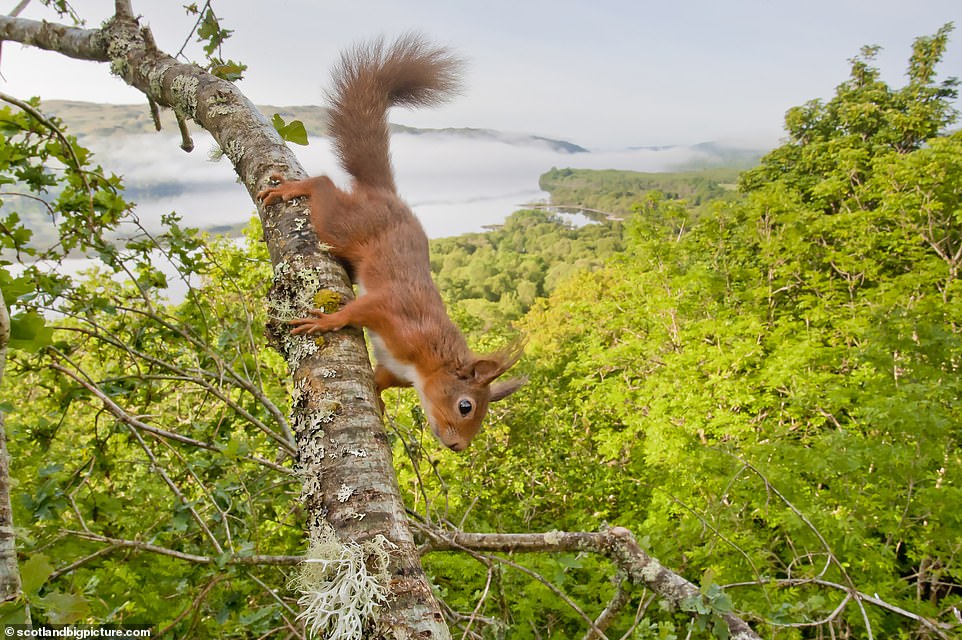 ‘Red squirrels are crucial,’ the book explains ‘because they collect seeds and nuts that they store in the ground and then forget about, inadvertently planting the next generation of trees in the process.’ The tome adds: ‘It is said that a red squirrel [sciurus vulgaris] could once travel from Lockerbie to Lochinver [a distance of 320 miles] without ever touching the ground’ 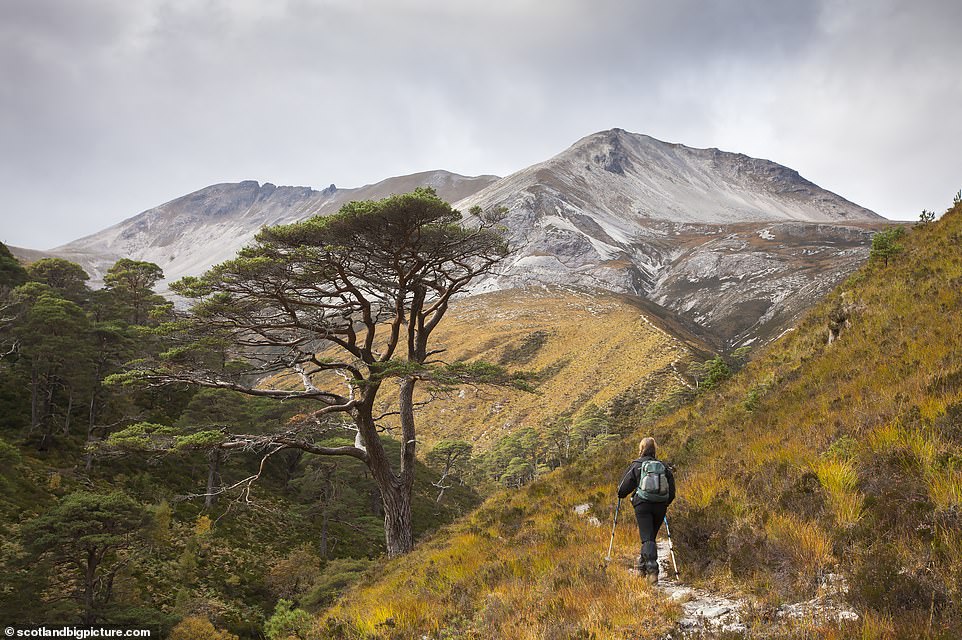 A hiker on a footpath by a wooded glen, with the Beinn Eighe ridge looming up ahead

The River Spey meanders its way into Loch Insh in the Cairngorms National Park. The book says that the Cairngorms is one of the areas in Scotland where ‘pioneering initiatives are underway to restore degraded landscapes and to make the ecological, economic and social case for a wilder Scotland’ 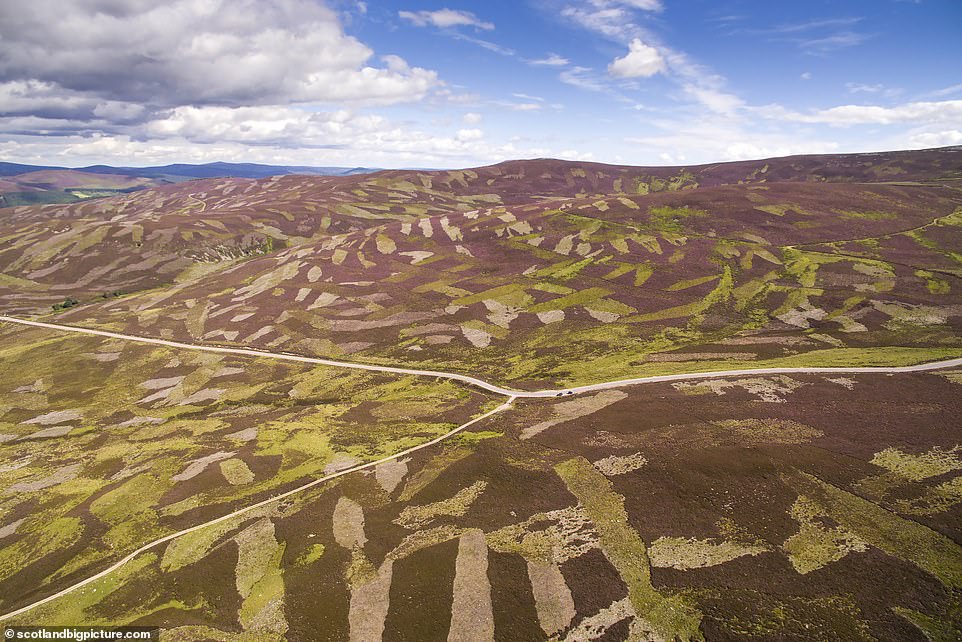 These patchwork moorlands, intensively managed to optimise red grouse numbers for shooting, cover an estimated 2.5million acres of Scotland’s uplands. This image shows an area around the A939, south of Corgarff, and it’s certainly mesmerising. However, the book says: ‘Cultivation of land for grouse and angular monoculture plantations of exotic conifers have further reduced biodiversity and we now stand as one of the most nature-depleted nations on Earth’ 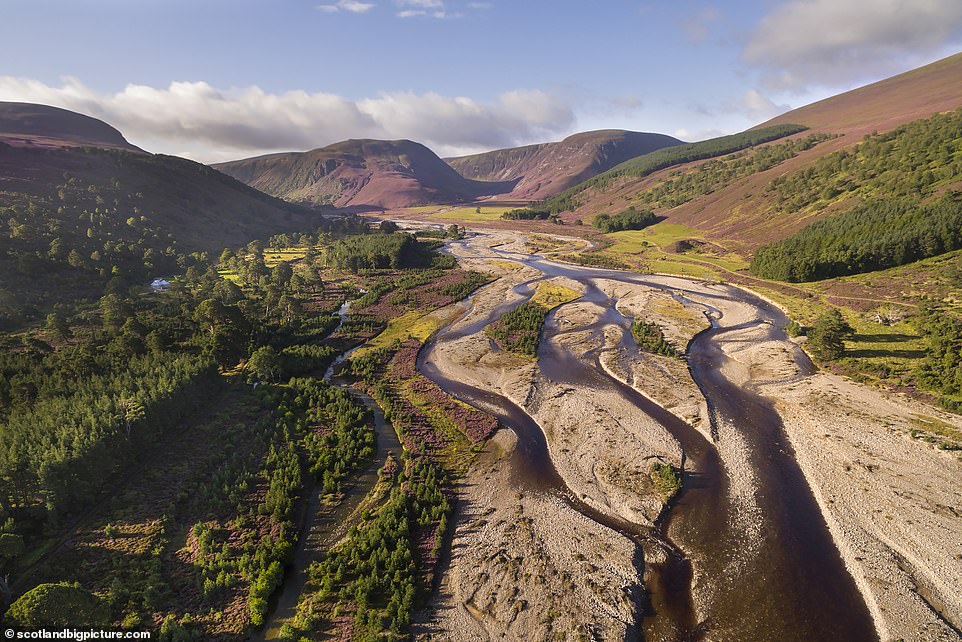 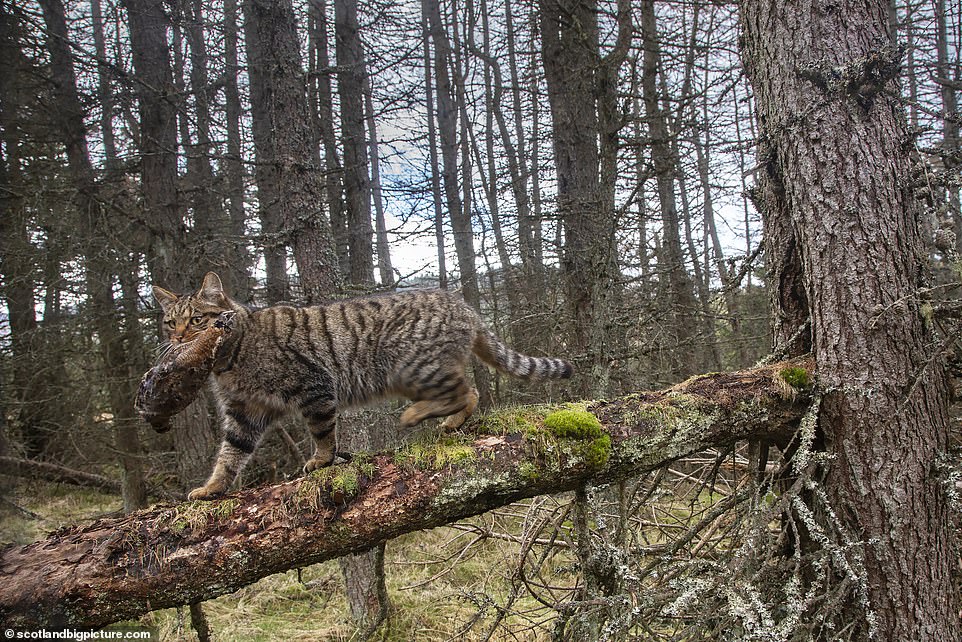 Dinnertime: A Scottish wildcat caught on a camera trap in the Angus Glens. This animal, explains the book, is Scotland’s only surviving native species of cat and is spiralling towards the verge of extinction. Habitat fragmentation is one of several factors behind this. Ecologist Alan Ross is calling for a Wildcat Forest Network with designated ‘wildcat corridors’ 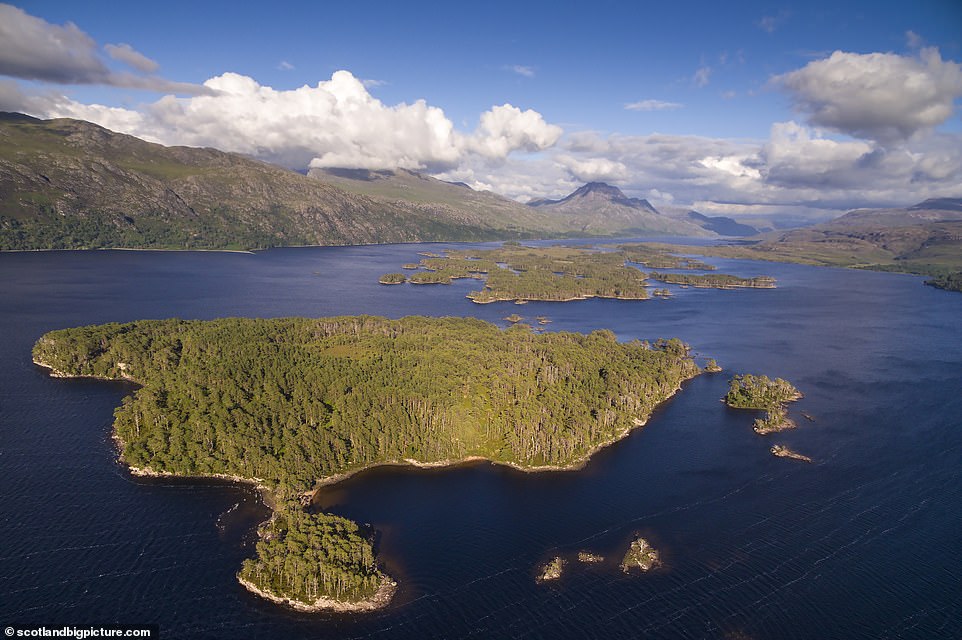 The Loch Maree Islands National Nature Reserve in the west of Scotland, with Slioch mountain in the background. There are over 60 islands within the loch. The pinewoods on Loch Maree’s islands, says the book, are ‘wooded oases that demonstrate a richness of life that’s possible across much of Scotland’. The islands are home to otters, black-throated divers, sea eagles and myriad dragonflies – and complex plant communities 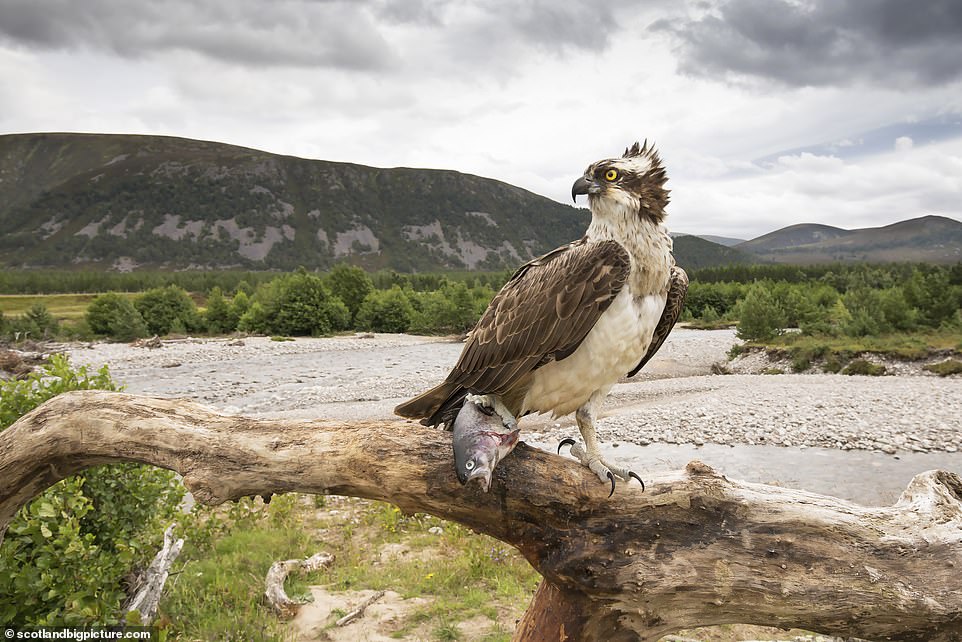 An osprey (pandion haliaetus) perched with a fish in Glenfeshie. ‘The osprey disappeared as a breeding bird for 40 years,’ reveals the book, ‘the last one shot in 1916. Then one day in 1954, a single pair nested again at Boat of Garten in the Cairngorms. Now we have ospreys thriving in multiple locations across Scotland, each a draw for tourists and wildlife watchers’ 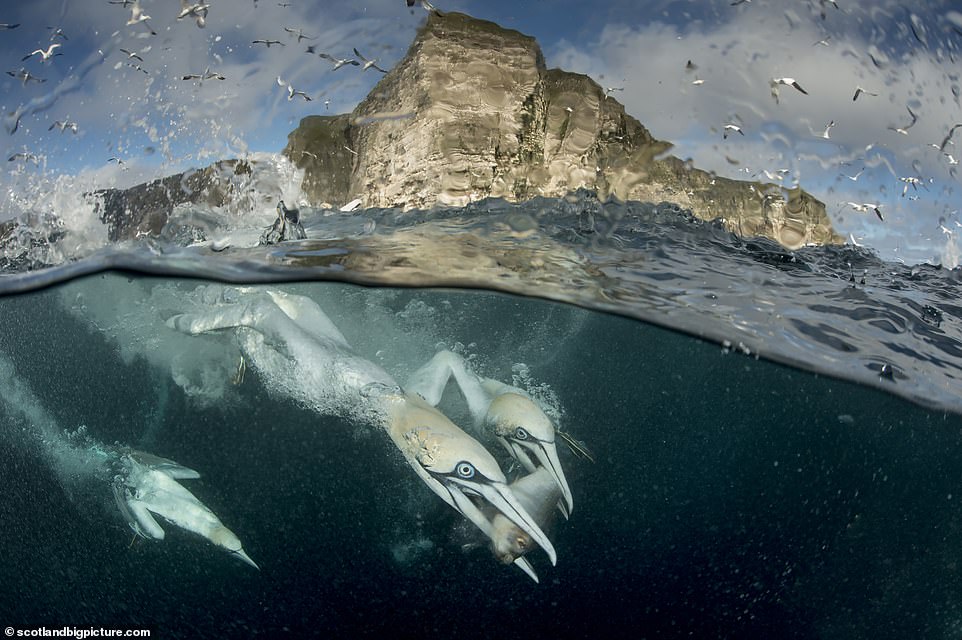 Gannets diving to feed on discarded fish in the Shetland Islands. The book reveals that there have been widespread reports of gannet chicks being fed plastic waste by their parents throughout Scotland, ‘prompting… calls for marine rewilding’

The A9 and the Highland Main Line railway cut through the dramatic Pass of Drumochter in the Cairngorms National Park. The development of the railway in Scotland helped to develop the grouse-shooting industry, the book reveals 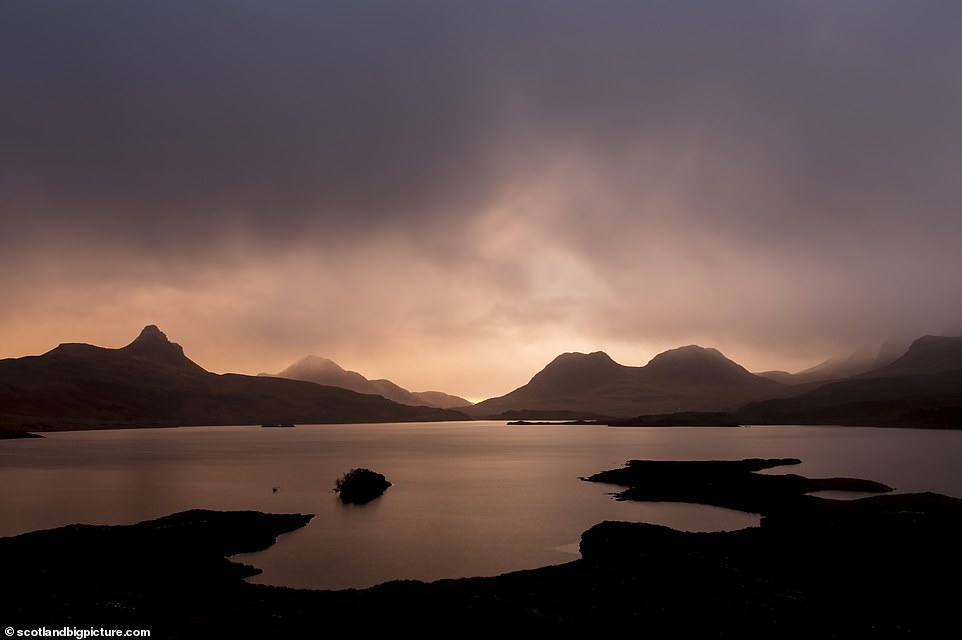 Dawn breaking over Loch Bad a Ghaill. The book describes Scotland’s landscapes as ‘awe-inspiring’, but stresses that the country also contains ‘ecological deserts… land that has lost its natural woodlands and complex vegetation communities’ 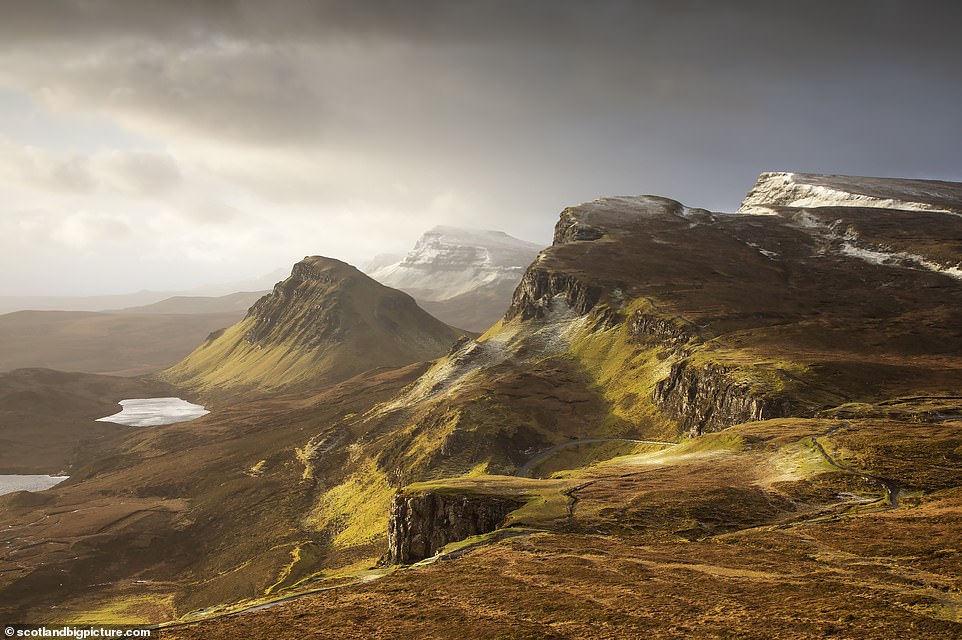 The Isle of Skye – one of Scotland’s most eye-catching locations. This picture shows a dramatic landslip on the island called the Quiraing 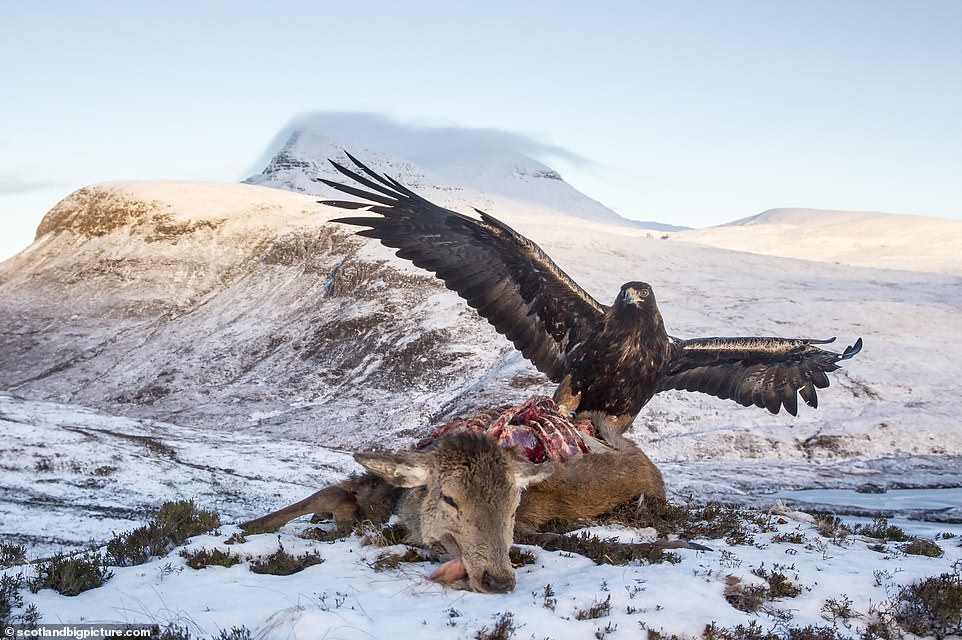 It’s a gruesome scene, but the book explains that the carcass of this red deer hind, on which is perched a golden eagle, ‘will eventually be absorbed back into the soil, providing nutrients for fresh plant growth’ 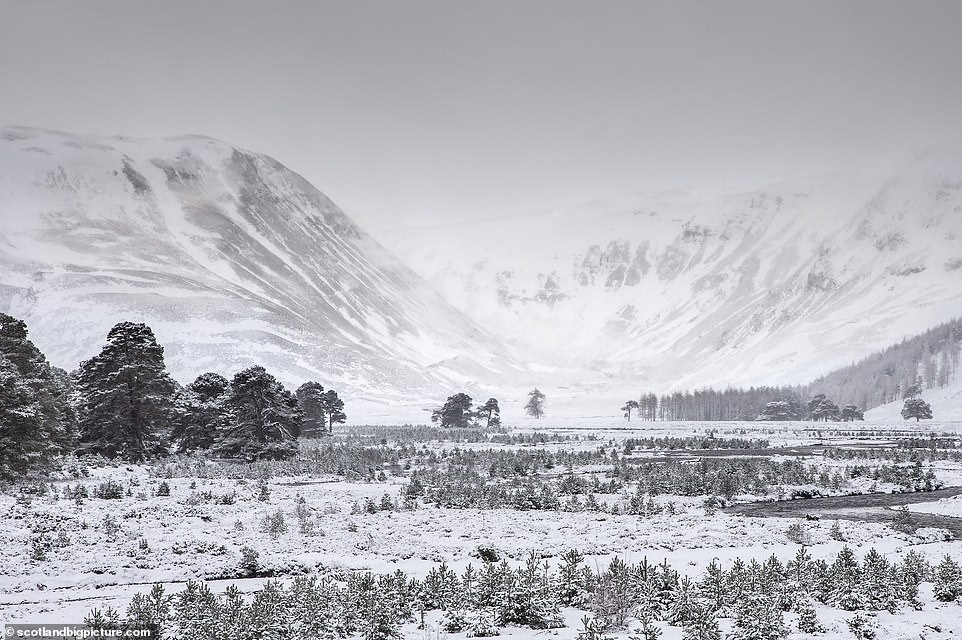 This mesmerising image shows the River Feshie floodplain, where Scots pines are regenerating 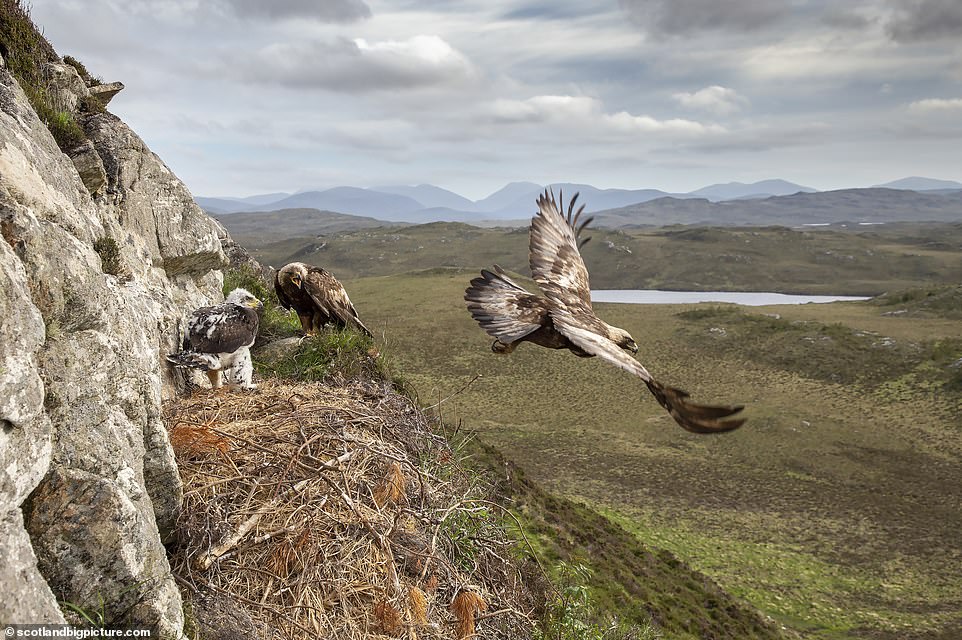 A golden eagle male leaving a nest site – with a female and chick in the background – on the Isle of Lewis, Outer Hebrides 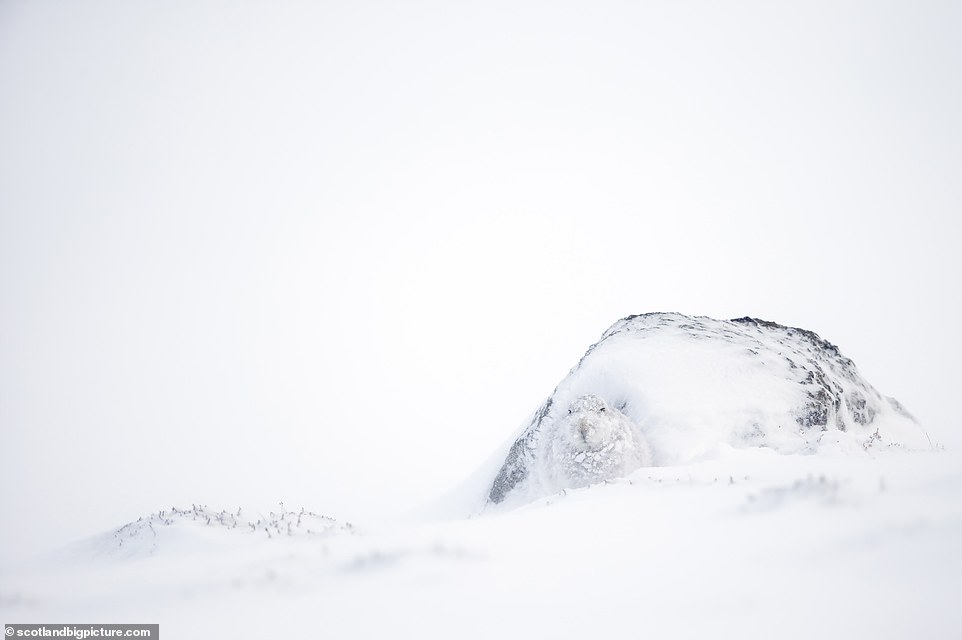 A mountain hare camouflaged in the snow.  The creatures, says the book, ‘are killed in their thousands on [Scottish] shooting estates with little knowledge of how sustainable this may be’ 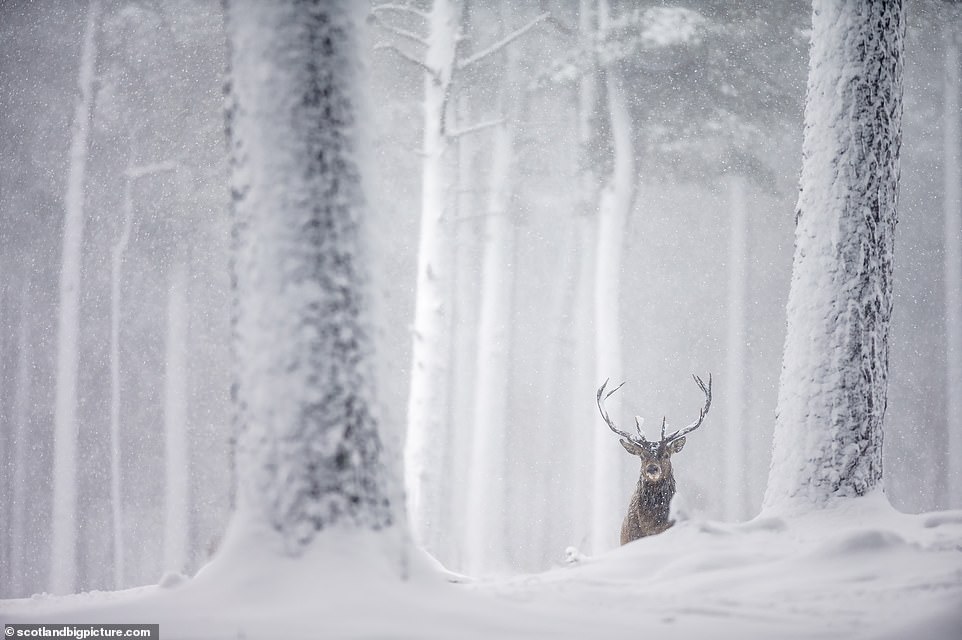 A red deer weathers a blizzard in the Cairngorms National Park. The book says that deer are ‘beautiful animals’ and ‘an essential part of a naturally functioning ecosystem when their numbers accord with the carrying capacity of the land’. It adds: ‘Deer in Scotland should be moving freely in and out of diverse, fence-free woodlands… trampling the vegetation, creating space for new seedlings to grow’ 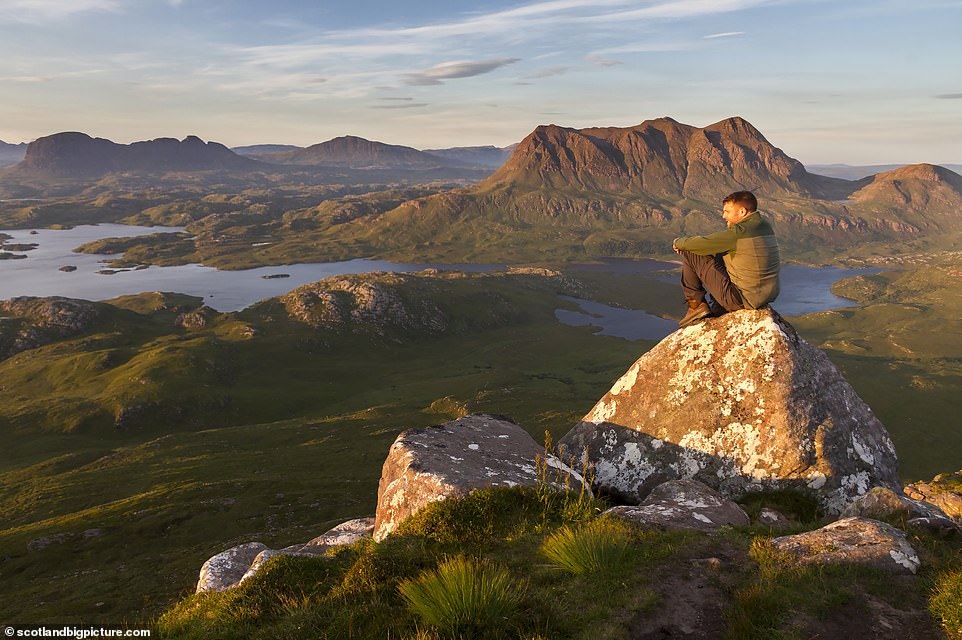 A hiker takes in the incredible view from the 2,007ft (612m) high Stac Pollaidh mountain in the Northwest Highlands 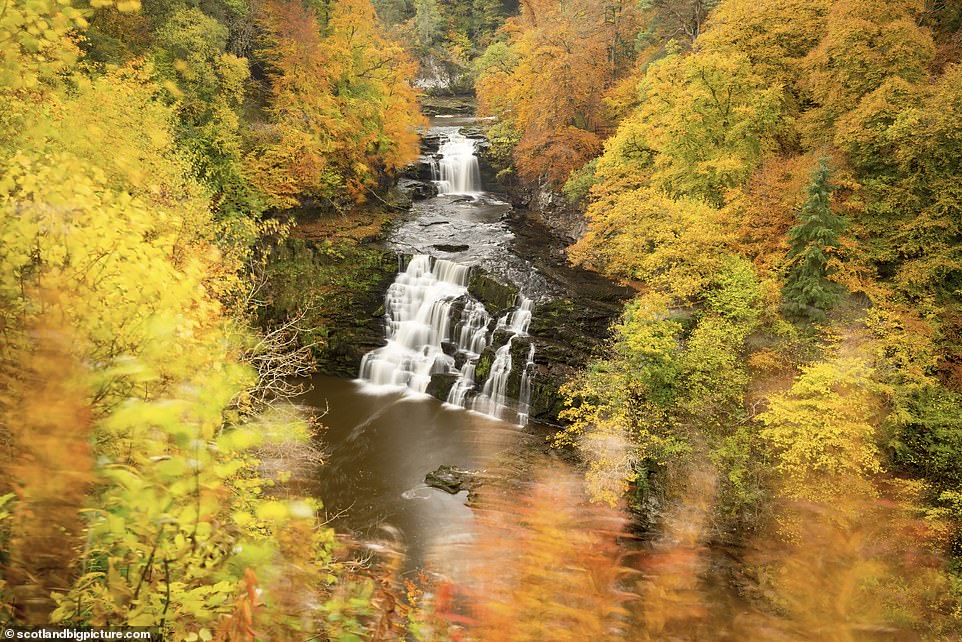 The Falls of Clyde, South Lanarkshire. ‘More frequent flooding events in recent years remind us,’ says the book, ‘that the flow of our rivers reflects the landscapes that surround them. The consequences of rain and snow-melt cascading off bare hills and glens unable to retain water, are obvious’ 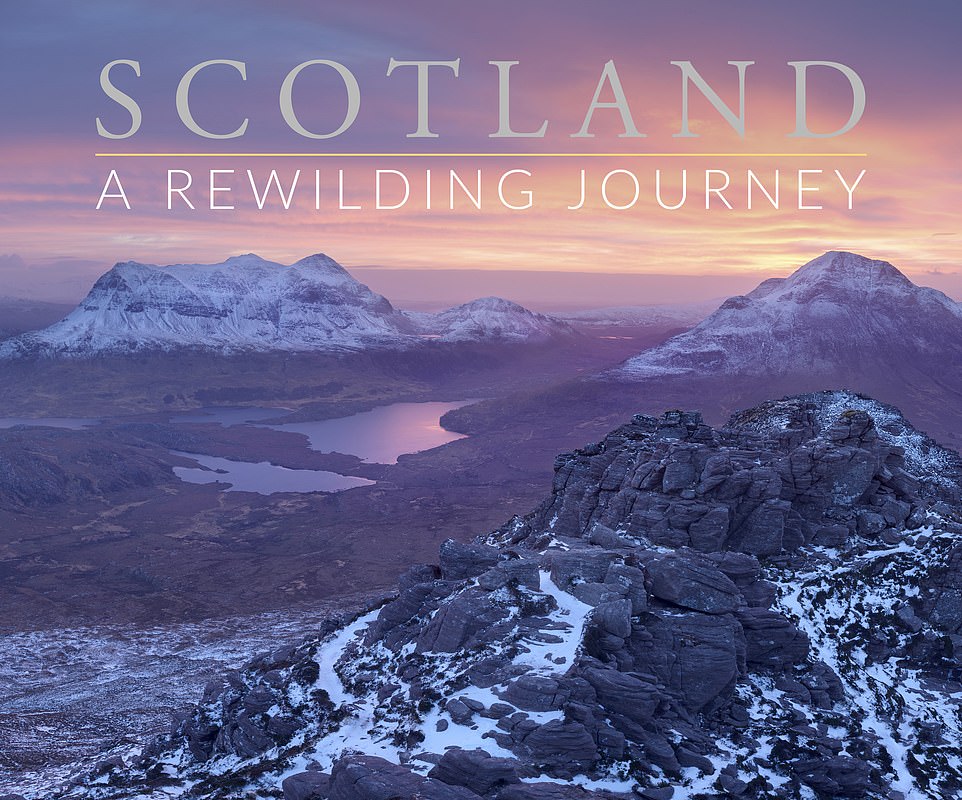 Scotland: A Rewilding Journey (£25) can be ordered via the store at www.scotlandbigpicture.com