This morning Virgin Atlantic’s inaugural A330neo flight departed Heathrow for Tampa. Gilbert Ott, frequent flier and Founder of travel site godsavethepoints.com, was on board. Here’s his verdict on his experience in the ‘Upper Class’ business cabin, complete with photographs he took on the flight.

I’ll be honest, I didn’t expect to love this flying experience on the brand-new Virgin Atlantic A330neo quite as much as I did. I knew it would be good, but I didn’t expect it to be great.

That’s because the main ‘Upper Class’ seat most guests will find themselves in is not technically ‘new’ to the flying market, with a similar iteration being flown by Delta. Can a seat that’s already flying truly be special?

Spoiler alert: the answer is yes. 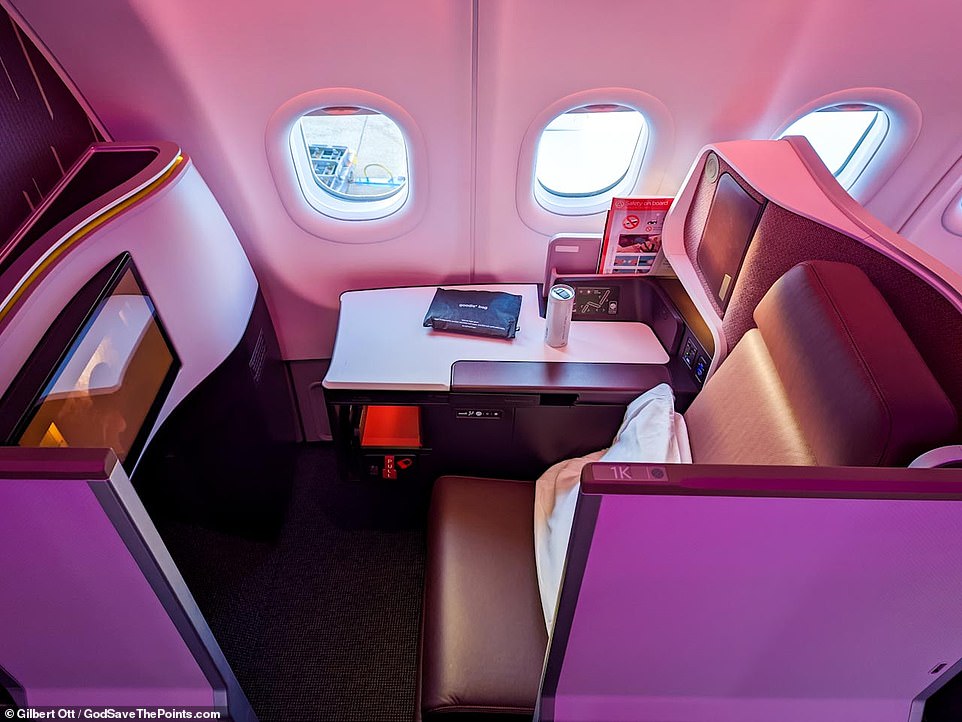 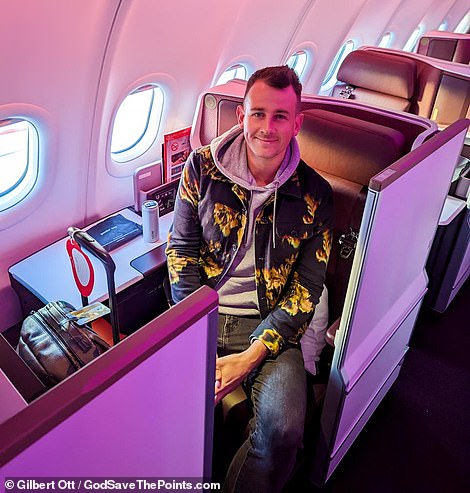 Gilbert pictured on the A330neo flight before take-off

In a way that few know how to do better, Virgin Atlantic found a way to make this A330neo Upper Class experience incredibly exciting and new, even for one of those grumpy frequent flyers like myself, who crosses the pond every couple of weeks.

I’ll now go out of my way for this.

Not only are the Virgin touches on the seat fantastic, there’s a treat, or rather a pair of ‘Retreat Suites’, in the first row that’s simply jaw-dropping.

They feature as a ‘plus’ option for passengers in Virgin’s Upper Class, but are actually a version of a first-class seat flown by global standard bearers. ‘First in business’, if you will.

The two ‘Retreat Suites’ in the first row, suites D and E respectively, offer larger screens, more room and more privacy than most first-class cabins across the Atlantic from other airlines, with touches others won’t catch up with for years.

On board the inaugural Virgin A330neo flight

Obviously, any airplane seat that converts into a bed and comes with Champagne warrants a firm nod of approval, but here extra marks are awarded for the privacy, which is phenomenal – and this plane geek adores the industry-leading Bluetooth and connectivity. 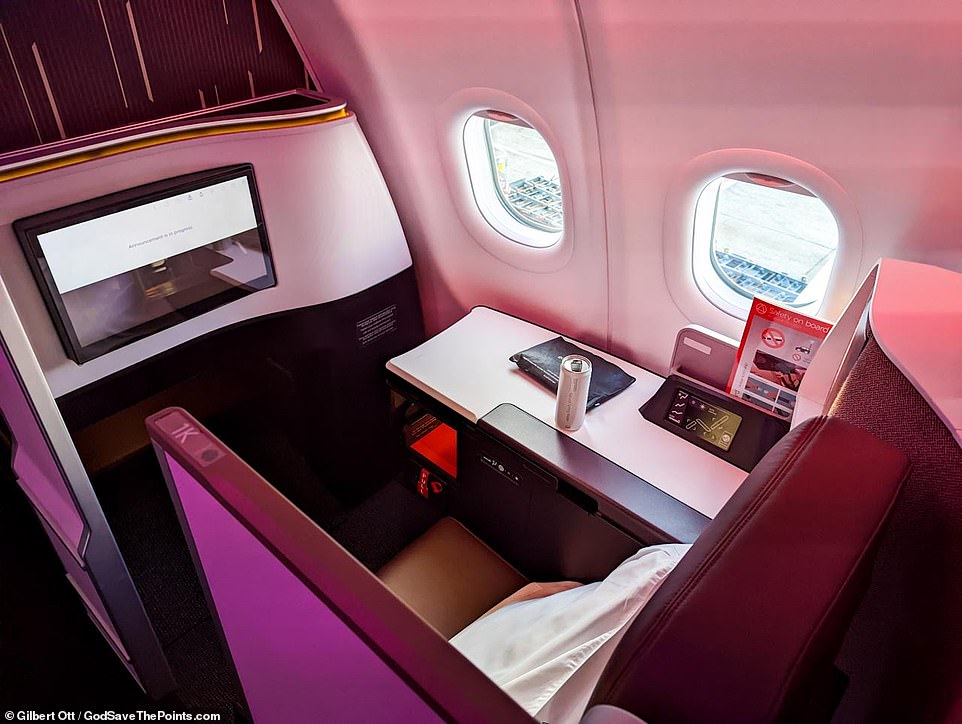 The A330neo seat, above, has 22 inches of width and up to six feet and four inches of length when fully reclined into a flat bed

If you’ve got your own bud headphones you can pair them with the seat – and the Bluetooth was simple to set up.

I was able to use my Google Pixel Buds for the duration of the flight, sampling the in-flight entertainment selection.

Of course, if you don’t bring headphones, Virgin supplies a pair with every seat. 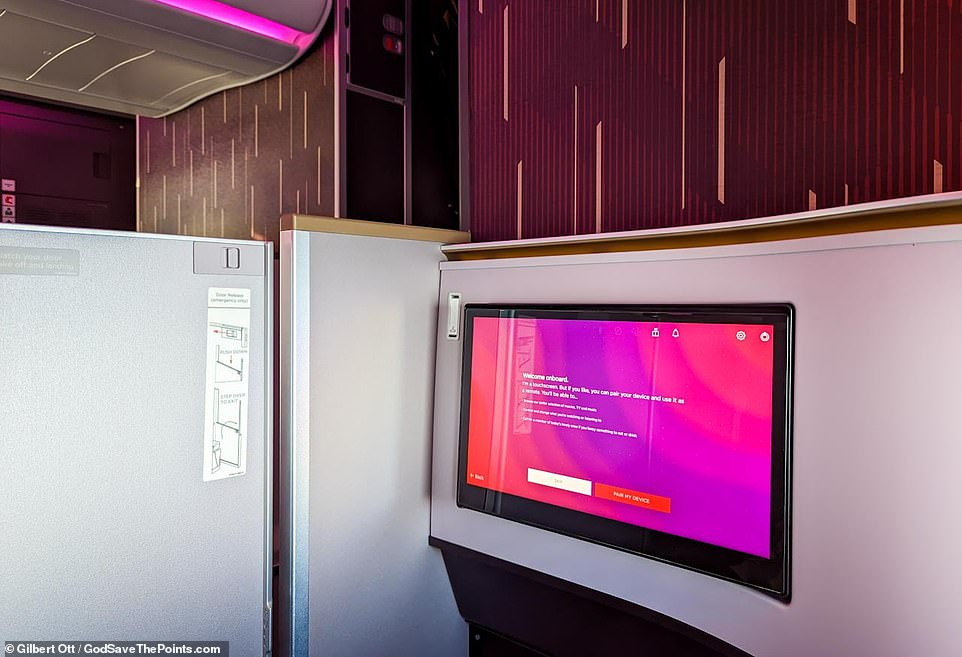 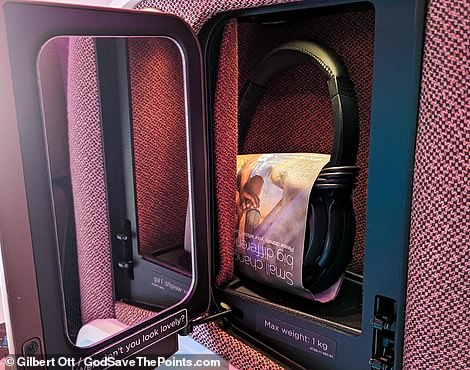 These images show the A330neo business-class headphones (left) and the seat buttons and ports (right), which cater for USB and USB-C cables

Wireless charging for phones kicks in at 10,000 feet in Upper Class, with USB and USB-C ports, plus standard AC power, available.

And for ultimate snob value, how can you not enjoy a ‘do not disturb’ button? Here, you just need to press it if you really don’t want to be woken up or disturbed. It means the cocoon created by the full privacy doors can be enjoyed all the more. 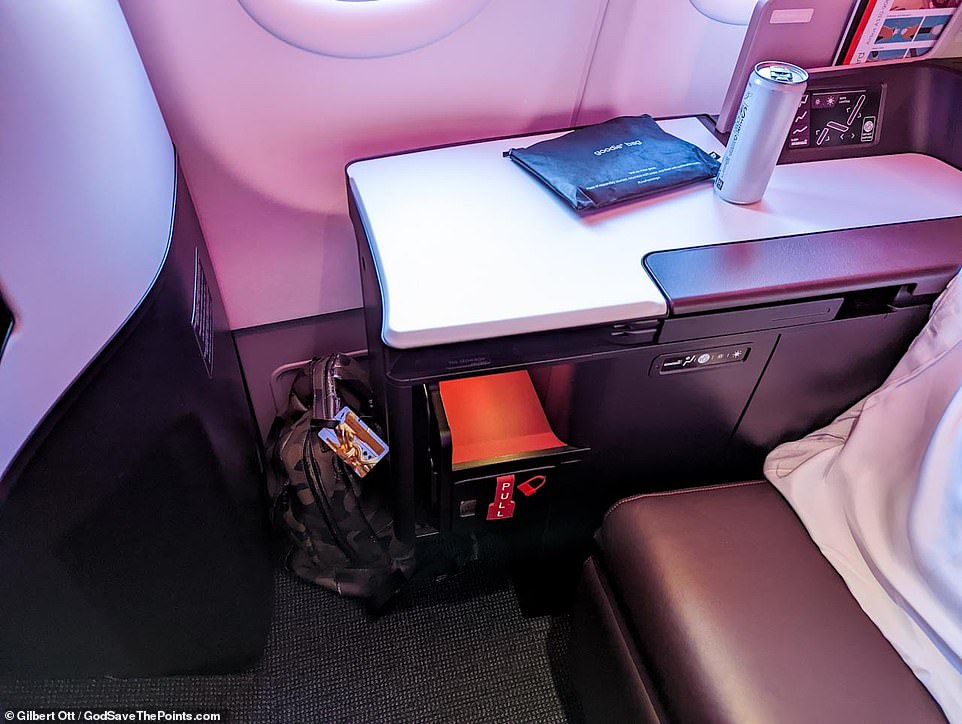 ‘Based on the finishes, nice duvets and sleep comfort, I’d say it’s a top-five business-class bed and seat,’ declares Gilbert 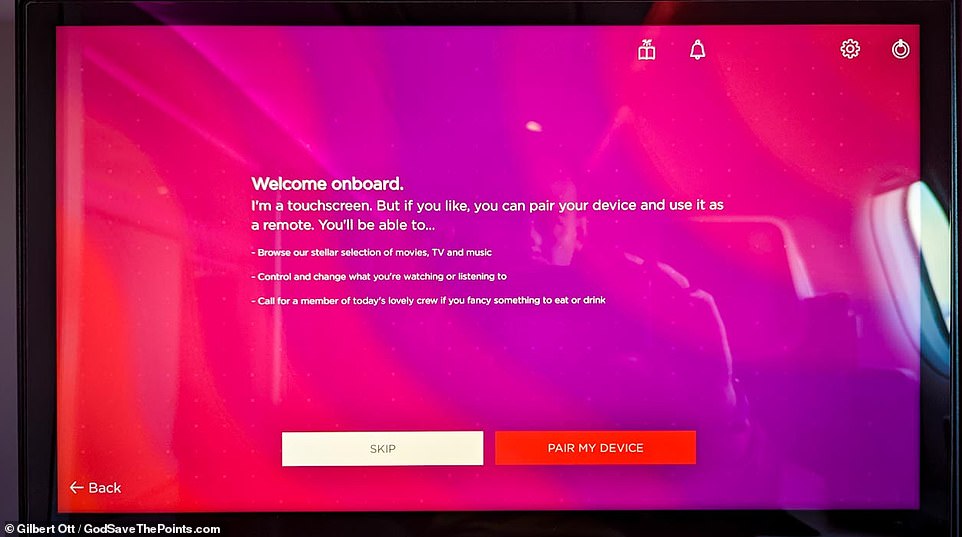 Gilbert describes the connectivity on the A330neo as ‘industry-leading’

The handy ‘do not disturb’ button

With 22 inches of width and up to six feet and four inches of length when fully reclined into a flat bed, this seat is a dream to sleep on.

And with the privacy door closed and ‘Do Not Disturb’ engaged, this is as peaceful as commercial business class travel gets, aided by the A330neo being noticeably quieter in the air (while using 25 per cent less fuel).

Based on the finishes, nice duvets and sleep comfort, I’d say it’s a top-five business-class bed and seat.

And while not asleep, I found the experience to be highly customisable.

In slouch mode, the seat remains remarkably comfortable and the 17.3-inch entertainment screen is easily visible from virtually all levels of recline.

Compared to previous screen sizes, these are a genuine treat and are ultra-clear.

Plus, I was delighted that the ample power ports meant I could fire up my laptop and charge my mobile phone. 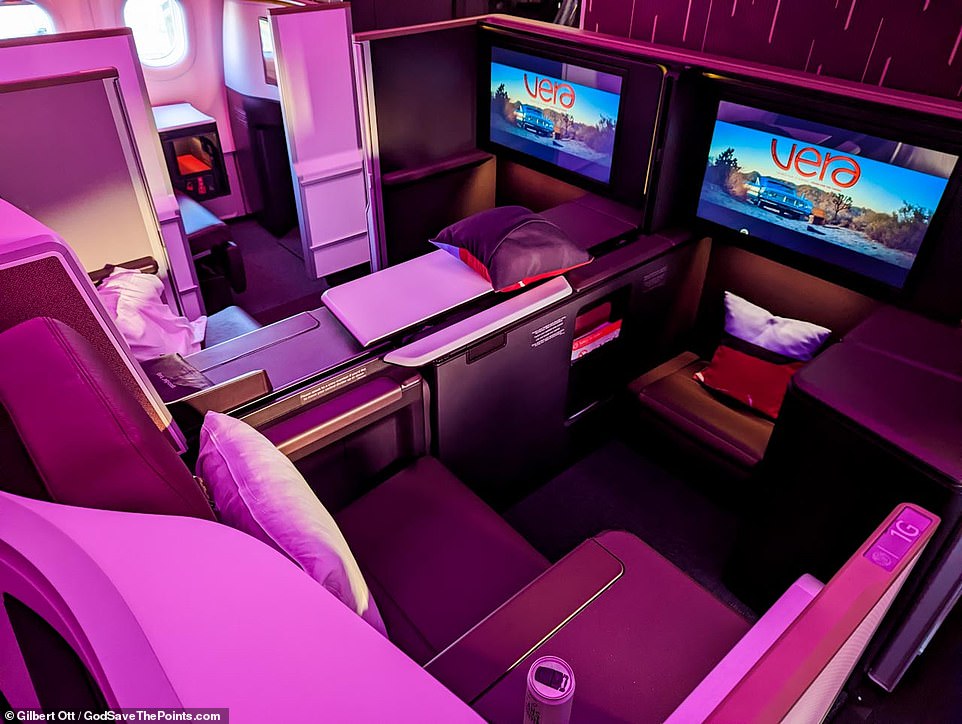 The front row of the A330neo business-class cabin features two ‘Retreat Suites’, pictured, with ‘wildly spacious seats’. They can be configured to form a quad socialising area 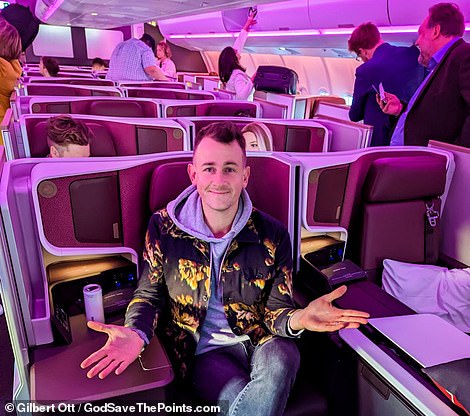 On the off-chance you look around the cabin and want ‘more’, as noted, Virgin has created two ‘Retreat Suites’, which feature a different seat to all others in the Upper Class cabin.

These heavily modified Thompson Vantage XL seats, until now, have exclusively been used as first class on some of the world’s leading carriers, including Etihad. On Virgin, you can enjoy it as an additional paid upgrade – £200 each way – on top of business class.

These wildly spacious long seats – 6ft 7.5in when fully flat – can be configured to form a quad socialising area with the adjacent seat, with up to four people able to dine together. And they come with 27-inch monitors that rival plenty of home TVs.

What about the bar? 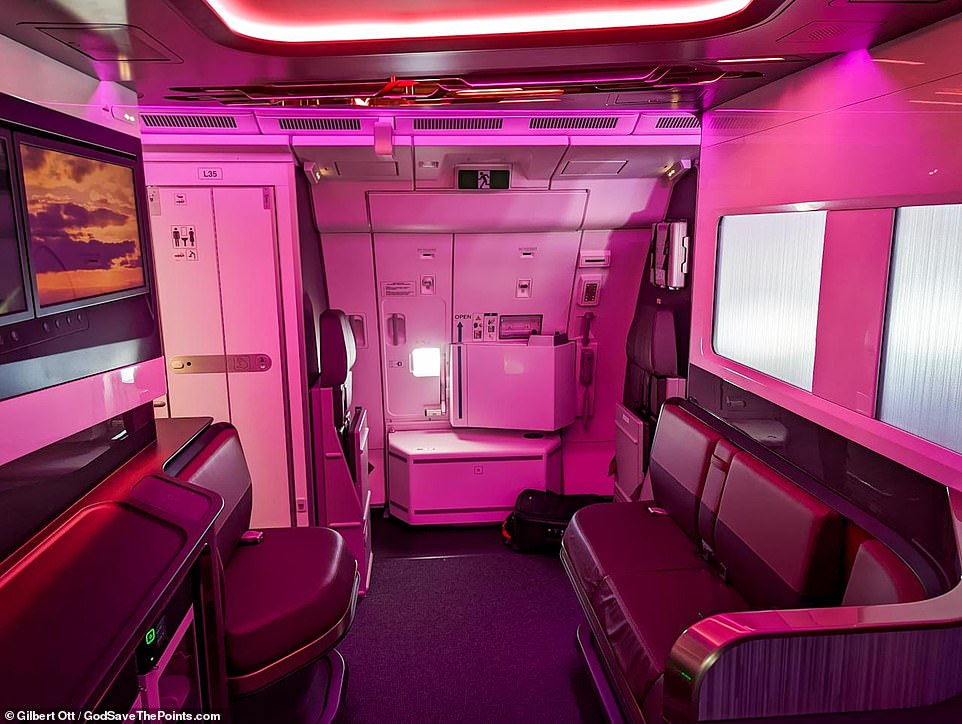 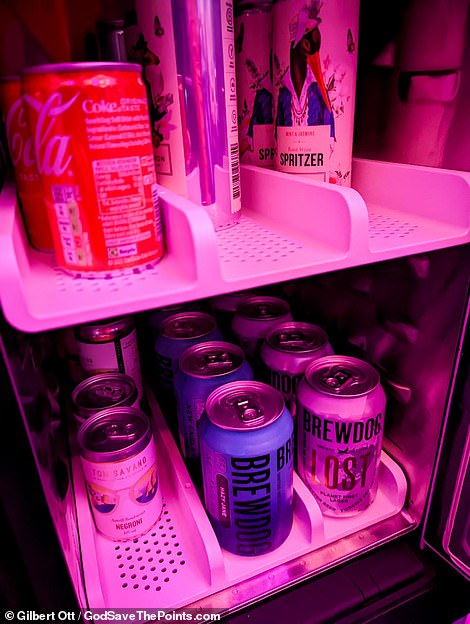 Virgin and onboard bars are like olives and a martini – they go together, but like many cocktail trends, they’ve evolved.

Here there’s a tweaked version of ‘The Loft’ lounge space found on board Virgin Atlantic’s A350.

It comes with power ports and seat belts, so that people can even enjoy the area in moments of turbulence.

The new social space also features a fridge with canned cocktails and ice cream, making for the ultimate in-flight treat (and which you can help yourself to). Grab a friend, grab whatever you fancy and hang around for a while. I certainly did!

There’s also Bluetooth connectivity for each of the televisions in this social space, so it’s entirely possible to grab four friends and watch a movie, if the Upper Class seat ever gets boring – though I don’t see how it could.

Forget sitting at a bar James Bond-style, this is better, with the addition of the fridge full of treats pure class.

This Virgin crew was as friendly and unique as ever. As an inaugural flight, there’s always a bit of fanfare, but I flew across the pond anonymously with Virgin twice in the past few weeks, and the experience was consistently the same.

Crews are free to wear non-gender-defined uniforms and display tattoos, and that freedom seems to be translating into positivity and pride in customer interactions. 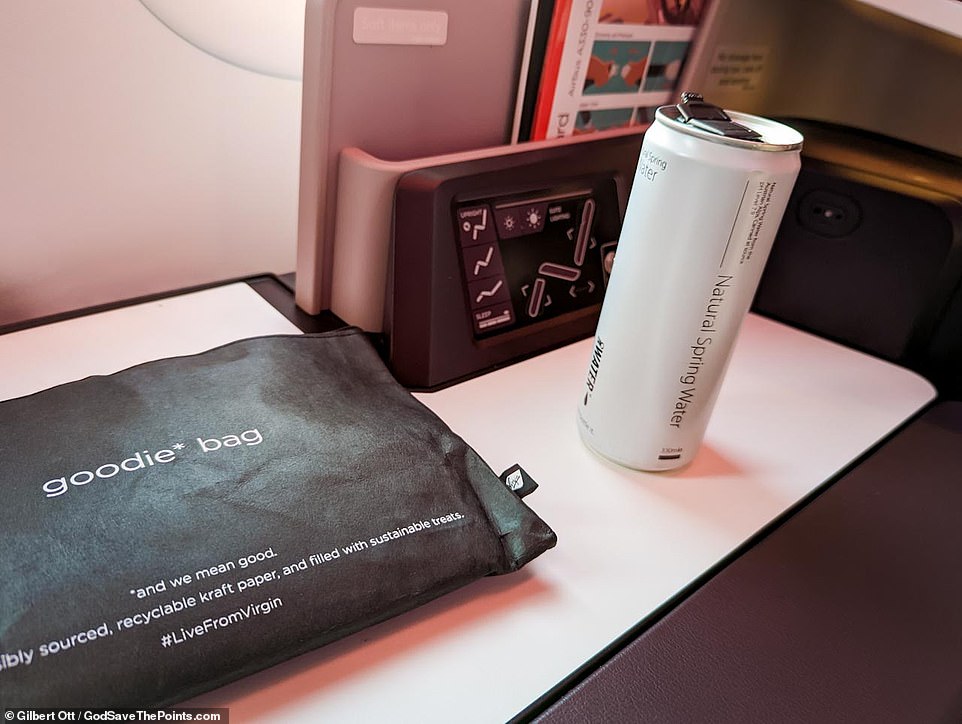 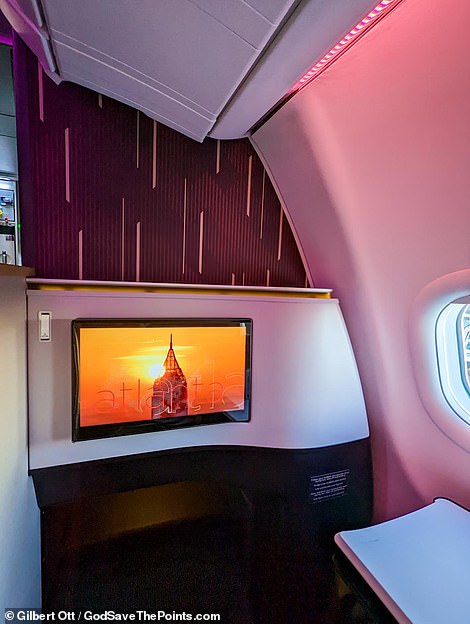 Food options on board were diverse, and my vegetarian korma meal ticked the boxes. Hard to beat a curry, some Gujarati green beans, rice and paratha flatbread in the air.

Other options included a miso and sesame-crusted salmon, and a chicken and wild mushroom pie with mash and red-wine sauce.

For those with a sweet tooth, the ‘indulgent’ Black Forest gateau was as described and the sweet brioche bread and butter pudding was utterly comforting.

Tipples? That’s a fairly important facet of the Virgin Atlantic experience and they did not disappoint.

Fizz-wise, Virgin offers both Ayala Champagne and Hambledon British Sparkling. I personally love the championing of the British sparkling scene, which is often lauded as among the world’s best.

Wines on the menu, meanwhile, are crowd pleasers, with options such as a Brook Ridge Sauvignon Blanc from New Zealand, Gianni Tessari Soave, a South African Pinotage from Diemersdal and an Italian Pinot Noir, also from Gianni Tessari.

Aside from cocktails such as the ruby slipper and margarita, canned cocktails, including a nice negroni, were available in The Loft lounge area.

The verdict on the Virgin A330neo experience 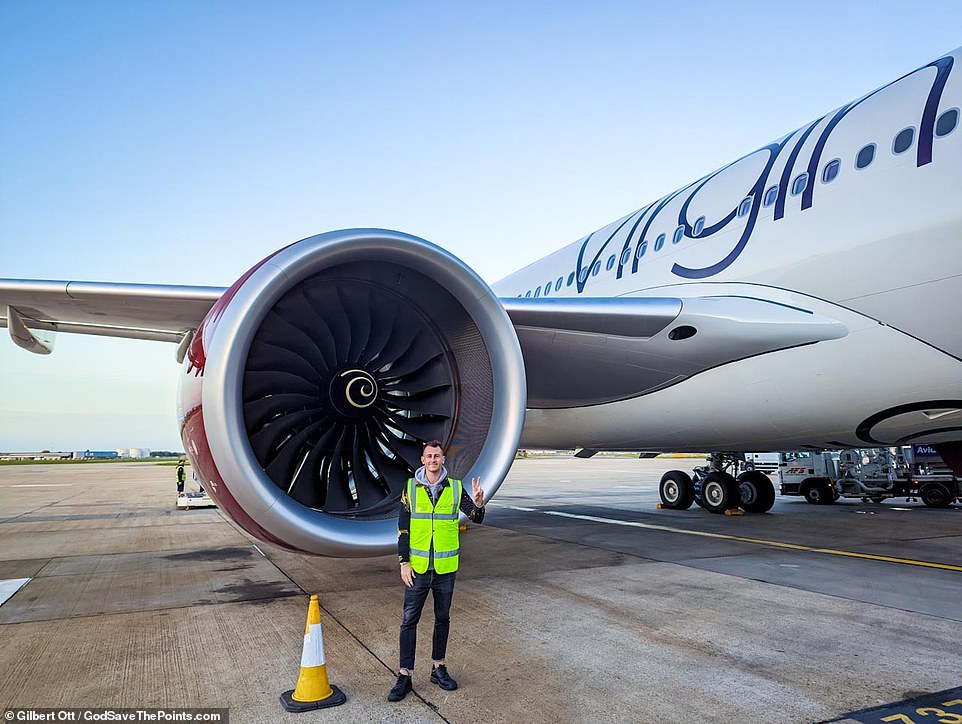 Gilbert (above, next to the A330neo), says that Virgin now has a contender for best transatlantic business class 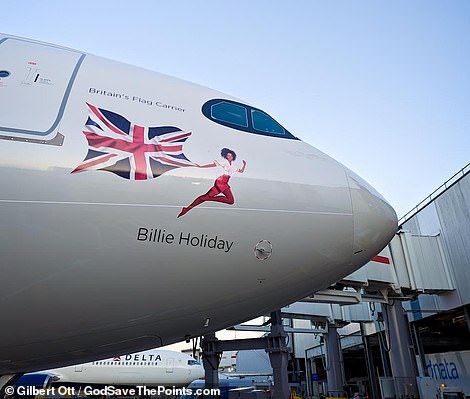 Virgin doesn’t fly to Doha or Tokyo, and those are the only two places where home airlines may offer a superior business-class experience, with the Qsuite from Qatar Airways and ‘The Room’ by All Nippon Airways remaining tough to dislodge from the top spot.

In the markets that Virgin does fly to, they’re now a contender for best business class.

Is this A330neo Upper Class suite better than the current best business-class seat flying on American, United and others who serve Virgin Atlantic routes?

Is this better than the British Airways Club Suite? Purely from the perspective of the seat itself, I’d also say yes, based on the next-generation technology offered.

Other factors form overall experiences for business-class passengers, based on personal preferences, but on seat alone, this is truly phenomenal.

I personally love the rest of the Virgin experience, including the iconic Clubhouse at Heathrow, but that’s more subjective.

The BA Club Suite and Virgin A330neo Upper Class seat are similar in size and privacy, but offering Bluetooth connectivity at every seat, as well as USB-C and wireless phone charging is a significant differentiator.

Both are fantastic, for what it’s worth.

Finding the Virgin Airbus A330neo is fairly easy, by the way. The airline is running these stunning new aircraft between Heathrow and US gateways Boston and Tampa.

If you get a chance to fly Upper Class, you certainly won’t regret it. This upgrade is about as good as it gets.

For more from Gilbert visit godsavethepoints.com.

FROM 27-INCH SCREENS TO PRIVACY DOORS AND A LOUNGE AREA STOCKED WITH DRINKS: THE VIRGIN ATLANTIC A330NEO CABIN HIGHLIGHTS SEAT BY SEAT

38in seat pitch with ‘calf supports’ and footrests

17.3in touchscreen with Bluetooth audio

Do not disturb light

27in touchscreen with Bluetooth audio