Home » Travel » Is this now the UK's toughest hill to cycle up?

Is this now the UK’s toughest hill to pedal up? Newly tarmacked Peak District lane has a ‘36.5% gradient’ and is named ‘the steepest climb in Britain’ by 100 Greatest Cycling Climbs author

The steepest road in Britain is officially Ffordd Pen Llech in Harlech, North Wales, according to Guinness World Records (GWR).

But intrepid cyclist and author Simon Warren, who specialises in hill climbs and is the author of the 100 Greatest Cycling Climbs series, has declared that he’s found a new contender – Bamford Clough in the Peak District.

It was previously a lane that turned into a track, but it has now been completely tarmacked over. 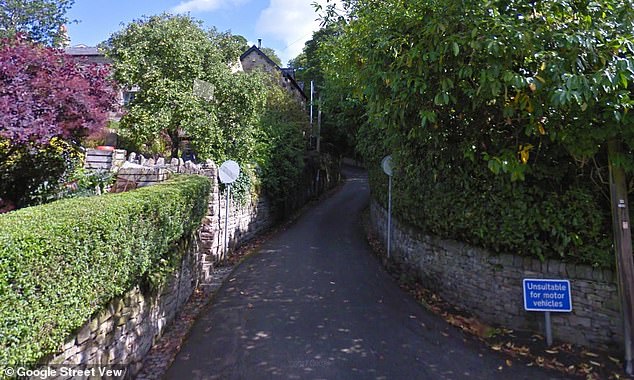 Bamford Clough in the Peak District has a 36.5 per cent gradient, according to hill-climb specialist Simon Warren. This Google Street View image predates the installation of a sign warning motorists that the way ahead has a 35 per cent gradient

Walker Alan James, writing on a ukclimbing.com forum, said: ‘Having walked [Bamford Clough], I can say with confidence that it is the steepest surfaced road I have ever encountered.’

Mr Warren recently tried to cycle up it, but the brutal climb defeated him, as road.cc reported.

He tweeted: ‘Not happening. There is no way on earth I can ride up that. The goalposts are moved again. I give you the steepest climb in Britain.’

Another cyclist, with the twitter handle ‘@geckobike’, also attempted to conquer the road, but also succumbed to the acute angle.

He tweeted that ‘none of us were able to cycle up it’ alongside a picture of a newly installed road sign at the bottom of the lane warning drivers of a 35 per cent gradient and that the way ahead is ‘unsuitable for motor vehicles’.

Sports social network site Strava marks the segment for the ‘insane bit’ of Bamford Clough as having an average gradient of 26 per cent, and Mr Warren said that he measured the peak gradient of the road at 36.5 per cent.

If that proves to be accurate, it could take the title of Britain’s steepest road. 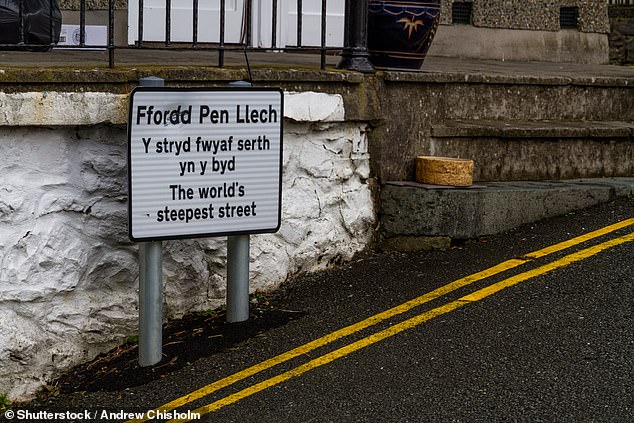 In 2019, Ffordd Pen Llech was declared by Guinness World Records to be the steepest street road in the world – but in 2020 the title was handed to Baldwin Street in Dunedin, New Zealand, after GWR reviewed how it takes measurements

In 2019, Ffordd Pen Llech was declared by Guinness World Records to be the steepest street road in the world, with a peak gradient of 37.5 per cent.

However, in 2020 the title was handed to Baldwin Street in Dunedin, New Zealand, after GWR reviewed how it takes measurements.

It decided that the best practice was to take measurements from the centreline of the street, which gave maximum gradients of 28.6 per cent at Ffordd Pen Llech and 34.8 per cent at Baldwin Street.