After roaming dreamy Rievaulx Abbey and the wild, winsome vales of the North York Moors, a good feed is near compulsory.

And, luckily, this national park’s southern fringe hosts The Star Inn, a Michelin-starred pub with rooms.

The village soundtrack in Harome may be of cockerels and the baas of sheep, but such peace now is a far cry from November last year when a ruinous fire swept down from the 14th Century’s inn thatched roof. Thankfully, much of the furniture and fittings survived, and with them the character of this Grade II listed building. 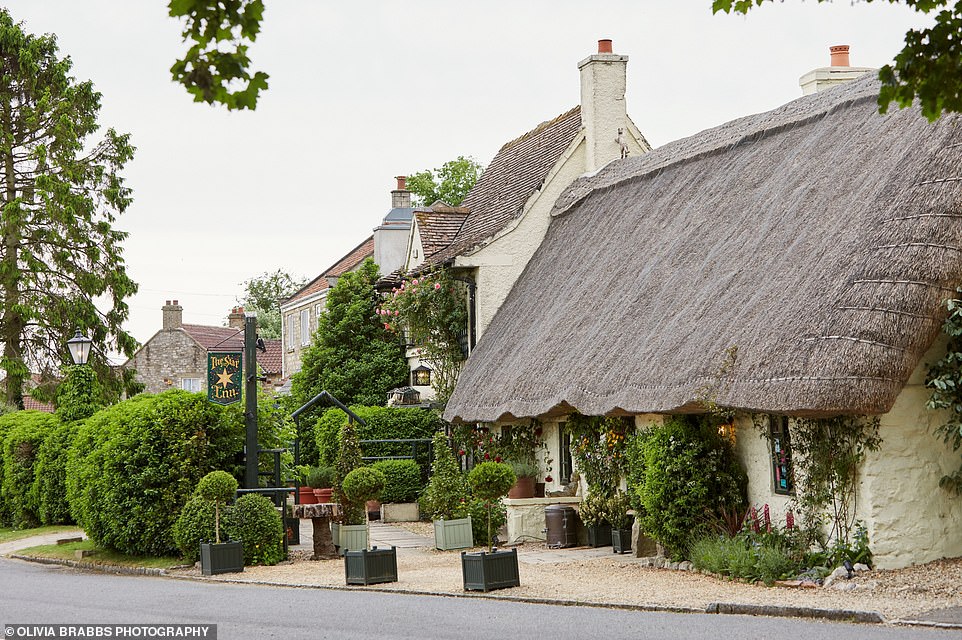 A blaze of glory: Richard Mellor checks into The Star Inn (pictured), a centuries-old gastropub in the North Yorkshire village of Harome. It has partially reopened after suffering fire damage last year 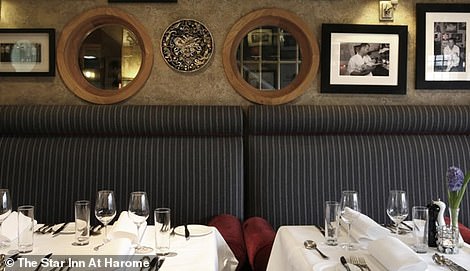 After much work, The Star partially reopened just a couple of weeks ago (although it has retained some of the charred roof timbers, in honour of the latest event in its long history), with full operation due by Christmas.

Once again chef-owner Andrew Pern can resume the approach he began in 1996, which ‘mimics the Gallic stress on local produce… swapping Provence or Perigueux for North Yorkshire’.

For dinner, I eschew the à la carte options in favour of a 12-course tasting menu. 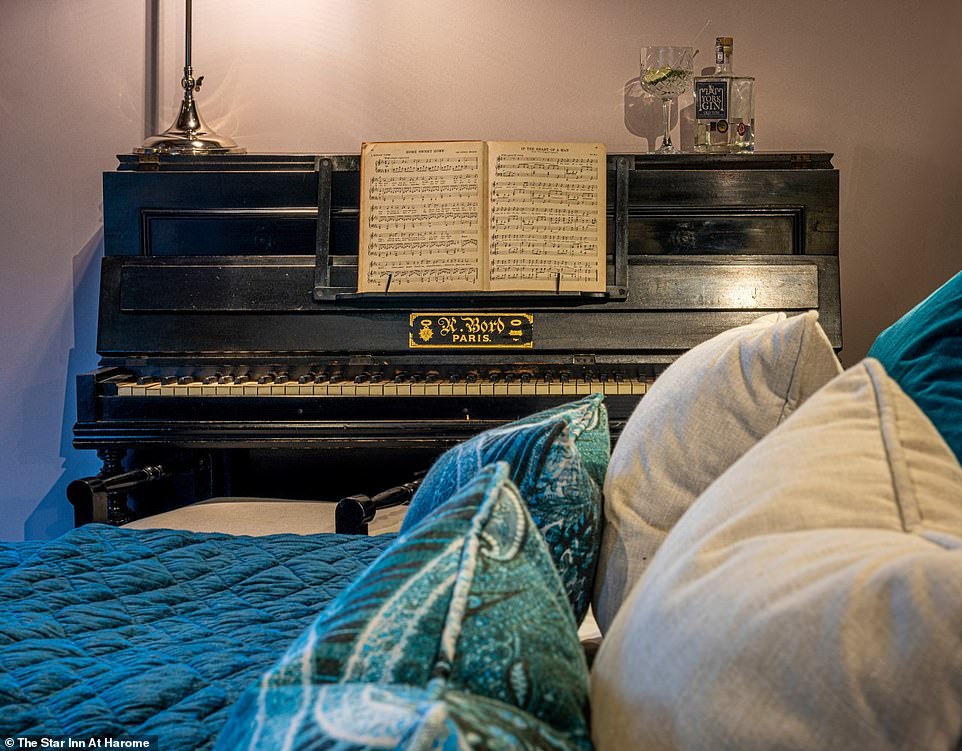 Above is room eight at Cross House Lodge, a converted farm building across the road from the inn 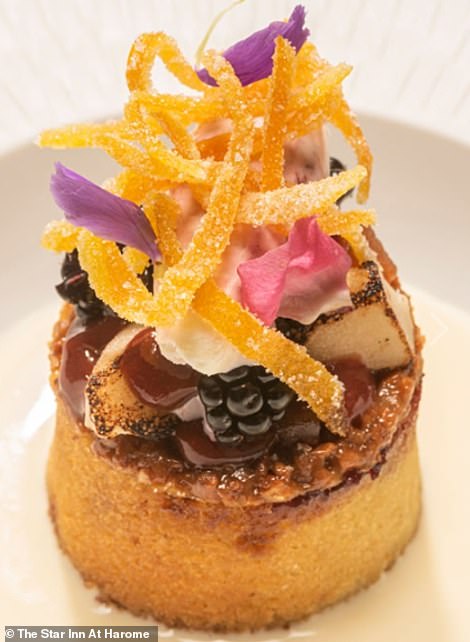 Yum’s the word: One of Pern’s masterful creations

Pern’s seasonal plates alternate every six weeks, except for his flagship foie gras atop black pudding, which is simultaneously rich and rustic.

A gourmet cauliflower cheese also proves a delight, while the rhubarb souffle and its hot, clovey sauce is a warming, wicked autumnal treat.

Pern’s superlative food (he also brings in fresh seafood from his home town port of Whitby) is augmented by 13 bedrooms.

These occupy Cross House Lodge, a converted farm building across the road and unaffected by that fire.

Some have bathtubs but only a very low shower head, while others have airy shower cubicles.

And each one includes an individual quirk: a swinging bed here, a piano there. 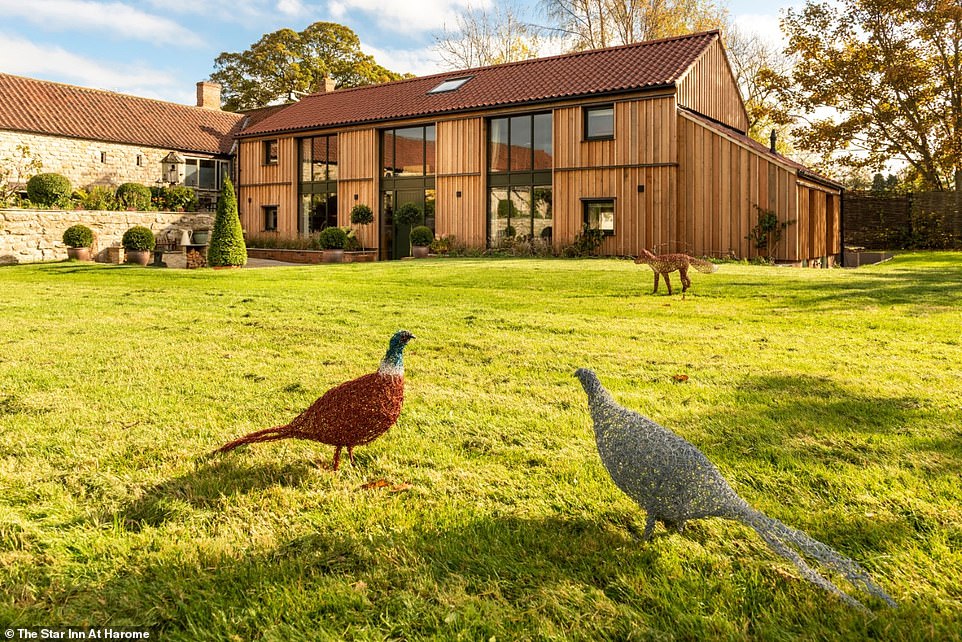 Rooms at Cross House Lodge, pictured, feature individual quirks such as swinging beds, Richard reveals. The lodge was unaffected by the fire 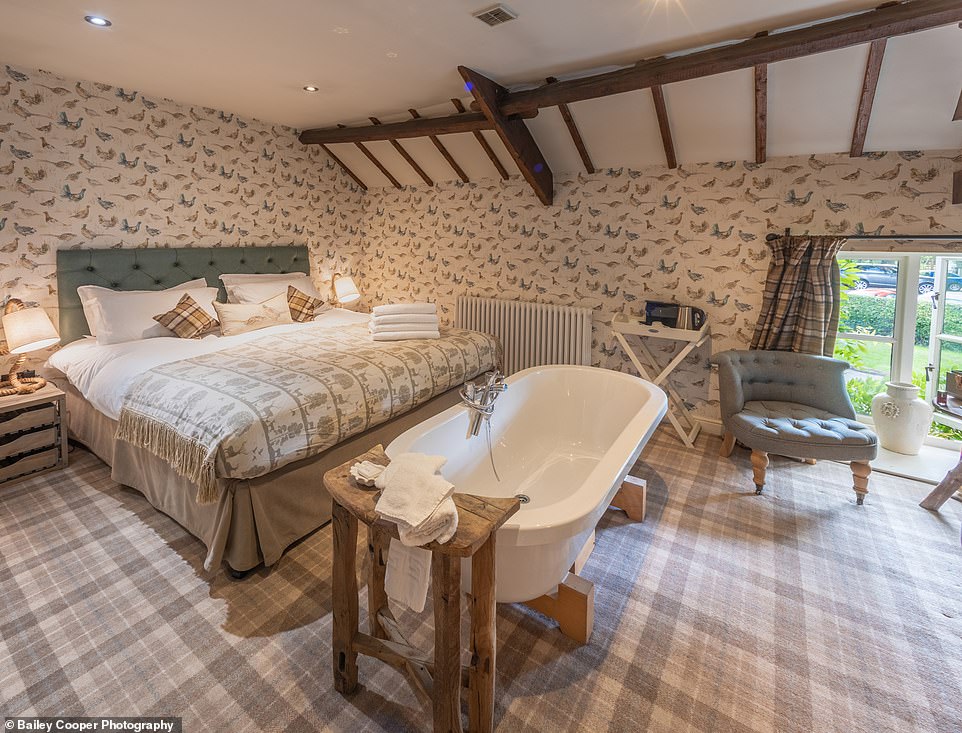 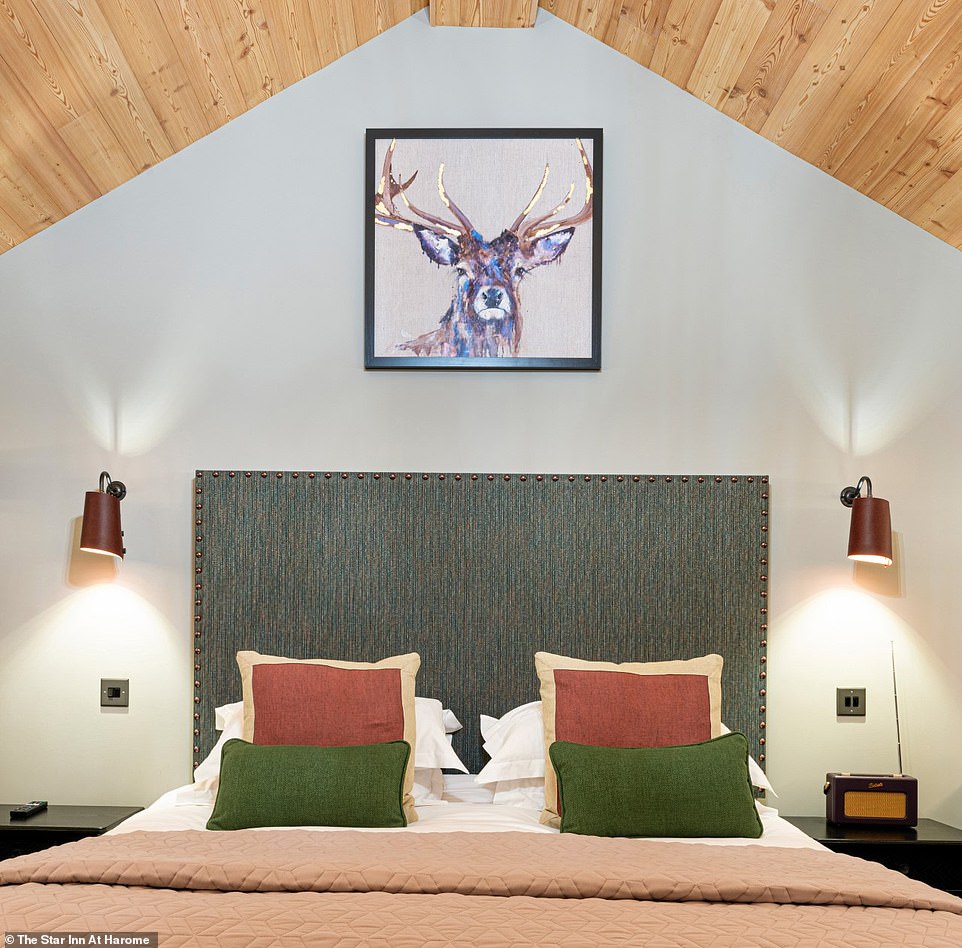 Four newer ‘barn rooms’ in Cross House Lodge are open-plan and contemporary. Above is ‘barn four’

Above the bar, room 3 is snug but most romantic. Number 5 (featuring a snooker table) and 9 are effectively suites. Dog-friendly rooms in a separate annexe are quietest.

At Cross House Lodge’s heart, that restful bar is characterised by low beams, plenty of leather sofas and taxidermy.

Jazz plays softly as couples chat contentedly in corners before going on to dinner. 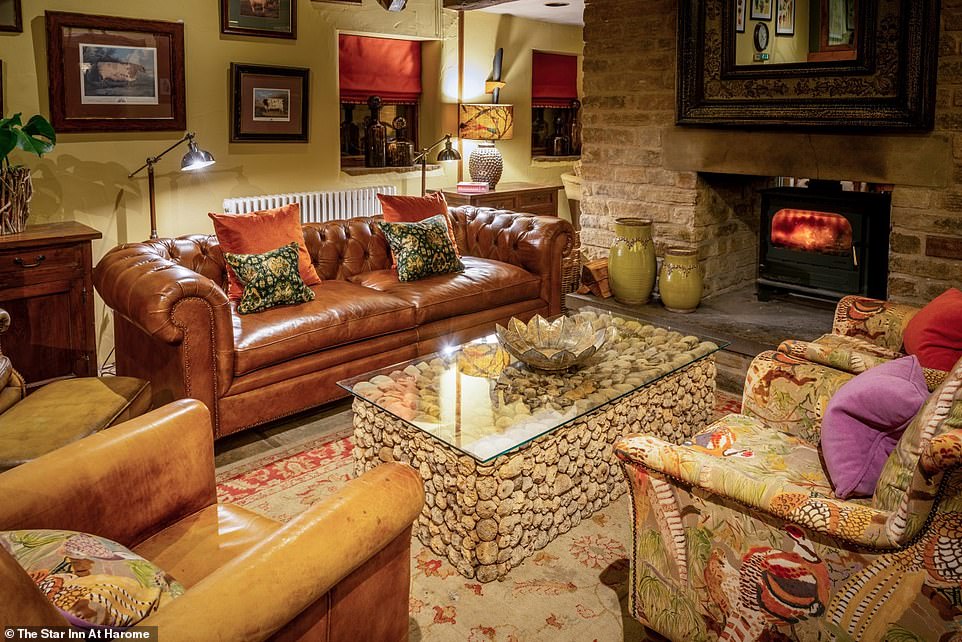 Pictured is the lounge area at Cross House Lodge, where you’ll find ‘low beams, plenty of leather sofas and taxidermy’ 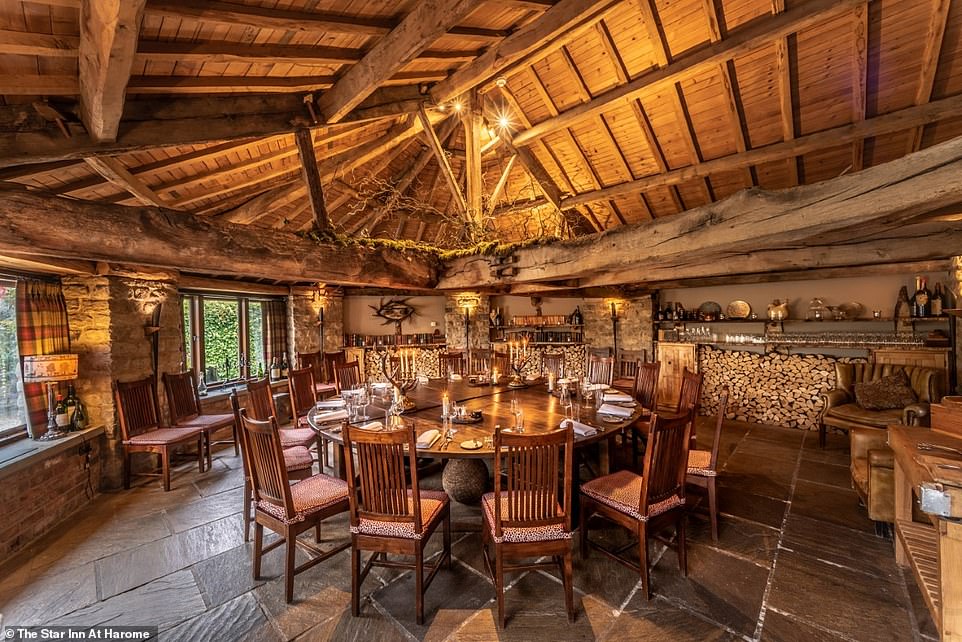 Come morning, breakfast is served in the Wheelhouse (above), where guests gather around a huge circular table. Richard tucks into ‘a sumptuous sausage and granola alongside coffee strong enough to power small armies’ 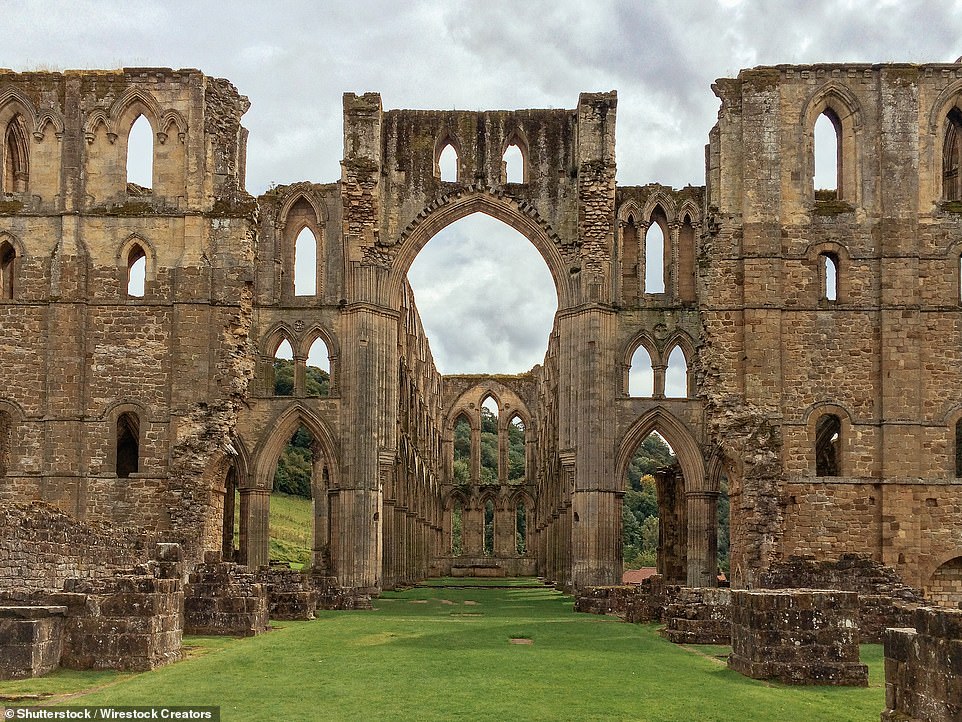 Richard roams the ruins of ‘dreamy’ Rievaulx Abbey, above, during his trip

Come morning, breakfast is served in the adjacent Wheelhouse, where up to eight guests gather around a huge circular table.

If that sounds disconcerting – having other diners in my eyeline was certainly disconcerting to me – then you can reserve a side table or order to your room.

The food is just as good: a sumptuous sausage and granola alongside coffee strong enough to power small armies – or, at least, more exploration of the Moors.