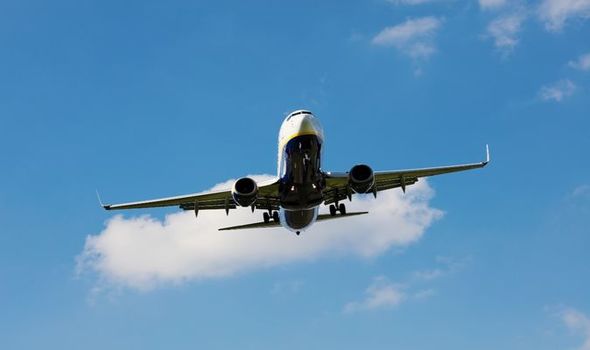 Face masks are compulsory on all internal flights in the USA as well as international flights leaving or entering the country. The strict guidance recently left one couple so angry they were ejected from the plane.

The passengers were travelling on the low-cost US airline, JetBlue, where wearing a face mask is compulsory.

Guidelines from the US Centres for Disease Control and Prevention (CDC) require that all passengers wear a face mask that covers their nose and mouth.

In a video shared across social media, the irate male passenger can be heard shouting at a crew member in the plane’s aisle.

The man loudly claims that he was only given one warning before being asked to leave the aircraft.

The aggressive man can be heard shouting: “I’m a vaccinated person. I respect all your rules.

“Every single one of them, I respect your rules. Ok? You gave me one f***ing warning.”

In the video he complained to a masked air steward that he had to wait too long for the flight and shouted: “How dare you.”

Other passengers can be heard cheering as the man is ejected from the plane by the airline crew.

One of the passengers shouted “be civil” as the situation escalated and the man became more angry.

The woman from the couple was seen further down the aisle arguing with another member of staff.

She told fellow passengers she did not know why she was being asked to leave the plane and claimed the crew member would not “tell her why”.

The airline said the pair “became verbally and physically aggressive towards crew members before eventually exiting the aircraft”.

“If a customer refuses to wear a face mask after being asked, crew members will work to deescalate the situation to the best of their ability to gain compliance prior to removal,” they said.

“The safety of each customer and crew member is our top priority, and we must work together to follow the federal mask mandate during the travel journey.”

The couple are now banned from ever flying with JetBlue following the incident.

Current CDC rules on face masks state that one must be worn on all transportation in the USA as well as in transport hubs.

In the UK, most airlines require passengers to wear a face mask at all times while in the air.

Travellers with TUI, easyJet, Ryanair and Jet2 must wear a face mask during flights while children under the age of six are excused on some airlines.

British Airways states that passengers who are exempt from wearing a mask must carry “supporting documentation”.

The airlines reserve the right to eject passengers from the plane if they refuse to comply with regulations.