Home » Travel » Hotel hacks to give your home a holiday feel

Hotel hacks to give your home a holiday feel: Staff from luxury lodges and etiquette guru William Hanson reveal all, from making a 5-star bed to setting the table in fine-dining style

Since we can’t go on holiday – here’s how to bring a bit of holiday into your home.

MailOnline Travel asked staff members from some of Britain’s poshest hotels – including The Landmark London and The Lowry in Manchester, as well as a designer and etiquette expert William Hanson – for advice on adding five-star-hotel touches to your house.

From setting the table in fine-dining style to making your bed fit for an executive suite and from giving your rooms a heavenly scent to tweaking the lighting for a glorious glow, we reveal the lowdown for a luxurious lockdown. 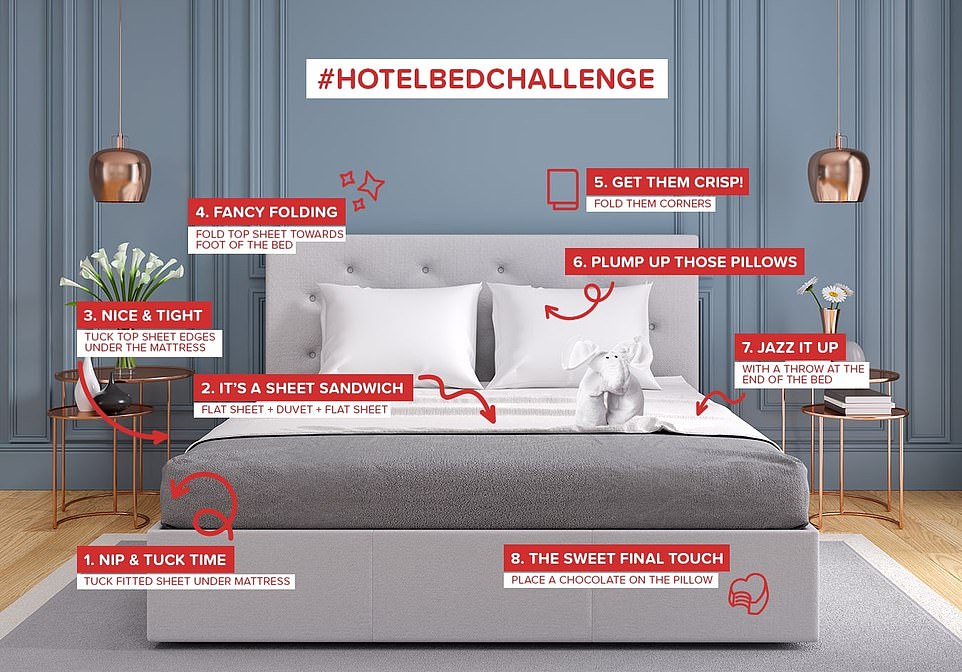 Want to tuck yourself into a hotel-style bed? Here’s the dream advice.

Sandor Varga, Assistant Director of Accommodations at The Landmark London, said: ‘Adopt the triple-sheeting technique. By layering a duvet between two sheets it will give a crisp feel and eliminates the need for a duvet cover. And create what we call a “hospitality corner” by tucking sheets neatly underneath the mattress using overlapping folds. It is kind of like wrapping a present.’

Tzveta Ivanova, Executive Housekeeper at the five-star Milestone Hotel & Residences in Kensington is The Cateys’ 2019 Housekeeper of the Year.

She added: ‘Pop some extra pillows and cushions onto your bed and stack them upright rather than laying them flat. Fold a quilt or blanket over the foot of your bed to create layers and add texture. Some carefully positioned, artful objects or beautiful looking books on your nightstand will complete the look. For a posh hotel-style bed, Sandor Varga, Assistant Director of Accommodations at The Landmark London (pictured), said: ‘Adopt the triple-sheeting technique. By layering a duvet between two sheets it will give a crisp feel and eliminates the need for a duvet cover’

‘We always like to spoil our guests with thoughtful little surprises in their rooms, and turndown treats. You can do something similar at home by baking some fresh cookies, putting them into a pretty box and enjoying one when you have a cup of tea. They will smell delicious as they’re cooking, which will instantly make your home extra-heavenly.’

Varga also suggested using pillow mist before getting into bed ‘to dream better’. Lavender and chamomile are well known for their relaxing benefits, she revealed.

And flowers will lend an air of posh, too.

Varga said: ‘The power of fresh-cut flowers is real, their smell is healing and comforting in a bedroom. Use seasonal flowers with a gentle smell matching the colour palette of the room.’

She said: ‘Lightly wipe with a duster, it will bring out the shine and resist the dust. Your bedroom will be clean and shining with a pleasant perfume.’

Give your mealtimes a Michelin-star makeover – by setting the table fine-dining style.

Jason Orton, Director of Guest Services at the five-star Lowry Hotel in Manchester, reveals how to lay it all out. 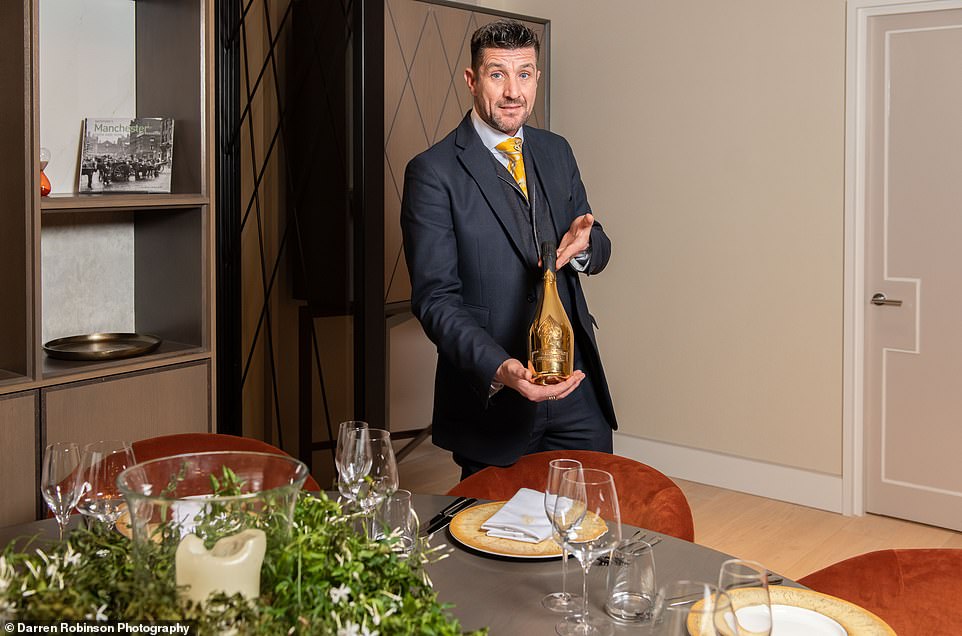 Give your mealtimes a Michelin-star makeover – heed the advice of Jason Orton, Director of Guest Services at the five-star Lowry Hotel in Manchester

‘This can either be removed after the guest has sat down and napkins have been broken or can be left until after mains have been served. A charger plate would never be left on the table by dessert as it is regarded as bad etiquette, as is using them for eating purposes.

‘The charger was initially used to catch pieces of food and prevent spills onto the tablecloth. Some say it aids in keeping the food warm as it helps retain heat for the dinnerware.’ 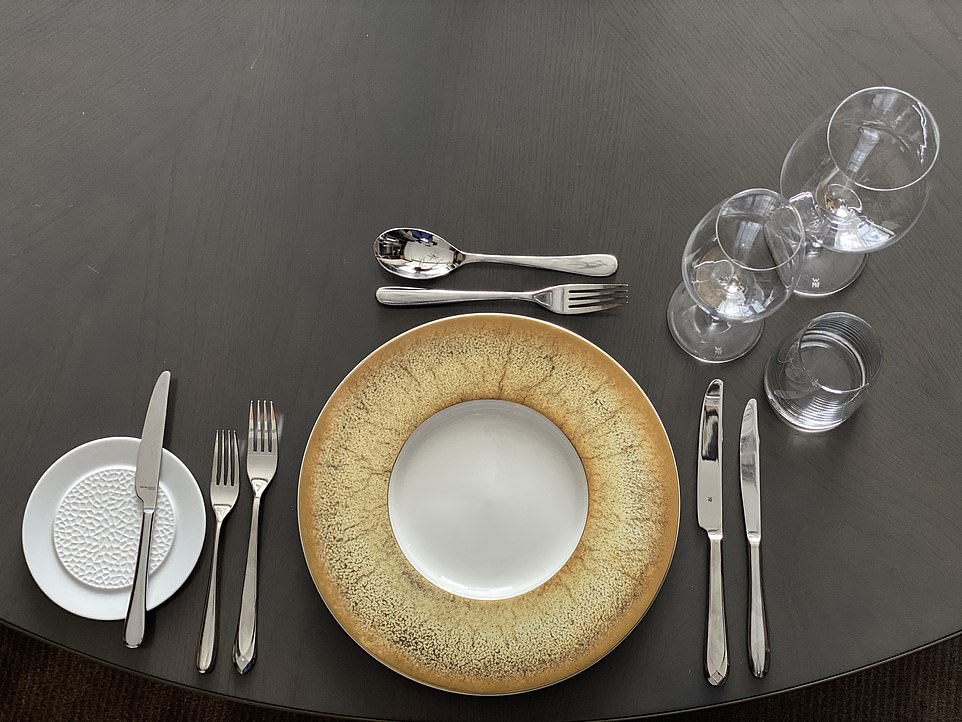 ‘This needs to be perfectly polished and placed well,’ says Jason. ‘All cutlery on the table should be a thumbnail from the bottom of the table. Tip – place your main plate on the table while setting so you know how much space to leave for this. Cutlery should never have to be moved to place a plate down. It should be in the right place from setting stage. Some people find what cutlery to use at what course bewildering.

‘The golden rule is to work from the outside in and for me a good restaurant should replace the cutlery fresh to the table after each course. Dessert cutlery if set on the table should be fork on the bottom facing right and spoon above facing left. When you’re ready for dessert and the table has been crumbed the dessert cutlery should be pulled down to a thumbnail from the bottom of the table.’

Jason said: ‘Never under-estimate how important this is as each piece of crockery should really present a frame for the food you present. Obviously, crockery should either match perfectly – or be eccentrically mismatched to create a theme – polished and with no visible fingerprints. Tip – warm water and a little vinegar is a good tool to polish plates.’

Jason said: ‘Crystal clear glasses that are odourless are so important. After the glasses have been washed fill a bowl or ice bucket with boiling water and use the steam and a polishing cloth to achieve the perfect shine. 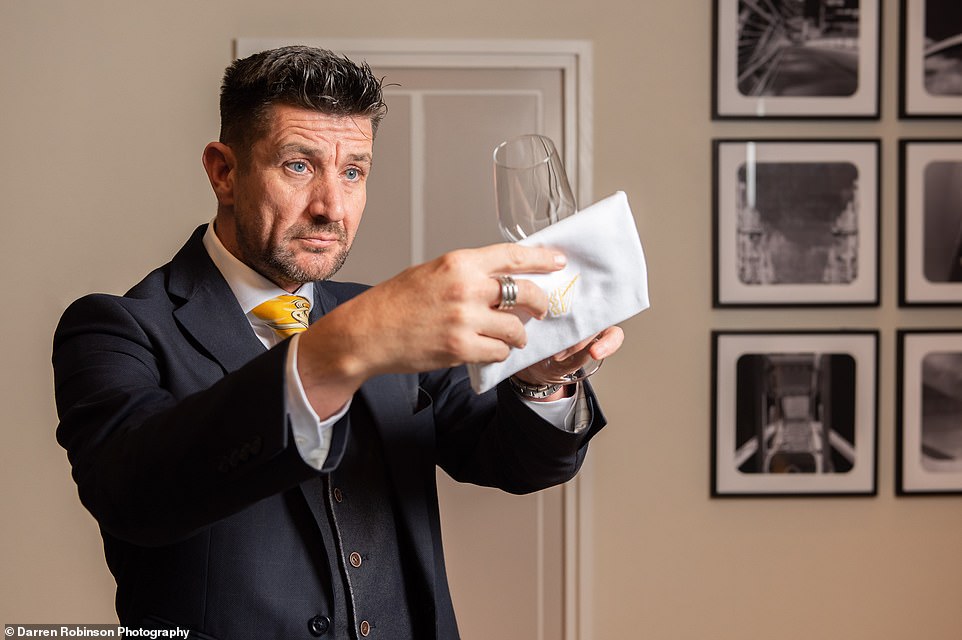 Jason said: ‘Crystal clear glasses that are odourless are so important.’ He recommends using steam to polish them 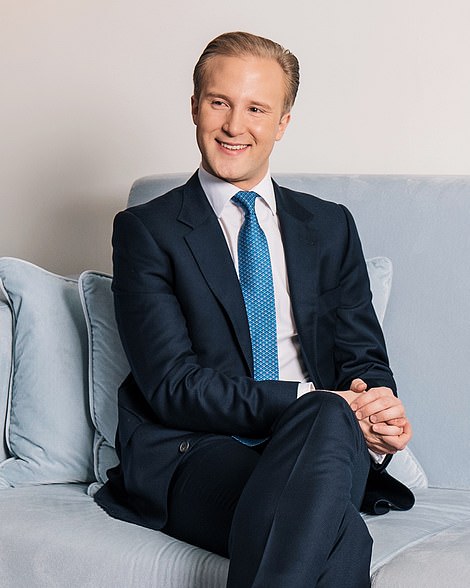 ‘Many different opinions on placement can be found but for me the rules are – usually three per guest, the stem of the white wine glass (the smaller one) should be in line with the main knife, the water glass should be to the right and slightly lower and the red to the right and slightly higher. Tip – if glasses are not being used during the meal make sure you remove them.’

As few folds as possible is the key, apparently.

Jason said: ‘For me, a five-star napkin has as few folds as possible to ensure the napkin is as fresh as it can be for the guest. I also prefer a fold where it’s easy to grab a corner to open the napkin, so placement is slick and fluid.’

‘Your choice of centrepiece can really finish the setting,’ said Jason. ‘Fresh flowers are always best and candles help make the atmosphere more appealing. Rules for this should be to keep your centres around glass height so that you are able to see your guests across the tables. If taller ones are being used make sure it does not impede sightlines.’

Etiquette expert William Hanson added: ‘Arriving to any table – in a hotel, restaurant or house – that has been set correctly and where the accoutrements gleam always ensures the food and drink that follows will taste even better. A dirty, muddled table doesn’t inspire confidence in the cook.

‘And there are indeed many different ways to set glasses on a table. How hotels and restaurants will do it will differ from private houses as in a private home the guests don’t choose what they are eating or drinking and so it is easier all round. In private houses glasses are placed in order of use (with the glass used first closest to the diner). The glass to be used for the main course should be placed directly above the knife.

‘Flowers used for centrepieces should be fairly fragrance-free, so their smell does not conflict with the aromas of the food or wine.’ 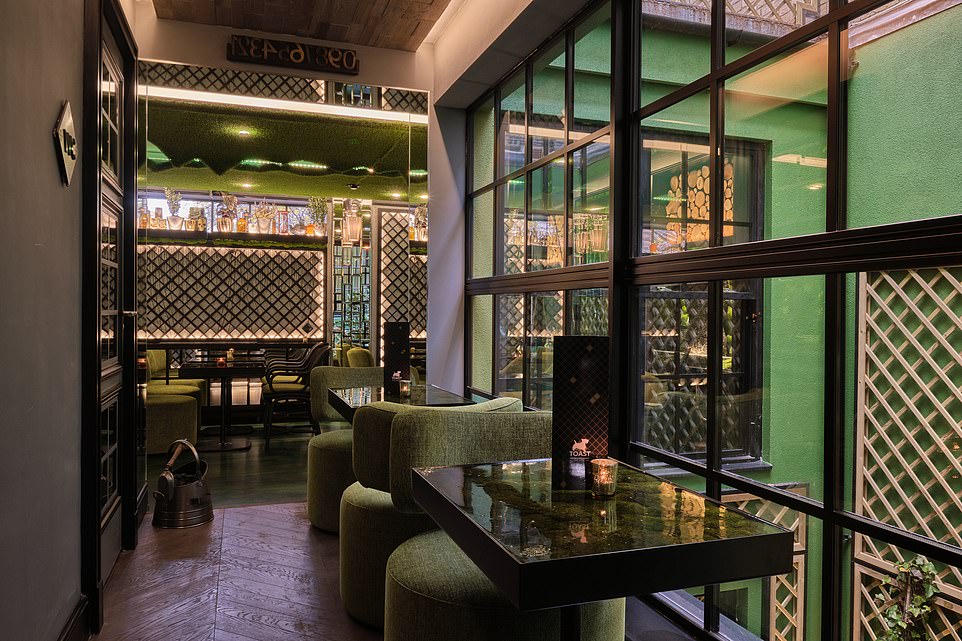 Henry Chebaane, designer for the newly opened Gyle Hotel in London’s Kings Cross has some general pointers to make your house a bit more five-star-hotel-like.

He said: ‘Lighting can enhance any home immediately. Avoid using ceiling lights and favour instead floor, table and wall lights – they create a more flattering glow and some dramatic shadows.

‘Two or more indirect light sources combined will give a richer, warmer feel. Dimmable switches are an effective low-cost mood-enhancing tool. They can often be retro-fitted on the electrical lead for very little. Or use the lowest wattage bulb you can bear as this will automatically give you a cosier, softer atmosphere.

‘Votive candles, meanwhile, are a natural mood enhancer and their effect can be optimised by placing the candle on or into a reflective surface – glass, mirror, metal – as this will create a local specular effect around the space.

‘The sense of smell is the next element that one could explore.

‘We often hear about the proverbial smell of coffee or fresh bread… but really, these clichés are actually not that practical. 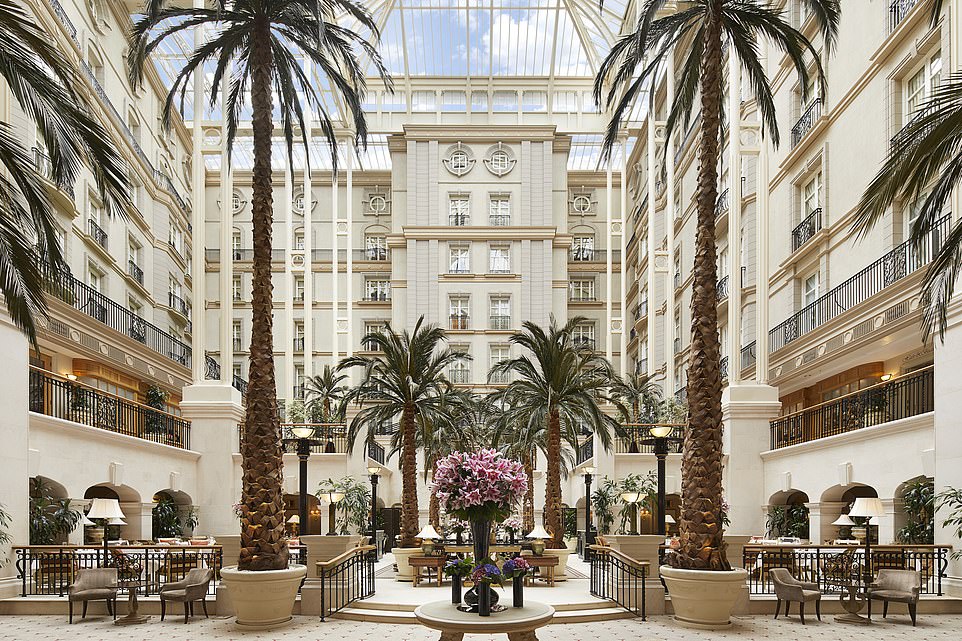 ‘A tip I picked up from Native American cultures (they use it in cleansing ceremonies) is to roll a bunch of fresh sage, tie it into a bundle and let it dry. It can store almost forever. Whenever you feel like it, you light the end of the sage bundle (off a candle for example) and blow the flame out. The ash will diffuse a soothing botanical scent that you can waft around the room. It’s economical as just a few seconds will do and the aroma will linger for the day or longer.

‘Then edit your soft furnishings a bit. Often, you don’t need to buy anything new to elevate the experience of your own home.

‘For example, try to limit your dominant colour palette to three (in as many tones/patterns as you want) in one area of the room. This will make your furnishing immediately feel richer.

‘Once the colours are sorted, try different arrangements of your furniture and accessories to create neutral spaces around objects: between pieces, on shelves, on walls. This allows your eyes to reset between each item you look at during the day. In turn, this will help you appreciate the textures and proportions of your surroundings with more intensity.

‘Even in a busy home with children it is possible to make it feel like your own sanctuary. With a bit of planning, you can make a good meal from modest ingredients… the same goes with your home interiors.’