Home » Travel » Ghent for under £100 a night: Where to stay and top places to eat

Ghent for under £100 a night: Where to stay and top places to eat in a dreamy city full of Romanesque architecture and historic churches 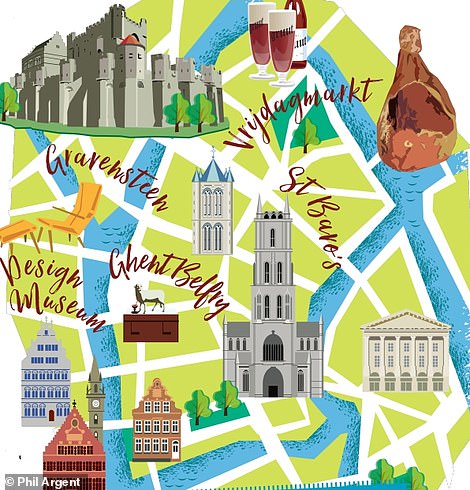 Prepare to be charmed in Ghent, a city that’s home to Romanesque architecture, historic churches and museums

Strolling through Ghent’s medieval centre, it’s hard to imagine this dreamy Belgian city was one of capitalism’s earliest hubs.

Today, it’s more cultural than mercantile, with its Romanesque architecture, historic churches and museums. Prepare to be charmed.

The monastic cells, arched windows, columns and quiet grounds of this former 19th-century monastery make it a lovely oasis in the middle of town. Original fittings are folded into the contemporary design of many rooms.

If you’d prefer a touch of autonomy, try this ‘self-hosting’ hotel. You’ll check yourself in and only see the staff if you need something. 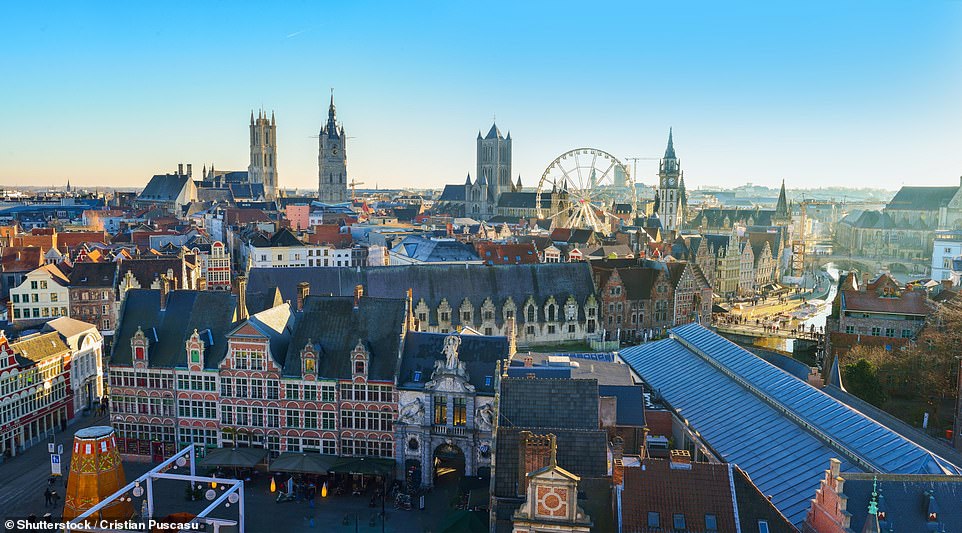 The rooms feel like home, with plenty of nooks and crannies to relax in. One of several Heirloom properties in Ghent, it is in the middle of the historic university district.

This 19th-century mansion in the Old City has been turned into one of Ghent’s best mid-range hotels. The original timber-panelled staircase leads to rooms in the main building.

The rest are in the garden, and all have quality king or queen-sized beds and large black-and-white photos of Ghent’s attractions on the walls. Your generous buffet breakfast can be taken in the dining room or on the terrace. 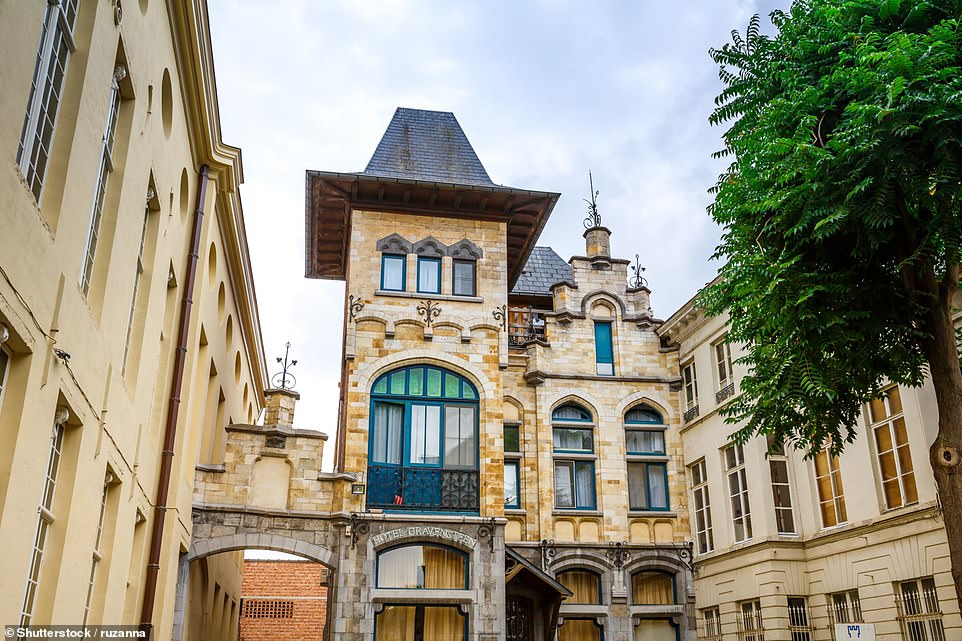 Hotel Gravensteen, pictured in the centre, is an 1860s mansion that overlooks the city’s iconic 12th-century fortress

What could be a more quintessential Ghent experience than staying in an 1860s mansion overlooking the city’s iconic 12th-century fortress? The original design has been preserved, including the high, stucco ceilings of the entrance hall. Not all of the three-star hotel’s furnishings are in keeping, but the sense of grandeur remains. With its cosy terrace and bar, the hotel is hard to beat in central Ghent.

What to see and do

Ghent’s design museum appears to be suffering from an architectural identity crisis, showcasing styles from the 18th century to the present. This mash-up makes sense once you see the vast range of furniture, household and contemporary design on display. Exhibitions on everything from robots to youth fashion add variety (designmuseumgent.be).

The Adoration Of The Mystic Lamb 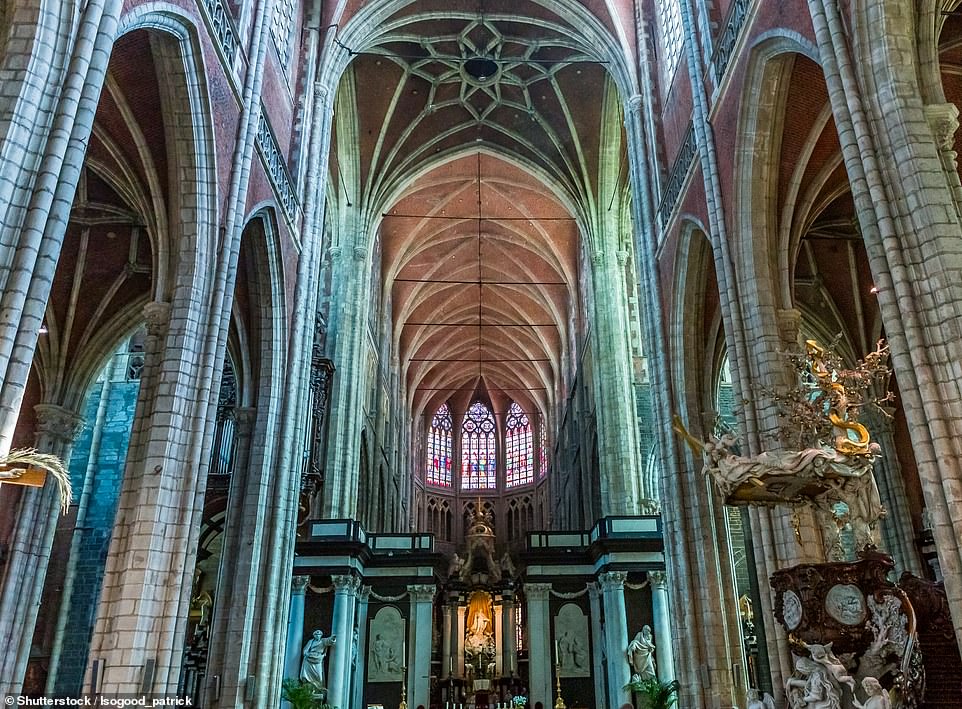 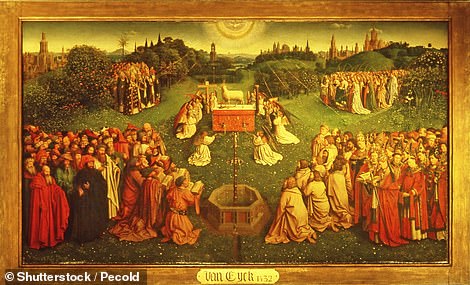 The Adoration Of The Mystic Lamb, pictured, was completed by the Van Eyck brothers in 1432

Ghent’s St Bavo’s cathedral contains one of the great artworks of the western canon. The Adoration Of The Mystic Lamb is a mesmerising altarpiece, completed by the Van Eyck brothers in 1432. Revered for its innovative representation of humans and nature, it has the Lamb of God at its centre (sintbaafskathedraal.be).

One of three medieval towers in central Ghent, this 300ft belfry dates to 1313 and is Unesco-listed. Atop it is a gilded dragon from Bruges, which remains an icon of the city. Used for both sacral and defensive purposes through the centuries, the belfry is now a major attraction, offering wonderful views. 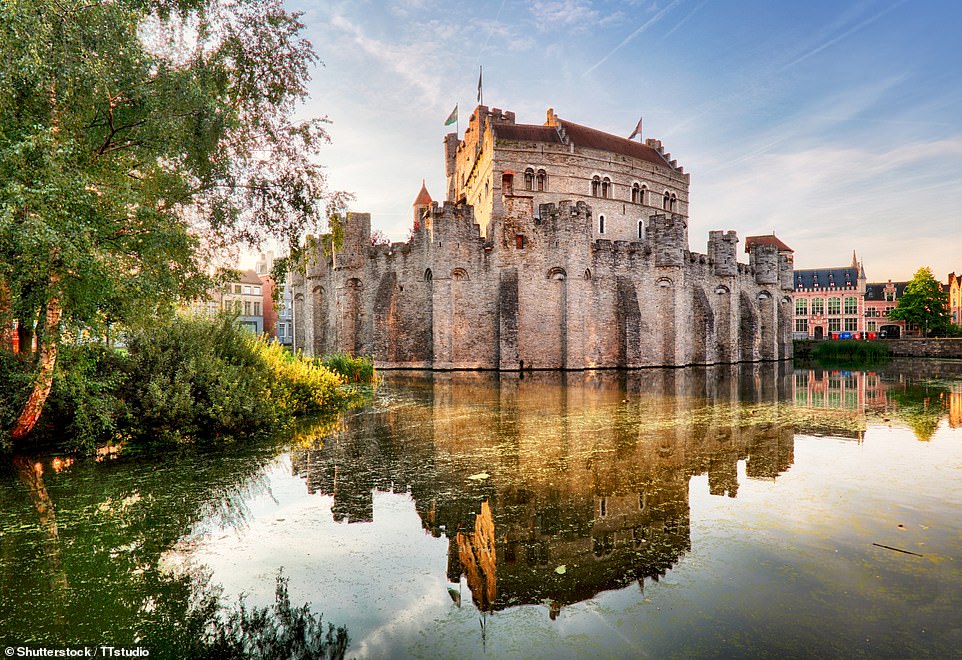 Wander around the forbidding fortress of Gravensteen, pictured above, with an audio guide 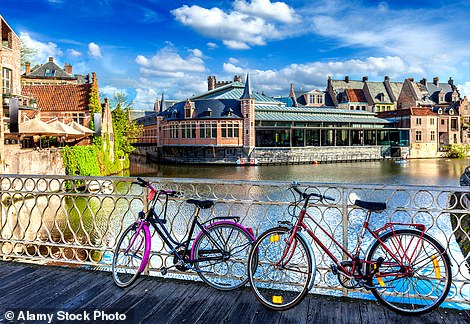 Local colour: A view of the canal that runs through Ghent

This forbidding fortress, also known as the Castle of the Counts, was the seat of the Counts of Flanders until 1353. It’s one of the most complete medieval fortresses in Europe, and is even surrounded by a moat. Visitors can see the gatehouse, ramparts, keep, Count’s residence and some grisly tools of torture. Audio guides are available (historischehuizen.stad.gent).

Trust Ghent’s students to know where you can get a good meal on a budget. Meatballs (ballekes) of many varieties roll out of the kitchen, serving discerning diners at minimalist communal tables.

The cheese balleke in tomato sauce is a classic, and vegetarian options include butternut squash with a polenta crust. The £10.50 lunch is a steal (ballsnglory.be). 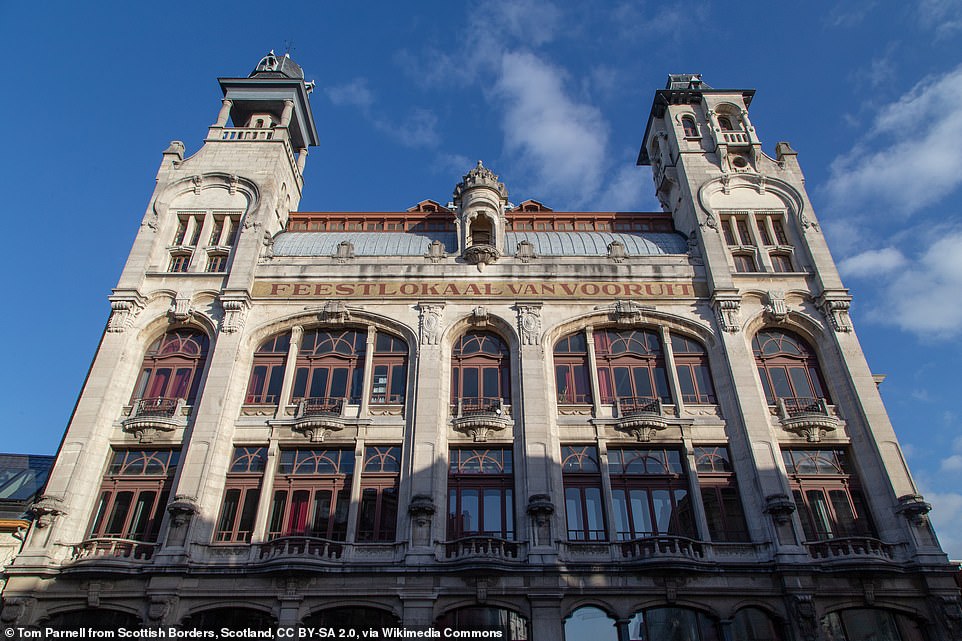 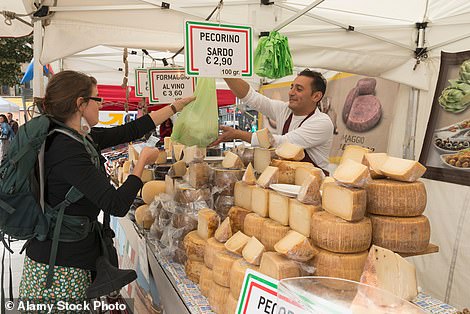 A street market in Ghent, a city with plenty of options for gourmands on a budget

Built before World War I, Vooruit (‘Forward’) is an iconic cultural and event space created for Ghent’s socialists. It also houses a vibrant and very reasonable Art Deco cafe.

You wouldn’t think Middle Eastern and Mexican food belong together, but Amigo, with its sociable bar, upbeat soundtrack and sun-trap terrace, pulls it off. Its trick is small, cleverly reimagined plates of classics designed to share.

Try the lip-tingling fish with tequila and chipotle (£12.40), or halloumi with pistachio, harissa and apricot crumble (£10.70). For more information visit amigosareforever.com. 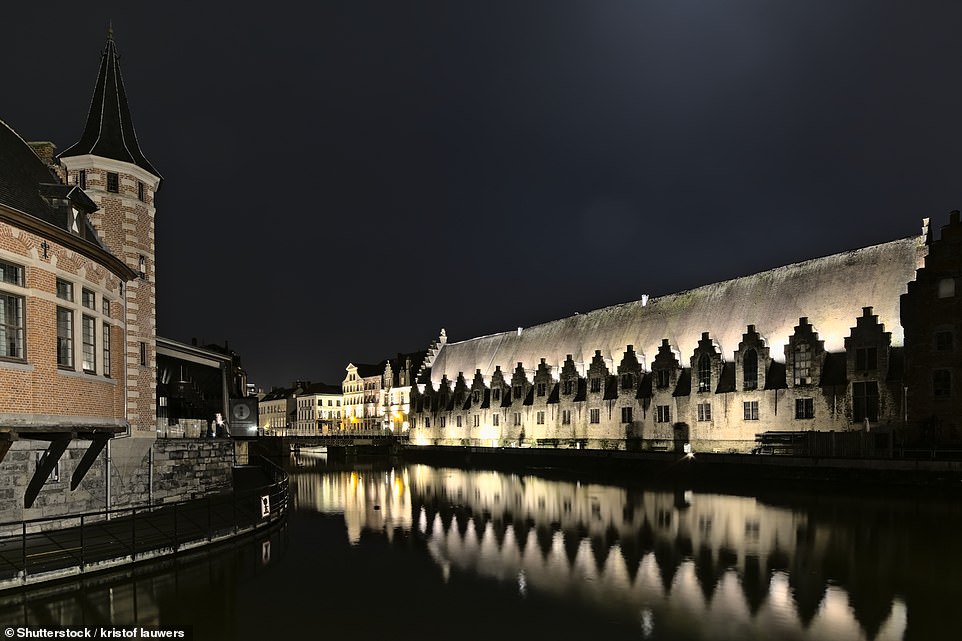 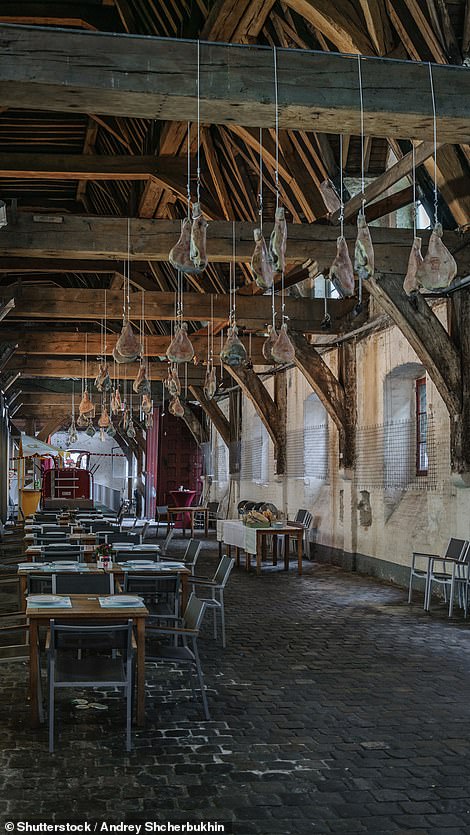 Making great use of a covered market dating back to the 15th century, the Great Butchers’ Hall (Groot Vleeshuis) is the place to try Eastern Flanders’s 175 regional specialities.

Dining under a canopy of Ganda hams, you can try Ghent sausages, including a garlicky horse meat (£11.70), alongside local artisanal beers, cheeses and mustard (grootvleeshuis.be).

The cast-iron colonnades and skylight of this converted warehouse near the Leie river strike you first.

Then the irresistible smells hit you: Bresse chicken (perhaps the world’s best, £22.80) and charcoal-roasted West Flemish Red beef (£23.70). Want to stay in budget? The three-course Menu Pakhuis (£32.90) will set you up for the day (pakhuis.be).

Located in the Vrijdagmarkt, or ‘Friday Market’, square, this is the best place to sample Belgium’s famous (or should that be ‘notorious’) beers. A cosy, convivial spot, its flagstone floor and timber bar have absorbed Ghent’s widest range of Belgian beers over the years (dullegriet.be).

How to get there

Eurostar (eurostar.com) offers return trips to Brussels from London St Pancras for as little as £49.

From Brussels Central Station, take a 36-minute train to Gent-Sint-Pieters. The return fare costs around £16.