A trolley of herbs for your tea and fish steamed on hot stones at the table: Mouthwatering footage of a £930 meal (for two) in the 3-Michelin-star Le Louis XV restaurant in Monte Carlo

The lid has been lifted on what it’s like to eat at one of the world’s best – and most expensive – restaurants.

His footage, viewed millions of times on YouTube, reveals that it was an out-of-this-world experience – Mediterranean fish was steamed on hot stones at his table, herbs for cups of tea were snipped from a mini-garden on a trolley, and a waiter scooped butter from local farmers onto a piece of marble. 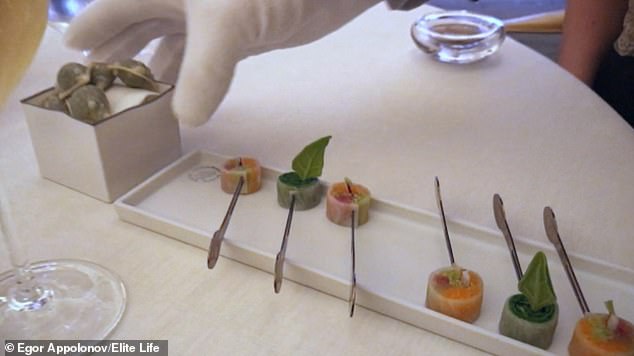 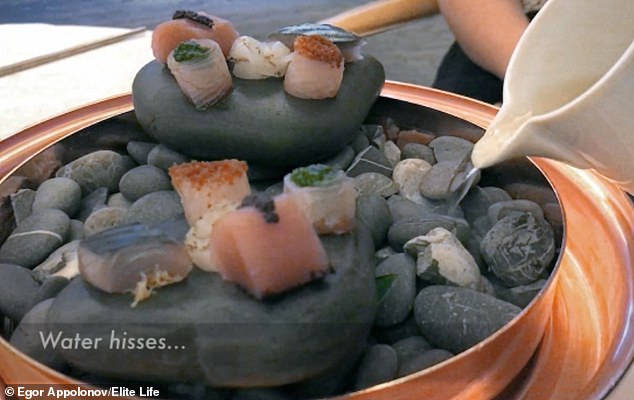 Egor’s footage shows Mediterranean fish being steamed at the table

He told MailOnline Travel: ‘Every single dish at Le Louis XV is a culinary revelation. It’s a culinary drama and you become a participant of this opera.

Are there ever any missteps? Of course not.

‘Nothing ever goes wrong at Alain Ducasse,’ said Egor, a journalist from Russia. ‘Le Louis XV is a symbol of perfection.’

His six-course dinner, which cost 380 euros (£335) per person, plus 150 euros (£130) each for paired wine, lasted around three hours, so Egor’s three-minute video shows a soupcon of the full experience.

But that’s more than enough for Le Louis XV’s capabilities to be seared into the memory. 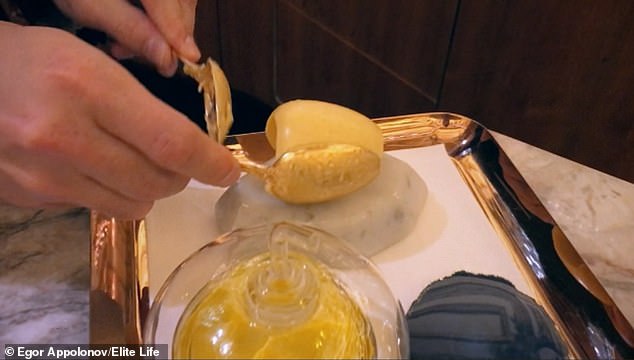 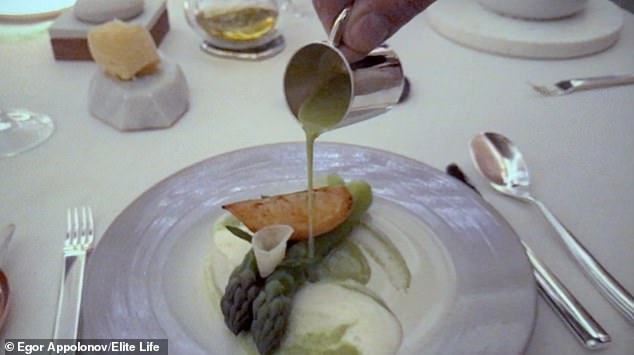 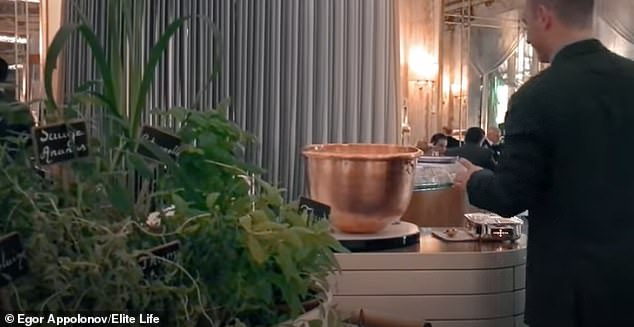 The video begins with a shot of the aforementioned fish, an amuse-bouche, being presented raw on hot stones. A broth is then poured over them and the fish cooks in the vapour under a lid.

Next, we see extra virgin olive oil being poured from a wall-mounted dispenser into a delicate little glass pot, the butter being scooped onto the marble, more pre-starters placed on the table and a personal breadbasket being prepared. 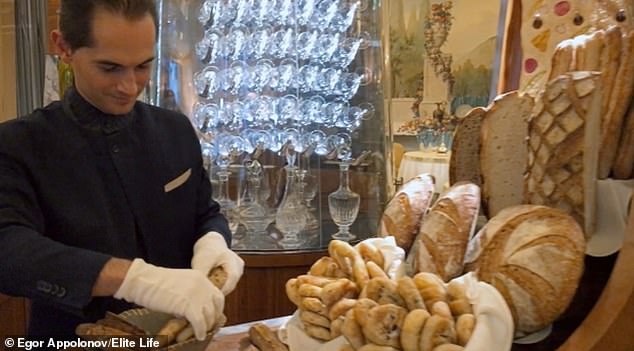 A slice of the good life: A waiter prepares Egor and Anna’s breadbasket 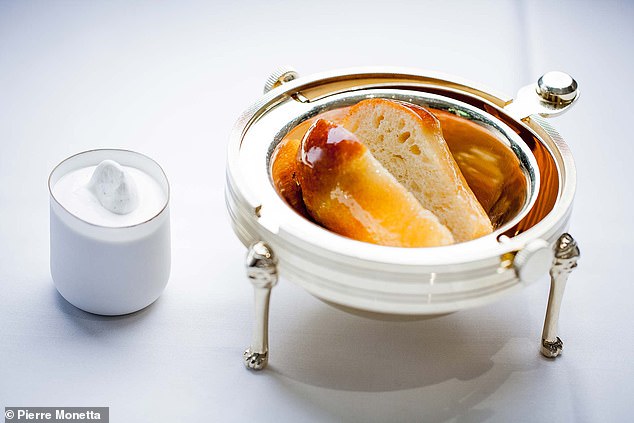 Egor said that the rum baba with Haitian rum, pictured here in a publicity still, was one of the best dishes he’s ever had at Le Louis XV – ‘a huge classic’ 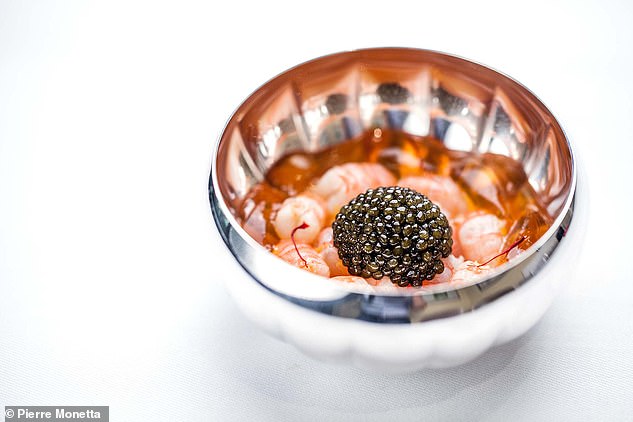 Gamberoni from San Remo in Italy, rockfish gelée and caviar – one of Egor’s favourite Le Louis XV dishes, which he experienced on a visit previous to the one he filmed 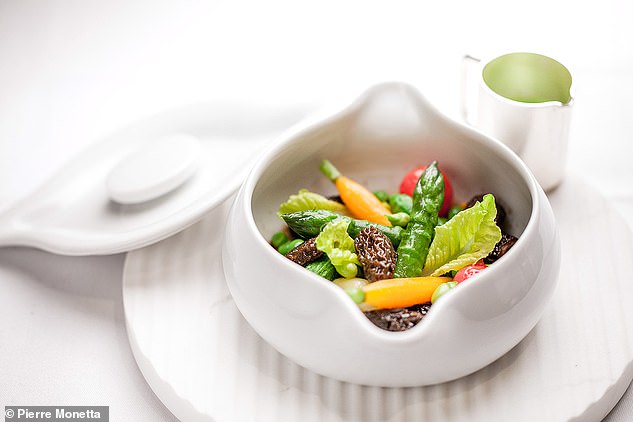 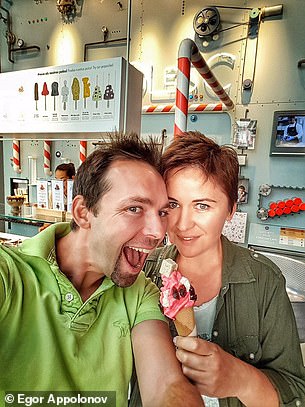 Egor regularly posts videos of his incredible restaurant experiences to the YouTube channel he runs with Anna (pictured here with Egor) – www.youtube.com/elitelife

After the herbal tea trolley disappears Egor films coffee being made in what looks like laboratory equipment as a waiter explains the science.

He said that the rum baba with Haitian rum was one of the best dishes he’s ever had there – ‘a huge classic’ – while his two other favourites were enjoyed on previous visits: gamberoni from San Remo in Italy, rockfish gelée and caviar; and Provence garden vegetables cooked with black truffle.

‘Every menu is a very different seasonal story,’ he added.

Egor regularly posts videos, all made using an iPhone, of his incredible restaurant experiences to the YouTube channel he runs with Anna – Elite Life. It’s the place to go for post-lockdown restaurant bucket list inspiration. Egor has also written a book about the art of writing – ‘a best-seller in Russia’ – and is the editor-in-chief of the ‘Aeroexpress’ magazine for the Russian national airport railway.