Italy’s fab five: The string of colourful clifftop villages that make up Cinque Terre remains one of the world’s most spectacular coastal landscapes – here’s how to enjoy its highlights

Many of us are not even sure how to pronounce it — and yet this is one of the most spectacular coastal landscapes in the world. ‘Chink-way-tear-eh’ is how the Italians do it and I had to repeat it several times before getting it right.

Maybe we’ve all been too seduced by Tuscan villa holidays and side-tracked by the historic honeypots of Rome, Florence and Venice for it to register. But for a slice of perfect Italian authenticity, you should head to this dramatic stretch of coast at the tail-end of the Italian Riviera, tucked away between Genoa and Pisa.

Cinque Terre (translated as The Five Lands) describes the five gelato-coloured fishing villages clinging to a 15-mile stretch of craggy hillside above the Ligurian Sea. 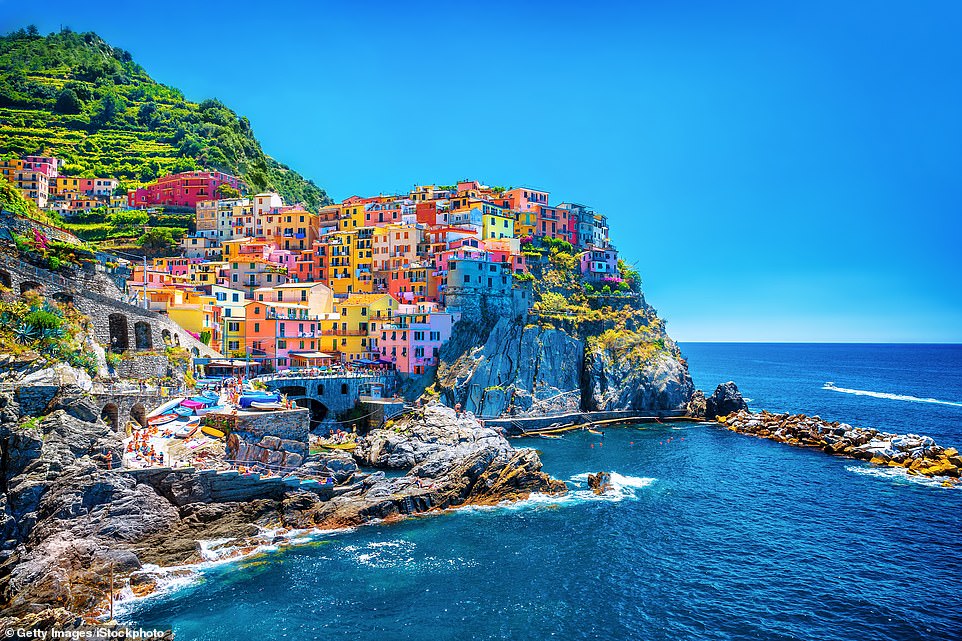 Gelato tones: Fiona McIntosh found that Italy’s Cinque Terre, the dramatic stretch of coast at the tail-end of the Italian Riviera, tucked away between Genoa and Pisa, offers ‘a slice of perfect Italian authenticity’. Above is pretty Manarola, one of Cinque Terre’s five villages

But unlike the Amalfi coast to the south or Portofino to the north, these tiny, shabby 12th-century villages have been preserved within a UNESCO World Heritage site. This means there are no Maseratis screeching around hairpin bends, or Gucci boutiques or five-star hotels. Instead, this car-free zone is an oasis of bucolic Italian life set in untouched, coastal countryside.

Walk into any of the villages (Monterosso, Vernazza, Corniglia, Manarola and Riomaggiore) and you’ll see grandmothers hanging out their washing from windows, schoolchildren playing in the tangle of narrow lanes and farmers carrying crates of grapes, figs, and peaches harvested from the terraces above.

The villages were largely cut off from the rest of the world until the 1870s, when the Italian Unification railway programme connected them to the main Genoa to Rome railway. 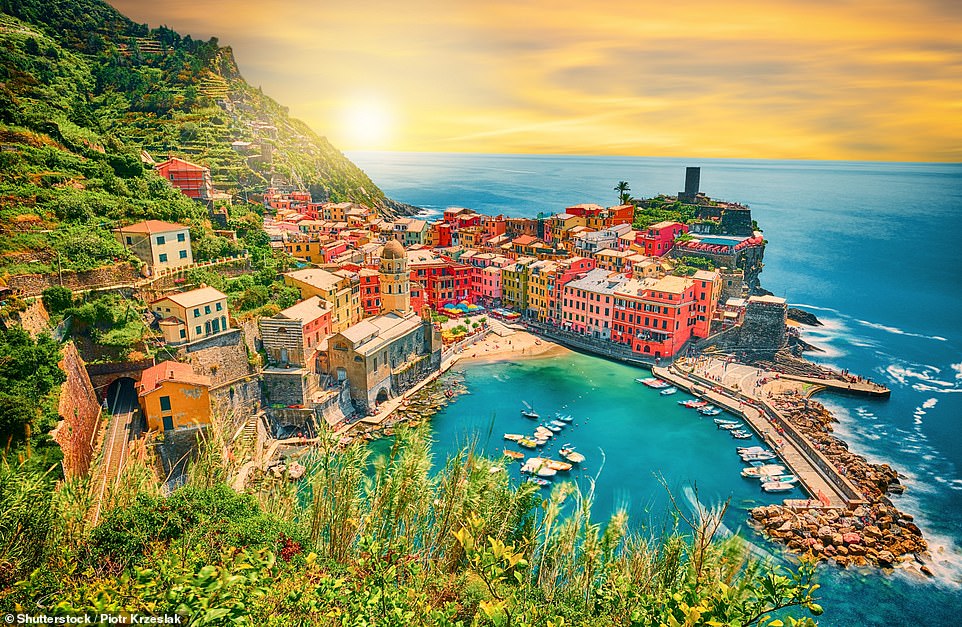 Walk into any of the villages and you’ll see grandmothers hanging out their washing from windows and schoolchildren playing in the tangle of narrow lanes. Above is the village of Vernazza 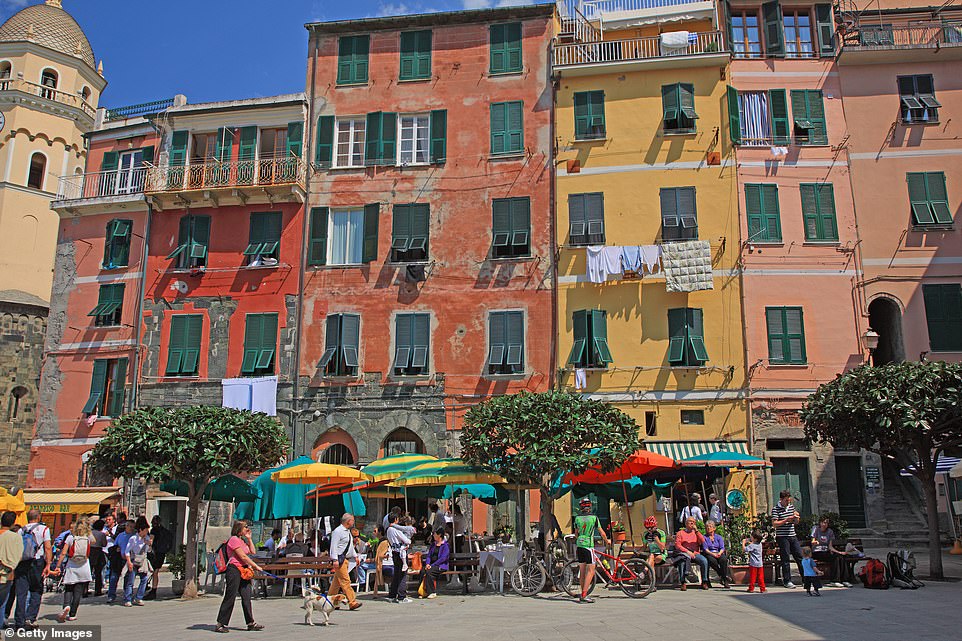 Cinque Terre is high on the bucket list of U.S. tourists, leading to crowds in the summertime, Fiona reveals. ‘Go in early autumn if you can,’ she says. Above are the colourful buildings of Vernazza

Before that, the villagers relied more on fishing and the stone-walled market gardens they carved into the steep hillsides, connected by an intricate circuit of mule trails, which remain today.

But it wasn’t until the 1970s, when American travel writers discovered this string of Mediterranean jewels, that tourism began to take off.

Unfortunately, it hasn’t stopped taking off ever since and the Cinque Terre remains high on the bucket list of U.S. tourists, who pour in each summer from cruise ships docked at nearby La Spezia. So go in early autumn if you can. 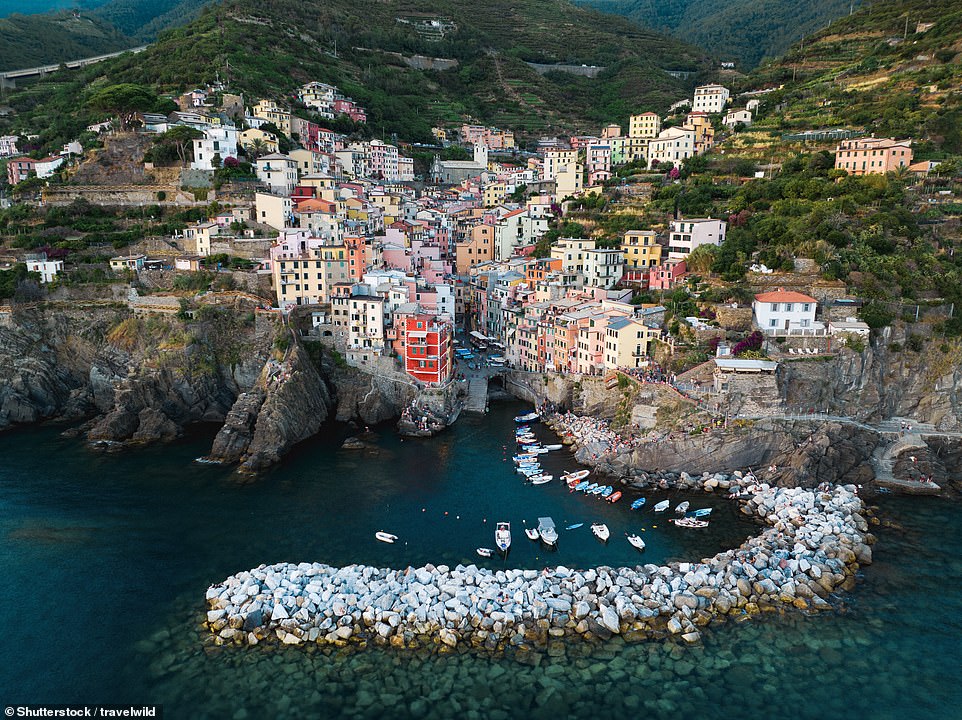 It takes between one and two hours to walk between each of the villages. Above is picturesque Riomaggiore

GOOD TO KNOW ABOUT CINQUE TERRE

The villages are huddled close together and are connected by signposted coastal footpaths and the Cinque Terre Express line. Trains are regular and efficient, skirting the coast and running through hillside tunnels.

This makes it very easy to get around, even with a group of girlfriends who made herding cats look easy.

We based ourselves in a B&B in the largest of the Cinque Terre villages, Monterosso, for four nights. This meant there was no need to lug our bags around (rattling with face creams and far too many shoes).

Each day we managed, miraculously, to spill out of our apartment at 8am, grab an excellent takeaway caffe latte at the train station, jump on a train and later walk a stretch of the Cinque Terre trail before the day trippers arrived.

Walking really is the most wonderful way to see the Cinque Terre as the trails which wind along the coast between each village offer the most spectacular views of the teal-blue sea below.

Our morning walks took us through gnarly vineyards carved into the hillside, past fig trees, wildflowers, juniper, heather and cacti. Along the way we found shrines and grottoes, wooded glens, tiny churches and even a (very welcome) pop-up wine bar selling the deliciously flinty local white wine, Vermentino.

It takes between one and two hours to walk between each of the villages so it’s best to take your time over a three or four-day trip, dipping in and out of the villages at your own pace.

After a solid two-hour morning walk, it was bliss to stop at the next village to wander around the maze of cobbled lanes and eat a breakfast panini and a freshly squeezed orange juice by the harbour.

Then it was off again along the walking trail for a final lunch stop at the following village (Corniglia has the best trattorias) where we greedily loaded up on local specialities of anchovy and pesto pasta.

In the afternoon it was impossible to resist the siren call of the gelateria and sit in the piazza with cioccolata ice cream dripping down our hands. 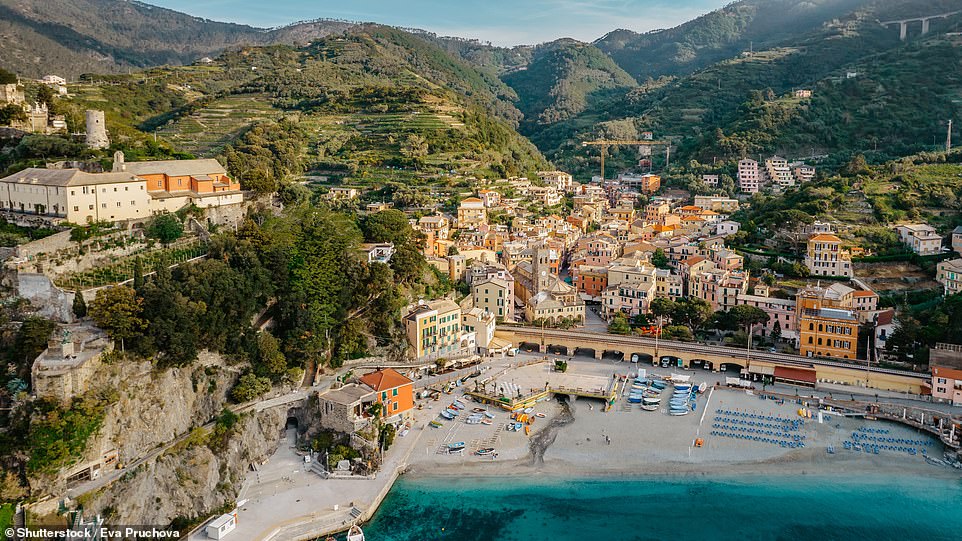 Fiona based herself in a B&B in the largest of the Cinque Terre villages, Monterosso (above), for four nights 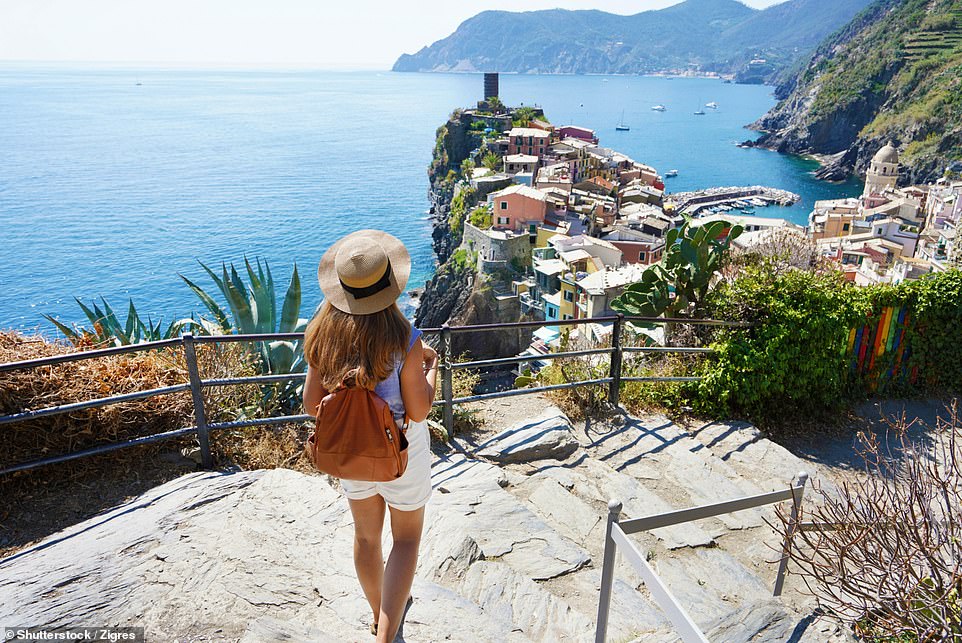 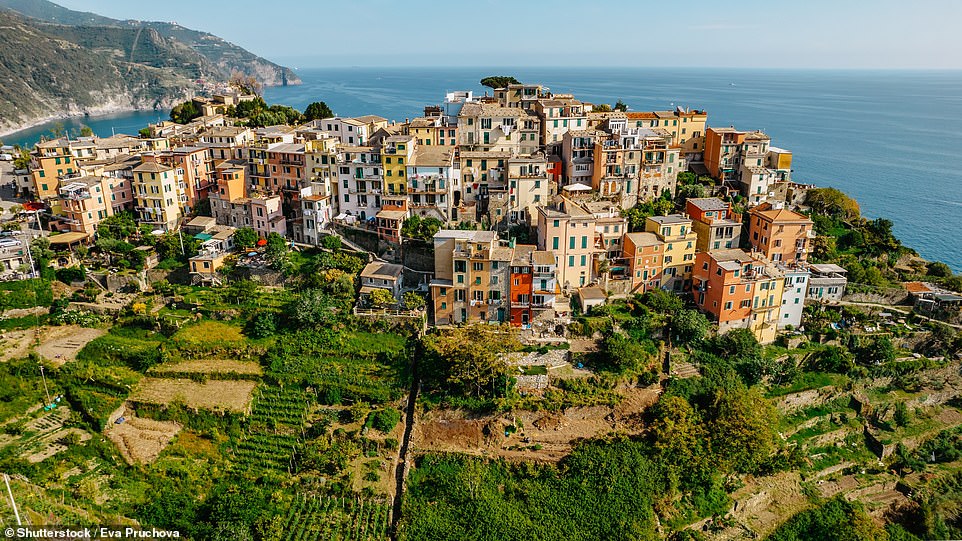 Above is the tiny village of Corniglia, which has ‘the best trattorias’, according to Fiona 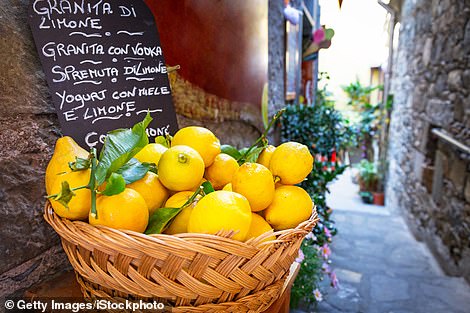 By mid-afternoon when the crowds had built up and the sun beat down, we headed back to our Airbnb for a swim. Each of the villages —apart from tiny Corniglia — has a harbour filled with brightly-painted wooden fishing boats (no super-yachts here) but the only village with a sandy beach is Monterosso. This made it the ideal base for our trip.

Footsore and glowing with exertion and chocolate gelato, each afternoon we took the train back to Monterosso and made a beeline for the small, public beach to cool off in the sea and bask like seals in the sunshine.

Monterosso is also packed to the gunwales with aperitivo bars along the esplanade and restaurants and tavernas in the Old Town.

Every evening we’d plant ourselves at a bar with a glass of Aperol spritz and unashamedly watch the mixed bag of tourists and locals wander past, from Swedish families in shorts and T-shirts, to immaculately coiffured Italian matriarchs tottering in high heels. 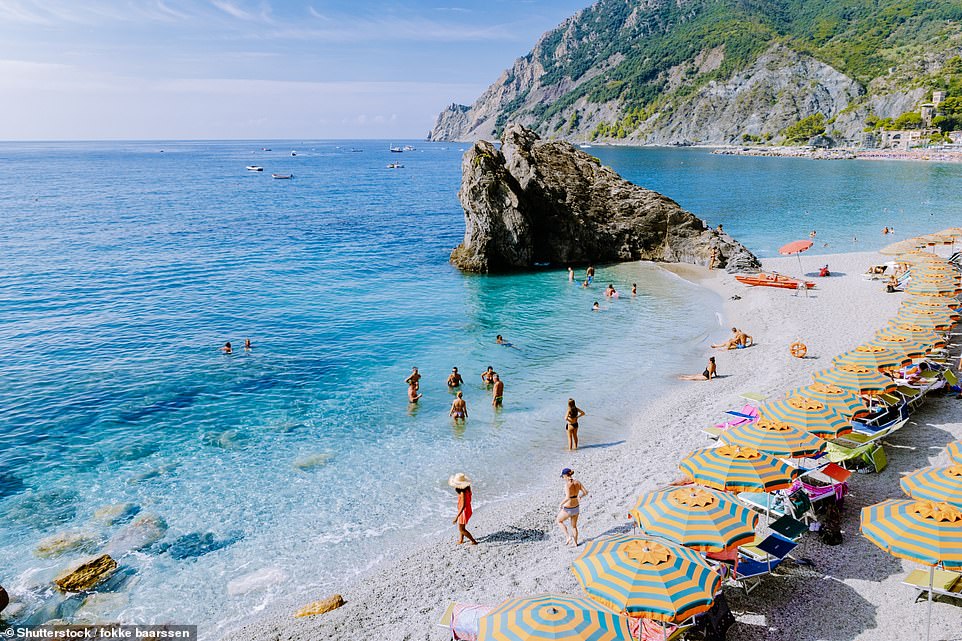 Top spots: Pictured is the sandy beach at Monterosso, where Fiona cooled off in the sea each afternoon 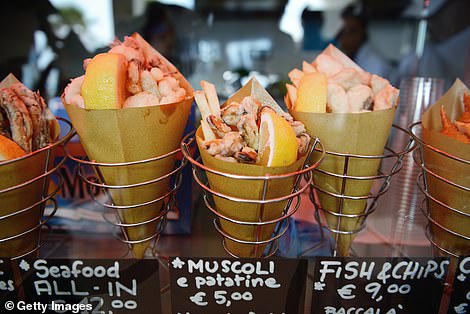 The villages’ harbours nurture a variety of marine life and so the seafood is superb, Fiona reveals

At night, Monterosso had all the hum of a grand Italian town, but in pint-sized form (and with pint-sized prices too, compared to its more glamorous neighbours).

The soul-lifting beauty of the walks, the food, the sea and the paintbox-pretty villages mean it’s about time the Cinque Terre was claimed as a very British Italian holiday destination.

The Cinque Terre is halfway between Genoa and Pisa. Flights to and from Pisa are usually less expensive. British Airways and easyJet fly regularly to Pisa (from £160 return).

In Pisa, take a connecting train from Pisa Airport station to any stop on the Cinque Terre Express line (book on Trainline for the 1 hour 37 min journey, £16).

Arriving in Cinque Terre by sea is also an option. In summer, Golfo Paradiso SNC runs boats to Cinque Terre from Genoa (€25 one-way).

If you book early, you can find a cottage to rent through Airbnb in Riomaggiore, Vernazza, Manarola or Corniglia (from £64 a night). Monterosso, the largest Cinque Terre village, makes a great base with a choice of self-catering apartments (from £80 a night) to hotels (from £111 a night). Or try the stylish La Torretta Lodge (from £370 per night) above Manarola or La Mala in Vernazza (from £150 a night) which has fine sea views. 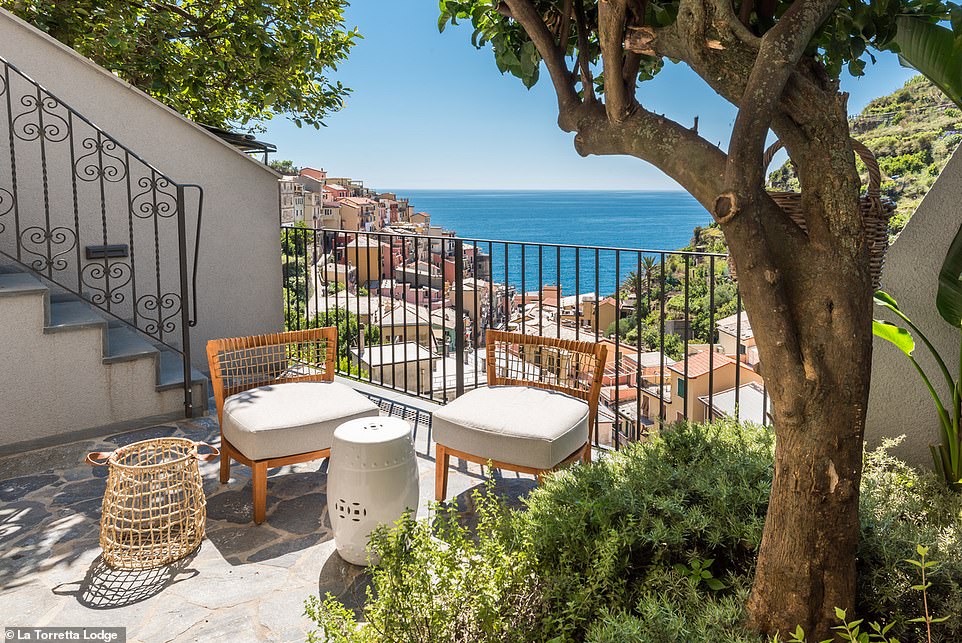 Stay at the stylish La Torretta Lodge above Manarola, where rooms are priced from £370 per night 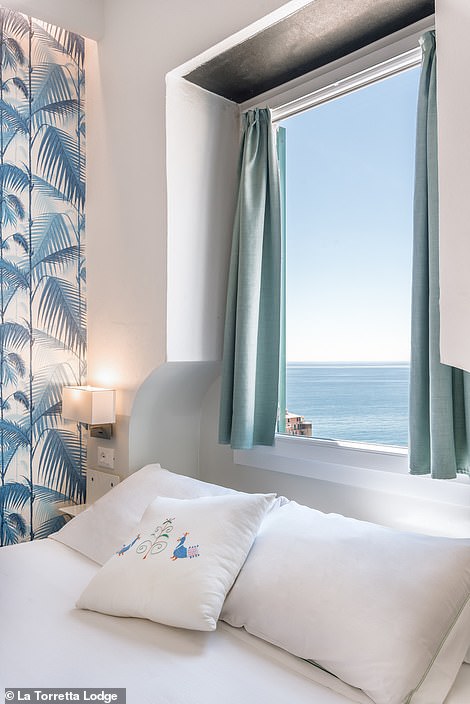 Bright and breezy: A bedroom at La Torretta Lodge

HOW TO GET AROUND

Head to the tourist office (you will find one at the train station in every village) and ask for a Cinque Terre Pass (€8 a day). This allows you access to the main Cinque Terre Blue walking trail and unlimited travel on the train which connects the villages.

A ferry runs regularly from April 1 to November 1, stopping at each of the villages apart from Corniglia (the only one without access from the sea). Full day tickets (€27) can be bought at the harbour ticket offices in each village and you can hop on and off to explore as often as you like.

It’s easier to get a table off-season, but worth booking these hot spots (with excellent food) in advance:

Nessun Dorma: Clinging to the cliffs above Manarola, this sliver of a bar/restaurant has the best views on the Cinque Terre (nessundormacinqueterre.com).

Gastronomia San Martino: A tiny family-run restaurant set on stone steps in the heart of Monterosso Old Town serving the most delicious pasta dishes. No booking, so queue for a seat. 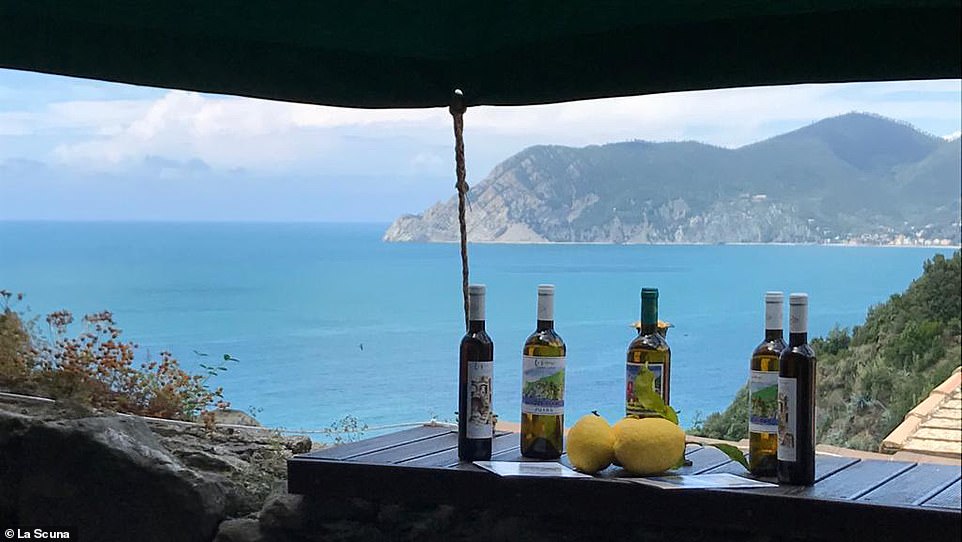 Dine at La Scuna Wine Bar (above), a small bar in Corniglia with a sea-view terrace that serves a simple menu of fresh local food

La Nuova Spezia: Old-school Italian trattoria in La Spezia offering all the Italian favourites with service as warm as a hug (lanuovaspezia.com).