These mesmerising pictures show just how magical and Middle-earth-like England’s woodlands can be.

They are the work of landscape photographer Richard Searle, a music composer who also runs a fledgling photography business, and were mostly taken in his home county, Surrey.

Searle turns his camera on gnarled tree trunks and beds of moss and ferns, often capturing beautiful mist-laden scenes in the Surrey Hills Area of Outstanding Natural Beauty (AONB) and in the oakwoods of Dartmoor, Devon.

He tells MailOnline Travel: ‘It takes persistence for woodlands to give up their secrets, but a real beauty in the detail is revealed once they do.’

How does he capture such spellbinding pictures of Britain’s woods? Searle explains: ‘I spend countless hours wandering around local woodlands, and when I find something that catches my eye, I take a shot with my phone and store the location data.

‘Sometimes I’m lucky enough to just stumble upon a scene at the right time, in good conditions, but that’s a rarity. Usually, it takes repeated visits to the same location before I finally get the conditions I’m hoping for.’ Scroll down to see 15 images from Searle’s wonderful portfolio of work… 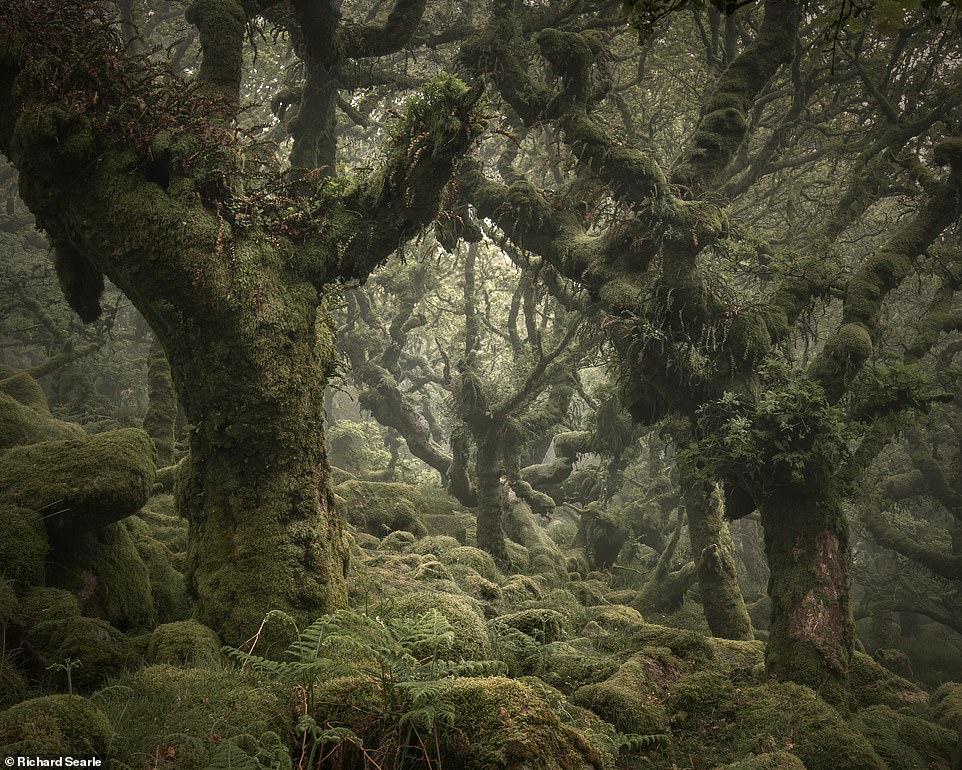 This mystical image, named ‘Portal’, was captured in Wistman’s Wood on Dartmoor. Searle says of the shot: ‘Wistman’s Wood is always a magical place but a bit of mist and gloom certainly adds to the ambience’ 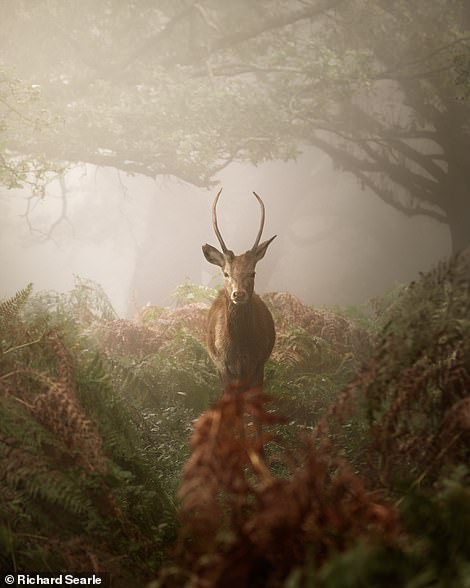 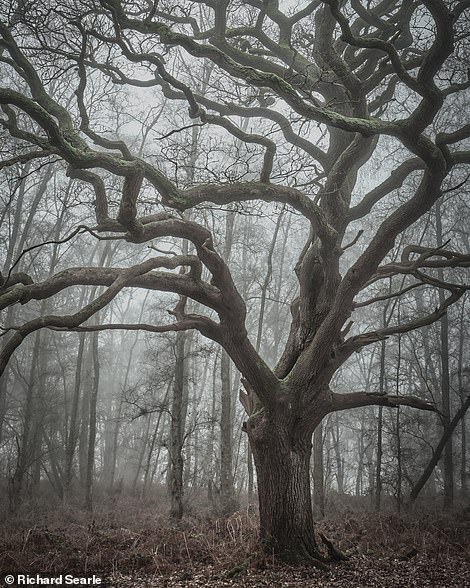 LEFT: This transfixing picture of a deer in Surrey woodland is named ‘Contact’. Searle says: ‘This young chap stood perfectly still for at least 30 seconds, allowing me to get into a good position for this shot. I couldn’t believe my luck.’ RIGHT: Set in the Surrey Hills AONB, this ethereal picture was captured on a ‘bitterly cold morning in March’. Searle says: ‘The best times for woodland photography are at the very beginning or end of the day, when the light is soft and diffused. Blue hour can also be fantastic as the atmosphere in a woodland [that is] lit only by the faintest early morning light can be a truly wonderful thing’ 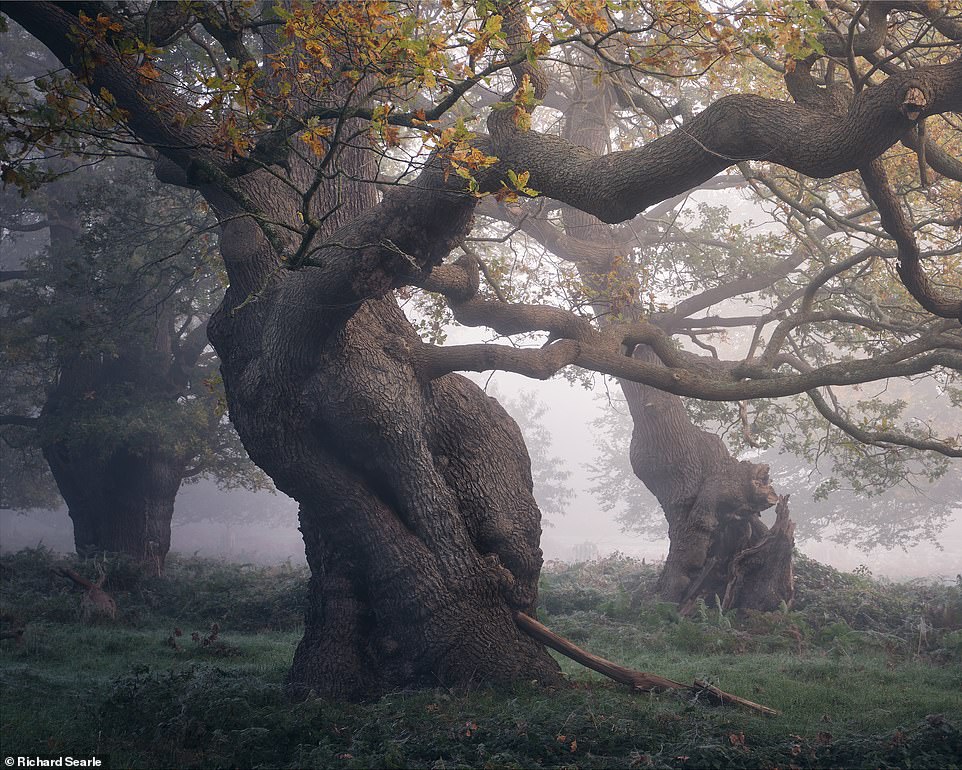 Behold, ‘Twister’, which was captured by Searle in Surrey. He describes the image as a ‘lovely scene of symmetrically leaning twisted oaks’. The photographer notes: ‘The greatest challenge with woodland photography is making sense of what is usually a very chaotic environment. Fog helps as it creates separation between subjects and softens distant details but even so, tiny movements of the camera can make or break an image’ 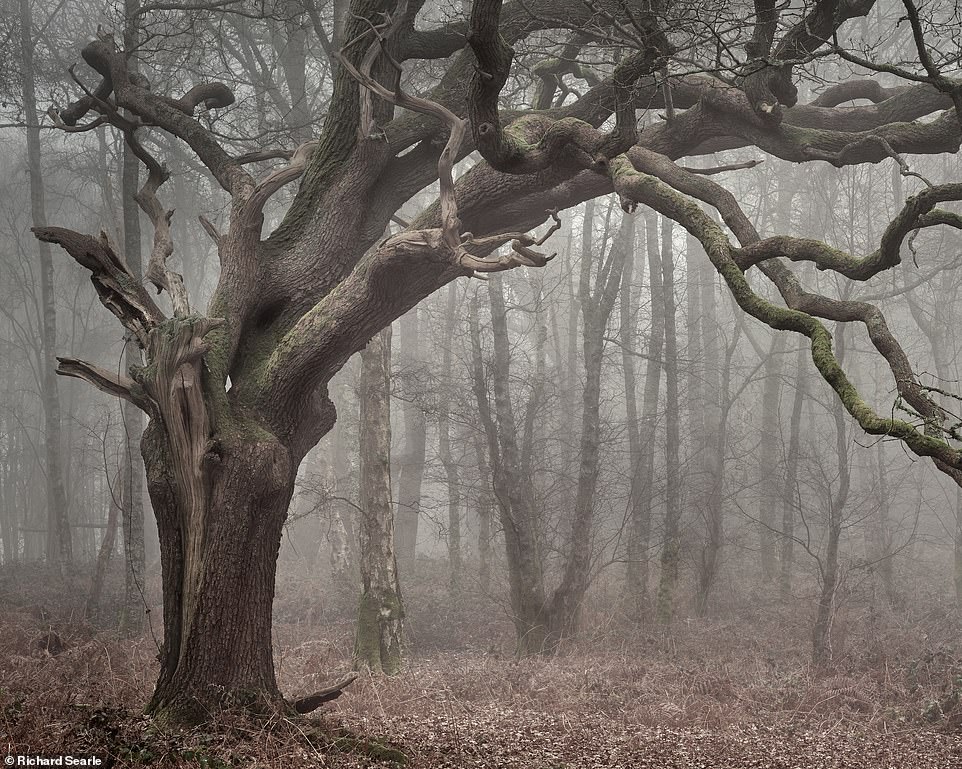 ‘Arc’ is the title of this striking photograph of a tree in the Surrey Hills. The photographer reveals he enjoyed ‘perfect conditions’ when he took the shot one winter morning 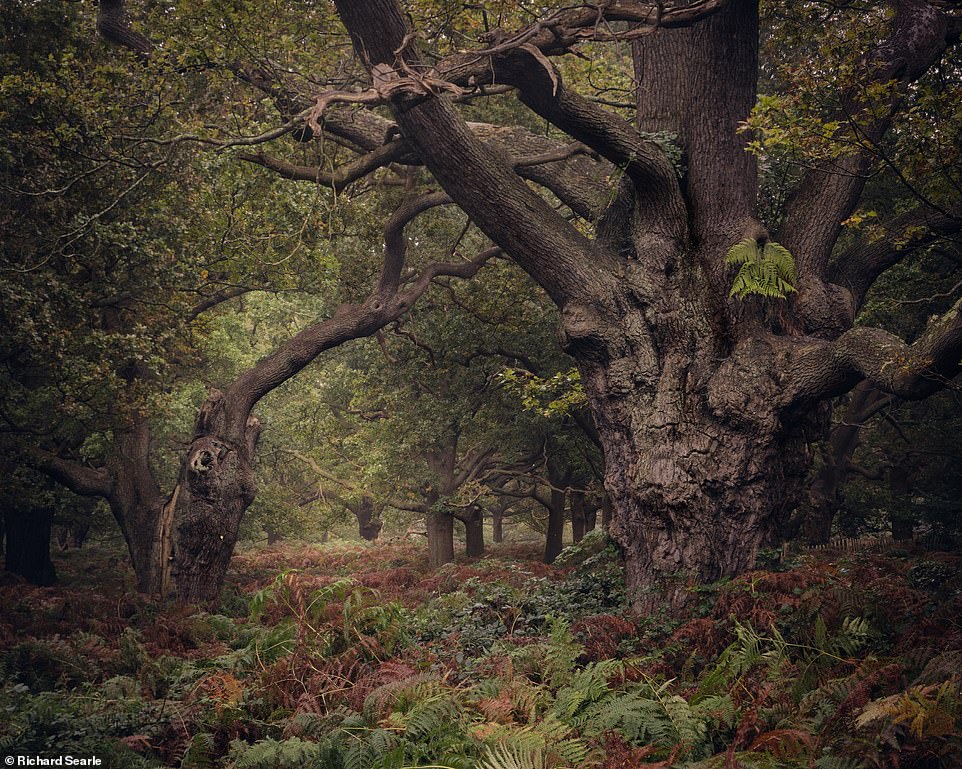 Of this captivating scene captured in Surrey, Searle recalls: ‘The light breaking through the canopy in the distance, framed by the two old oaks, was enough to catch my eye.’ Speaking generally about his portfolio of landscape photography, he adds: ‘These photographs are about relationships between shapes, colour, texture and contrast and everything that is in the frame needs to be considered’ 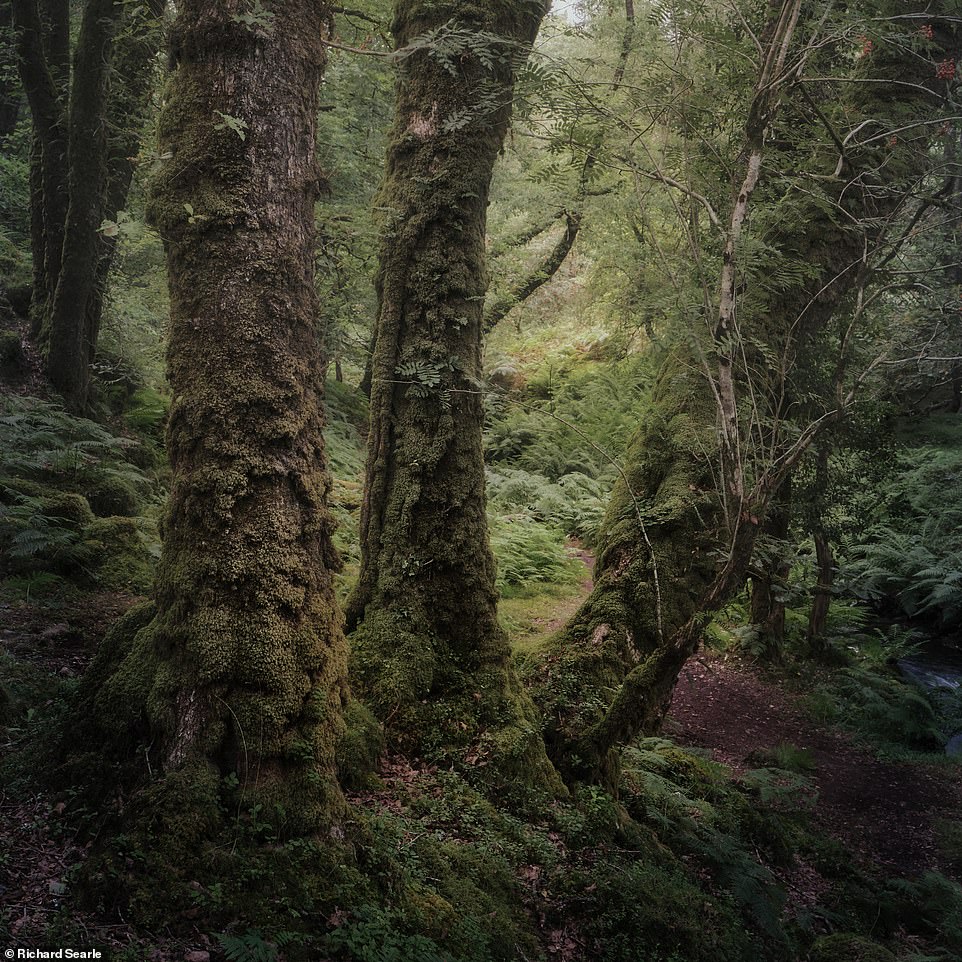 Dartmoor is the setting for this beautiful image, which Searle titled ‘Relict’. He says that the picture shows ‘summer sunlight breaching the dense canopy, the soft glow of the moss, clinging to the oak trunks and a delicate Rowan tree, clinging on for survival, nestled amongst its mighty companions’. The photographer adds: ‘It’s a shame that the Rowan wasn’t resplendent with berries – just a few in the top right corner – but [it’s] hardly surprising, considering how little light penetrates through’ 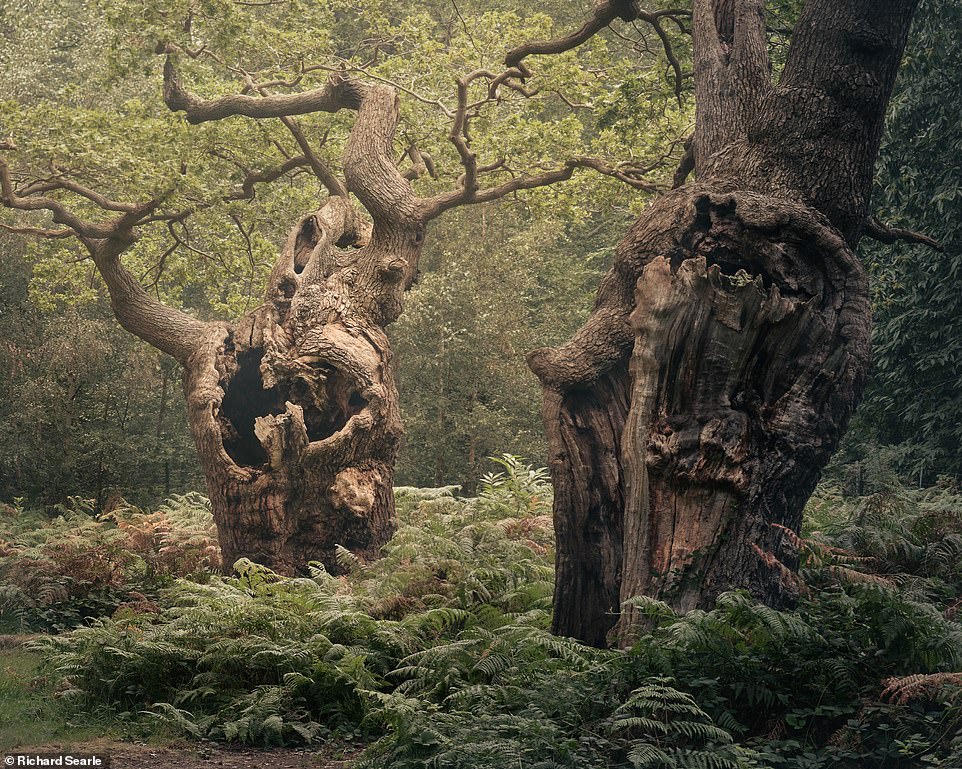 Searle notes that the two trees in this marvellous picture, taken in Surrey, ‘are bathed in soft, early morning light, with the faintest touch of mist still hanging in the trees beyond’ 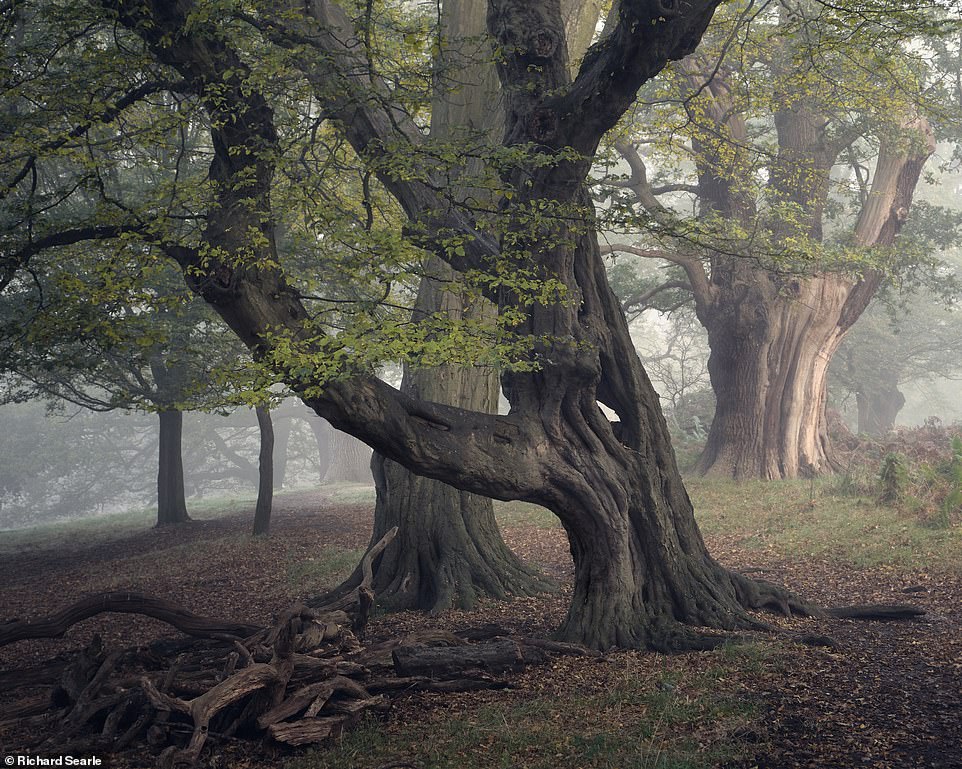 Cast your eye above and you’ll see Searle’s current favourite photograph, titled ‘Congregation’. He says: ‘My favourite image often changes. I think it’s only natural to cast a critical eye over your previous work and I often look back on things and see what could have been done better. It’s often a more recent image that is my current favourite, as is the case now.’ Describing the story behind the photograph, which was taken in Surrey, Searle says: ‘It was captured a few weeks ago in a local park and although it is a composition I scouted some time ago, I had to wait for just the right weather conditions for it to work’ 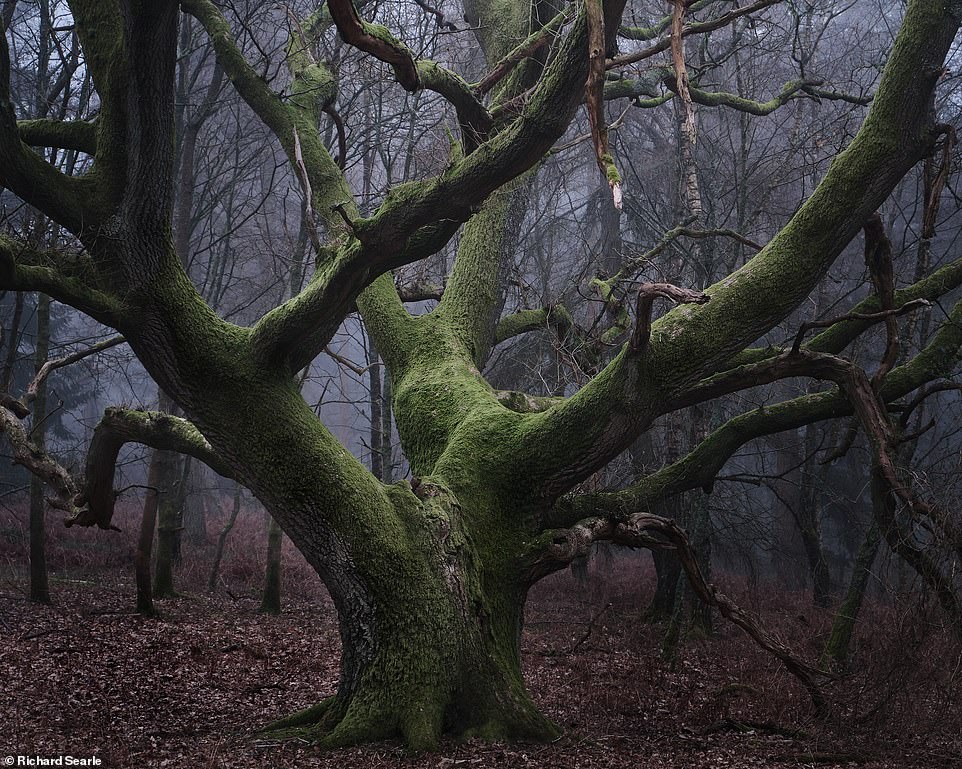 Searle took advantage of the ‘beautiful, foggy conditions’ in the Surrey Hills AONB when he captured this shot, titled ‘Sprawl’. He muses: ‘I was drawn to the way the light was catching the moss, creating the luminous glow’ 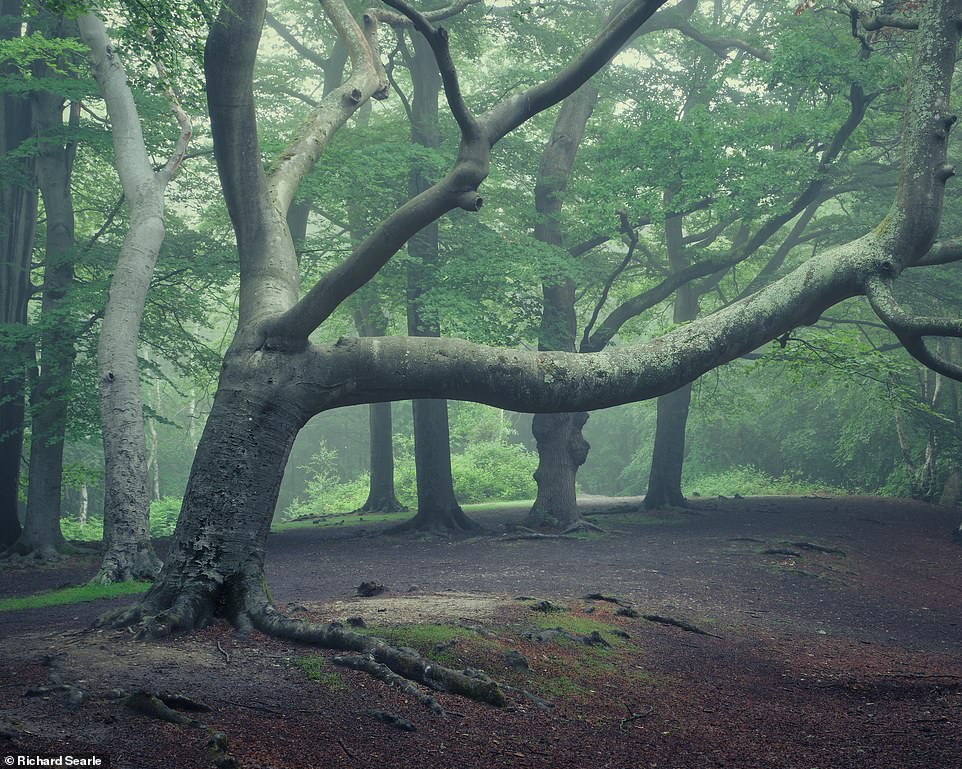 This atmospheric shot, snared in Surrey, is titled ‘Evergreen’. Searle muses: ‘There’s something captivating about the ever-modulating nature of woodland. As seasons change or simply [go] through different weather conditions, different relationships between the trees reveal themselves. You can visit the same place over and over and it’s never quite the same’ 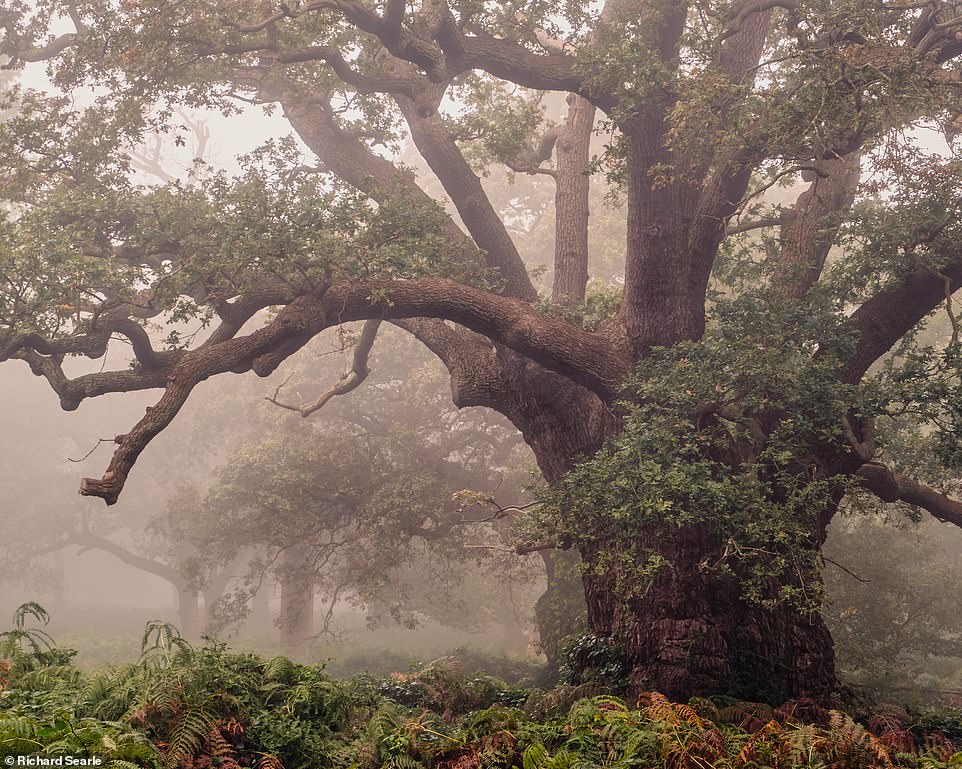 Searle says that he captured this Surrey woodland scene ‘in all its foggy splendour’. He explains: ‘I love to shoot locally, where possible. Getting out into the mountains is always a great experience, but shooting locally allows me to really get to know an area well, which leads to more photographic opportunities’ 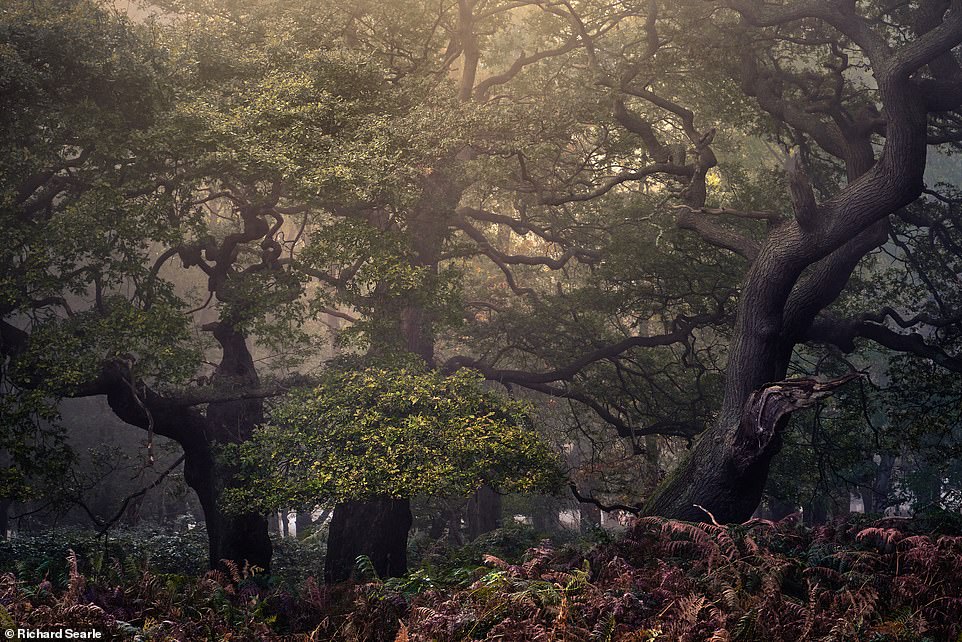 Another enchanting forest scene in Surrey, titled ‘Golden Bower’. Searle says: ‘I spotted this [scene] whilst walking back to the car after a shoot and although I’d noticed these trees and their intricate shapes many times before, it was the light that caught my eye this time’ Here, you’ll see a stunning photograph of what Searle describes as ‘an impressive looking old beech tree’ in the Surrey Hills area. The photographer reveals that the tree was ‘buried deep within a local plantation, kept company by a few old friends’. He says that the scene is ‘a relic of a time gone by before the area was re-forested for quick-growing timber production’ 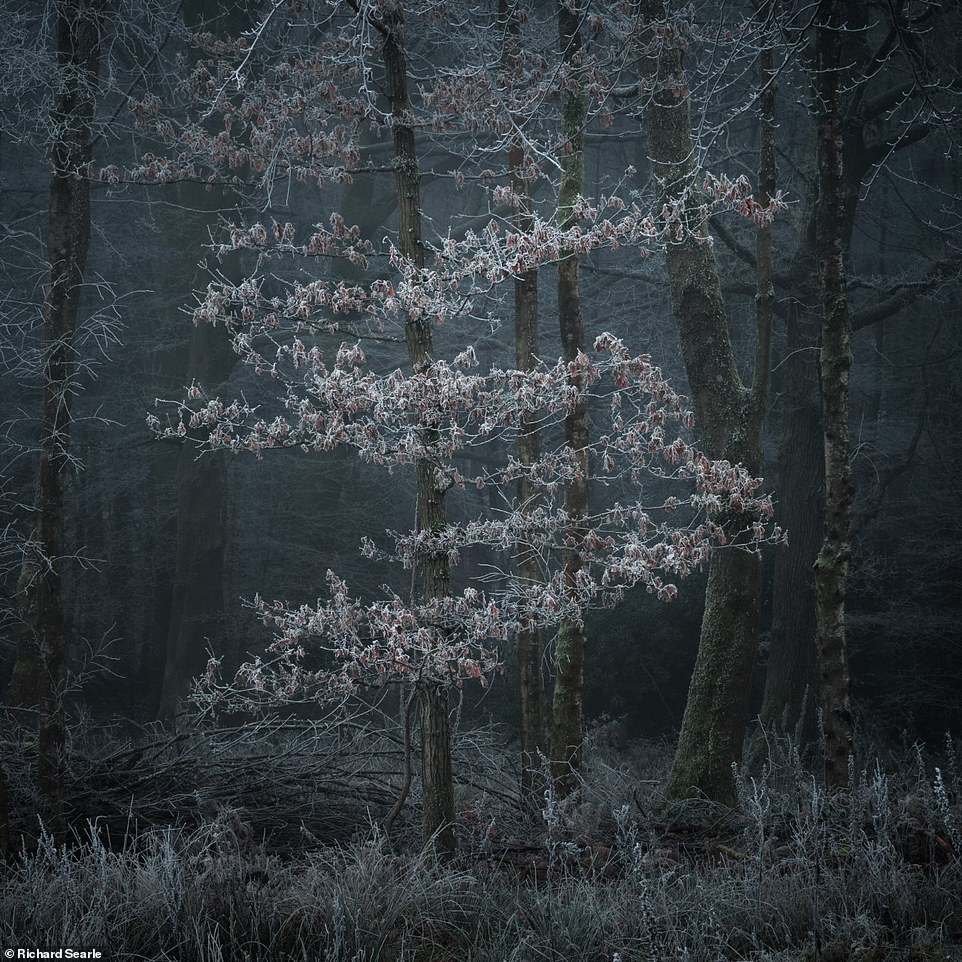 Above is ‘S-Curve’, which was commended in the ‘Your View’ category of this year’s Landscape Photographer of the Year (LPOTY) awards. The image, taken in Surrey, is part of the LPOTY exhibition, which is on show at London Bridge station until January 9, 2022. For more information about Searle’s work, visit his website or his Instagram page