Has fear of coronavirus emptied the beaches – or have I chanced upon one of the last unspoiled stretches of coastline in Italy? I am on the sand at Santa Maria del Focallo in southern Sicily. Around me, a few clusters of friends and families are huddled under umbrellas or cooling off in the sea. Dunes coloured green and pink by evergreen shrubs and bougainvillea stretch in both directions: west towards the port town of Pozzallo and east towards Portopalo, Sicily’s most southerly tip, where the Ionian Sea meets the Mediterranean. There’s an end-of-season feel, as if the stragglers are soaking up the final rays of summer. In reality, the season has only just begun.

On 4 June, the travel ban between regions in Italy was lifted and beach resorts began reopening, relying heavily on holidaymakers from their own region and hoping to make ends meet despite the new mask-wearing, socially distanced normal. In this particular corner of Sicily, however, finding space to sunbathe at a safe distance has evidently never been an issue. It has endless kilometres of beach free from the privately run lidos that clutter most Italian resorts, with their tightly packed, uniform rows of sunbeds and parasols. 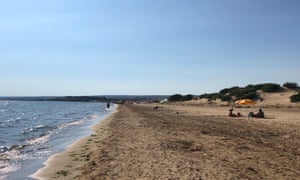 “It’s always like this,” says Ettore Lorenzi, a kitesurfing instructor, from the porch of his whitewashed wooden shack overlooking the beach.

East Sicily: what to see plus the best bars, beaches, restaurants and hotels

Ettore runs the Floripa Yoga and Kitesurf House (doubles from €70) alongside yoga teacher Ameriga Giannone. Just over the road from the beach, it’s a modernist, low-key space, with bold-coloured walls and a lush garden. The vibe is more like a stay with friends than a hotel holiday. I’m barely been there five minutes before Ettore puts a tumbler of red wine in my hand and invites me to join the other guests – either old Sicilian friends or repeat visitors – at a long table on the jasmine-shaded terrazzo for a vegetarian dinner. I quickly realise I could happily spend the week flitting between the beach and the grounds of Floripa. 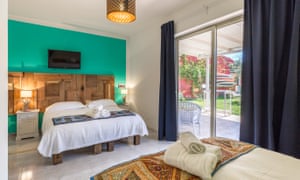 But I have a large unspoiled region to explore and a long list of “unmissable” places to eat at along the coast. Gennaro del Pino, a not terribly busy beach barman, tells me: “Though excellent cooking can be found almost anywhere nearby, A Valata, on the seafront in Pozzallo, 8km away, is where pozzallesi locals choose to dine.” And so off I go.

Unlike the beach, A Valata is rammed. Part-suspended on wooden decking, the restaurant hangs over now-obsolete concrete tracks that used to guide boats into the water. “The kitchen was formerly a boathouse,” the restaurant’s owner says. “It was one man’s job to row out across the bay to the lighthouse to top up the lamps with oil each night.” Now succulent platters of house speciality pesce crudo – Sicily’s answer to sashimi – fly out of the former boathouse kitchen. Michael La Pira, who works as a waiter in summer and in the merchant navy in winter, says the fish is brought in daily on small boats that have been the bedrock of this local economy for centuries. 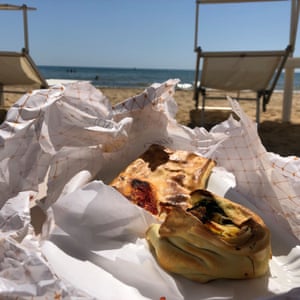 On the table next to me, a young woman finishes a huge portion of linguine with fresh tomatoes and sardines. “Tourism is surplus to fishing and agriculture here,” says Erika Modica, whose choice of dish reflects the two pillars of the area’s economy. Erika runs a boat chartering business, and appears unfazed by the impact of coronavirus. “We live very much in the present here,” she says. “We are happy people.”

Indeed, as I walk back through the town to the car, a heady atmosphere prevails as locals pack the boardwalk enjoying their evening passeggiata. The only sign of a pandemic is the odd mask slung over an elbow, to be worn when entering a bar or shop. Holidays are still happening here, just without the influx of foreign tourists. 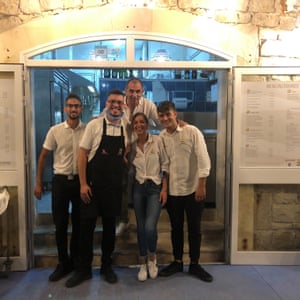 In the opposite direction to Pozzallo, east along dusty roads flanked by polytunnels growing Pachino tomatoes, is Portopalo di Capo Passero. Once the centre of the tuna trade, and now on the verge of being run-down, it feels real, compared with touristy Marzamemi further up the coast. Not far away, off Italy’s southernmost tip, Isola delle Correnti is a tiny island just above sea level, with a 200-year-old octagonal stone lighthouse. It’s an ideal swimming spot, and groups of friends clutching lilos are wading out through the shallow water to swim in the small coves.

Staying on shore and in the shade, I chat to a family on holiday from Emilia-Romagna, the first non-Sicilians I come across during my stay. “We were lucky to have booked our flights in January because now they are expensive,” says Sabrina Corbino, as she tucks into scaccia – a traditional layered pizza-pie filled with tomatoes and aubergine. She blames the airlines for the lack of tourists – including Italians – though she admits she already knew the area through having family here. 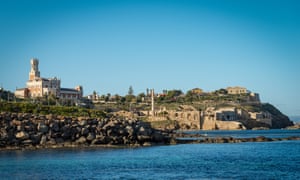 Inland, the hilltop towns built in Sicilian baroque style offer a side helping of sophistication. I enjoy an aperitivo in the chic town of Noto, but nearby Modica and Scicli are equally beguiling. Noto’s architecture is high baroque, and the pale stone reflects the sun in ever-changing pink hues on the wide cobbled streets. In Cássaro Cafè-Bistrot on the main drag, two friends have a drink at the table next to mine. They are a fashion PR and a stylist who moved from Milan several years ago to transform an 18th-century apartment into a B&B. “This is the type of place where you could be standing next to a famous film director in the queue for an ice-cream and no one would even realise,” says Edoardo Marchiori as he sips his margarita. “Those in the know come here to get away from the crowds.”

Back at Floripa, the other guests are baffled by my decision to skip the daily yoga classes, but with such a seductive and unpretentious corner of Sicily on the doorstep, yoga is going to have to wait.