Voyages to tickle your taste buds! Eat and drink your way along Europe’s waterways on a foodie river cruise, stopping off for cookery classes, crisp wines and currywurst

Food and cruising go together like oysters and champagne. So it’s no surprise that many cruise lines offer taste-bud tingling itineraries along Europe’s waterways.

It’s a win-win scenario. The countryside rolls past as you stretch out with a glass of something crisp and chilled (rather than cursing the satnav as you sail past your exit on the autobahn). An itinerary curated to within a lick of its well-seasoned life means you always get to eat at the best places or sneak onto the secret tour.

Can’t decide whether to go to Vienna, Budapest or Amsterdam? No need — enjoy a clutch of city breaks without the faff of having to pack and unpack — your bedroom goes with you, like a well-behaved dog. The Danube and the Rhine are the two megaliths of short-haul foodie river cruising, but there are plenty of others… 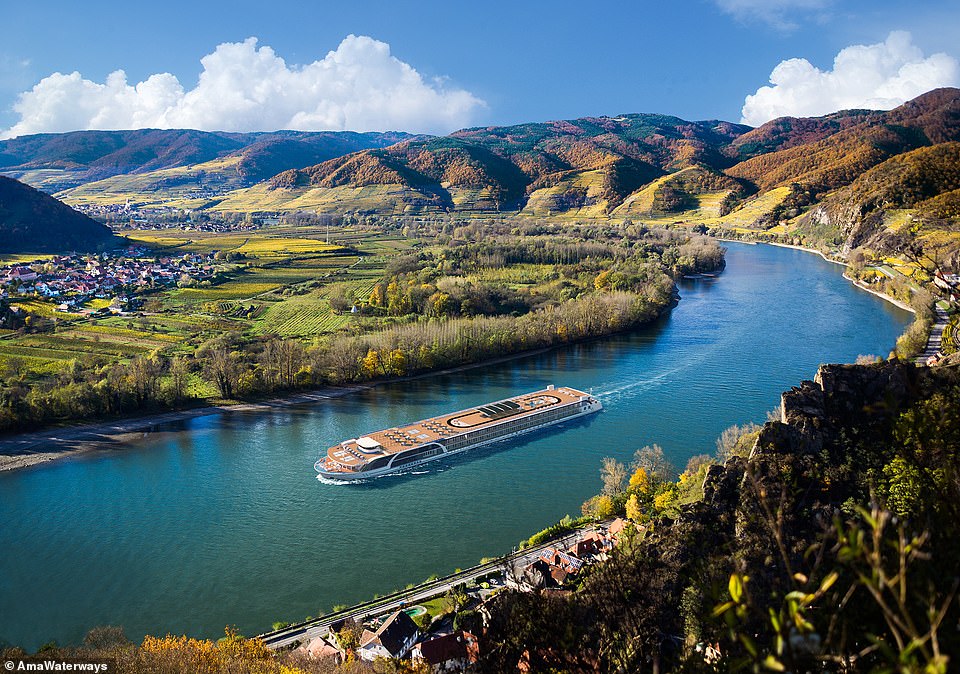 Majestic: The new river cruise ship AmaMagna will stop off at 14 countries over an epic 45 nights

It’s the ultimate European river trip — seven rivers, three ships (including the new AmaMagna, a diesel-electric hybrid ship) and 14 countries over an epic 45 nights. Along the way, you’ll navigate the Rhone and Rhine, Main and Moselle, down to the Danube.

This isn’t launching until 2023 but there are options available.

Book it: Forty-five nights with AmaWaterways from around £18,000 pp (amawaterways.com). 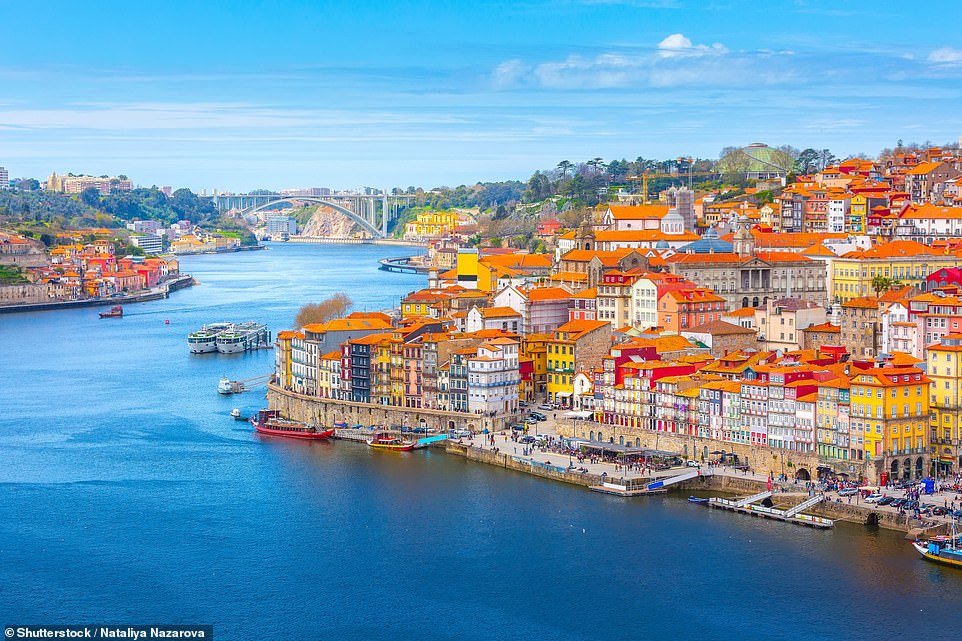 Explore laid-back Porto (pictured on the right) before you meander up the Douro, Portugal’s hot new river cruise destination

Portugal’s Douro is the hot new river cruise destination. Allow time to explore laid-back Porto before you meander up the Douro.

Wine terraces ribbon the hills and terracotta-tiled villages slumber on the banks. This is port central and tastings take place at various quintas along the way.

Walks are leisurely affairs, rewarded by picnics in the hills. The pace picks up (marginally) at medieval Salamanca, Spain. Still hungry after exploring the city? Sniff out hornazo (meat pie) or paloma (fried salad sandwich — strangely delicious) at the market. Obrigado!

Book it: Seven nights with Viking from £2,045 pp (vikingrivercruises.co.uk). 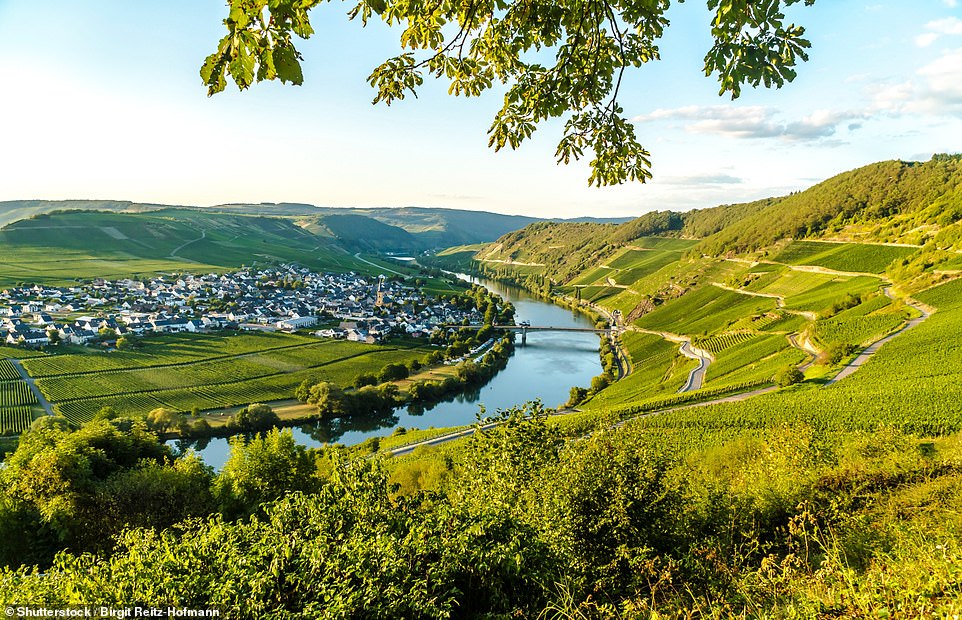 Germany’s Moselle valley, pictured above, is synonymous with crisp floral white wines, which you can sample on a cruise along the Moselle river

The Romans planted vines along Germany’s Moselle river in the 1st century and the Germans took up the baton and ran with it. Now the Moselle valley is synonymous with crisp floral white wines (cheers pinot gris, bottoms up riesling).

Vineyards slope down to the river and are pretty enough before being topped by fairy-tale castles poking out of the early-morning mist. Raise a glass to the Romans at Trier, Germany’s oldest city, with Unesco sites including an amphitheatre. In vino veritas. 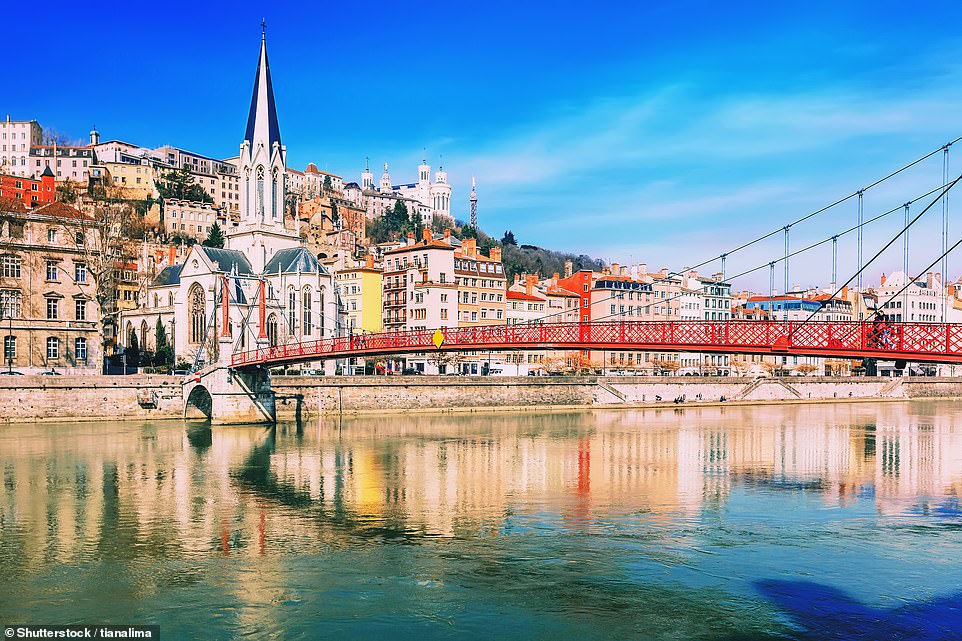 Cruise through one of the great foodie regions of the world with Emerald Cruises – stopping off at Lyon, pictured, along the way

Emerald Cruises boast that every last bite served on board is inspired by the local region.

Given you’re cruising through one of the great foodie regions of the world (Lyon is the gastronomic capital of a country famed for its gastronomy) that’s good news. Even better is that Fabien Morreale, finalist of France’s Top Chef TV show, is in charge of your Provencal dinner extravaganza.

In case you’re snackish between meals, there are tastings on board (cheese, olives, regional wines) and guided tours of history-drenched cities along the way.

Book it: Seven nights with Emerald Cruises from £1,895 pp (emeraldcruises.co.uk).

WINE ON THE RHINE 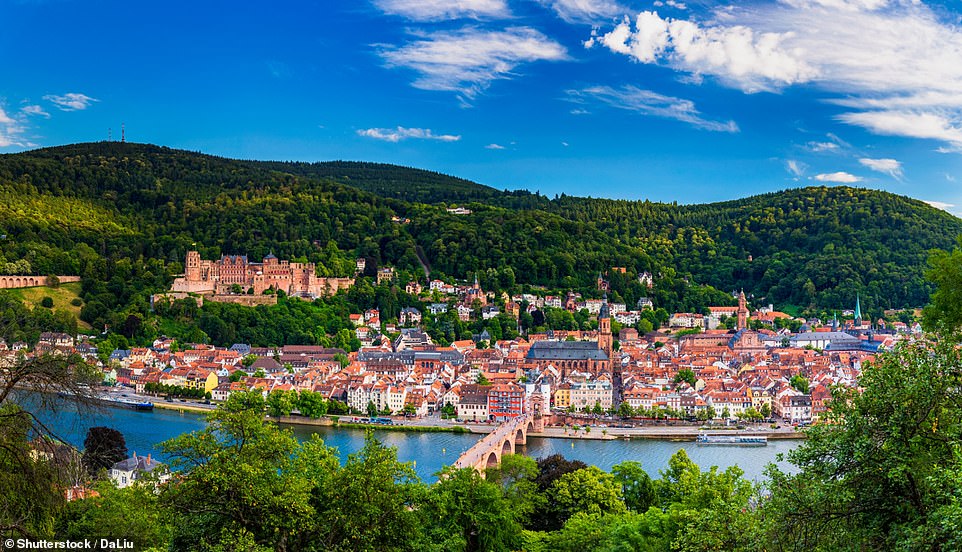 Tauck offers a nine-night package that includes a trip to Heidelberg, pictured, where guests get the chance to learn how beer pairs with food

You go pint to pint on this beer trip that takes in the Netherlands, France, Switzerland and Germany and culminates in Munich for the massive booze-up that is Oktoberfest (with a guaranteed seat at one of the best tents).

Limber up along the way with a tour of Amsterdam’s coolest bars and a gentle stumble down ‘Germany’s longest bar’ in Dusseldorf (home of altbier — a crisp ale-lager hybrid). It’s not all mindless glugging — at Heidelberg you learn how beer pairs (some say better than wine) with food. 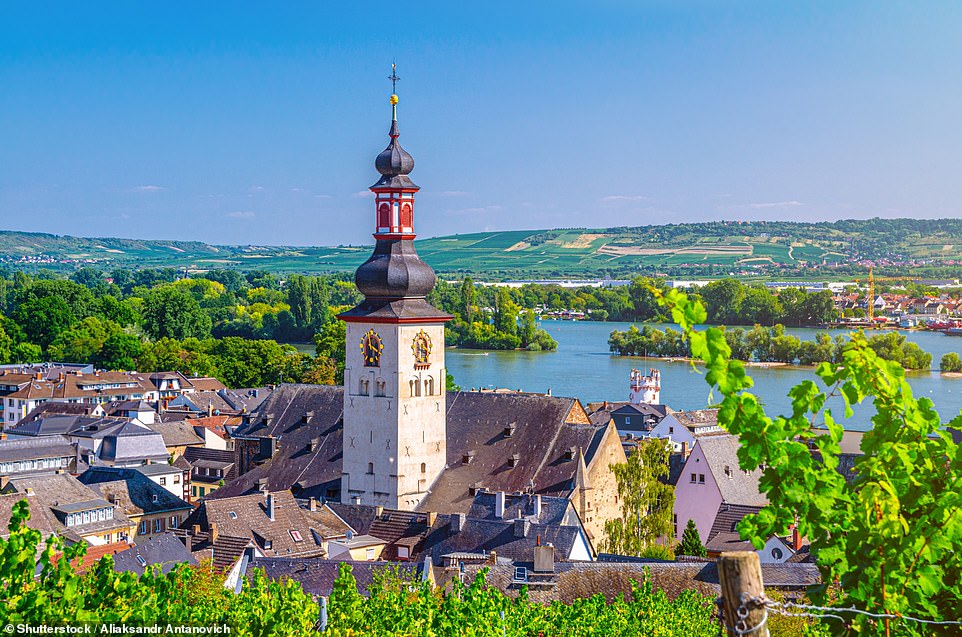 Saga’s new river ship, Spirit of the Danube, launches next year with a variety of cruises for over 50s. Foodies will lick their lips at this culinary epic that crosses the Netherlands, Germany, Austria, Slovakia and Hungary and includes wine tastings in Rudesheim and beer tours in Bratislava.

If you catch the cruise departing April 4 next year, you’ll find celebrity chef Paul Rankin on board, founder of Michelin-starred Roscoff in Northern Ireland and star of Ready Steady Cook. 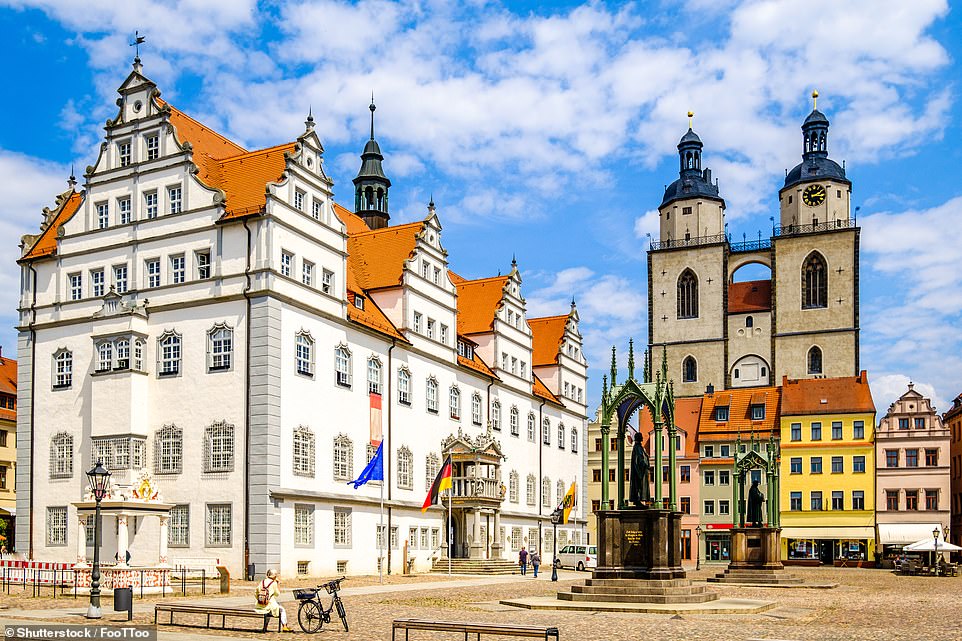 Christmas markets are the focus as you cruise down Germany’s Elbe. Sausages (bratwurst, currywurst, everythingwurst) and lebkuchen are givens, but also check out kartoffelpuffer (potato pancakes) and flammkuchen (Germany’s pizza). Of course there’s gluhwein but also sip eierpunsch made from egg liqueur (it’s gorgeous). Start at Berlin and work your way through Magdeburg, Wittenberg and Meissen.

Book it: Six nights with Croisi Europe from £1,187 pp (croisieurope.co.uk). 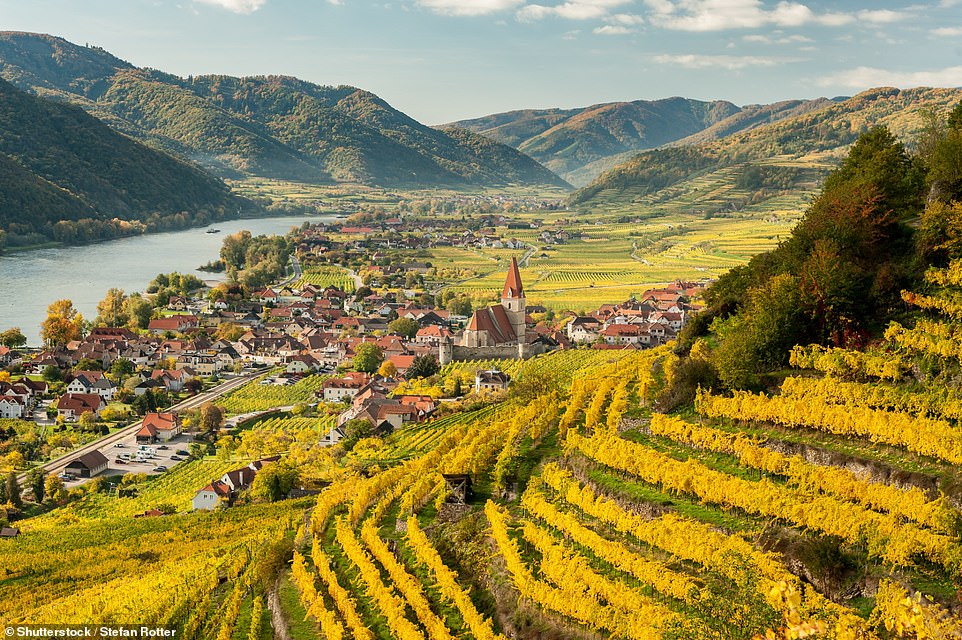 Hop in a helicopter to fly over Wachau Valley, pictured, while taking part in Crystal Cruises’ voyage around Austria and Hungary

This luxury cruise takes in Austria and Hungary and tucks all the crisp corners, with butler service for every suite, a Viennese-inspired cafe, and fine-wine pairing at silver-service. The Vintage Room Excursions are mainly bespoke affairs.

Hop in a helicopter to fly over Wachau Valley and don’t miss Cesky Krumlov for dark lager from Pivovar Eggenberg or ancient Krems for amazing chocolate.

Book it: Seven nights with Crystal Cruises from £3,405 pp (crystalcruises.co.uk). 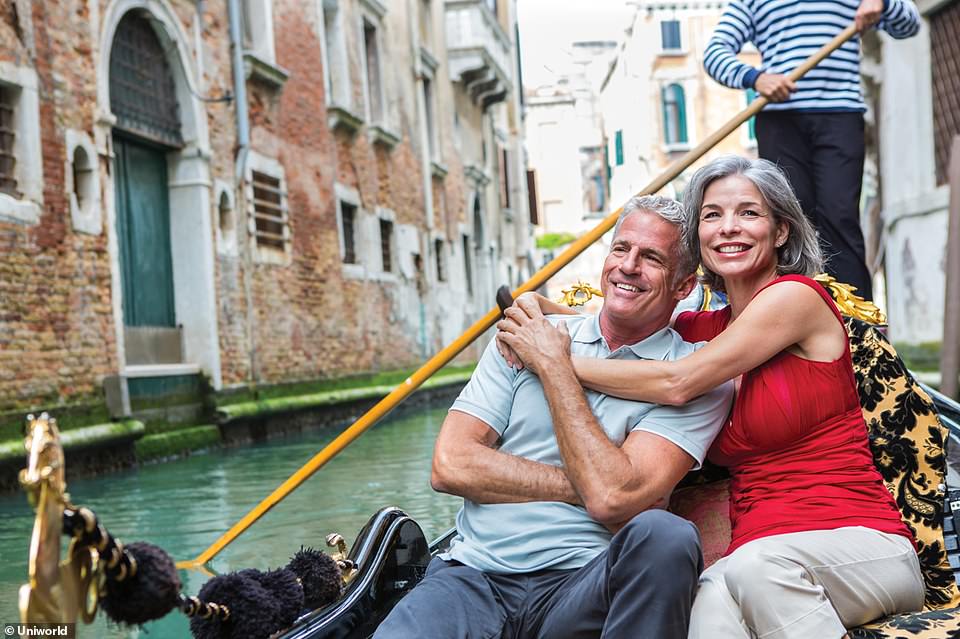 Yes, you start off in sophisticated Milan, but the star of this show is the River Po and its cities. Venice needs no introduction but it’s nice to be ushered into St Mark’s and the Doge’s Palace without crowds.

Bologna is seen as Italy’s culinary capital and you get to make pasta and Bolognese sauce. After all this, Padua has a tough job but it holds its own — come 3pm, it’s rude not to be sipping a spritz and eating cicchetti (Paduan tapas).