A cynical friend dismissed Cornwall’s latest ‘glampsite’ and back-to-nature retreat as just ‘some poshos jumping on the wellness bandwagon’.

Certainly, our hosts sounded suitably pukka: former Army officer Merlin Hanbury-Tenison and his wife Lizzie, who are creating a sanctuary for stressed urbanites in a remote wooded valley on his family’s hill farm at Cabilla on Bodmin Moor.

On my last camping trip, circa 1968, I accidentally spilt a brimming latrine over fellow Girl Guides in a rain-drenched field near Chipping Camden, so I fervently hoped this new style would indeed prove glam rather than glum. 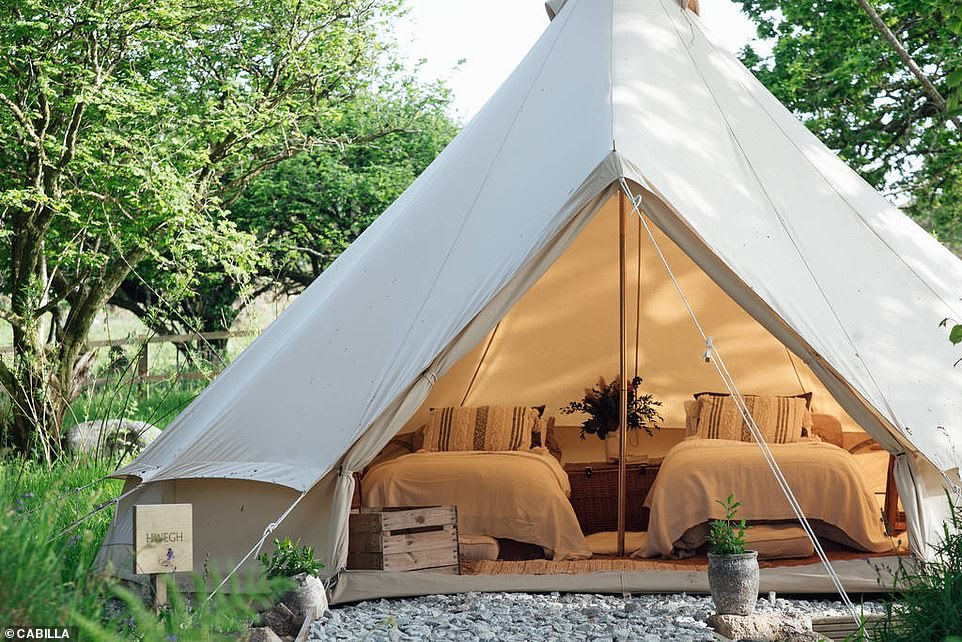 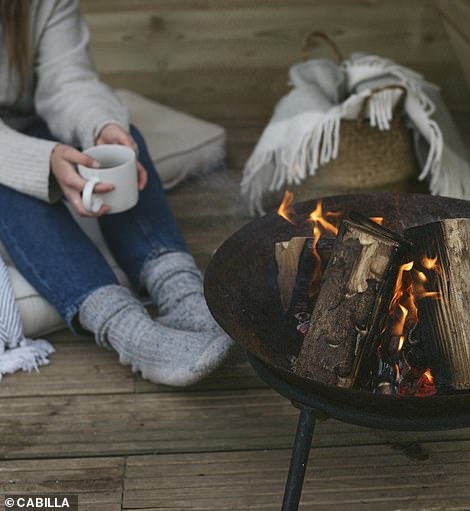 Cosy: A warming cuppa by the fire pit at Cabilla

My daughter Madeline, 29, and I were the perfect candidates: she recovering from flu after 12-hour days working in London, me red-eyed and exhausted from juggling caring for my indomitable 93-year-old mother and cajoling stroppy builders.

The clouds bunched threateningly over wild moorland, gorse and drystone walls as we arrived at Cabilla through green tunnels of oak and hawthorn.

Lizzie showed us the barn, newly converted into a well-equipped field kitchen, complete with gas hobs, ovens, plates and utensils for the glampers to share. And the plush eucalyptus-scented wash-house seemed more upmarket spa than loo block.

We stowed our food supplies, then sampled Cabilla’s artisan cheeseboard of creamy Cornish blue and nettle-swathed Yarg at a long communal wooden table with half-a-dozen other new arrivals.

A short walk over granite chipping paths brought us to The Glade, a dozen belltents scattered among tangled oaks in a haze of bluebells.

Tawny owls were hooting, rain thudding on the canvas as we settled in, anticipating a damp, windswept night. Not a bit of it.

Once fully zipped up, the double-layered bell tent was warm and dry, with sheepskin rugs, hot-water bottles and deep-pile duvets, a far cry from the sodden groundsheets of Guide camp.

At dawn, I heard my first cuckoo of the year and walked down through the woods in the yellowish light. 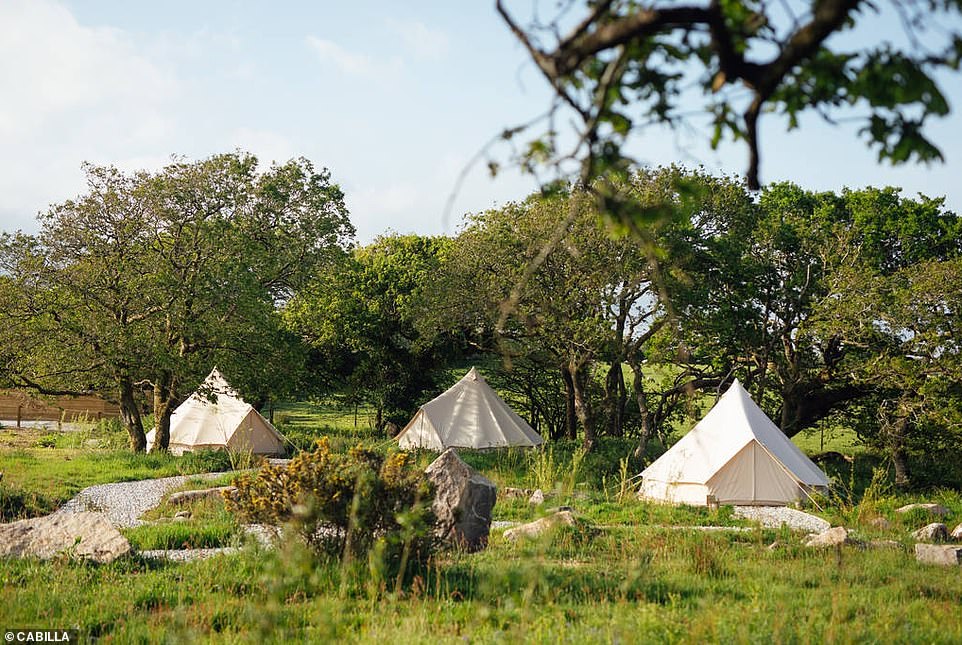 Guests will find a dozen bell tents scattered among tangled oaks in a haze of bluebells in The Glade, pictured above

Later, I enjoyed an hour-long massage (costing £60) in a nearby tent from Yolande Philpott, a popular travelling masseuse and Reiki healer.

This proved so soporific that I fell asleep as she kneaded the stress-knots out of my shoulders.

Meeting our fellow-glampers around a Famous Five-style campfire, they seemed an eclectic mix: outdoorsy types, creatives and nature lovers. There was George Stoy, who runs George’s Surf School in Polzeath, and Helen Brown, a former hotel manager, accompanied by her friend Douglas, a retired pig farmer. 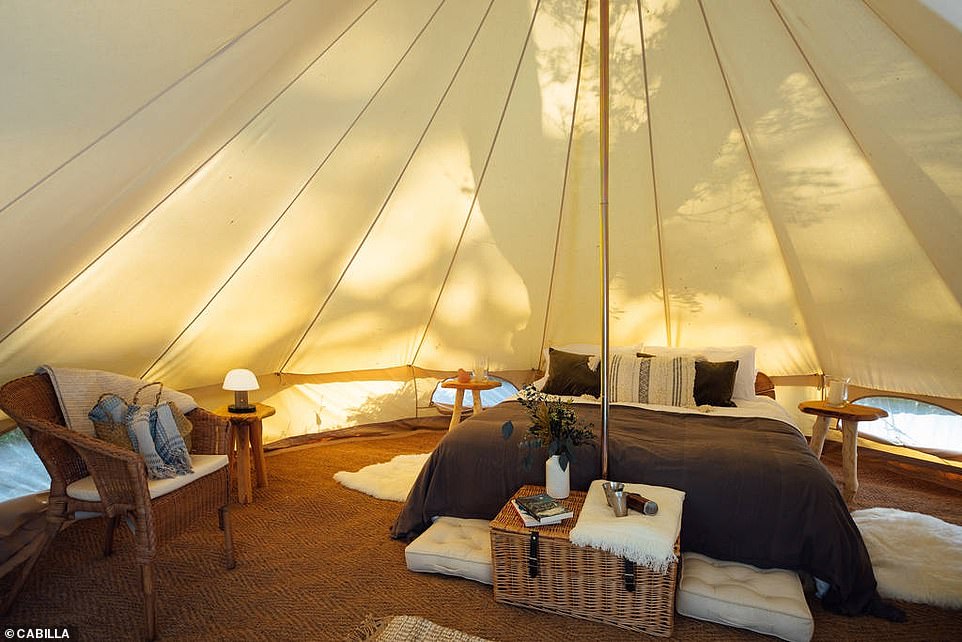 Above is the interior of one of the bell tents, which are equipped with sheepskin rugs, hot-water bottles and deep-pile duvets 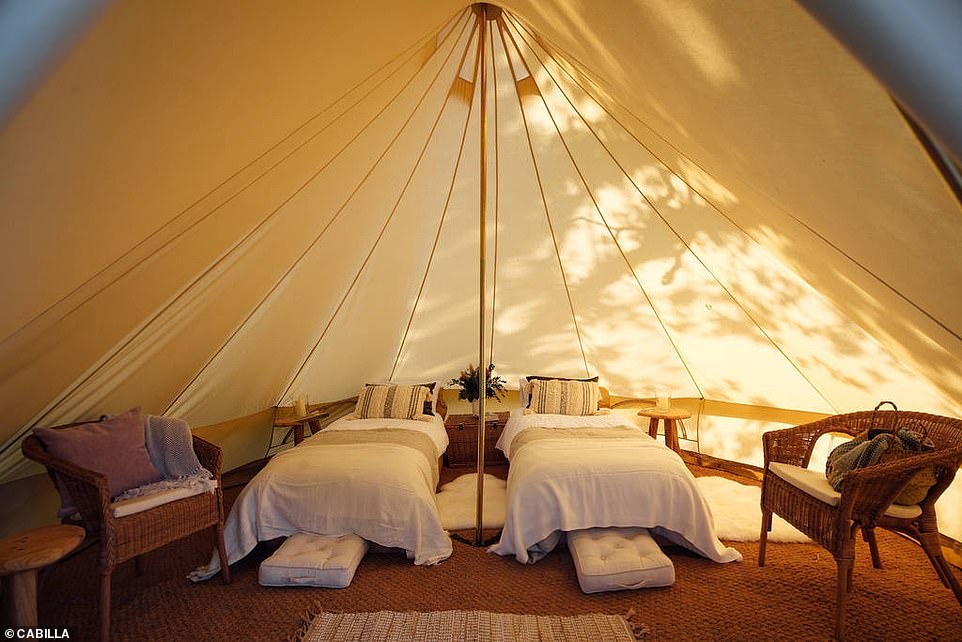 ‘I’m here because I love the wilderness of Bodmin Moor,’ said Helen, 57, an intrepid wild swimmer who had gone for a dip in a woodland pool at 4.30am.

‘Here, pig pig pig!’ yelled Merlin, producing a tasty spread of carrot tops which he gave to Gloria, a voracious Cornish black sow, one of the native breeds being reintroduced to enrich the natural ecosystem.

Gloria is already rooting in the moorland soil, unlocking the seed bank and diversifying the area’s plants and insects. 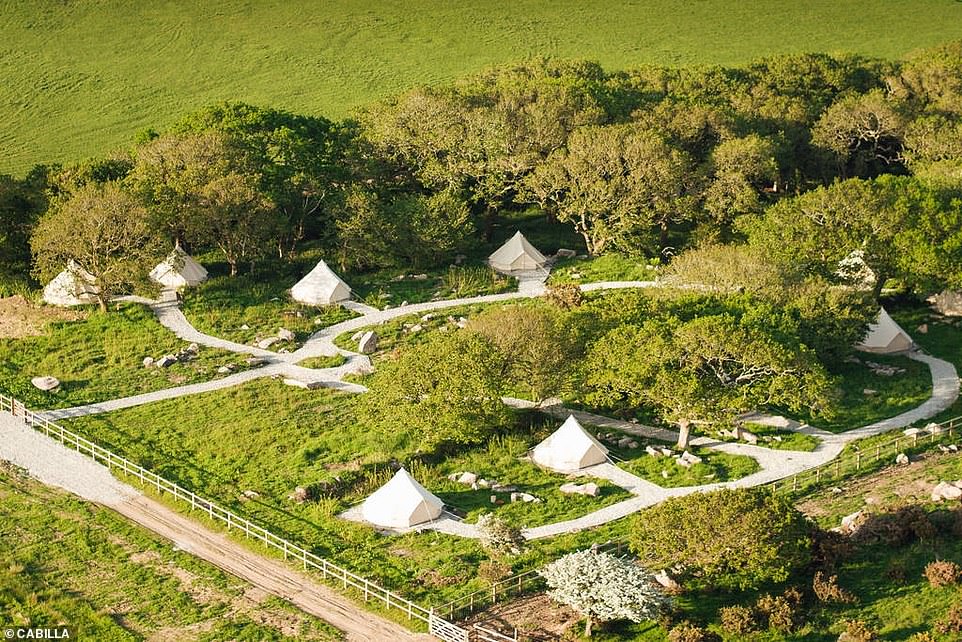 A bird’s eye view of the bell tents. ‘Tawny owls were hooting, rain thudding on the canvas as we settled in, anticipating a damp, windswept night. Not a bit of it,’ writes Sally 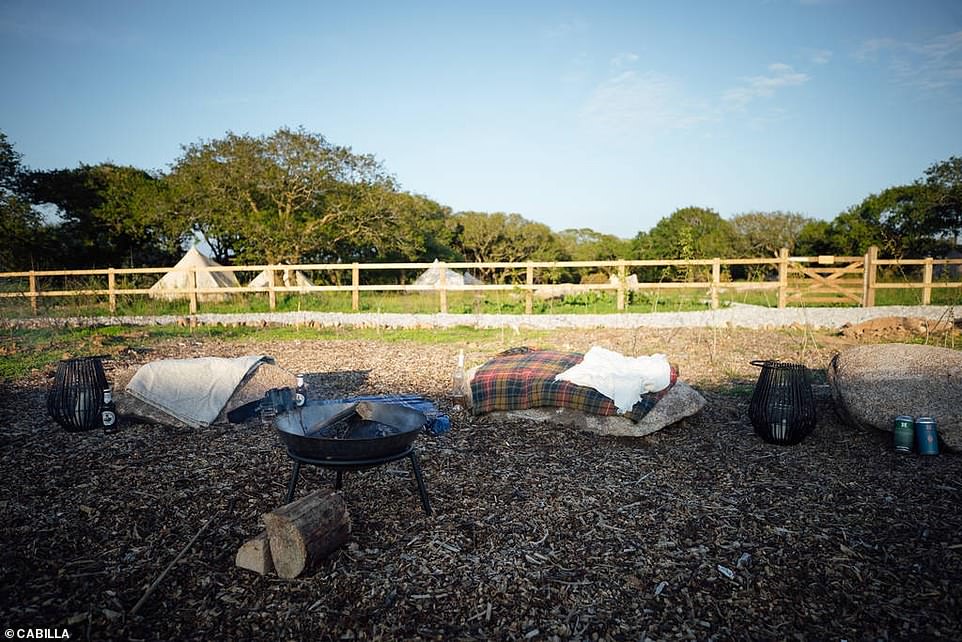 Sally and her daughter Madeline meet their fellow-glampers ‘around a Famous Five-style campfire’, pictured

After a slap-up Cornish cream tea, we wandered beside the chattering River Bedalder past a ruined tin mine counting house through ancient woods.

Despite his cut-glass tones, Merlin soon emerged not as a posturing Hooray, but a passionate woodsman, himself healed by the power of nature.

‘In 2007 I was blown up in a roadside bomb-blast in Afghanistan,’ he explained. ‘Then in 2017 while doing an exhausting City job I started suffering badly from PTSD and had a mini-breakdown: panic attacks, anxiety, bouts of depression. 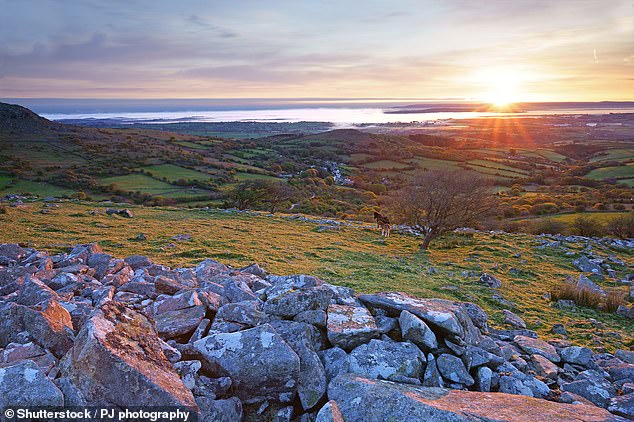 One guest tells Sally that she came to the retreat because she loves ‘the wilderness of Bodmin Moor.’ Above is a view of the moorland from Stowe’s Hill

‘Spending time in the valley, quietly experiencing nature in these woods saved me, helping restore my mental balance. We want to share this valley with others struggling with the stresses of life.’

At dusk, we visited the latest arrivals, breeding beavers, punningly named Sigourney and Jean-Claude. They were released onto the Bedalder in 2020.

The pair quickly began felling trees, damming the little river and building a lodge. The pools and marshland are creating more niches where species like mayfly, bullhead trout and badger can thrive in a complex eco-system. We waited silently, straining our eyes until a sturdy silhouette appeared, scrambling across the dam. A torch beam momentarily revealed Jean-Claude intently nibbling willow twigs.

After three nights we were packing reluctantly to go home when Merlin arrived, ecstatic after spotting tiny paw prints in the mud beside the lodge, the first evidence of a new dynasty of beaver kits.

Weeks later came the news that the first two kits, a brother and sister, were thriving — and in true Cabilla style had been named Beavie Nicks and Beavie Wonder.