Many people haven’t yet flown in the post-lockdown era and are probably curious about what the experience is like.

A fascinating new video by The Points Guy UK (TPG UK) travel advice site will go some way to lifting the veil of mystery around it.

Gatwick ‘didn’t feel safe’, Heathrow was ‘big on signage’ and hand-sanitising – and the BA lounge was ‘impressive’ – and London City felt ‘private, clean and easy’.

BA’s in-flight approach saw TPG UK given free hand sanitiser and a wipe, while the easyJet reviewer had to ask for wipes – and Loganair stocked wipes in the toilet. And scored top points for the fun factor… 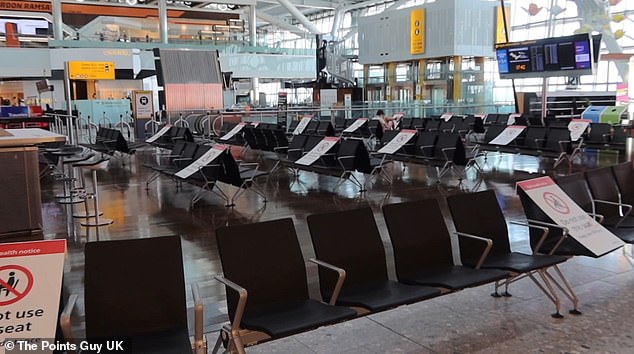 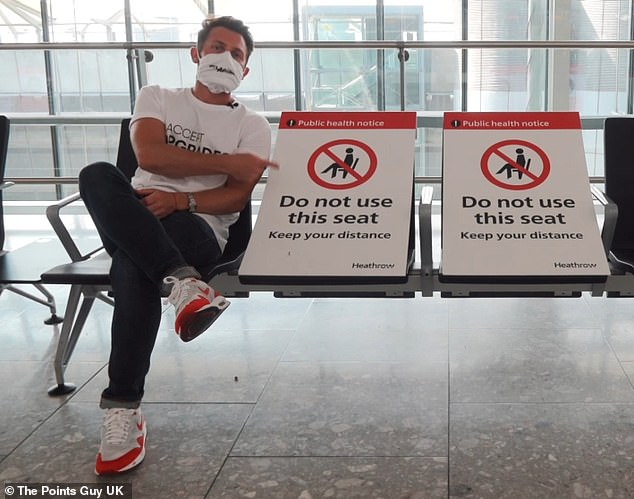 Pictured is Nicky Kelvin, the site’s Director of Content at Heathrow, before his BA flight 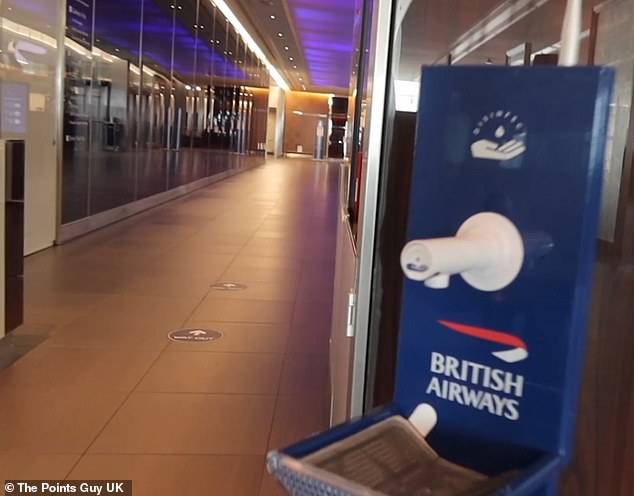 ‘There were hand sanitising stations all over the airport,’ said Nicky after his T5 experience

The Heathrow/British Airways experience was taken up by Nicky Kelvin, TPG UK’s Director of Content.

He flew from London Heathrow to Edinburgh from Terminal 5.

He said that Heathrow ‘went big on signage, encouraging mask-wearing and hand-washing’ and that ‘there were hand sanitising stations all over the airport’.

He said that no one actively enforced these rules, though. 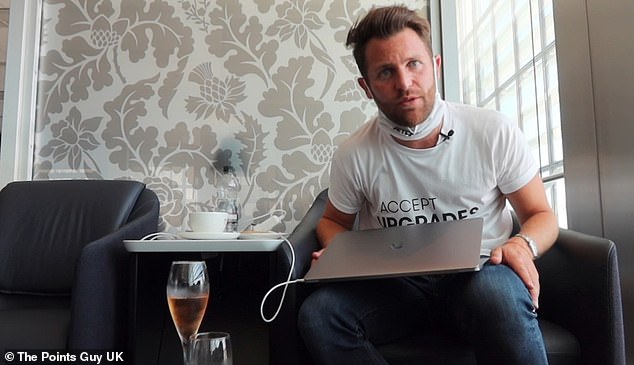 Nicky is pictured here in the British Airways Galleries First Lounge, in which he had an ‘interesting and positive’ experience

He continued: ‘Temperature checks were conducted at check-in, but only for flights to certain destinations, such as Italy. There were no special measures at security, and no forms to fill out, as this was a domestic flight, but this would vary by destination.

‘Most of the airport amenities, including high-end shops, restaurants and duty free were all open.’

The airport highlight was the British Airways Galleries First Lounge.

Nicky said: ‘The British Airways lounge experience was interesting and very positive. The buffet was closed. Instead, there were QR codes on each table. Scanning the QR code brought up a page which showed the available menu. You then order food and drink directly from this menu, and your order is brought to your table. The service was incredibly fast, and the food was great.’ 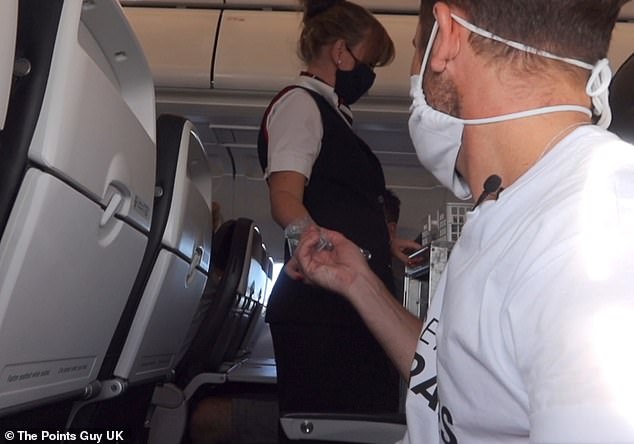 Nicky, pictured, said that each passenger was issued with a small pack including hand sanitiser and a disinfectant wipe

Boarding for his flight ‘was conducted in row groups from back to front… with status and class of travel all disregarded, with social distancing encouraged’.

He explained that the flight was almost full, but that he had a free seat next to him.

‘Most people were sitting right next to another passenger. BA are selling all seats on the plane,’ Nicky revealed. 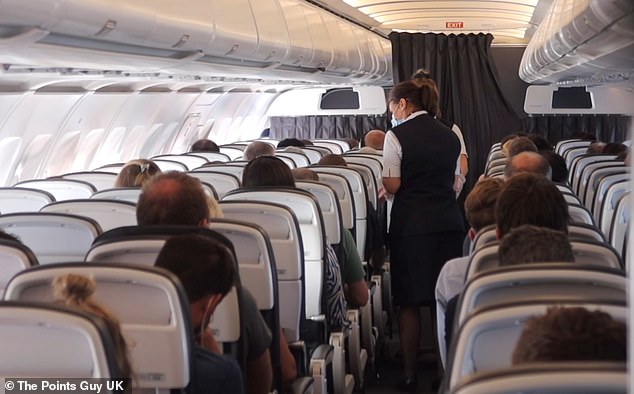 Nicky noted that the crew all wore masks throughout the flight

Each passenger, he said, was issued with a small pack including hand sanitiser and a disinfectant wipe.

And while BA usually offer a buy-on-board service on short-haul flights, Nicky said that this had been replaced with a complimentary snack in economy.

On his flight, he was offered a granola bar, biscuits and a bottle of water.

He added: ‘Passengers were advised to wear a mask throughout the flight, and to use the toilets you had to check the light was green – i.e the toilet was free.’

Queuing or loitering in the aisle or galley was a no-no.

Nicky also noted that the crew all wore masks throughout the flight and that disembarkation was conducted in the same way as boarding, with the rows called in groups from the front to the back.

EASYJET FROM GATWICK TO EDINBURGH 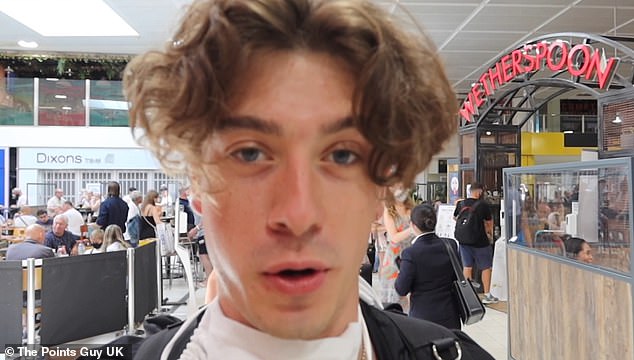 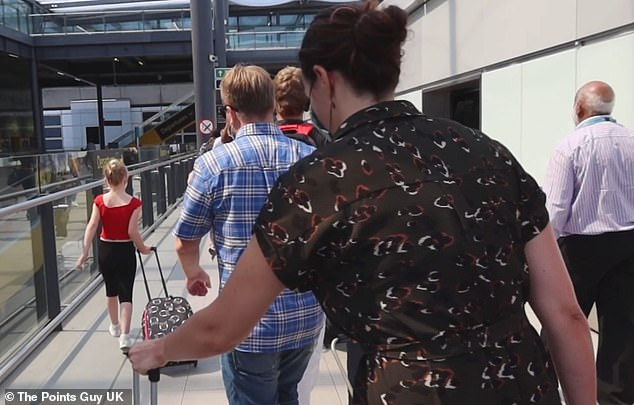 Social Media Lead Liam Spencer flew with easyJet from London Gatwick to Edinburgh and had a more mixed experience.

He said that Gatwick displayed ‘numerous signs regarding social distancing’ and had installed ‘multiple hand sanitising stations’ – but like Heathrow, no one enforced the rules.

Inside, though, he ‘didn’t feel particularly safe’. 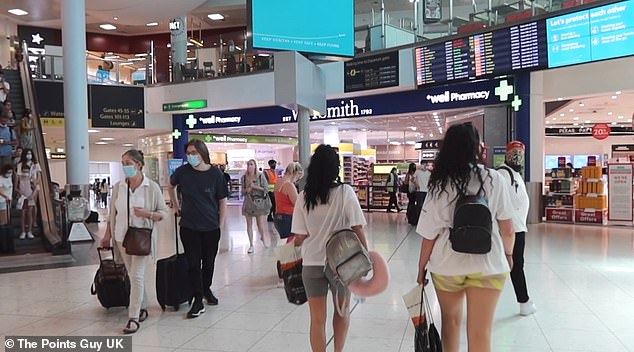 On the video he says that he’s ‘shocked at how busy it is’ and that if it weren’t for people wearing masks, you ‘wouldn’t have any idea that there was a pandemic going on’.

Once he was through security, he ventured into the Club Aspire Lounge.

‘Once inside the majority of people removed their masks,’ he said. ‘There was no table service and some of the hand sanitising stations were empty.’ 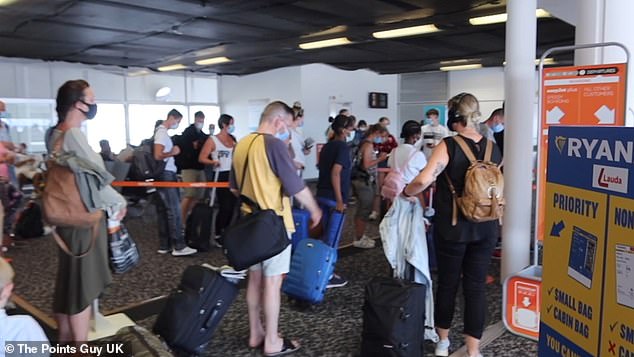 Liam said: ‘The boarding gate area was packed. There were no seats available’ 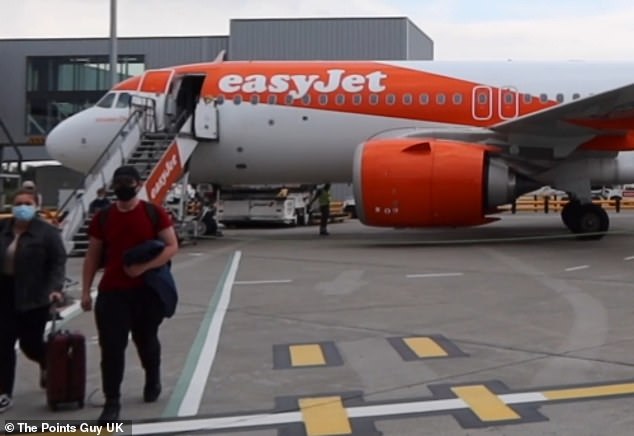 The boarding experience wasn’t reassuring, either.

Liam said: ‘The boarding gate area was packed. There were no seats available. The easyjet plane boarded back to front in three groups, but there was no social distancing maintained in the queue.

‘Nobody took my temperature or asked if I felt ok during the entire process.’

However, the flight was about 60 per cent full and Liam had a free seat next to him. 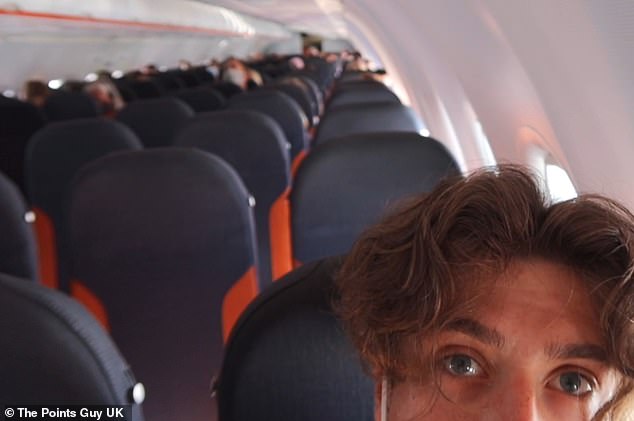 The cabin crew, he said, all wore masks, with passengers told to do the same.

‘A regular meal service started shortly after taking off,’ he added. ‘But I wasn’t offered any sanitiser and had to ask for disinfectant wipes.

‘Disembarkation was called out row by row.’

LOGANAIR FROM LONDON CITY TO DUNDEE 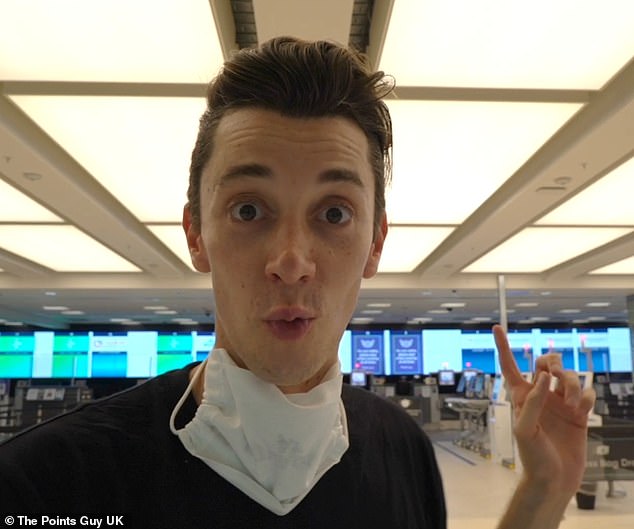 He said: ‘Flying from London City Airport felt private, clean and easy. I was virtually the only passenger in the airport, but there were plenty of staff both at check-in and security, so no queues and great service.

‘There were hand sanitisers in every corner of the airport and every person was wearing a mask, which made me feel safe.’

However, he was disappointed that not many shops or restaurants were open, apart from Pret a Manger – ‘the only hot food option’ – Boots, WH Smith and Duty Free. 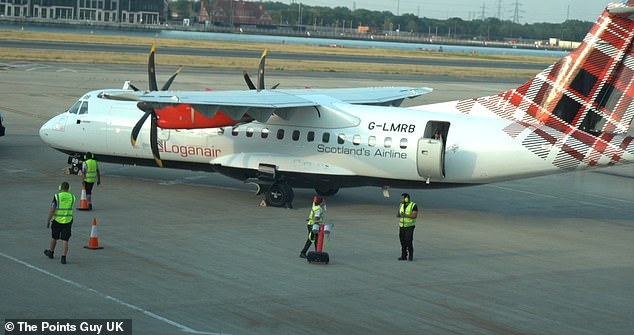 Flying with Loganair was fun, said Jean, with the ATR 42-500 twin-turboprop plane, pictured, feeling like something from an old movie

Jean said: ‘I like to have a proper airport experience, but there isn’t one to be had.’

Flying with Loganair, though, was ‘fun’. Partly because the service was operated by an old-fashioned ATR 42-500 twin-turboprop plane.

‘It felt like something from an old movie,’ said Jean.

He said he was given ‘no food or drinks, not even water’, but added that the solo cabin crew was ‘friendly’ and wore ‘a beautifully designed tartan face mask for the entire flight’. 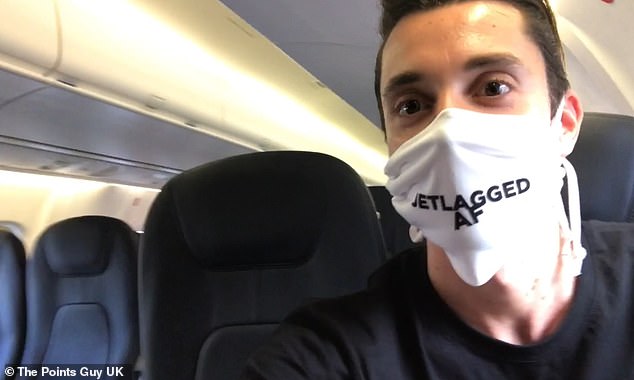 Jean was easily able to social distance on the plane, because there were only 11 people on it 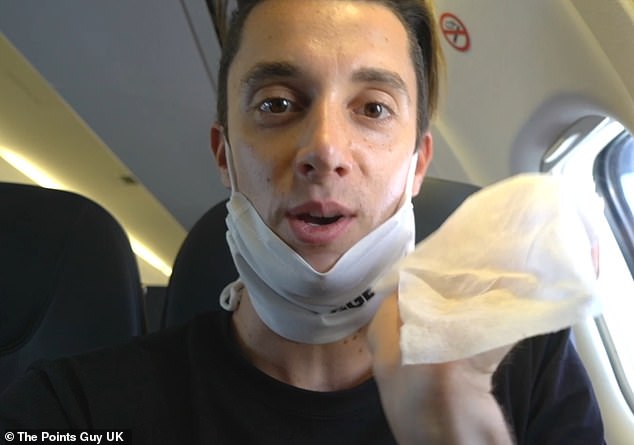 There were only 11 other passengers onboard, he revealed, ‘giving an entire row to each passenger so plenty of social distancing, which felt great’. And there were anti-bacterial wipes in the toilet.

So Jean’s experience was quite positive, but he mused that it would have felt a bit different if it was busy.

Some flights will be, as Loganair is selling as many seats as demand requires.