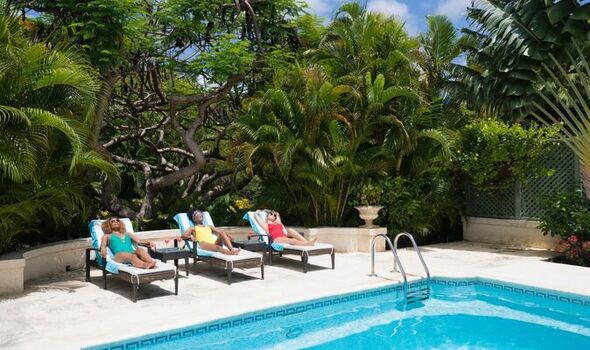 Wearing swimwear as underwear (26 percent), chatting to strangers (23 percent), and taking a complete break from technology (21 percent) also made the list.

It also found nine in ten (91 percent) confess to have a “holiday alter-ego”, with 17 percent claiming to have missed “holiday them” during the pandemic.

With travel set to boom again in 2022, the research was commissioned by Walkers, Doritos and easyJet Holidays to celebrate a new partnership, offering Brits the chance to win a holiday every hour.

Katherine Cook, spokeswoman for Walkers, said: “After years of travel restrictions, we know the nation has missed having the freedom to travel and make memories with friends and family on holiday, and in turn missed their happier and more carefree holiday alter-egos.

“Our study shows just how much Brits enjoy being their holiday self – letting all their worries and self-consciousness go when abroad.

“The list of holiday moments features lots of food- and fashion-related scenarios which reflect how people become more carefree on their holidays, showing a positive behaviour change.

“So, what better way to celebrate the return of summer holidays than by reuniting our customers with their beloved holidays abroad?”

The study also found the good weather (43 percent), anonymity (29 percent) and increased confidence (17 percent) experienced abroad cause people to act out of character.

Those aged 18-24 are most likely to have a holiday alter-ego, with 97 percent of this age group claiming to act differently while abroad.

However, while this decreases slightly with each generation, even 89 percent of those over 65 admit to having a “vacation version” of themselves.

More than half of adults (53 percent) prefer the holiday version of themselves, claiming they’re happier (57 percent), carefree (52 percent) and more fun (45 percent) than their usual selves.

Among those with a “holiday alter-ego”, the shift in personality is most likely to come into play at the airport (33 percent), while for some it emerges while they’re packing (17 percent) or the moment their out of office goes on (17 percent).

Alongside adopting holiday alter-egos, many also give their image an overhaul while abroad, with 20 percent opting to “express” themselves with bolder fashion choices.

When it comes to crimes against holiday fashion, men are the guiltier party – with a tenth claiming socks and sandals look good, versus four percent of women.

A further 12 percent favour a holiday bum bag, compared to seven percent of women, while more than one in 20 men (six percent) even go all out and don a mankini when abroad.

Additionally, despite a quarter (26 percent) insisting on wearing swimwear in place of underwear while abroad, a third always take way more underwear than they need, packing an additional five pairs on average.

Fashion choices aside, newly sun-kissed skin proves a bonus for couples, with almost one in ten (eight percent) claiming to fancy their partner more with a tan.

And the same number (eight percent) of those polled, via OnePoll, even claim to like the dreaded t-shirt tan – 12 percent of men versus five percent of women.

TOP 40 THINGS BRITS ONLY DO ON HOLIDAY: