Britain at its best: Thornbury is where Henry VIII romanced Anne Boleyn – and it still fizzes with seductive charm

Thornbury is a market town with its roots in agriculture and cider making (Riddle’s has been made on a wooden apple press by the Riddles family for more than a century).

Farms and fruit orchards dot surrounding Severn Valley — once Henry’s VIII’s deer park — with views across the water to the Welsh hills.

The town was first mentioned as ‘Thornbyrig’ in the Domesday Book in the 11th century, although it is most likely older as a whopping 11,460 Roman coins, dating from AD 260-348, were found in 2004 while a pond was being dug. 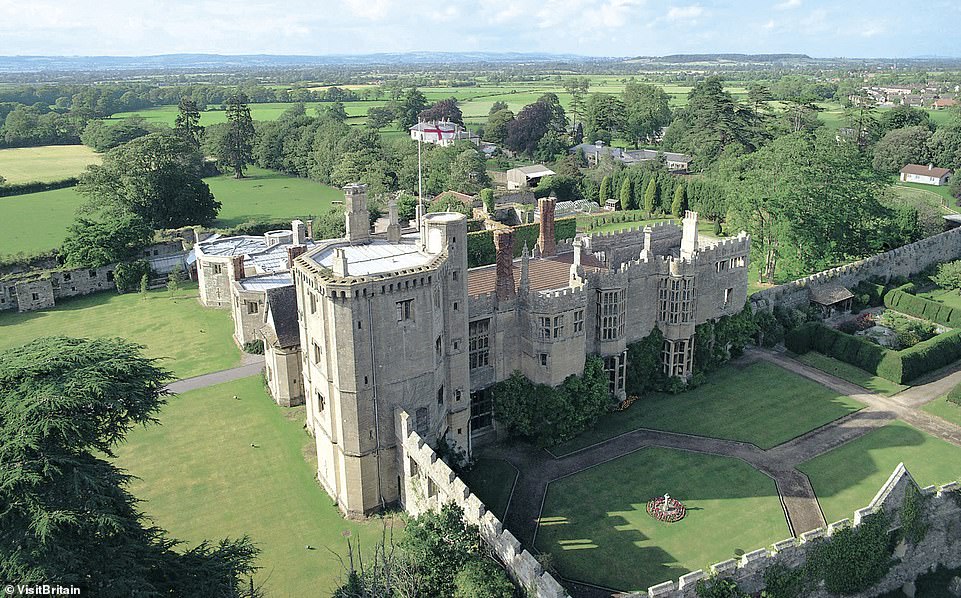 Keep it regal: Thornbury Castle – the entirety of which is now a hotel – dates from 1511 and was once owned by Henry VIII 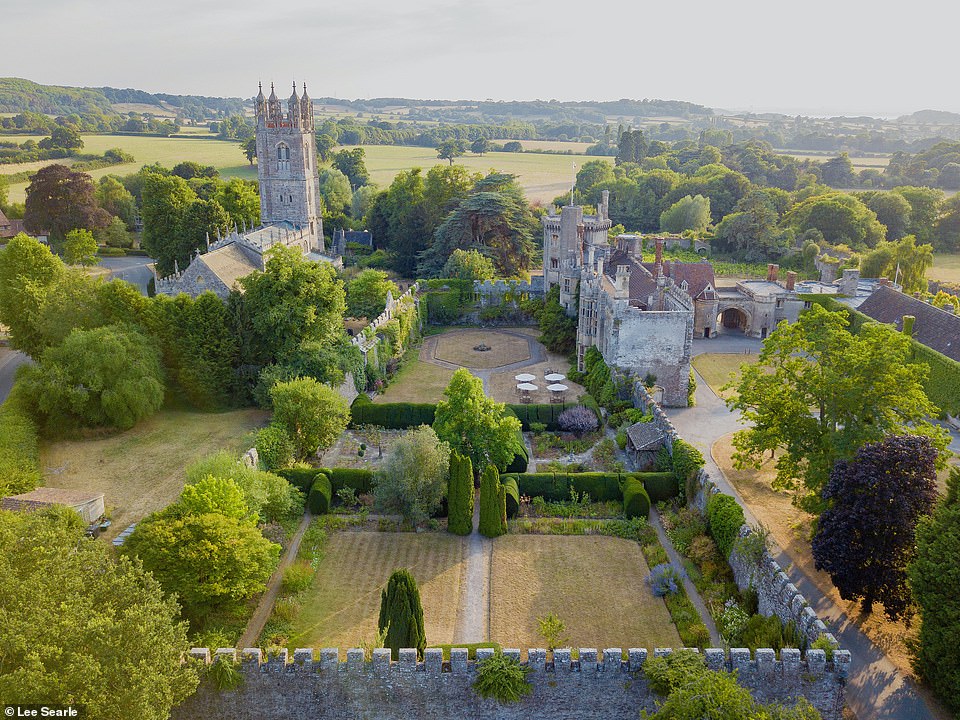 Thornbury Castle is surrounded by the Severn Valley, which was once Henry’s VIII’s deer park. The castle’s grounds are shown here 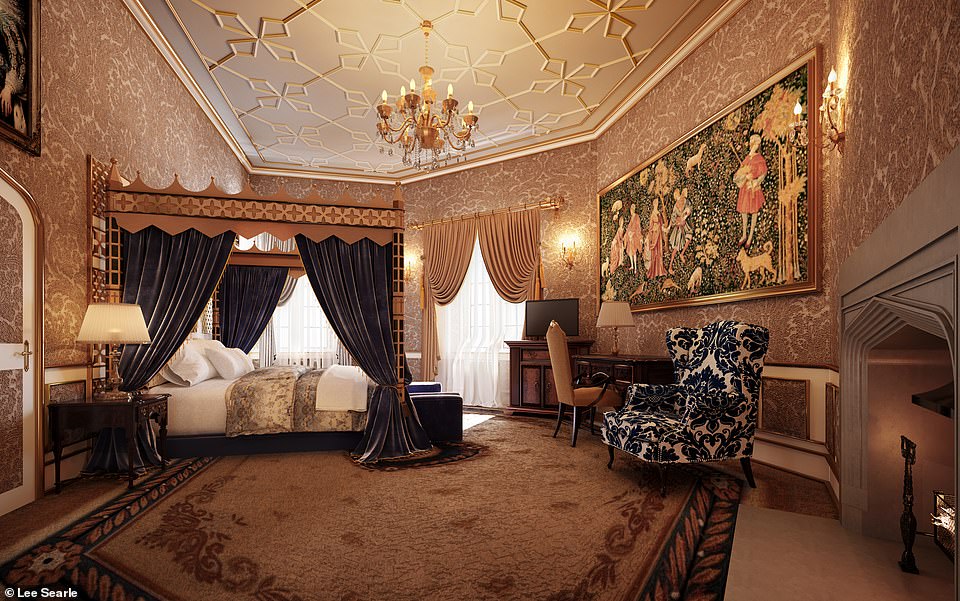 Edward Stafford began construction on the castle in a ‘display of ambition’ that riled Henry VIII, Kate reveals. Pictured is one of the hotel’s beautiful bedchambers 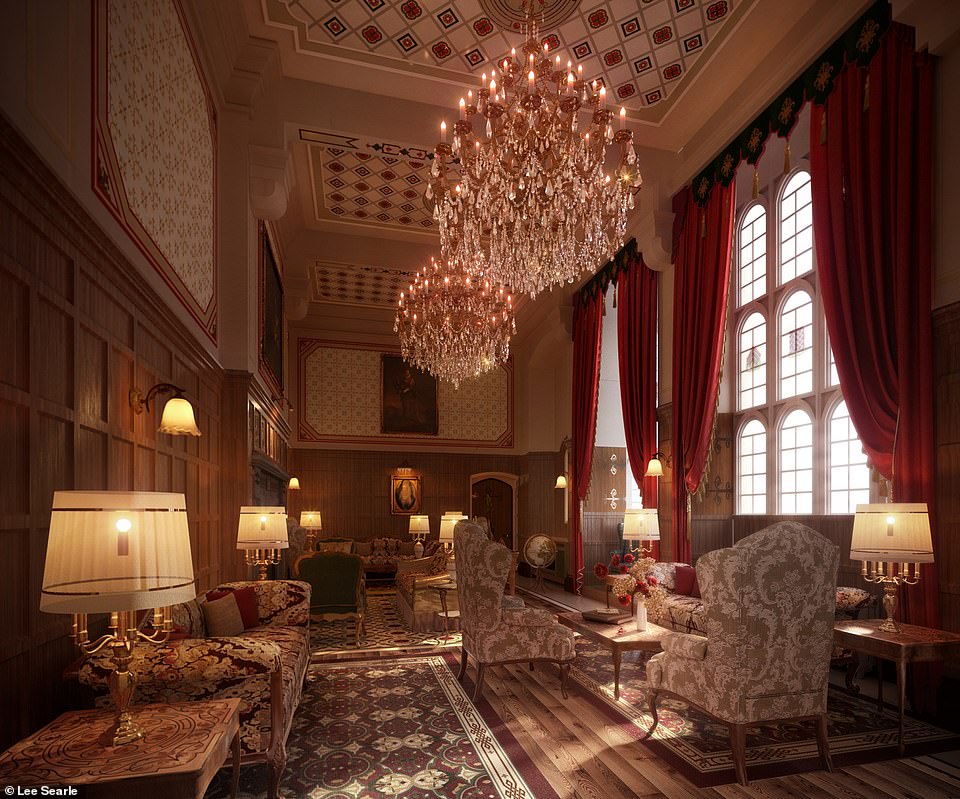 In the Privy Garden of Thornbury Castle hotel, I discover woven bee skeps (hives) in nooks sitting within the ancient stone walls, exactly as they would have done when Henry strolled these grounds with Anne Boleyn, in 1535.

‘Henry had a sweet tooth and liked his honey,’ a passing gardener tells me, as if talking about someone we both knew. And it’s not hard to conjure up an image of the Tudor king in such surroundings, perhaps enjoying a glass of mead.

Edward Stafford (the only man to rival the king’s wealth) began construction of the castle in 1511. It was a display of ambition that got Henry’s back up.

Found guilty of treason, Stafford was beheaded and Henry seized the castle. And no wonder. Although small, it’s a beauty. 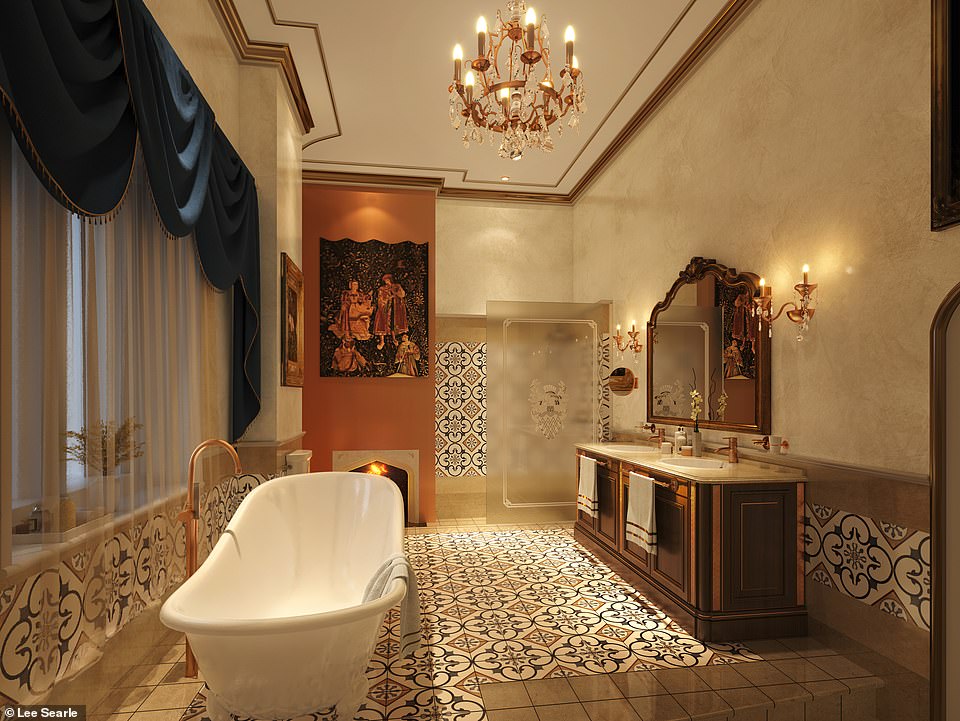 Pictured is one of the bathrooms in the hotel. ‘Although small, it’s a beauty’, Kate says of Thornbury Castle after visiting the grand estate 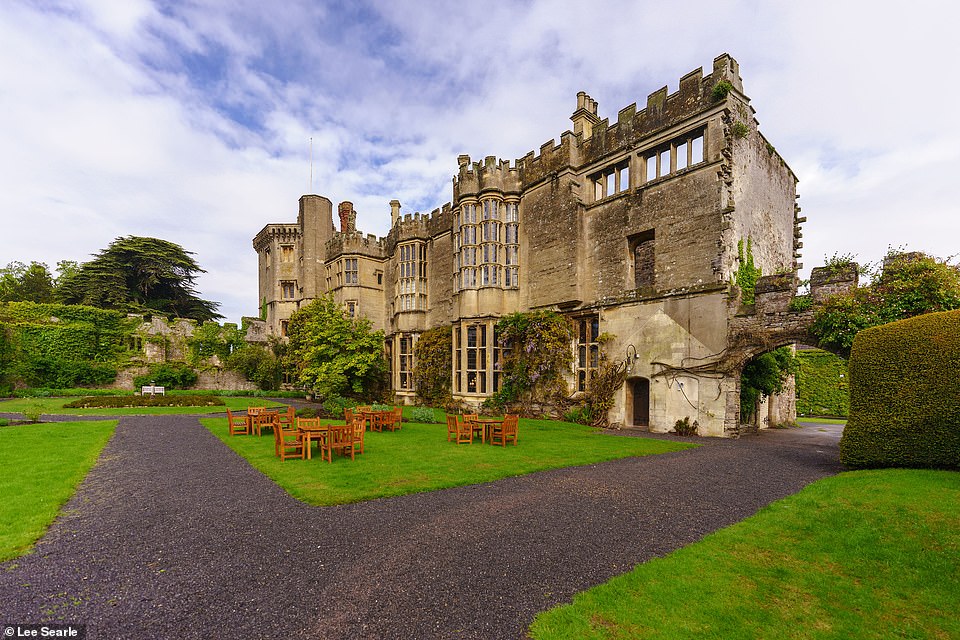 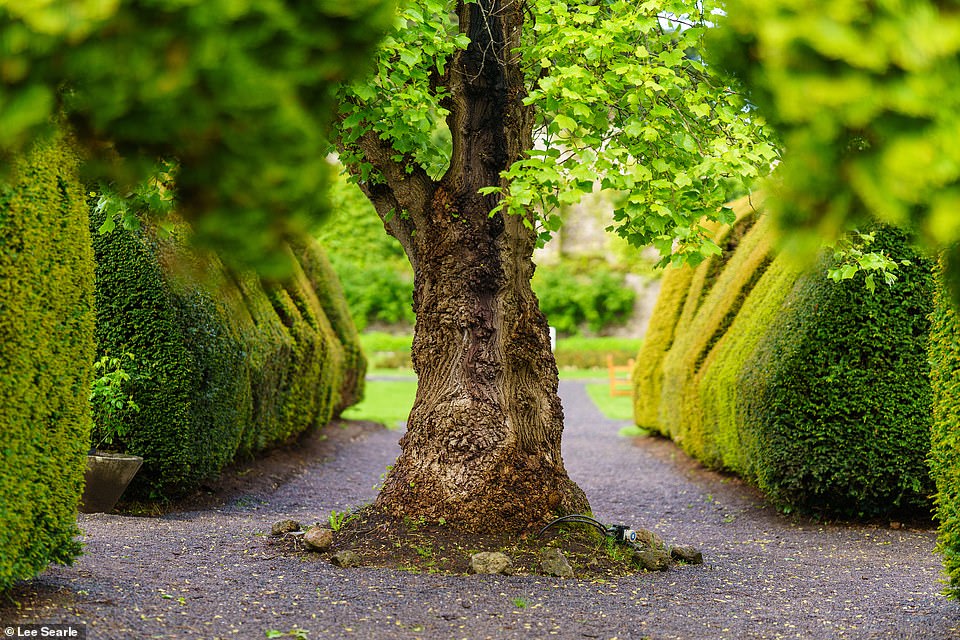 Henry wandered the grounds of Thornbury Castle, pictured above, with his wife Anne Boleyn in 1535 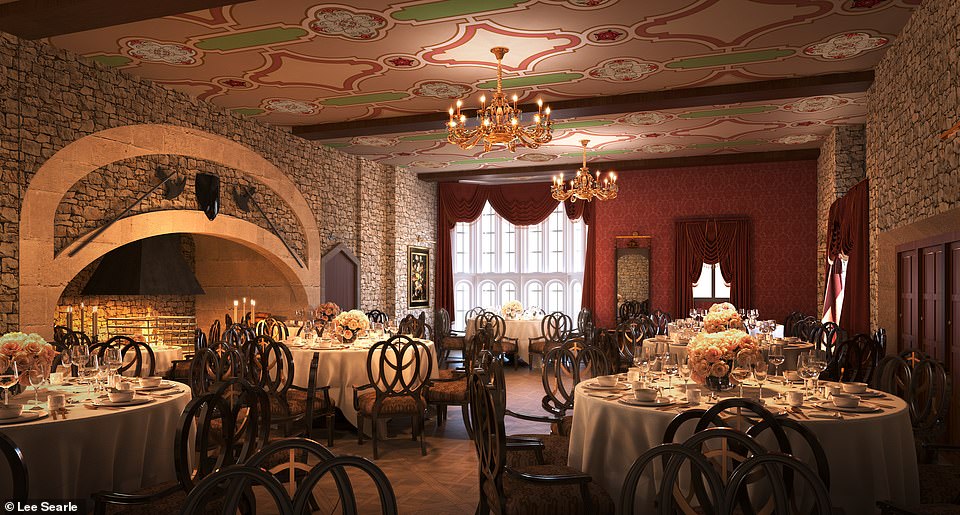 It has recently reopened after a restoration overseen by English Heritage, however it’s not the oldest of Thornbury’s buildings. You’ll find that next door. The attractive Grade I-listed church of St Mary’s was built in 1340, on the site of a Norman church.

Through a graveyard of tumbling tombstones, I tiptoe to read inscriptions dating from the 15th century and beyond.

More ancient engravings have either worn away or are carpeted in thick green moss, and in one of these lies the entrails of Henry VII’s beloved uncle and mentor, Jasper Tudor (the rest of him is buried in Keynsham Abbey). 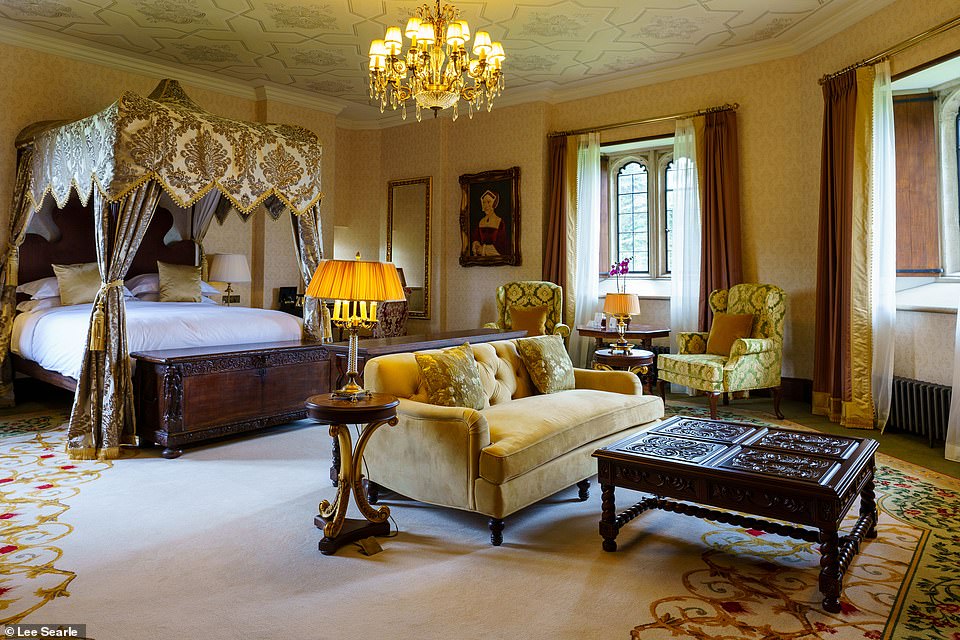 Pictured is one of the 26 rooms in the hotel. Elsewhere on the estate, an octagonal tower houses the bedchamber that belonged to Henry VIII 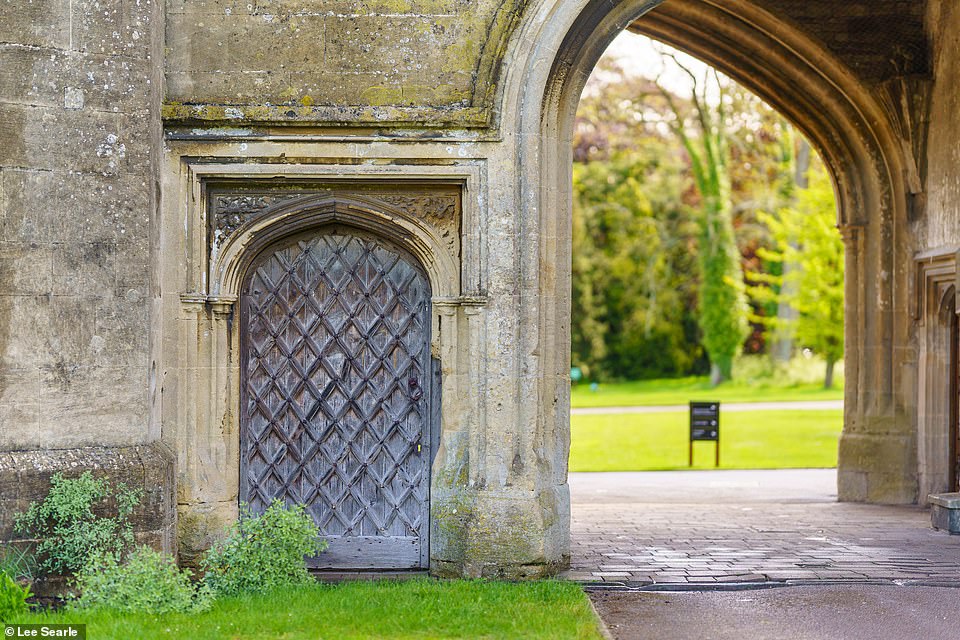 Kate admits: ‘It’s not hard to conjure up an image of the Tudor king in such surroundings’ 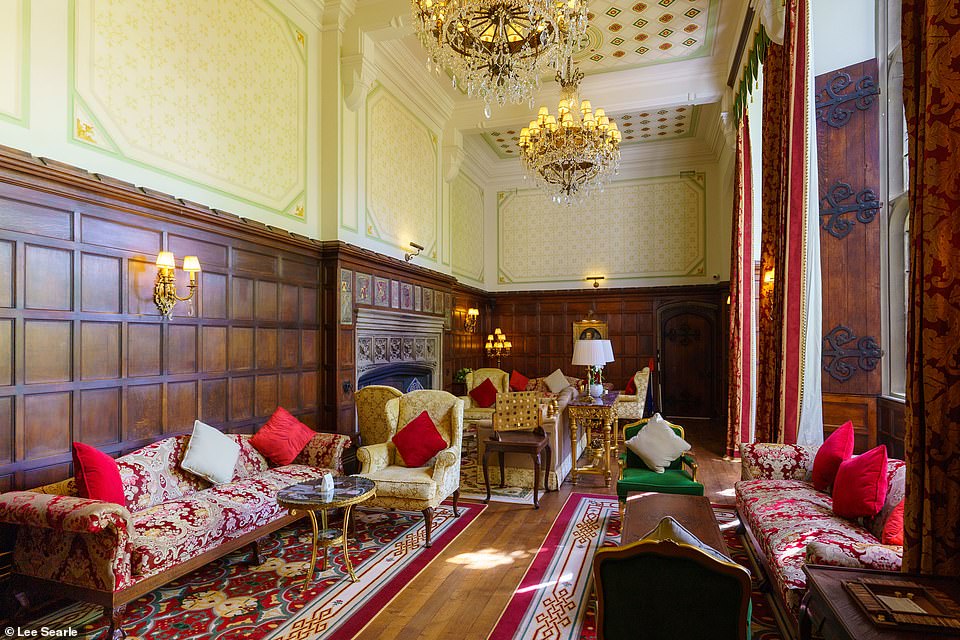 Bed and breakfast doubles at Thornbury Castle are priced from £229. Pictured here is the hotel’s lounge 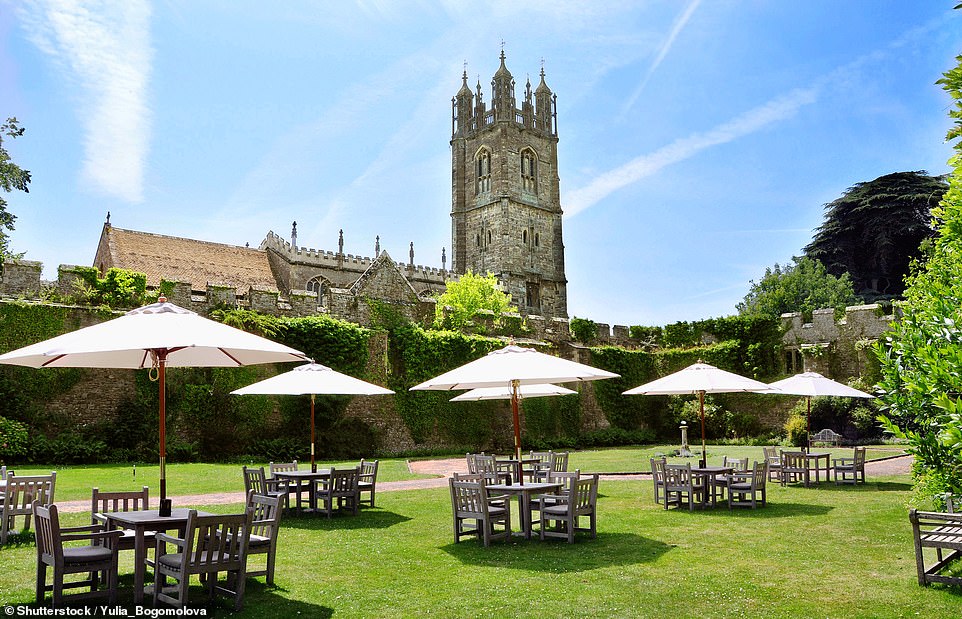 Kate recommends visiting the Grade I-listed church of St Mary’s, pictured, next to the stone walls of the castle grounds 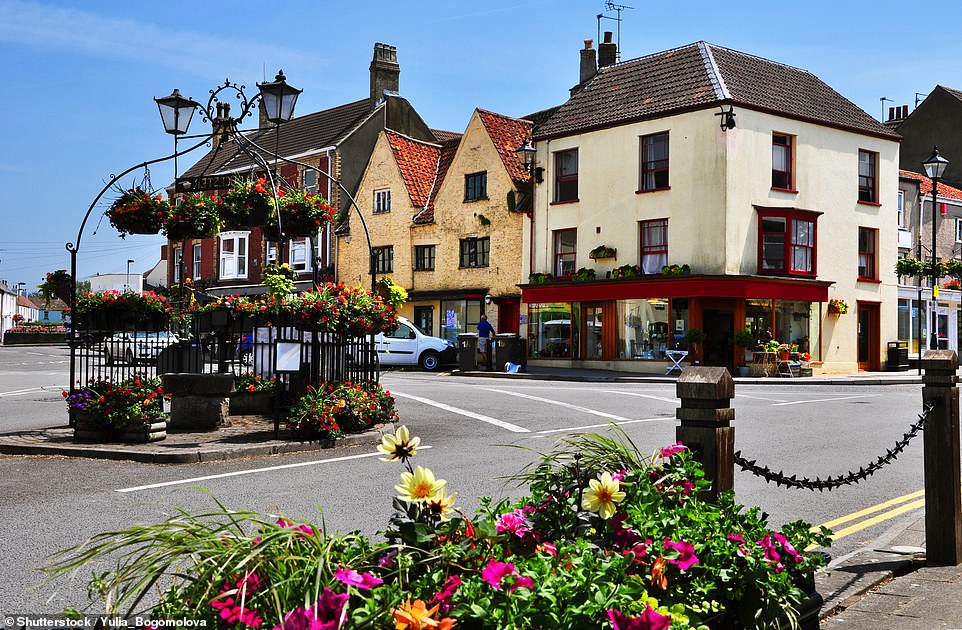 Thornbury, pictured, was first mentioned as ‘Thornbyrig’ in the Domesday Book in the 11th century

Fans of TV’s Open All Hours, should head to L. E. Riddiford — a provisions store established in 1928 that was writer Roy Clarke’s inspiration for Arkwright’s shop.

At The Plain (where in the 1900s a livestock market was held), you’ll find a flower-festooned replica of the pump installed in 1857 by bankers Messrs Harwood, Hatcher and Sams.

I wander along Castle Street, lined with impressive period properties such as medieval Porch House, and The Chantry (dated by English Heritage as 16th century), where priests once prayed (for a price) for the souls of Thornbury’s deceased.

Records show it was purchased in 1699 by a farmer with grand designs — as the large wooden door is believed to have come from the castle; repurposed during the years that the castle lay derelict.

Back at the castle, I sit on a throne-like chair covered in red brocade in the hotel’s regal restaurant and order the hearty saddle of lamb that proves to be a feast fit for a king.