An Inspector calls… at The Town House in Arundel and loves the view from his room to the castle, but it has ‘strangely depressing’ curtains and a ‘hideous’ bathroom mirror

We tell the owner of one of Arundel’s antique shops that we’re staying at the Town House.

‘Good luck,’ he says. This is a surprise because Lee and Katie Williams’ restaurant with rooms has won rave reviews — but, clearly, I haven’t done my homework. They sold shortly before the first lockdown.

The restaurant is no more (but there’s an excellent Chinese next door). 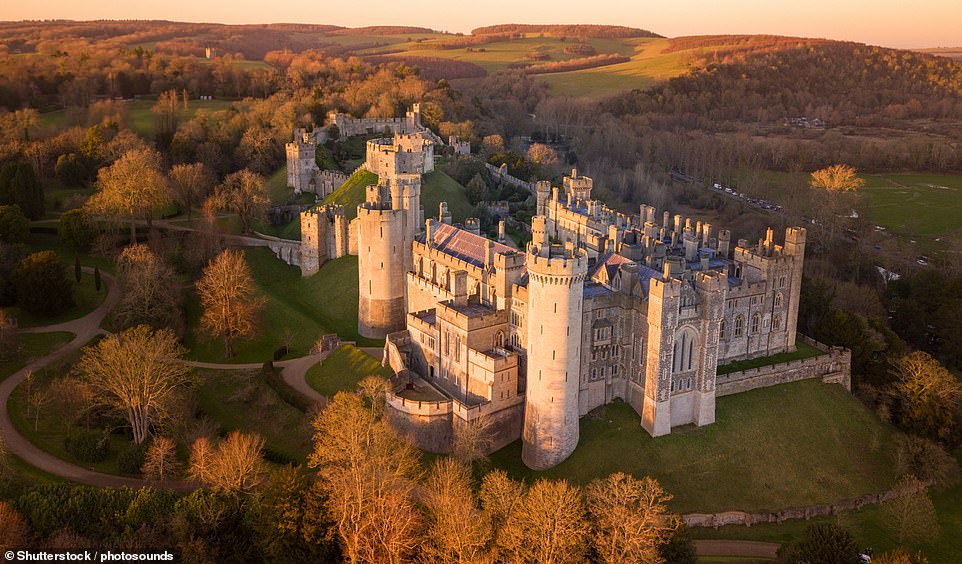 Instead, the new owner has opted for a cocktail/wine bar, with three bedrooms reached by a steep but pretty Georgian staircase sandwiched between the bar and kitchen.

Grade II-listed, the Town House was built around the 1800s, but the ceiling on the ground floor dates from the late 16th century.

Apparently, the owner at the time wanted a Florentine ceiling and went to Italy to get one. Carved from walnut and gilded, it’s magnificent and deserves better than presiding over a few unimaginative tables and chairs.

Something similar is going on in our huge first floor room, which has a pair of Regency French doors that open to a narrow balcony, with spectacular views across the road to Arundel castle.

With all this going on, how on earth can anyone let a flimsy, Ikea-style wardrobe stand in one corner, a modern pine mirror in another. And the noise from the bar below rises into the room at will.

There’s a four-poster bed, but it can’t hold its own in this setting. It’s too small and the duvet is long dead. Two leatherette armchairs are parked underneath the smallest of TVs.

One of the chairs is ripped and needs replacing. The brown curtains match the walls but are strangely depressing.

The carpet could do with a shampoo. Speaking of which, the two tiny bottles of shampoo and bath gel are insulting when paying £150 for bed and breakfast. And the hideous mirror in the bathroom near the plastic free-standing bath should be removed immediately.

Perhaps all this was here when Mr and Mrs Williams were in charge — but maybe it didn’t matter so much. It’s possible that the food did the dazzling.

Mind you, we enjoy our breakfast — and the company of the friendly woman serving it. She fills us in on the history of the place, which is impressive. It’s the future that must be a worry.