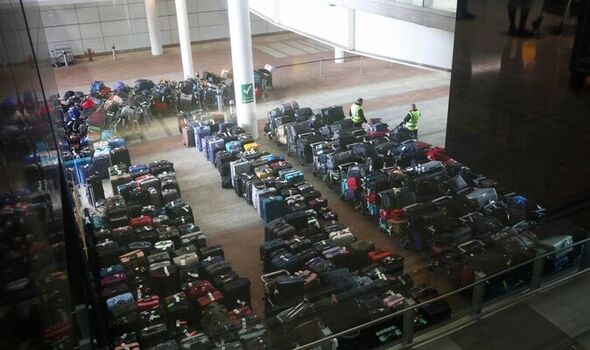 The captain was seen on the tarmac at Edinburgh heaving luggage on to a flight with Swiss carrier Edelweiss. A co-pilot named only as Simon who did the same was described as “heroic” and a “legend” by people on a Tui flight to Crete from Manchester that had been delayed for 32 hours.

Their efforts came as Stansted, one of Britain’s busiest airports, was compared to a “shootout” scene as people slept on floors at 3am. And hundreds of suitcases piled up in Heathrow’s Terminal 2 following a weekend carousel malfunction, which could take two days to clear.

Mammoth queues built at Stansted as flights were held up by more than six hours.Then a cancelled train to the airport service caused a large number of people to arrive at once.

Furious travellers went on social media blasting poor information, lack of hot food and drinks and unexplained waits of several hours before being able to board planes. One said: “The whole of England is in the security queue.”

Another added: “Stansted 3am is the most no-rules place in the world. Bodies scattered all over the floor like there’s been a shootout.”

Stansted said 38,000 passengers were expected to depart yesterday, before the cancelled train chaos.

A spokesman added: “This was compounded by a higher absence level than normal, which would have reduced the number of security lanes available at that peak time.”

Among those caught at Stansted was Labour shadow foreign secretary David Lammy. He tweeted: ‘Another morning, another horrid queue at airport security! This time at Stansted.”

Airports have been urged to cancel more flights over the summer to avoid chaotic scenes. Gatwick is cutting 4,000 daily flights throughout August.

Thousands of workers in the aviation industry were laid off during Covid when world flights were axed.

Heathrow CEO John Holland-Kaye says it will take 12 to 18 months to get capacity back to pre-pandemic levels.