A holiday built for two: Tandem cycling has never been more popular — so saddle up and head to the wilds of the Yorkshire Dales

Be warned,’ says Ruth before we set off. ‘The hardest thing is being able to keep smiling when the millionth passer-by shouts, “He’s not pedalling at the back!” ’

After two hours of riding across the wilds of the Yorkshire Dales National Park, my rictus grin from the back saddle of our tandem is starting to ache as hiker after hiker yells out the gag.

Stale jokes aside, a tandem bike holiday is a fresh and oddly refined adventure. 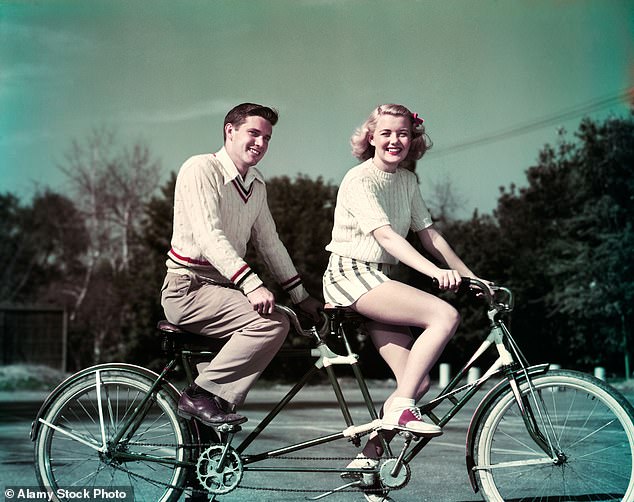 Invented in the 1880s as a low-cost means of transport for two before cars took off, tandem bikes have been having a mini revival. Pictured are a couple riding tandem in the 1950s

Visually impaired since birth and with rapidly deteriorating sight, I haven’t been on a bicycle for 20 years.

‘Riding “stoker” at the back of a tandem bike is hugely popular with blind and visually impaired people,’ says Ruth Hargreaves who, along with her husband, John, operates JD Tandems, a specialist bike store in Skipton.

My better-sighted friend Sam and I have hired a tandem from them.

Invented in the 1880s as a low-cost means of transport for two before cars took off, tandem bikes have been having a mini revival. 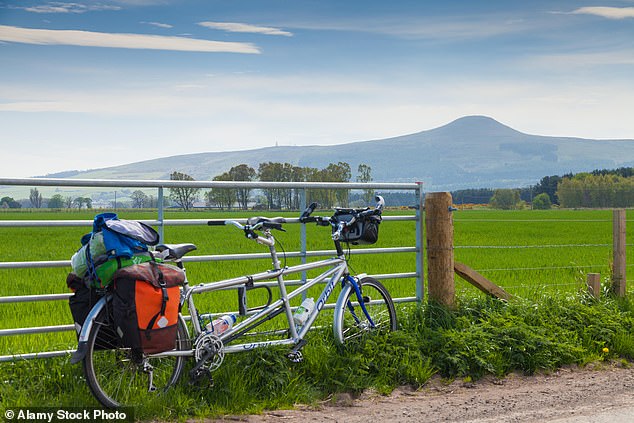 More than a thousand were sold last year, and the UK’s Tandem Club, established in 1971, currently has more than 3,000 members.

I learn two things quickly. First, you really can pick up speed when going downhill. Second, the ‘pilot’ needs to shout instructions at the ‘stoker’ as to when gears are going to be changed, and when the giddy joy of taking your feet off the pedals in unison can commence.

The initial wobbles soon subside, and we soar along lanes lined with dry stone walls, behind which we spot slate-roofed cottages, tumbledown barns, inquisitive sheep and unimpressed cows. 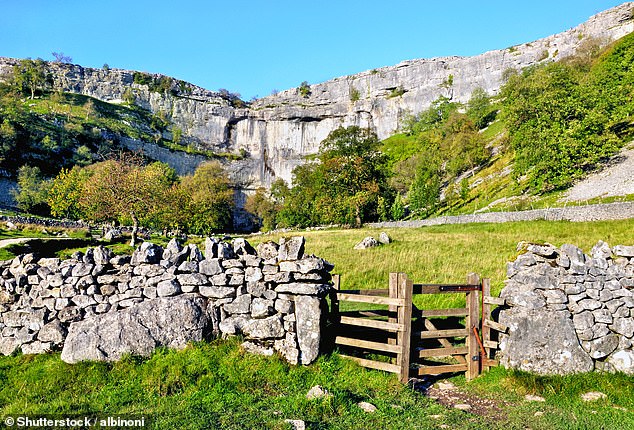 JD Tandems can arrange full-day hire of its tandem bikes from £70 (tandems.co.uk).

At pubs and inns, arriving on a tandem is a fine conversation starter. We pause in the village of Malham for a half of Thwaites ale at the Lister Arms, a country inn where dogs doze and you feel James Herriot may enter dressed in tweed at any moment.

Passing the colossal limestone escarpment of Malham Cove, we glide by the treeless slopes of Pen-y-ghent. Finally, we breeze into the village of Hetton, home to one of Britain’s oldest gastropubs, for a rewarding gourmet dinner.

The Angel Inn was a trailblazer in the 1970s for going beyond pork pies and sarnies, and it has kept pace with the times. It’s now under the stewardship of chef Michael Wignall and won its first Michelin star last year.

The tasting menu (with accompanying flights of cider, wine and sake) includes a perfectly pink Anjou pigeon and a sublime salt-baked celeriac served with a chilled spoonful of smoked ricotta.

Saddle sores abating and stomachs full, it turns out that pedal and pleasure combine mightily well on a bicycle built for two.