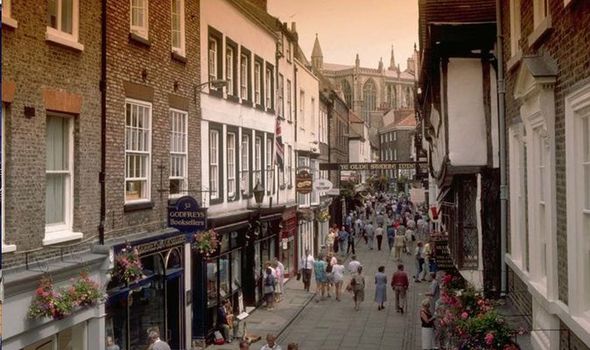 Yorkshire’s history spans 10,000 years, and finds itself home to what are known as the ‘Ghosts of the Greatest Longevity’, including the ghost of highwayman Dick Turpin.

Of the nearly 800 sightings reported to paranormaldatabase.com, 80 of them are in the city of York, compared to the 12,157 sightings across the whole of the UK, according to psychicworld.com.

York was the first city in Europe to host ghost walks, with sightings being 303 per cent higher than the UK average, naming it the ‘haunted capital of Europe’.

From an army of Roman soldiers, to the spot where you can ‘see your future’, here are 10 of the scariest York ghost stories from the Paranormal Database that will make you think twice about trick or treating.

One report said that a teenage girl using the changing room looked in the mirror and spotted another young girl behind her. Believing that the girl had accidently walked into the changing room, the teenager turned and asked the girl to leave.

The girl turned and walked through the wall, and staff later found out that a doorway once existed in the wall where the girl disappeared.

One November night in 2006, a driver returning home from work reported passing a figure on horseback dressed in highwayman’s clothing, standing by the wall of the pub.

But when he looked in his rear view mirror, the figure had vanished.

Some people say that the highwayman is the ghost of Dick Turpin, with sightings going back to the mid-twentieth century.

A sandstone cave in the area is said to have been one of Turpin’s hideouts, which is why his soul may haunt the city.

A six-year-old Victorian girl who fell to her death on the staircase was said to have haunted this building during the twentieth century.

One story says the ghost is a doctor’s daughter and dates to when the building was a private residence. During one of the doctor’s dinner parties, the curious girl emerged from her top floor bedroom and tried to peer over the banister to see who was in attendance when she lost her balance and fell.

The girl could be heard ascending the staircase and was seen sitting upon a shop counter when a tearoom operated on the site.

During one of the outbreaks of plague in the city, a married couple contracted the disease and died, but their only child, a young daughter, remained uninfected.

The little girl shouted to passersby for help, but no one would believe that she was clear of the disease.

Their doorway was bricked up to prevent the plague from spreading, with the young girl and her dead parents still inside.

It’s said that the girl’s crying could be heard for days, until the house fell silent. The girl had eventually starved to death.

Now people have reported seeing the child looking from the window, and the cries of a young girl heard emerging from the building, even though it is empty.

A pale young girl with long curly hair has reportedly been seen observing funerals from the church door.

She’s said to be dressed in black with a swollen red face, and vanishes suddenly when approached.

Edge of the River Ouse

Legend has it that a person drops five white pebbles into the river when the Minster clock chimes one in the morning during the first of May, they see their past, present and future.

Other spirits seen on the river are that of a phantom rowing boat, and the shade of a drowned person who drifts the river banks.

The museum is believed to be home to a ghost named Sarah, who as a young girl lost her father’s keys to the city.

Sarah dedicated the rest of her life to finding them, and on completion of the task dropped dead of old age.

People have reported hearing rattling keys in the corridors of the museum as Sarah wanders through the building.

The remains of St Crux church now form the chapel that stands in the Shambles, where an on-duty police officer once heard funeral music playing from the building late at night.

As he went to investigate, the doors opened and people could be heard leaving the service – but there was no-one to be seen.

The church was said to have a couple more frequent phantom visitors, one of whom was a tall man with a pale face who would stare out of the windows in the early hours of the morning.

The other ghost took the form of a female figure in a shroud, and would follow people passing the church at night, either along Fossgate and vanish as when reaching Foss Bridge, or via St. Andrew Gate, fading away when nearing Spen Lane.

The sighting of a spirit at Theatre Royal is said to bring good luck to the performers.

The grey entity, known as The Grey Nun, has been spotted around the building, believed to have been bricked up alive for seeing angels when a hospital existed on the site.

Staff consider it a good omen for any production currently showing if the grey nun appears.

Other reports have said music has been heard coming from the closed theatre late at night, as well as sightings of a wraithy actor who died in a duel nearby.

In 1953 Harry Martindale was working on a ladder in the cellar of the building when a group of Roman soldiers walked past him along the old Roman Road which ran through the basement. Harry was so shocked that he fell from his ladder.

The man was able to describe the soldiers’ uniforms and equipment, and where they entered the basement, and never once chanced his story before his death in 2015.

Despite being told his description of the soldiers was wrong, and the uniforms and equipment did not match that which was used by the invaders, local archaeological discoveries later proved Harry’s observations correct.

Other ghosts that have made this house their home are that of a dog, a black cat, the spirit of George Aislaby, who was killed in a duel, and the ghost of Frank Green,  who converted the interior into what it is today.

The Tapestry Room is reported to have an oppressive atmosphere, with the story saying that the wife of a former owner murdered him after an extra-marital affair.

Yorkshire certainly has its fair share of spine-chilling ghost stories, with Greater London bustling with both the living and the dead. There have been 685 reported paranormal sightings, from the ‘Red Lady’ to the ‘Highgate Vampire’.

Lancashire finds itself the third most haunted country, with 529 sightings, famous for its shapeshifters and witches, like the group of Pendle witches executed in 1612.

At the other end is Rutland, England’s smallest county, with a total of six spooky sightings to date.