DENVER — On a recent Monday morning, Necole Lowe, the recruitment head for Prospect Airport Services here, sat behind a table at Denver Airport’s outdoor plaza, where a job fair was underway.

Prospect, which contracts with Southwest, Delta and Frontier to provide wheelchair attendants and baggage handlers in Denver, has a bit more than 200 workers on the payroll. Full staffing in Denver would be at least 250 employees, Lowe said.

In its effort to close that gap, the company has raised its lowest entry-level wage to $15.50 per hour from $14.50 per hour. Managerial pay has also been bumped up a dollar, to $19 per hour.

Approximately midway through this fair, Lowe is encouraged. “I have at least 10 resumes here,” she said. “I’m happy. Very happy.”

Job fairs such as this one have become commonplace at airports around the country in the past three or four months as airports and the myriad businesses that operate within them attempt to raise staffing levels to match the sudden ramp-up that occurred in U.S. air travel over the late spring and summer. But in this current tight job market, filling positions has been a challenge, especially on the lower end of the pay scale.

“Translating an interview or somebody who shows up with interest into them actually being employed is also difficult,” said Matt Cornelius, executive vice president for the trade group Airports Council International — North America.

On this day in Denver, approximately 30 employers, including the airport itself, United Airlines, the TSA, the Westin airport hotel, various airport shops and restaurants and others were looking to fill more than 700 positions.

“We’re pretty much back to pre-pandemic levels [of demand], with not as much staffing,” airport spokeswoman Alex Renteria reported.

Southwest recently said that challenges hiring groundworkers in six to eight key stations, including Denver, burdened its operation and played a role in its subpar on-time performance and cancellation rate through the first half of the summer.

Allegiant is another carrier that has attributed operational difficulties to staffing shortfalls at the contracting companies it uses for groundworkers.

Renteria said the various staff shortages in Denver are having only a moderate impact on flyers.

“You might need to wait in line a little bit longer at one of our restaurants because of the staffing. Just bring your patience with you,” she said. 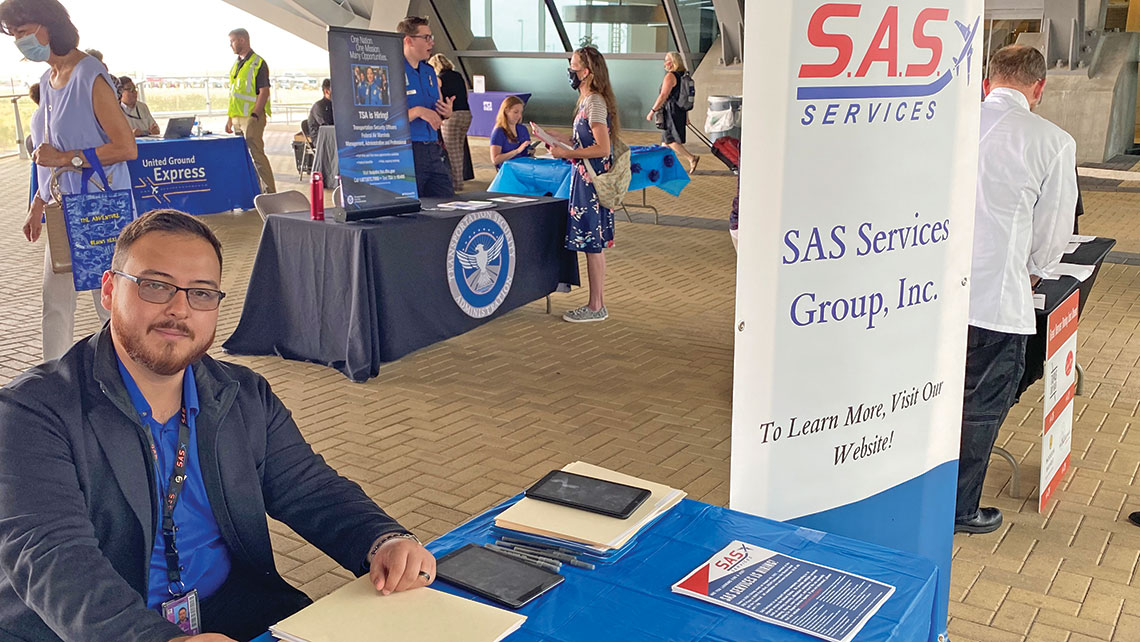 In Salt Lake City, for example, the airport says that employers — including the TSA, shops, restaurants and car rental companies — are struggling to find staff.

As a result, Salt Lake City is encouraging flyers to get to the airport extra early.

“The issue has also delayed the opening of some of the airport’s concessions,” spokeswoman Nancy Volmer said.
Rob Wigington, executive director of the Airport Restaurant and Retail Association (ARRA) trade group, said that he’s heard many tales of recent airport job fairs that yielded few results for concessionaires. One Florida-based airport concessionaire company told him that out of a pool of 400 applicants, they can expect to hire only four.

The ARRA doesn’t formally track the percentage of airport shops and restaurants that either remain closed or have limited hours or a limited menu, but he estimates the number to be about 30%. In some cases, hours are still shortened due to limited demand, but often staff shortages are the cause.

While hiring is a challenge for lots of service sector employers right now, airport-based companies face extra hurdles, both Wigington and Cornelius said. One problem is that many airports have remote locations. Another challenge is that any potential airport worker must clear federal background checks, a process that can take days or even weeks, said Cornelius. By the time those checks are complete, the applicant has often taken a similar type of position, perhaps closer to his or her home.

With restaurant and retail opening hours down at airports, hungry air passengers are often feeling the brunt — an issue being amplified by the especially difficult time airlines have had with operational reliability over the summer.

During the first week of August, for example, Spirit Airlines canceled more than 60% of its flights systemwide on consecutive days. Episodes like that leave thousands of flyers spending extra hours in airports, many gravitating toward whatever shops and restaurants are open.

“It certainly does impact the experience of the customer, and not in a good way,” Cornelius said.

Back in Denver, Prospect Airport Services is far from the only employer that has raised wages or begun offering hiring incentives in an effort to fill its openings. The management company that runs the airport Dunkin’ Donuts, for example, was offering $500 sign-on bonuses for cashiers.

Operations manager Paul Flores said the company made that move earlier than other concessionaires, and it paid off. All of the restaurants and quick-serve outlets under Mission management are operating full opening schedules.

Still, the company needed approximately 20 more employees at that airport.

For the job fair, Flores’ goals were modest.