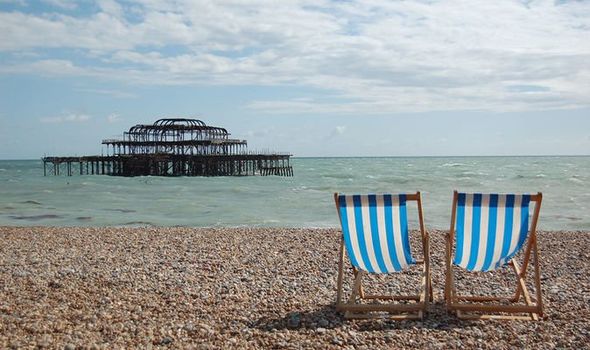 It comes highly recommended, as home of the Brighton pier and Brighton rock and the Lanes and the Pavilion and I don’t know what all.

It is famous for its thespian community: Laurence Olivier lived there. Graham Greene put it on the literary map. Brighton caters to all tastes: it is possibly the most right-on place in the country, if not the world, but there are some very grand houses indeed dotted around.

“Brighton rocks, geddit?” I said to my SB and so, packing a metaphorical bucket and spade, off we went.

We Britons do like to be beside the seaside and so we envisaged a boiling hot day under the beating sun on the Brighton sands, perhaps with a picnic of crab sandwiches, as we negotiated a spot among the crowds of holidaymakers in fine fettle after being cooped up for a year.

The first hint we had that not absolutely everything was going to plan came as the train pulled into Brighton station. As the door opened, an arctic blast swept through the carriage, not just temperature-wise but a gust of wind that felt like a force 10 gale.

“A nice refreshing breeze,” commented my SB as we battled through the wind to get to the taxi rank, conditions being far too harsh for a gentle stroll down to the beach.

There was an emergency stop at a shop to buy a pair of tights ‑ “I bet you don’t need to wear tights in Barbados in July,” I said forlornly. “Let’s go down to the pier.”

Brighton is a glorious city ‑ my SB spent part of his childhood in Kemptown ‑ but with the best will in the world the pier was not looking at its best that day.

For a start all the beaches had been closed and great big “Danger” signs had been placed along the edge. No lifeguards were around.

Humongous waves were crashing against the seafront. I bet the beaches in Barbados are open. “Come on, let’s go inside,” said my more patient than ever SB.

Had we been in a glamorous Caribbean resort, we’d have decamped to the casino. In Brighton we decided to take our chances with the slot machine, in which you entered 2p pieces in order to win more 2p pieces.

My SB proved annoyingly good at it and started accumulating a fortune. As in most of my attempts at financial endeavour, I was quickly wiped out. Next year, Rodney…

In Barbados, you swan around in cute little sports cars. At least one hotel has a Rolls-Royce at guests’ disposal.

In Brighton, there are dodgem cars. Unlike most of the other rides, which were temporarily closed due to violent weather conditions, the dodgems were still working, but there seemed to be a distinct lack of punters keen to get blown into what was now resembling tidal waves right under our feet.

There was a carousel, so I took a lonely spin on a fairground horse. Not quite the same as cantering through the surf in you-know-where.

“Let’s go fishing,” said my SB; in Barbados, you relax on the back of yachts while Ernest Hemingway types hoist great big tuna out of the sea. In Brighton, you perch at a little shooting gallery and take shots at distant waves to try to get your fish du choix to win the race.

My SB won easily and presented me with his trophy, a bright pink furry dolphin. In Barbados, of course, the dolphins only turn pink as they leap into the air to reflect the glorious sunsets above.

As we emerged from the gallery, there was a crash as a billboard blew over. No one was wearing a Kiss Me Quick hat, not least because they wouldn’t have stayed on.

As the rain lashed down, we retreated hastily into another gallery, where I was persuaded to see how strong I was by beating a hammer down on a plate: it took moments to confirm that in the strength stakes, a gnat could easily outdo me.

By this time we were in need of a little sustenance, having only managed to consume some candy floss since breakfast. Now Brighton has many lovely restaurants, but somehow we managed to end up with just a plate of chips.

But Barbados and Brighton do have one thing in common: you end up revealing a lot of yourself. In Barbados, this is because you are flouncing around in designer bathing suits; in Brighton, this is because the wind is so fierce it is whipping your dress up around your face.

I know it’s a problem Kate Middleton once had, but it’s not easy maintaining your modesty when your skirt seems determined to force itself away from you. Never would you have thought a silky piece of material would have such a mind of its own.

And yet, and yet… “Is this weather typical of Brighton?” I asked, as yet another Arctic blast went in one ear and stayed there.

“No,” said my SB brightly, “I’ve never seen it like this before.” But while we might have been in Brighton and not Barbados, there’s a certain charm in wandering around a British seaside resort with your SB, attempting to gulp down an ice cream at speed before the wind could knock it over while exploring the back lanes of what is a very charming place.

And then we discovered a delightful restaurant called Due South, which not only had a view out over the (closed) beach, but served English sparkling wine ‑ take that Barbadian champagne bar!

It proved conclusively that you can find lemon sole on the south coast that is every bit as good as Caribbean flying fish sandwiches. The South Downs and the Seven Sisters are on your doorstep. My pink furry dolphin totally overshadows anything you could see in the waters around Barbados.

We were even considering a return visit to revisit my SB’s childhood. And then the sun came out… making it a certainty.