Sunbathing on a deserted beach in Mallorca, Nicola Brett says she is having the “best holiday ever”.

The 31-year-old gym sales executive from York arrived on the Spanish island on a Ryanair flight on Sunday, hours after the government changed its advice against all but essential foreign travel. She was flying back at midnight on Thursday, just as the rules requiring those arriving in the UK to quarantine for 14 days were lifted.

“The airport was quiet and the flight was early,” she said. “It was great. And then [when] I got here there weren’t too many Brits getting drunk and I’ve been able to spend more time with the locals. There is hand sanitiser everywhere and they’ve made it really easy. I’d prefer if it didn’t get busier actually. I really like it being nice and quiet.”

Tourists are slowly beginning to make their way back to Spain’s Balearic Islands, which have been cut off to visitors for almost four months due to the country’s Covid-19 lockdown. It is estimated that 3 million Britons visit the region each year and tourism accounts for 35% of the islands’ GDP, compared with about 12% for Spain as a whole. 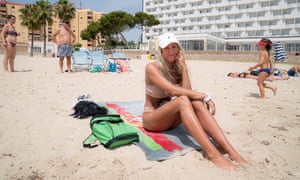 It is the first time in the six years that 35-year-old Xenia Mon has been a taxi driver that she has been able to get a tan. “Normally, I am pale because I am escorting tourists.” She usually works 12-hour days but this year has worked about 12 days in total and is desperate for the tourists to come back.

“On one side, yes, it is good. I have been able to go to the beach in the summer and I have been taking it slower. Life has been more relaxing because maybe in the past I worked too much,” she says. But Mon has hopes of one day being able to buy a flat in Palma and, she adds, “without the tourists we cannot eat”. “We need them.”

At this time in the season, the Mallorcan resort of Magaluf’s infamous Punta Ballena strip would normally be heaving with young Britons and Germans, with its numerous neon-lit bars. But on Wednesday night it is quiet. Crystal’s Bar is one of only three open and no matter how loud a group of Glaswegians sing their folk song, it is clear the younger tourist contingent are struggling with this new normal. 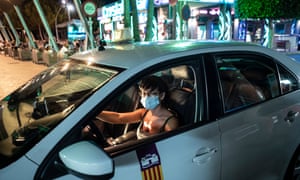 “Yeah, being here is better than being at home, but we’re desperate to dance and we’re not allowed to,” say two young friends from northern England. “It’s all table service because of social distancing and so we don’t get too close to each other. It’s a bit boring to be honest,” they add.

On Monday the Balearic Islands’ regional government announced it would follow in the footsteps of Catalonia by making it compulsory to wear face coverings in public spaces outdoors, though beaches and hotel pools are exempted.

Diego Belmonte, the owner of the Chippy pizzeria and takeaway in Magaluf, is frustrated at what he describes as arbitrary rules. “Young people want to come here and have fun. What’s wrong with that?” he says. “The problem at the moment is the government and not the tourists. We’ve been told we have to close at 2am – I have a 24-hour licence – and then they won’t allow the clubs to open. And now the face masks. They want [a] different type of English tourist but I like the ones we have. I don’t care if they are aggressive, break glasses. I love them!”

But for Eduardo Gamero, the president of the Fomento del Turismo de Mallorca, a non-profit association that represents the tourism sector on the island, it is simple: the Balearic Islands have so far managed to stave off a high number of coronavirus cases and he would like to keep it that way. In Spain Covid-19 has killed more than 28,000 people and infected more than 253,000; on the islands there have been 2,228 confirmed cases and 224 deaths.

“I know this is not quite as it was before but we need to take greater care and try to avoid anything which may lead to excessive deaths. People need to behave as they would in their own country. We want tourists to return but just because they are on holiday they shouldn’t behave differently. They need to respect their environment. We all need to survive this pandemic.”

Marc Fosh, a chef from Kent who has lived and worked in Spain for more than 20 years, agrees with Gamero.The 56-year-old, who closed the doors to his eponymous Michelin-starred restaurant in Palma on 14 March, said the situation had been a double-edged sword for many in the hospitality industry.

“As you’d expect there are very mixed feelings because we don’t want another spike – this year has been all about damage limitation,” he says. “We would like tourists to start coming back but it has to be done safely. We are lucky in that we are in a bubble in Mallorca and we will be able to bounce back this time, but no one can afford another lockdown.”