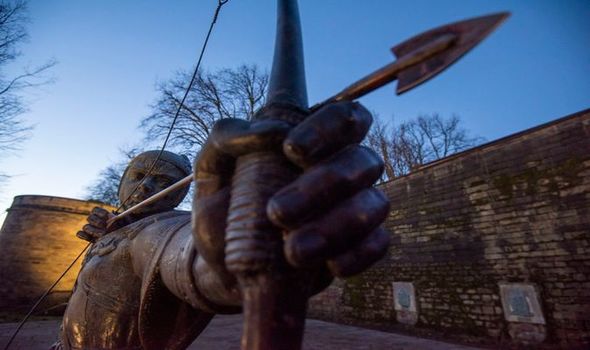 Still, the efforts of Snot’s people are certainly not to be sniffed at today (oh, come on!) as this gem of a city in England’s East Midlands region is now a truly fantastic weekend city break and staycation destination. So, let’s get the man in Lincoln Green out of the way without further ado. Robin Hood is written into the DNA of this city. He’s everywhere. And with good reason, Robin and his Merrie Men are A-List English legends – up there with King Arthur and Sir Alf Ramsey – men who accomplished such incredible deeds one is never quite sure if they can really be true.

Robin seems to have emerged, robbing from the rich and giving to the poor, in ballads sometime in the 14th Century. Later, he is linked to that legendary 12th Century English monarch Richard the Lionheart (a French chap who spoke not one word of English and almost certainly never actually set foot on British soil as it turns out).

Further characters, Little John, Will Scarlett and eventually Maid Marion, emerge much later in the 15th and 16th Century. Then of course Hollywood takes up the tale in the 1930s and from Douglas Fairbanks to Kevin Costner and from Errol Flynn to Russell Crowe the Robin Hood story is leant all the painstaking authenticity Hollywood is famous for.

What we know for certain though is the nasty Sheriff of Nottingham really did exist and he really did live in Nottingham Castle. Which is why this beauty should probably be at the top of your must see list.

The Castle has just re-opened after a £30m re-furb and is bristling with history cleverly disguised as fun.

Take Robin on at archery, fight with Little John, and delve into the caves deep below (a developing theme as you’ll see..). And take some time both for the transitory exhibitions and the permanent ones, especially the “rebel” exhibition.

By the way if the caves have tickled your fancy end your visit with a pint of foaming ale at the 12th century Trip to Jerusalem pub next door. Carved into the actual Sherwood sandstone on which the castle stands it’s one of my favourite pubs in the whole of Britain.

Second on the must do list should be the National Justice Museum. Now I know what you’re thinking… “that sounds teeth-grindingly tedious” – exactly as I did.

But you could not be more wrong! They really should rename it the National Museum of Torture, or the National Ripping Out Bad Guys’ Innards Exhibition Centre… because this gripping and slightly stomach-churning journey through the history of Britain’s grim and bloody attempts at law and order will leave your head spinning and your jaw dropped!

It’s one of those super rare museums you actually wish was bigger. And it’s absolutely fascinating.

And handily placed, just a quick pint away, is the City of Caves.

Nottingham is built on more than 500 caves – and this exhibition takes you through a few of them, explaining how important they have been to Notts folk from the Crusades to the Blitz. Moody and atmospheric, and just the right length to allow you to be wowed by the history.

And talking of being wowed, to soak up the feel of this city, both its deep history and its rather cool present, you could do a lot worse than book a walking tour with Ezekial Bone.

Mr Bone, clearly a compatriot of Robin in full Lincoln Green, will take you on a warts and all trip around the city, sword-fighting, singing, and frankly proclaiming on all things Nottingham.

The Sherwood Forest rebel (actually actor Ade Andrews) brings a fascinating, touchable, insight to everything from the bigger picture stuff (the lace industry, the munitions making, the city’s imperial heft and household names Raleigh, Boots and Imperial Tobacco) to the micro-details like the little additions to Nottingham town houses which deter drunks from taking a night-time leak!

Nottingham is a city which feels at ease with itself, and a walk with Ezekial (and yes a pint or two half way through) is a great way to appreciate that vibe.

If you are in the market for an easy city getaway with great food and drink and plentiful shopping all wrapped up in a very unique sense of its own place in history look no further than Nottingham.

Jury’s Inn Nottingham, Station St, Nottingham NG2 3BJ: Practially on Nottingham Station this modern hotel is a perfect base for exploring the city.

Boulogne-Sur-Mer: A quick hop across the Channel for the perfect winter break

Travel back to Victorian times with a fun trip to Ironbridge