Watching Italy’s coronavirus agony unfold was unbearably sad for those of us who love this exuberant, gregarious country. But as the months went on, I began thinking more selfishly: Italy was coming back to life, but would the UK’s chaotic response to the pandemic deprive me of my Italy fix this year? 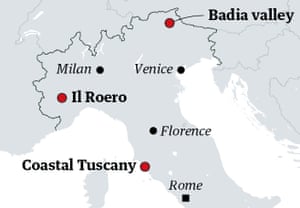 Now, with plans to lift the ban on non-essential travel afoot, things look more hopeful. But where to go? Busy cities don’t appeal, nor do Italy’s regimented beach resorts. With lots of Italians holidaying at home this year, quiet corners will be rare, but here are three worth trying.

The South Tyrol region is a good choice for those who cross from Hull or Harwich to the Netherlands, with fast train or motorway routes through Germany and Austria, and no need for the long slog down through France. To the east of the A22 autostrada south of the Brenner Pass, the wide, sunny Val Badia sits beneath imposing Dolomites summits.

A popular winter sports area, in summer it offers dreamy walking and cycling routes, including in two natural parks – Fanes-Senes-Braies and Puez Odle. Dairy and fruit farming is as important as tourism here, and there is plenty of farm accommodation – self-catering and otherwise. The valley’s cute villages offer the added interest of an insight into little-known Ladin culture. While much of the South Tyrol is bilingual German/Italian, here there’s a third tongue, Ladin – evolved from the vernacular Latin – and ancient traditions most visible in intricate woodcarvings. Bun dé is how locals greet each other, and the Nos Ladins initiative allows visitors to spend time with “Ladin ambassadors”. 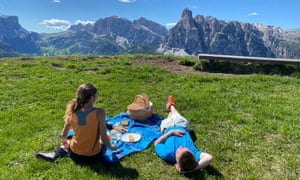 Ski lifts in the area reopened for summer last weekend. For a perfect family hike – spectacular but not too demanding – take the Pralongià chairlift from Corvara for a waymarked 7.5km circuit of the Bioch-Arlara plateau (details at altabadia.org). Children will enjoy the free Spaghettino park, dedicated to the mountain’s creepy-crawlies at the 2,200-metre Pralongia Ütia (Ütia is Ladin for Italian rifugio or German Hütte). At the other end of the scale, for experienced climbers only, is a 25km, 10-hour circuit of the 4 Peaks Alta Badia.

The small town of San Vigilio di Marebbe makes a good base. Family-run B&B Les Gomines (doubles from €90, three-night minimum) is on the edge of town, handy for walking trails in Fanes-Senes-Braies park. North of Corvara, with panoramic Dolomite views, Agriturismo Lüch Cianins has apartments for two or four from €51 a night. 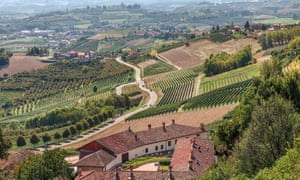 The Langhe area is home to the famous wine town of Barolo, and justifiably popular. Less well-known is its northerly neighbour Il Roero, a rolling landscape of vineyards, orchards and woods dotted with canyons called rocche – gorges up to 100 metres deep carved by the River Tanaro. Waymarked routes, on old peasant tracks, from the village of Monteu Roero take in several rocche, plus steep groves of ancient sweet chestnut trees.

The layers of soil and rock that give Roero’s excellent red, white and sparkling wines their flavour can be seen in the vertical sides of the rocche, so round off a walk with a tasting. Most wineries are open, but tours should be booked online in advance: try Angelo Negro. 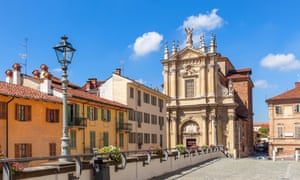 It’s not just wine that is excellent here: the town of Bra seems unassuming in comparison with neighbour and truffle capital Alba, but it is where the Slow Food Movement started. And it shows: its historic centre is stuffed with family-run shops selling artisanal everything, from sausages to chocolates. Just outside in Pollenzo is the movement’s University of Gastronomic Sciences, with a “wine bank” that offers free tastings (book online in advance). Masks have to be worn in all public spaces in Piedmont.

Dine and sleep amid the vines at Agriturismo Cascina Vrona (doubles from €85 B&B), which has a swimming pool with panoramic views. Those who travel by train (Bra is on a direct line from Turin) could stay at the bright pink Nuovo Hotel Giardini (doubles from €75 B&B) in Bra, and hire an e-bike from Tecnobike on Piazza XX Settembre to tackle the Roero hills and a riverside trail by the Tanaro to Alba. 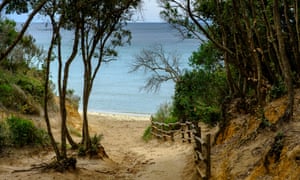 The beaches of the Italian Riviera tend to be narrow, as they are often tucked under steep hills. For more spacious sands, it pays to push on down the peninsula into southern Tuscany and the coast near the walled city of Grosseto. Its seaside suburb, Marina di Grosseto, is not particularly attractive but has miles of soft sand stretching south into the Maremma natural park. Former fishing village Castiglione della Pescaia is prettier, with an old harbour beneath the walls of a 15th-century castle. There is plenty of sandy beach north and south of town – but you have to pay for sunbeds and umbrella in the nicest spots.

For a more British-style beach experience – where you tote your own towels, umbrella, drinks and food – it’s hard to beat Punta Ala, on a little headland up the coast. Its two kilometres of free beach backed by pine and oak woods have pale sand sloping into calm water, and views of Elba on a clear day. 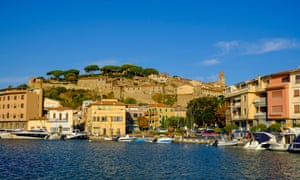 Trekking the Sabine Hills: in praise of Italy, summer and freedom

Of course such natural glories don’t go unnoticed: parking in Punta Ala is expensive, and there’s a very exclusive resort on the end of the headland. A 12-minute walk from the beach, however, Albergo Punta Ala has a palm-shaded garden, basic breakfasts, and doubles, some with balcony, from around €135 in mid-July (two-night minimum). But why not embrace the seaside vibe with a caravan stay? Campeggio Baia Verde, right on the beach, has mobile homes sleeping five from €85 a night after 24 August (though twice that earlier in August). A cheaper option is a parked touring caravan for four, with chemical loo, for €65/€120 a night.

Boulogne-Sur-Mer: A quick hop across the Channel for the perfect winter break

Travel back to Victorian times with a fun trip to Ironbridge