Home » Holiday » Boys in the wood: family mountain biking in the Sussex forest

‘Was he as tall as that tree?” asked my wide-eyed seven-year-old, his imagination on overdrive as he pointed to an ash tree at least eight storeys high.

“Hmm, a bit less than that,” answered our guide, who was fielding questions from my kids about the time he faced a grizzly bear on a mountain-bike trail in Canada.

“Yes, he could have killed me. No, I wouldn’t have been able to ride away fast enough, grizzlies can run at 35 mph.” And, to my nine-year-old glancing over his shoulder, “I’m pretty sure you don’t get bears in these woods.”

We were somewhere inHoughton Forest, West Sussex, on a mini mountain-bike adventure with Jim Barrow of Marmalade MTB. Our trip was as a break from home-learning, but the chance to get outside and expend energy will hold as much appeal in the school holidays, especially for families looking for post-lockdown activities in the UK. My boys were so excited they wore their bike helmets the whole way there in the car.

From our meeting point at Amberley, near the station for easy access, we had the choice of riding up a hill to the South Downs Way (which would probably have broken the younger one) and a leisurely ride meandering along the river to Arundel. But as it was wet and windy Jim suggested a short drive to Houghton Forest, which would be more sheltered, and offer a good mix of terrain, none of which would be too steep for our level (rides are tailored for ability and experience, discussed in advance). 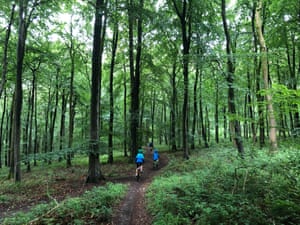 While the usual group rides of up to eight are currently suspended, private guiding for groups of up to five is allowed. A morning with a private mountain bike guide costs less than three tickets to Legoland – and in my opinion is more enjoyable and just as adrenaline-packed. On Jim’s tail we darted between trees, ducked below brambles, bounced over roots and raced down spongey tracks.

During the entire ride, we saw just one other person. You can, of course, go cycling without a guide, and we have ridden lots during lockdown, but what’s special about this is how deep into the forest we went, on seemingly secret trails Jim has been riding for almost 30 years. He also gave the boys plenty of tips along the way, such as looking at the gaps between the trees not the trees themselves, and to angle their feet upwards on their pedals for added stability.

Every now and then I’d stop and let them go ahead, so I could have a moment of peace to look up at the forest canopy and breathe it all in. When I caught up, they’d be asking him more about his mountain-bike adventures, hanging on his every word. I knew they’d love the cycling, but I hadn’t appreciated how much they’d enjoy the company of a bike-loving adult, an elder who wasn’t a parent or family friend. A role their schoolteachers or football coaches would fulfil in normal times, and something I’m fairly certain you don’t get from a trip to a theme park.

• Marmalade MTB runs private guided group rides for four or five people from £30pp; date for mixed group rides tbc. Half-day Intro to MTB sessions across the South Downs and Surrey Hills for an adult and two children (normally 8 and above) from £120 for three hours The writer hired a bike through Chalk Pit Trails for £30 (Marmalade helps with hire depending on the location) and took her children’s own Frog bikes

Hill Walking in the Brecon Beacons 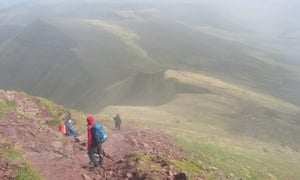 Escape the crowds with Treads and Trails, whose mountain guides take families on hiking routes amid tranquil landscapes away from the main tourist spots of the Brecon Beacons. The gradient and difficulty can be tailored to the ability and energy levels of the group.
• Suitable for kids aged six and above, £100 for a family of five, treadsandtrails.co.uk

Kayaking in Cornwall
Retrace a historic smuggling route on a guided kayak trip along Frenchman’s Creek, a peaceful inlet off the Helford River near Falmouth. Double kayaks are a great way to get younger kids involved without tiring them out too much. Enjoy views of ancient oak forests along the banks, look out for the odd glimpse of a shipwreck and have a swim on a secluded beach at the end of the tour.
• Suitable for kids aged six and above, £180 for a family of four including kayak equipment, and wetsuits if required, korukayaking.co.uk

Caving in the Peak District 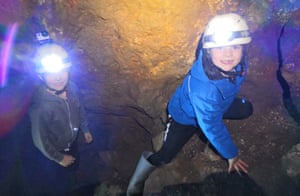 Explore caverns, hidden river networks and prehistoric relics with a local guide who knows the way around Derbyshire’s limestone cave system better than some people know the world above ground. Trips are tailored to each family; they can be leisurely, with a focus on historical and geological interest, or exciting, athletic and adventurous.
• Suitable kids five and older, £120 for a half-day for a family of four with all specialist equipment provided, gritstoneadventures.co.uk

Surfing in Northumberland
Learn to surf as a family at Bamburgh or Druridge Bay, two of Northumberland’s golden sandy beaches, which are so picturesque you might easily forget you’re on the North Sea – until you hit the water. Northside Surf is a friendly surf school, run by Surfing GB Coach Jon Nolan. The school also offers paddleboarding lessons.
• Suitable for kids aged eight and above, surf lesson for family of four with all equipment included is £100 (family paddleboarding lesson £135), northside-surf-school.co.uk

Tree Surfing in Devon
Enjoy a primate’s perspective of a woodland as you navigate your way through the trees via a network of high rope bridges, ladders, wobbly walkways and zip wires, all at a knee-knocking 15 metres off the floor. Tree Surfers is located at the Tamar Trails, where you can also walk, run or cycle around 25km of forest paths.
• Suitable for kids aged 12 (or 1.5m tall) and above, £84 for a family of four, treesurfers.co.uk