Claim to fame
Undoubtedly most famous for being the first European woman to visit Lhasa in Tibet, Alexandra David-Néel was also a runaway, an anarchist, an opera singer, a Buddhist scholar, a pioneering traveller and a prolific author. Her extraordinary life lasted more than a century. One of her earliest memories was the bloody aftermath of the Paris Commune in 1871; she died just a few weeks after Jimi Hendrix played Woodstock, living long enough to see her unconventional personal philosophy – “No commandments! Live your life! Live your instinct!” – enter the cultural bloodstream of the west in the 1960s.

Almost as a side note, she helped run a casino in Tunis, sang at the Hanoi opera house and studied Buddhist texts at the British Museum. In middle age, she married a wealthy Frenchman, Philippe Néel de Saint-Sauveur, whom she promptly abandoned to spend 14 years travelling around India, Tibet, China, Nepal, Korea, Mongolia and Japan. In Tibet, she met a 14-year-old monk called Aphur Yongden, whom she adopted in 1929. He was her companion for 40 years. 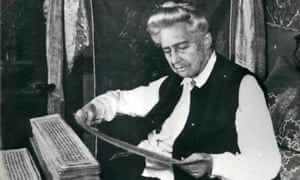 Supporting documentation
David-Néel wrote anarchist pamphlets, travelogues and scholarly studies of Buddhism, Hinduism and Taoism and her own translations of Tibetan scripture. Her most famous work, My Journey to Lhasa, recounts her visit to the Tibetan capital in 1924 – at a time when it was closed to outsiders. In order to sneak in, she had to disguise herself as a Tibetan, lengthening her hair with a yak’s tail and dying it black.

Distinguishing marks
The photographs taken across many decades show a person with as many avatars as a Hindu deity: society belle, wanderer, orientalist, monk, sage and, in her last years, lovable Yoda figure.

Last sighted
Outliving both her husband and Aphur Yongden, her adopted son, she spent her last years cared for by her secretary, who, on her death, scattered David-Néel’s ashes in the Ganges at Varanasi.

Intrepidness rating
David-Néel seemed to compress the contents of many existences into a life of almost unimaginable unpredictability and richness. She was still exploring China and Tibet in her 70s and, aged 100, renewed her passport “just in case”: 9.