Silversea confirmed the delivery of the Silver Moon on Oct. 30, the second ship to join the luxury fleet in 2020 amid the pandemic, and is tentatively scheduled to enter service on Nov. 8, 2020.

The Silver Origin was delivered on June 3 and, at this time, is scheduled to depart on its first revenue cruise in the Galapagos Islands Nov. 7.

The 596-guest, 40,700-gross-ton Silver Moon – the sister to Silver Muse – underwent sea trials Aug. 8-20 with a reduced crew of approximately 320 due to precautionary health protocols, the ship journeyed between Fincantieri’s shipyards in Ancona and Trieste, Italy, undergoing a week-long dry-dock period in the latter.

Silversea’s senior officers, external engineers, and representatives from both Fincantieri and parent company Royal Caribbean Group put Silver Moon through a series of preliminary tests in the Adriatic Sea – including noise and vibration tests – for three days.

Once Silver Moon was out of the water in Trieste, stability tests were performed, public spaces were inspected, and engineers applied the finishing touches to the ship’s exterior, including the cleaning and painting of the hull, and the polishing of the brass propellers.

Secondary tests, including speed tests, were then carried out on the return sailing from Trieste to Ancona. Work has now restarted on the ship’s interior.

Silver Moon’s master is Capt. Alessandro Zanello, who has over 20 years of experience at Silversea alone. He was at the helm for the launch of Silver Moon’s sister ship, Silver Muse, back in 2017, and was also present for the sea trials of Silver Spirit in 2009.

“As my third with Silversea, I must say that Silver Moon’s sea trials felt a little surreal after everything that happened in the months prior,” Zanello said. “I was originally scheduled to travel to the shipyard in Ancona in April. I was with family in Canada at the time. Unfortunately, there were no flights from Canada to Ancona, so I was unable to reach the ship until July. The sea trials themselves felt special, indeed, and were held in unique circumstances.

“Enhanced health and safety protocols were in place, including temperature screenings, physical distancing, and the wearing of face coverings both on the ship and in the shipyard,” Zanello continued. “Meal hours were extended and we ate with fewer people in the restaurant. During the sea trials themselves, we had far fewer people on board than for those of Silver Muse. Safety was the primary concern. Nevertheless, we managed to carry out all test successfully. … At the end of the sea trials, we shared a celebratory glass of prosecco with the team from Fincantieri. The ship is coming on nicely and she really is looking spectacular. This is a momentous occasion for all of us; we have worked very hard to reach this point.” 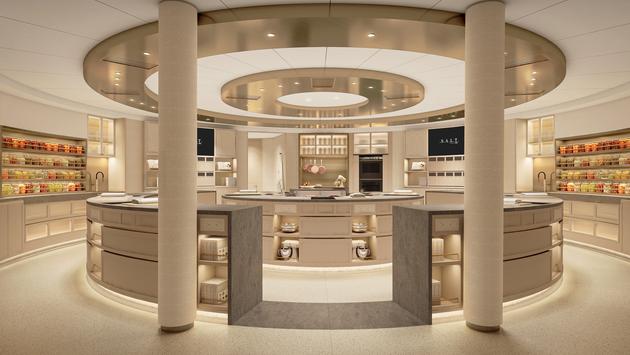 Roberto Martinoli, Silversea’s president and CEO, said Silver Moon will be “an innovative addition” to the fleet.

“Building on the success of our beloved flagship Silver Muse, Silver Moon will push boundaries in travel to unlock meaningful experiences for our guests around the world. Our pioneering new S.A.L.T. program is just one way in which travelers will delve deep into destinations, and I look forward to personally welcoming our guests aboard Silver Moon in the near future,” he said. “The fact that our beautiful Silver Moon nears completion, despite such challenging circumstances, is a testament to the exceptional resilience and expertise of all involved in her build. For this I am very proud.”

The Fincantieri shipyard in Ancona, renowned for its innovative approach to shipbuilding, will remember Silver Moon as its first ship delivered after the lockdown, as sign of Italian resilience and capacity to overcome difficulties.