ONBOARD THE DISNEY WISH — World-class shows have always been one of Disney Cruise Line’s greatest strengths, but with the recent debut of the Disney Wish, the company is pushing the entertainment envelope even further.

“Entertainment is the DNA of Disney,” said Ed Whitlow, the line’s director of artistic and talent casting, during a panel held as part of the Wish’s inaugural sailing in June.

“And it’s absolutely something that’s got to be in every corner, around every corner,” he added. “It’s so great to see every venue with some element of stage.”

Some Wish venues have a more traditional stage element than others. Take, for example, dinner theater: The ship’s “Arendelle: A Frozen Dining Adventure” offers what Disney calls a “theatrical dining experience.”

According to Whitlow, the Arendelle restaurant raises the bar on the success Disney has had with previous dinner-and-a-show concepts like “Rapunzel’s Royal Table” and “Tiana’s Place,” which are aboard the Disney Magic and Disney Wonder, respectively.

“Those were built years and years ago and were not created with an infrastructure for entertainment, but Arendelle was,” explained Whitlow.

Arendelle’s centerpiece is, in fact, an elevated stage, which is surrounded on all sides by dining tables, theater-in-the-round style. That doesn’t mean that the entertainment — which features musical appearances from “Frozen” favorites like Elsa, Anna, Olaf and more — sticks solely to the stage. Characters also take breaks to weave through the audience, interacting with diners and creating a more intimate experience. 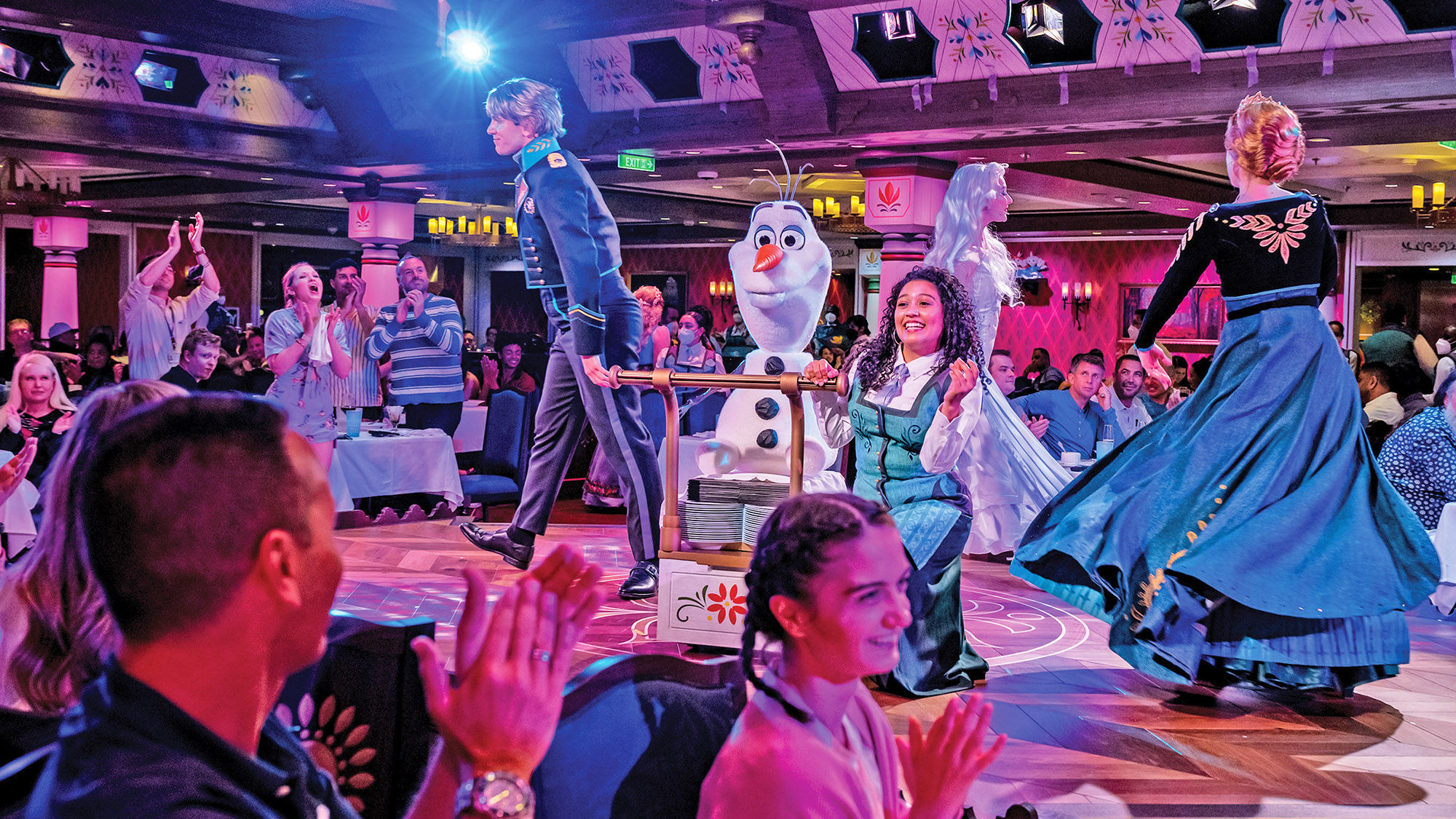 A classic stage is also the star of the Wish’s Grand Hall, the ship’s atrium equivalent. But as with Arendelle, the Grand Hall’s entertainment programming can extend well beyond the boards.

Denise Case, Disney Cruise Line’s director of entertainment creative, described the Grand Hall as an “environmental theater,” with characters, storytelling and interactive experiences able to pop up throughout the space, which is inspired by fairy-tale castles.

“We knew that we could do more than just meet-and-greets,” said Case. “It just opened up a world of possibilities for us.”

One of the Grand Hall’s more memorable interactive moments involves wishing wands, which are distributed to children on the ship. On the first night of each sailing, children are invited to participate in a wand ceremony to “wake up the enchantment of the Grand Hall,” which comes alive using special lighting effects, according to Case.

In addition to the Grand Hall, the Wish’s upper decks have received a redesign that similarly puts entertainment at the forefront. To give guests better vantage points from which to enjoy shows like the Wish’s “Set Sail on a Wish” sail-away deck party, Disney Cruise Line opted for a tiered pool deck.

“On our other ships, it’s a little bit more flat,” said Whitlow. On the Wish, “it feels like a true amphitheater.”

It’s more than just the ship’s entertainment-focused spaces, however, that have undergone a complete rethinking. 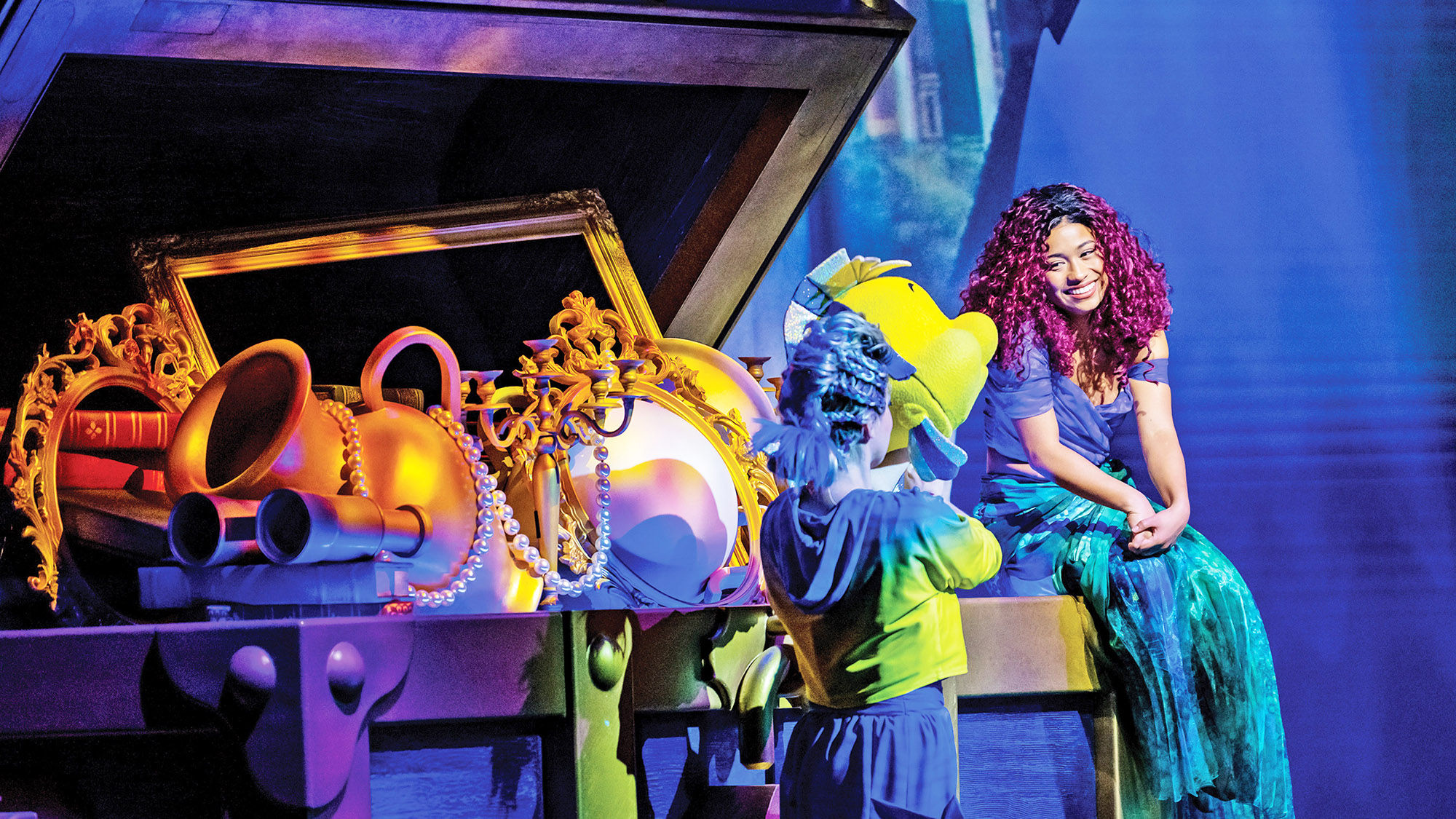 One of the biggest undertakings for the Wish’s entertainment team has been the development of a stage musical adaptation of one of Disney’s most beloved animated films, “The Little Mermaid.” The show, which previewed select scenes during our sailing, features Broadway-caliber sets, special effects, choreography and vocals.

Of course, the biggest challenge inherent in reinventing any Disney classic is pleasing those audience members who love the original, while still adding fresh elements. In a departure from the film, for example, the stage version of “The Little Mermaid” puts a more “soulful” spin on the character of Ursula, the story’s villain, highlighting her glamour and confidence.

“When you go to adapt something like [‘The Little Mermaid’], your first job is to not lose the things that people hold dear,” said Sara Wordsworth, show writer for Walt Disney Theatre. “As many of the adults walk into the theater, they have a long relationship with this story.

“But I also walk into the theater holding the hand of my daughter, and she’s going to have her relationship with it. [It’s about] how we’re going to bring this to the stage to meet all those expectations — but also what’s in it for the next set.”